Following up a Top 10 finish in his first 2012 event at the Humana Challenge, Bridgestone Tour Team member, Brandt Snedeker, rode the new TOUR B330 golf ball to a second hole sudden death victory at Torrey Pines on Sunday, after overcoming a 54-hole seven shot deficit to force the playoff. Snedeker’s Farmers Insurance Open win marks the third PGA TOUR title of his career, with all three coming in dramatic come-from-behind fashion.

During the 2011 offseason, Snedeker began testing the new B330 family of golf balls with Bridgestone’s ball-fitting experts. The results of the testing surprised Snedeker himself, and led to his playing the new TOUR B330 (the first time he used aball other than the B330-S during his professional career) to start 2012. Little did he know then, that his decision to switch balls would be validated after just his first two events of the 2012 PGA TOUR season, entering the winner’s circle at the 2012 Farmers Insurance Open in La Jolla, California.

While at the PGA Merchandise Show, THP got a chance to speak with Bridgestone Golf about the new ball line and the improvements that have been made.

“The new B330 ball gives me more length off the tee, more consistency in my ball flight and just the right amount of spin I need on and around the green,” said Snedeker. “After going through a ball-fitting with Bridgestone in December, I switched from the B330-S to the new B330, as I found that the new B330 provided me with the exact performance my game demands. Ball-fitting works and it can help golfers of all skill levels find the best ball for their game.”

Snedeker finished the week T2 in Birdies (24), T3 in Putts Per Round (27.5) and T8 in Putts Per GIR (1.686) leading to a 72-hole score of 16-under par. During his crucial Final Round charge, Snedeker relied on the increased consistency and spin performance of the TOUR B330 and the precision shot-making of the J40 Cavity Back irons to hit an incredible 17 out of 18 greens in regulation.

Bridgestone’s new TOUR B330 ball features the company’s proprietary Dual Dimple Technology cover for optimized aerodynamic performance. The cover’s smaller inner dimples increase thrust power at launch for greater distance while the larger outer dimples promote a shallow angle of descent for increased roll out on landing. The result of the improved performance at both takeoff and landing is greater overall distance performance and more consistency in flight.

In addition to enhanced aerodynamics, the new B330 also contains a larger core than before. Like a car’s engine, the core is the powerhouse of the golf ball. By gaining size in the core, the ball’s velocity is increased and its distance performance maximized. 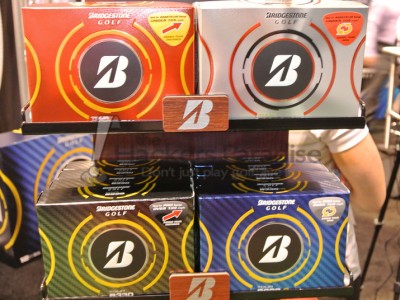 The newly enhanced spin performance is a product of the ball’s softer Urethane cover. Compared to the previous model, the Urethane cover of the B330 is 6% softer. The resulting softness produces maximized spin and control on and around the green and enhanced durability throughout the round.

“Brandt is off to a fast start to the 2012 season, and the way he is striking the ball right now, sky is the limit,” said Dan Murphy, Vice President of Marketing – Bridgestone Golf, Inc. “We are glad for our tour team to get its first win while still on the West Coast Swing, and to have it happen the week we launched the new balls at the PGA Show, is just unbelievable. We cannot wait to get the new B330 family into consumers’ hands this spring.”

The new B330 balls feature a street price of $44.99 per dozen (MSRP $58.00 per dozen) and will be available March 2012 at golf courses and golf specialty and sporting goods retailers nationwide. For a rundown of all the Bridgestone gear in Snedeker ’s bag see below.

Join the discussion on the new Bridgestone golf balls in the THP Forum here.