Nike Golf made a bold statement when it first introduced a new innovation in its premium 20XI golf balls called RZN. The new proprietary RZN technology resulted in a lighter, faster and more responsive core that is engineered to produce longer distance and more controlled shots.

Nike Golf has taken this technology a step further by adding more RZN to its new 20XI ball, available on February 1st. With more RZN material added to the core and mantle of the golf ball, Nike Golf engineers have created an even faster engine for ultimate tour performance. 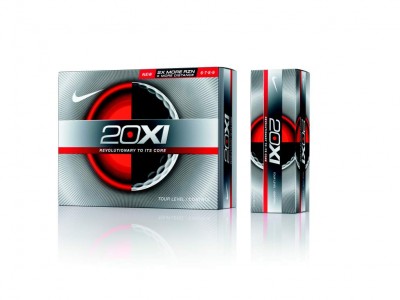 “The added RZN mantle provides faster speed off irons and, therefore, more distance,” said Rock Ishii, Nike Golf’s Product Development Director for golf balls. “Not only did we increase speed with 20XI, but we added softness for improved feel around the greens, creating a balanced tour model golf ball.”

The 20XI will be available in two versions, the 20XI and the 20XI X. While both balls deliver faster speed and high levels of MOI, the 20XI ball is designed to improved feel and enhanced short game control. 20XI X delivers maximum distance, improved feel and reduced spin for greater accuracy off the tee, making it the longest tour model Nike Golf has ever created.

I have no clue why, but I’m somewhat skeptical about this line of golf balls. I need to try them myself on of these days.

I have never played the Nike series of balls but it is interesting about the technology that they speak to in their descriptions of these new offerings.

Would be curious to see if the 20XI X has enough feel around the greens to be a normal gamer along with the added distance off the tee.

I have to admit I’ll likely wait and see with Nike balls until I see Tiger playing them. I played a dozen of the original and didn’t like them. I know Tiger uses an unavailably soft ball, but think if quality were close he’d be convinced to use the new ball. Not a Nike hater either, I love my pro cavities. Of course, I’m open minded and once the reviews start coming in if people say they’re head and shoulders above other balls I might give a sleeve a chance 🙂

I have been meaning to give these a shot for awhile. maybe some positive initial thoughts would push me to finally buy a dozen and give them a try.

I’m pretty excited to see these coming soon, I’ll definatelt give them a try. One thing I have noticed though recently is that here in the windy season I’ve seen a lot of ballooning with the Nike balls where as I didn’t see that with my previous ball. It will be interesting to see how these compare.

I’m really looking forward to trying these as well as reading about THP testing if/when that happens. I’ve mostly played the Tour One D, which got phased out. And, my impression of the current 20XI’s was that they had great distance off the driver. But, poor distance off the irons. From what I’ve heard, Nike has figured out the compression issue related to irons and fixed it with this new version.

“20XI” was a stupid naming convention, now they have the 2013 version of the 2011 ball, stupid stupid stupid… wasn’t anyone thing ahead over there?

Honestly I’ve never hit a 20XI golf ball before. I want to, just haven’t gotten around to it. I will definitely check one out soon though. Looking forward to seeing if they’re any good.

I like the old model and am looking forward to trying the new model once released. I like more RZN on my breakfast toast.

If this is all true I would like to see how they stack up next to my favorite ball right now, the Bridgestine e6. I’m willing to give it a try.

But I loved the ballflight and spin of this year’s ball so hopefully it is as improved as I hope.

Although I’ve never been a player of nike balls , these have me interested . I may have to pick up a box .

I’ve played several lines of Nike balls, but never this one. They really need to update the name though.

Interesting to say the least, as are all golfers I am always looking for a little more distance without sacrificing control.

No doubt this is all being timed for the beginning of Rory McIlroy arriving at Nike.

I’m curious has anyone hear tried these balls and how they compare to the Titleist Pro V1x which I have used for the last 5 years?

I dont know why people ball on the 20XIs. They are easily the best ball i have ever played. It plays as long as anything Ive played including the provs and the 330s. It checked up on the greens as well as any ball out there and had an extremely soft feel at impact. Im excited to get my hands on the 2013 version

Will we be able to test these at all before they come out?

I am an avid hacker with a 14 handycap. Played the 20xi-s for 10 rounds this summer and found that my slices were now fades and distance is not an issue. This ball holds it’s line better than any ball I’ve played to date. My game has no lack of distance so for me the 20xi-x and will probably not do it. I hit a mid-trajectory ball and thus require the extra spin to stop the ball on greens. I’m sold on these Nike balls.

Nike has my attention. If the world doesn’t end tomorrow I will covertly continue my count down to February.

Hope the new version will be better than the original which I found distinctly average in all catagories. I agree with the previous comment about the 20XI “ballooning” off the irons. It would take something special to tear me away from Pro V1 or B330S which excel where it counts.

I have tried the 20xi, both s and x, it’s a great ball when the temperature is 60+, but I play a lot in the winter, and side by side comparison on multiple rounds during colder weather, the 20xi lose a full club plus distance than either my usual prov1x, or srixon zstarxv. I wonder if the resin doesn’t perform in cold weather. Has anyone else experimented with this?