Here’s a familiar scenario to golfers worldwide. While walking down the fairway, the sound of one’s new, expensive clubs banging up against each other creating that ever so noticeable noise. With each step comes the probability that those new irons will now have some marks on them. Stopping short of using iron headcovers, Ogio has provided players a bag that will hush the chatter, with the Ogio Silencer Stand Bag. 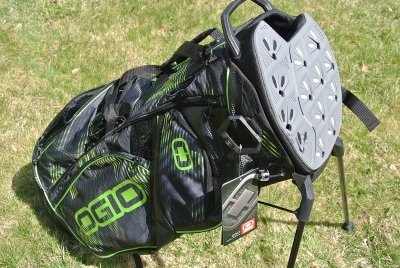 Now available in both stand and cart bag options. Silencer technology features 14 individual compartments that allow for a variety of club configurations. Each compartment has a protective membrane at the top that centers and gently holds the club shaft. The compression fit bottom securely holds the club grip and keeps it from moving and spinning.

The result is incredible protection for your club shafts and heads combined with Silencing technology that greatly minimizes the annoying sound of clanking clubs. Less clanks and less dings will extend the look of your new clubs!

Those familiar with Ogio will be well acquainted with their 14-way Woode divider system. For those who have not seen or used this system before, the Woode system creates a different take on a 14-way divider top. Looking at the bag from left to right, there are four individual slots on the left side of the bag, presumably there for woods. A putter well is located in the top right section of the bag, which is oversized to accommodate for today’s larger putter grips. Finally, nine iron slots are located on the right side of the bag. As part of the silencer technology, the individual slots are covered with a rubberized membrane. This assists in keeping clubs from moving, as well as preventing that annoying occurrence of something falling down to the bottom of the bag. 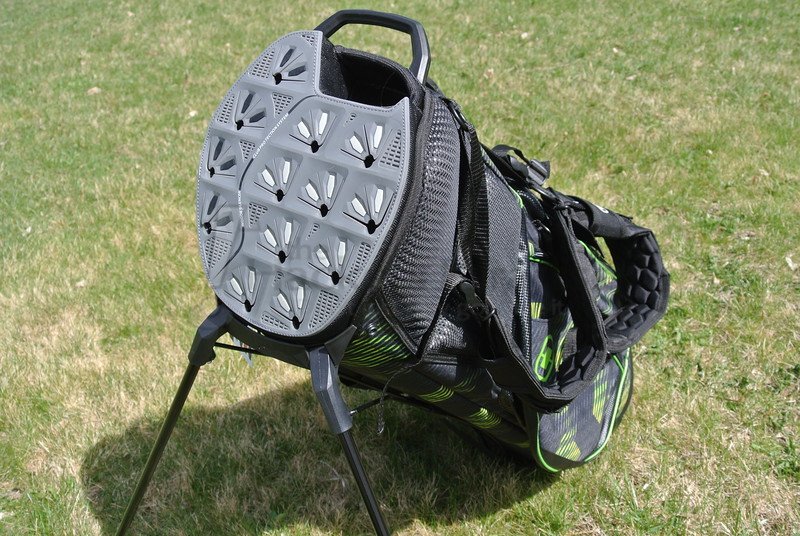 Once the clubs are inserted in to the bag they lock in place. Just by looking at the bag, one might think that they lock in on the top, as has been done with other bags in the past. However, with this design, it’s not the top of the bag that locks the club in to place, but the bottom. On the bottom of the bag are slats that when the grip end is pushed into it, the clubs no longer move.  Since the club is now locked in at the bottom of the bag, and sitting in an individual divider at the top end, that notorious bag chatter is eliminated. For the most part, the bottom of the bag does a great job of receiving and holding the clubs firm, however there are times when a little extra pressure is needed to ensure a tight grasp. Overall, the combination of the Woode top and the silencer technology produces a pleasant user experience.

Pocket space is one of those areas that can seemingly make or break the choice to purchase a stand bag. Bags that have poorly designed pockets, or not enough pocket space, tend to become more of a nuisance than a useful attribute. For this offering, Ogio has gone with a seven pocket design, with six of them able to be zippered shut. Without going over every single one of the pockets afforded, there are some highlights that should be mentioned. 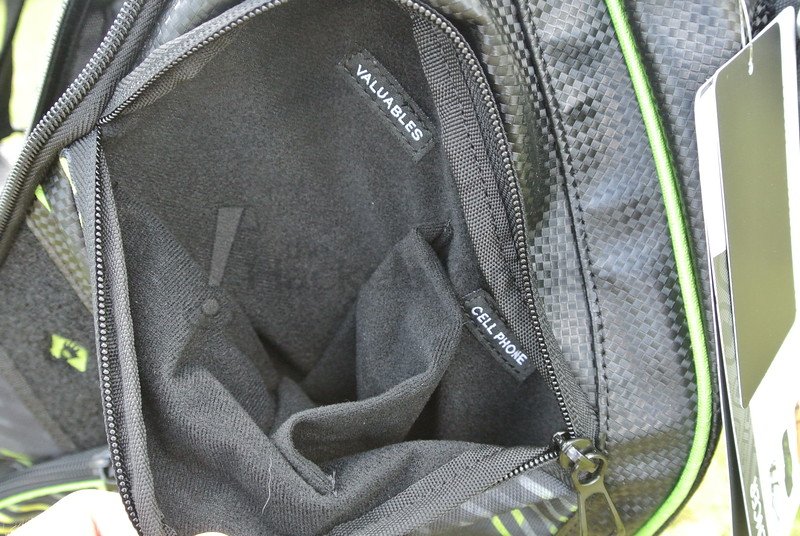 The valuables pocket is velour lined, which will help protect your phone or devices from getting scratched. Since that is a design that is shared by a majority of the bags out on the market these days, that shouldn’t come across as such a surprise. The part about this pocket that stands out is that it has a divider built within, that sorts the pocket into two separate spaces. One side is meant for a phone (and thus labeled), and the other side for whatever else a golfer likes to keep in that pocket, be it keys, a watch, a wallet, etc. This small touch is one that was immensely appreciated as it offers one more layer of protection for a cell phone screen.

As a frequent walker, having a dedicated area to hold a water bottle is an absolute must. On the lower left hand side of the bag is a deep, insulated water bottle pocket. The pocket was deep enough to fully house a 24-ounce water bottle, and with it being insulated, the contents of said bottle remained chilled. The placement of the sleeve was in a location that made grabbing the bottle while carry the bag a fairly simple task. Due to the deeper design of the pocket, it was a little more difficult to insert the bottle back into place while carrying the bag. Overall, a strong design element that those who carry will enjoy.

Sitting just below the above mentioned water bottle pocket, is a cut-out that gives the ability to place a laser rangefinder, however this feature may not be as big of a deal thanks to many rangefinder cases that clip on to the towel ring. The pocket is not overly big, therefore gave a snug fit to the multiple rangefinders that were used during testing. 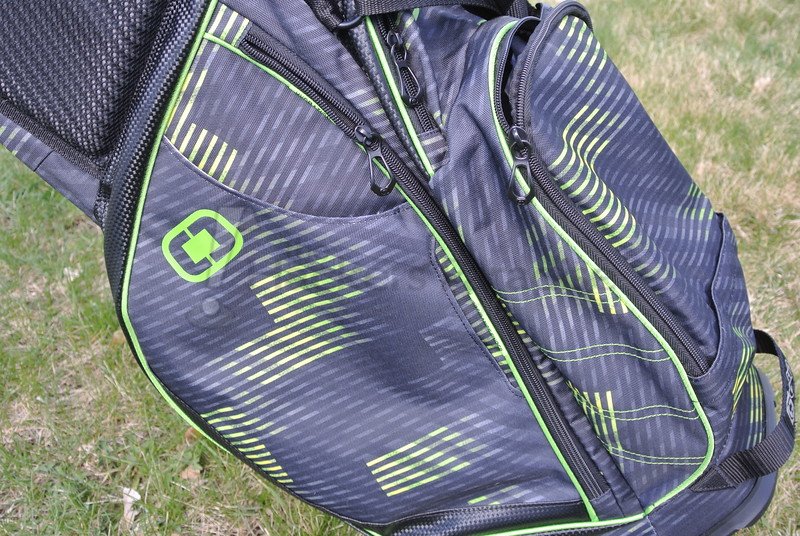 The golf ball pocket is very large. Since carrying a lot of golf balls adds a good amount of weight to a bag, it could be considered a surprise with the expansiveness of the area. A dual zipper makes it easier to open and fasten this pocket, without going through the embarrassment of having golf balls spill out of the bag and bouncing around the parking lot. One nice aspect to this pocket is that it is removable for embroidery.

The best way to describe the padding on the straps is aggressive. Both straps feature extra padding pods, which give a nice, soft and well cushioned feel. The bag was very nicely balanced thanks to multiple elastic sections on the front side of the shoulder straps. Depending on how much the bag weighs, the elastic parts stretch to give aid in balancing, as just mentioned, as well as relieving some of the weight. For players who tend to focus on weight when selecting a carry bag, the Ogio Silencer will fall in just a touch heavier than other options, at 5.9lbs. After incorporating the silencer technology, along with the Woode top, it is impressive that Ogio is able to keep this bag as light as it is, in fact at no point during rounds did the bag feel overly heavy. A generously sized and cushioned hip pad also aid in making the Ogio Silencer a comfortable bag to carry. 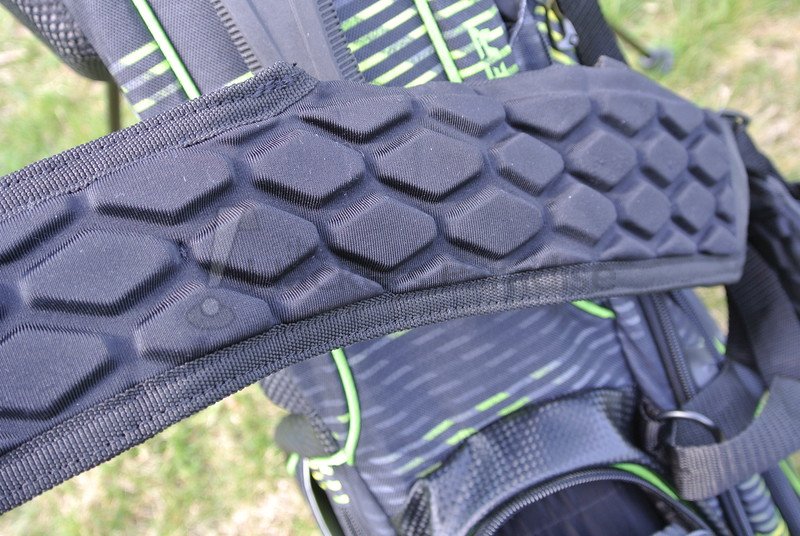 When it comes to the stand mechanism, a major concern is always how well built the legs are, and how easy it is to set the bag down and get ready for the next shot. The kickstand base on this bag runs out a little longer than others, which is great for walking. The mechanism requires little to no force for the legs to kick out and support the weight of the bag.  With legs that are sturdy, and a rubber grip foot pad on each, the Ogio Silencer should not cause any concern for tipping or sliding once engaged. 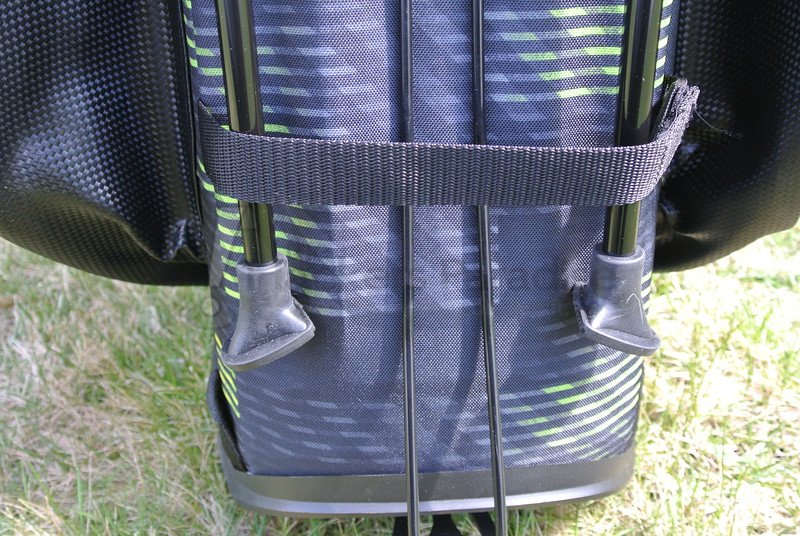 With so many options out on the market these days it can at times be rather difficult to find that perfect bag. Some are too heavy or employ a top design that is not to the liking of the player. Packable space, the base, and how comfortable the straps are, just give so many areas in which one might have to make some compromises when on a mission to the find the perfect bag. For Ogio, the list of compromises might be rather small, especially for a player looking for a 14-way divider top, a bag with plenty of pocket space, price, and as was highlighted above, a bag that is comfortable to carry.

After spending so much time with this bag the compromise became rather clear, it doesn’t always sit on a golf cart properly. While it does in-fact have a cart strap tunnel to securely hold the bag in place and limit any twisting, the base configuration became a hit and miss issue. On some carts the bag needed to be placed in sideways, because the kickstand part of the base stuck out a little too far. Most of that happened on carts that had an oval shaped bottom. Having to place the bag on the cart sideways limited access to certain pockets depending on which way it was sitting. Being that a golfer is purchasing this as a stand bag, there is a good chance that the bag will be used more for walking rather than riding, meaning at the end of the day that little nuance might not be such an issue. 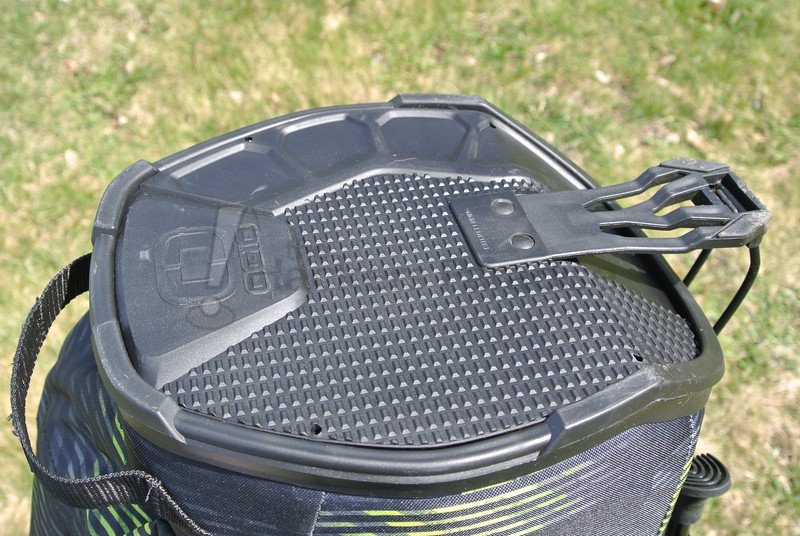 Perhaps the biggest “wow” moment with this bag came when it wasn’t being used. A day after carrying the Ogio Silencer around for 27 holes, a comparative walking round was given to another stand bag, which utilized a four-way top. Just walking the first few holes the bag chatter was in full force, bringing back the fond memories of walking the same course in silence just the day before. It was a classic moment of not realizing what was had until it was gone.

The Ogio Silencer stand bag offers many things that golfers who like to carry will enjoy: comfortable straps, a sturdy build, plenty of pocket space, and yes a top design that will keep your clubs quiet and protected from each other.  Available in four different colors, the Silencer Stand Bag can be purchased for 249.99. More information on this bag and other offerings can be found at www.ogio.com. 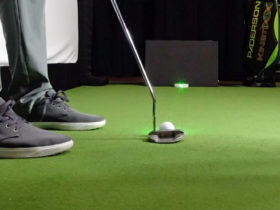 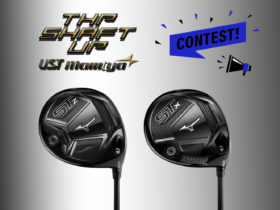