TaylorMade’s GAPR line stormed on the scene for this year’s British Open and generated plenty of buzz.  Not much in golf will generate more hype than hearing Tiger added one to his bag and immediately seeing him hit his trademark stinger on the range. Although the pros were using the GAPR line to bomb shots off the tee to score at The Open, the GAPR line offers so much more than just a stinger to the average player. 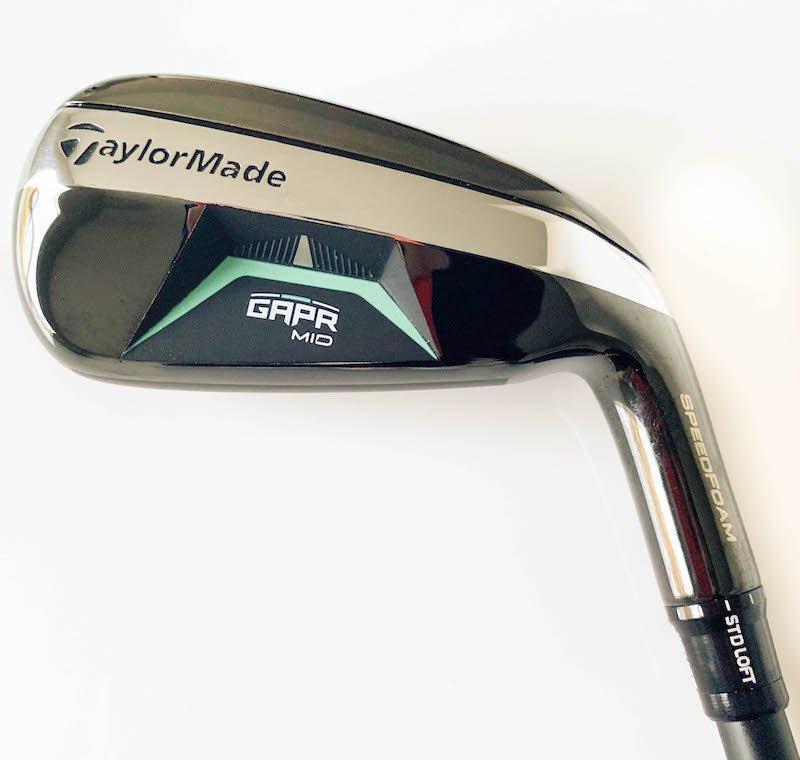 The GAPR line is offered in the aptly-named LO, MID, or HI models and can fit just about any gap that you need to fill near the top of your bag.  I received the GAPR MID 3, which has a standard loft of 18 degrees and comes paired with a KBS Hybrid shaft.  The GAPR MID also comes in both 21 and 24 degrees, although the Loft Sleeve™ adjustability allows you to fine tune +/- 1.5 degrees from standard.  Thus, the GAPR MID effectively offers lofts between 16.5 to 25.5 degrees to fit your game perfectly.

Immediately out of the box the shape stood out as different from the pack.  The GAPR MID sports an interesting look with its wider sole, more similar to a traditional hybrid but with a more iron-like face and top line.  As a result, TaylorMade has effectively created a club that gives you the look of a long iron with the forgiveness and ball speed of a hybrid.  Moreover, it allows you to effortlessly tune the loft to exactly what you need.  What’s not to like? 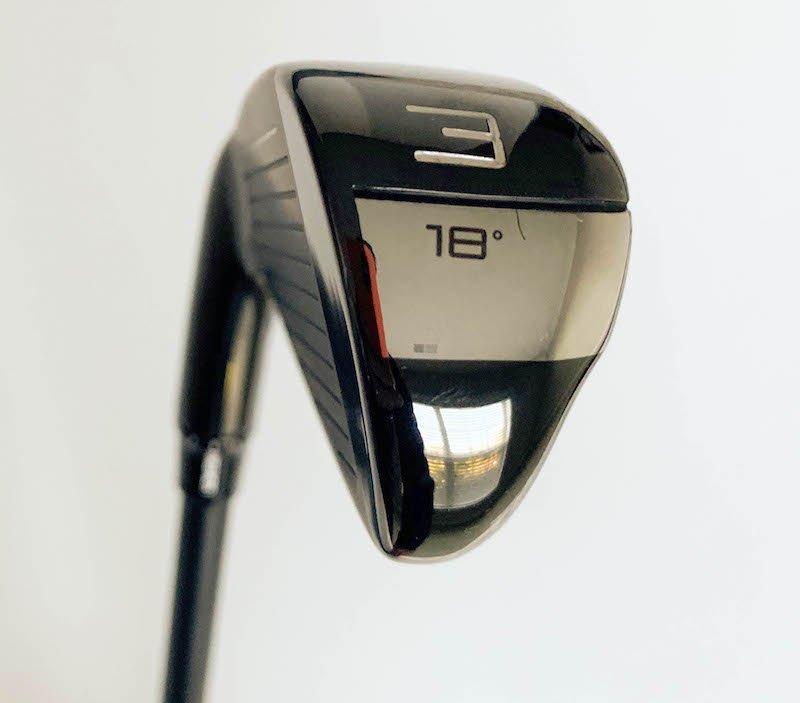 As you have gathered by now, the GAPR MID model is a bit of an interesting animal, blending the best of a long iron with the best of a hybrid.  As briefly touched on above, while the 3 head comes stock at 18 degrees, it comes with the adjustable Loft Sleeve™ that allows you to tune the loft +/- 1.5 degrees.  In other words, the MID 3 head can be played at 16.5 degrees to 19.5 degrees, and any loft between in ½ degree increments.

My testing showed that the minor loft changes could make a meaningful difference in carry, total distance, launch, spin, and descent angle.  One telling example was the difference between the same stock swing at both 16.5 and 19.5 degrees, basically between a driving iron loft and a higher launching 3 iron to hold greens.  The difference in peak height was more than 15 feet and 4 degrees of descent angle.  I’m willing to guess those with a better stinger than myself could make that difference even more pronounced.

The GAPR MID looks a bit like the child of the LO and the HI models – a hollow body and wide sole of the HI model mixed with a smaller topline more akin of the LO model.  While TaylorMade describes the MID head as a “medium-wide” soled club, it has a fair amount of heft to it that provides some confidence for a long iron replacement and a sneaky-good alignment aid.  Hidden inside the larger head is a lot of room for technology that provides forgiveness and ball speed all over the face, so if you are on the fence with the size you will forget about it when the ball screams off the face.

Although the MID head is on the larger side, TaylorMade made excellent design choices to appeal to players who prefer an iron look at address.  The black color makes the head look slimmer next to the ball and a careful curve between the sole and the topline provides a visual taper that makes the overall size far less noticeable.  While the MID will never be mistaken for a compact iron, the design choices go a long way in disguising its true size.

The MID, along with the entire GAPR line, is designed to be forgiving and provide impressive ball speeds.  The MID delivers on the performance claim.

Front and center in delivering on the performance claims is the hollow body design that is filled with TaylorMade’s popular Speedfoam.  As was the case with its previous releases, the inclusion of Speedfoam provides outstanding ball speed and a satisfying sound when properly struck.  A solid strike produces a solid crack whereas an off-center shot is a bit more muted and dull. 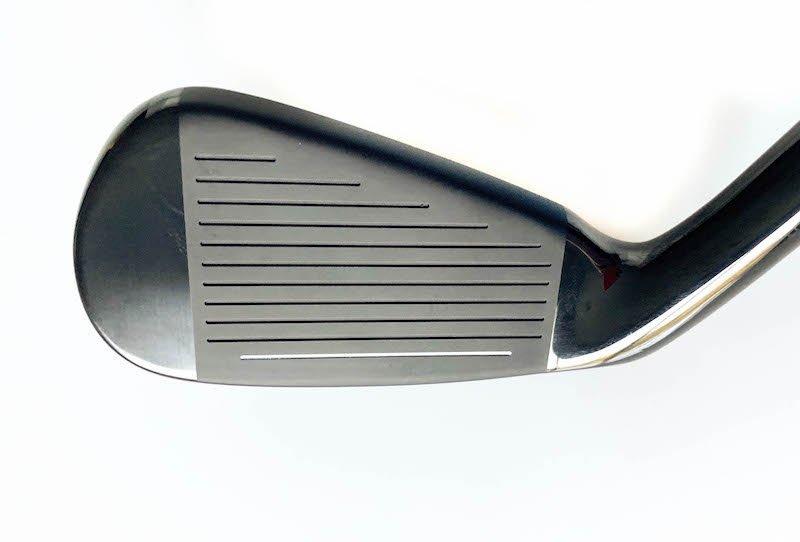 And should you catch one low on the face, the performance is still very impressive.  The MID delivers this forgiveness through its ultra-low CG (Center of Gravity) and the incorporation of the Speed Pocket™ technology, a staple in TaylorMade clubs designed to flex and rebound on low strikes.  When combined, the Speed Pocket technology and the ultra-low CG make the GAPR MID incredibly playable when you catch one thin (or live on the bottom groove as I occasionally do). As a resident mid-handicap reviewer, retaining ball speed and launch all over the face was a huge surprise for, albeit a very welcome one.  During my testing, ball speed was well retained all over the face, losing only about ~5 mph as I strayed from the center.

Finally, the KBS Hybrid shaft pairing is one that makes a lot of sense for this club.  I found the stock shaft to be a bit stouter than the traditional hybrid shafts I have played in the past but it was still quite capable of loading and launching the ball at any loft despite not being a high swing speed player.   The KBS Hybrid may be listed as “mid-high” launching shaft but I would say it favors the “mid” side of “mid-high” at my swing speed, although the head technology really wants to get the ball up in the air.

The Numbers and My Experience

The GAPR MID proved to be an outstandingly versatile club that has a spot in my bag, that is for sure.  An absolute weapon off the tee and easy to hit off the fairway made it a favorite to hit whenever possible, particularly on short par 4s and long par 5s.  And I found the GAPR MID to be plenty workable while the forgiveness kept it difficult to really lose one way right or left.  This combo provides plenty of confidence on tight fairways.

The data tells a story that minor changes can make a major difference.  Just altering the loft a few degrees can make very meaningful differences in launch angle, spin, carry, and peak height.  Depending on course conditions at the start of a round, I frequently changed from a pure driving iron at 16.5 degrees of loft on several windy days while playing at 18.5 degrees on more calm days to take advantage of the additional spin, higher launch, and better angle of descent to hold greens at my swing speed.  Being able to change things to suit your game or the conditions makes the MID a perfect, versatile compliment at the top end of the bag.

Perhaps surprising to some, the MID head cut through the turf with relative ease, which added to the overall appeal of the shape. I expected the low loft to present issues with longer rough but it performed essentially like my traditional hybrid head from the rough.  Where the MID excelled, however, was by providing better average ball speed on off-center contacts than a competitor’s 3 hybrid, both from the rough and from the short stuff.

Regardless of your game, I’d bet one model in the GAPR line will offer something to the top end of your bag.  While my bag will have the MID in it for the foreseeable future, you can learn more about the LO model here [link] and the HI model here [link] before you make your decision.  So if you need something to fill a gap between the longest iron from your set and your woods, give the TaylorMade GAPR a look.  More information on the full GAPR line can be found at https://www.taylormadegolf.com/taylormade-gapr/.   You can purchase GAPR at local retailers and online and places like www.budgetgolf.com where you can use the THP promo code 15OFFTHP to receive 15% off your purchase.