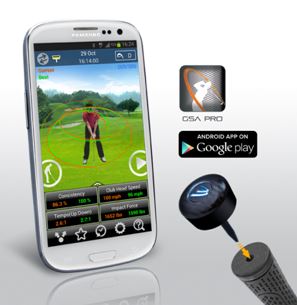 I recently had a chance to test a putting analyzer from 3Bays called the GSA PUTT. After it was written and published, the company asked that I take a look at their full swing analyzer, named the GSA PRO. The two devices share some similarities in how they operate, present information, and what information they present, so I’d recommend taking a look at my review on the PUTT for a little more information on the company and their offerings. Unlike the GSA PUTT, which I reviewed for the iOS operating system, I was able to test the PRO on my preferred Android platform.

At one third of an ounce, 3BaysGSA PRO is the World’s Lightest Golf Swing Analyzer*, which fits perfectly to the end of golf club and uses advanced motion sensors to digitize your swing motion instantly and deliver real-time animated swing plane playback along with key swing metrics to your mobile devices via GSA PRO app. Golfers can compare each swing with their best ones or instructors’ so they can identify flaws, make adjustments and track the improvement progress. 3BaysGSA PRO is a revolutionary swing training aid that helps golfers pursue more powerful, accurate and consistent swings. 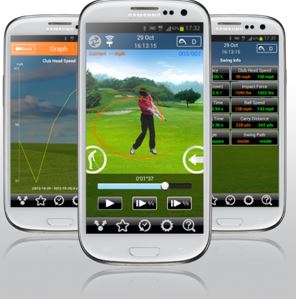 The GSA PRO works identically to the GSA PUTT. The first step is downloading the app from either the App Store or Play Store (depending on your device of choice). The PRO device itself is inserted into the butt end of the grip on your golf club and connects with the app on your phone via Bluetooth connection. Set up is very simple by following the directions that are included in the package. I personally felt like the set up for the PRO using an Android device was easier than using the PUTT on iOS, but not by a large margin.

There are some additional steps involved to ensure accurate readings when using the PRO. First of all, you’ll want to go the settings menu and make sure the lengths listed for each club match the lengths of your set. I do want to note that the Android version does not offer the ability to choose lofts for your clubs. There are a number of other settings that can fine tune the experience for you, so definitely take the time to explore before swinging away.

At that point, all that is left to do is pick the club you are hitting and start taking swings. Assuming you have a clear view of your mobile device, the app will register your swing within seconds after impact. You can take a look at the results at that point in time, or take multiple swings and flip through each one after you are done. In addition to the number readouts, each shot is displayed in a graphical representation that can be animated at a variety of speeds.

I should note that the device itself weighs next to nothing, which is a big benefit. However, I did feel like it was somewhat obstructive (at least mentally) when taking swings. Though it sits at the very butt end of the grip, I did feel like I was going to brush it at times. The fact is that I never did have a situation where that occurred, but my mind made me feel as if I was going to.

One feature that I found useful was the ability to compare my swing with a professional’s in real time. The swing paths and metrics of both the professional’s and my swing were displayed immediately after each swing. There is also the option to save that ‘perfect’ swing and use it to compare against everything else.

What does it Track?

The GSA PRO tracks ten metrics and I’ve included a summary of each one.

What does it Mean?

In the GSA PUTT review I mentioned there were a number of metrics displayed that weren’t exactly things that most golfers would be familiar enough with to self-diagnose. I didn’t feel that way as much with the PRO, mainly because there is a lot more common knowledge out there in regards to the full swing. I felt like I had a good handle on everything that I was seeing, though the question does remain – how do I fix the problems I see? I do think that’s a spot where devices like this fall short. Some things are easy to spot and not so hard to diagnose, but others are probably best left to a professional. I’ll give some examples.

In this swing you can see that my back swing (blue line) is substantially longer than the pro’s (green line). 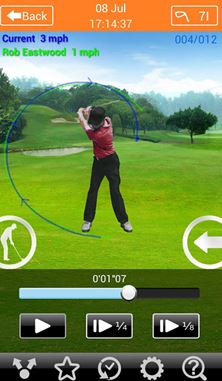 This is a problem I’ve known about and attempted to work on for a very long time, but it’s difficult to get instant feedback without video recording. In this case, the GSA PRO was quite helpful. By the end of testing I was able to get the end of the blue line around the top of the right shoulder instead of mid-back. While not as good as the professional’s, it was a big improvement that has paid off for me on the golf course.

These are representations of the rest of our swings, from both the head on and down the line views. 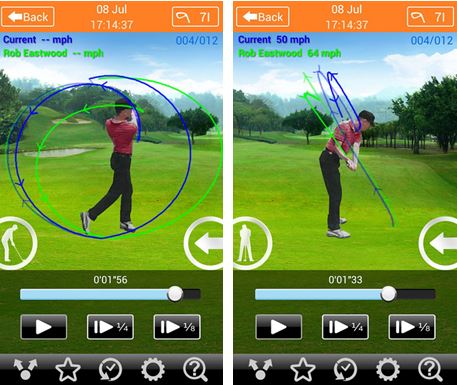 As you can see, my path is wider on the down swing, but my follow through is narrower than the pro’s. Looking at the swing from the down-the-line view showed me that while I was usually inside to square on my downswing, I was nowhere near as far inside as the pro. The problem is that I don’t know how to fix this, other than seeking the advice of my instructor. In fact, my feeling is that I’d do more harm than good trying to fix an issue like this on my own.

In summary, there is some valuable information available to users of the GSA PRO, but it does have limits. If you lack the ability to self-diagnose and prescribe yourself a cure, I’d probably lean towards recommend seeing a professional. That does bring up a suggestion for improvement with the PRO – individualized feedback from the professionals for certain swing flaws based off what is show on the app could benefit many users.

I’m going to discuss accuracy in two ways. First, in regards to the swing path that is shown on the visual display, and second, the accuracy of the numbers presented.

My perception was that the swing path and club face angle readings were accurate. I tested this with both my normal swing and by exaggerating misses like a big over the top move or an open face. To further bolster my feeling that I was getting accurate information here, the aforementioned long backswing was right in line with what I’ve seen on video when I’m at a golf lesson.

I did feel like I saw some inaccuracies with the swing speed and distance related readings. Let me first say that I’ve had the luxury of spending hours upon hours hitting balls on different types of launch monitors, so I do have a good handle on what my normal numbers are for different clubs. After some time testing it, I felt like the GSA PRO was registering lower than I expected, but I wasn’t quite sure. To test this I took a laser rangefinder with me to the driving range for some practice. I set up to a flag at 142 yards, grabbed my 9 iron, and selected it as the club I was using on the app. What I noticed was a discrepancy of approximately 15 yards in the “Distance” reading, with my shots landing right at the flag and the app recording them as flying in the mid 120’s. In addition, my swing speed and ball speed were registering much lower than would have been needed to hit a nine iron that distance. I did mention that there isn’t an option to pick the loft of your club on the Android version, but I did have the correct length chosen. I will say that I felt like this was a pretty substantial issue, as it did leave me doubting my abilities on a couple occasions that I didn’t have the option to laser the flags I was aiming at. It was somewhat disconcerting to see numbers telling me my swing speed was significantly lower than normal.   I wonder if a loft selection feature would bring the numbers more in line with what I was seeing. It’s certainly a place for some potential future improvement.

As with most items I review, I do see some value and some room for improvement with the GSA PRO. The swing path animations were most useful to me and helped me identify a problem I struggle with in real time. This coincided with some greatly improved iron play after a little work.  However, there are still issues I identified that I think would be better addressed through a PGA Professional. The light weight of the device doesn’t interfere with the balance of the golf club, though its location did cause me to think about it during the swing at times. The biggest detraction I saw was questionable accuracy in regards to swing speed and distance, though I do think that can be improved in future updates. The GSA PRO is available for $199.99 on the company’s website, www.3bayslife.com.