TaylorMade took its crowd favorite P790 irons and refined them to be a better version of themselves. Although it looks similar, TaylorMade altered the design to look better at address and tweaked its technology inside to provide better launch characteristics and to gap better between clubs.  I put these claims to the test, and I saw firsthand how the seemingly small changes that TaylorMade made to the P790 design improved its performance.  If the idea of a faster, sleeker, and more consistent set of these irons excites you – read on. 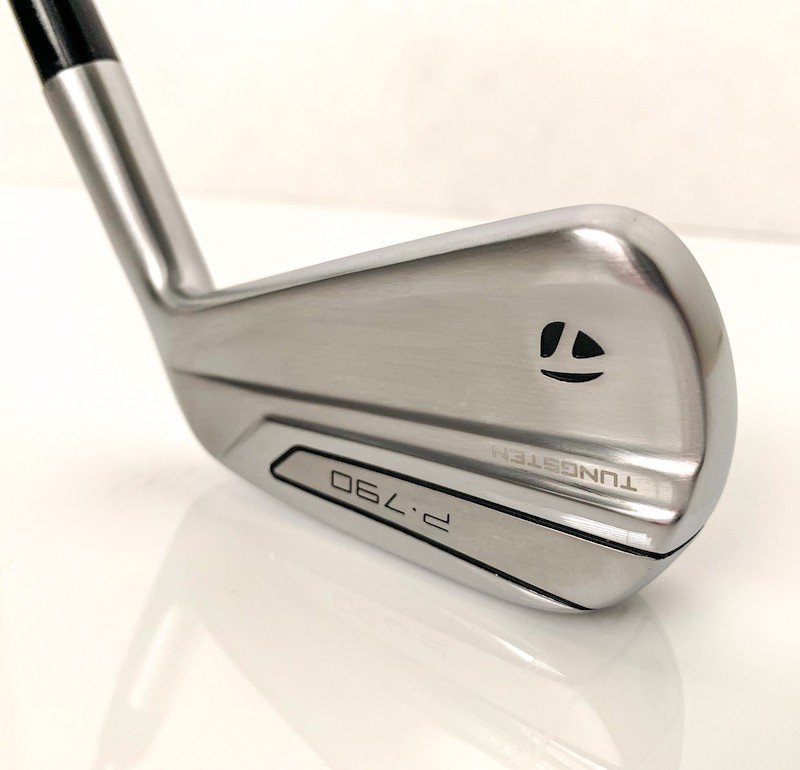 The P790 grabbed a lot of attention in 2017, both from golfers and the industry.  Its hollow body design packed both new and well-proven technology into a compact, sleek body, and golfers loved it.  Judging from the lawsuits that followed, it ruffled some feathers in the industry as well. Unsurprisingly, the P790 sold well across a wide range of skill levels and TaylorMade ultimately had a winner on its hands.

Capitalizing on the success of the first iteration, TaylorMade recently announced its updated P790 irons looking to improve the few shortcomings of the originals while delivering a similar club to what golfers fell in love with.  A few weeks ago, we took a first look and previewed some of these changes that refined the DNA in the 2019 P790 irons, which you can find here. Now, we had the chance to put these clubs to the test and see what these changes can do in reality.  In short, TaylorMade made small but meaningful changes that resulted in tangible increases on the launch monitor and made a good-looking club even better.

The fast get faster

Candidly, when I read that these irons would be faster off the face than the original, I found it hard to believe.  However, after seeing a consistent 2 mph increase in ball speed from the originals, which translated to roughly half a club of extra distance, I was incredibly impressed.  TaylorMade has taken what I considered to be one of the longest clubs of 2017 and made it even longer by thinning the face up to 7% to provide a higher Coefficient of Restitution and a hotter face. Although TaylorMade isn’t making bold claims about the increase in distance this year, the potential is definitely there with the proper fitting.

The ball speed increase is only half the story.  The 2019 P790 irons also launch a little higher than the original.  By thinning the face and removing mass from the high toe of the club, TaylorMade was able to increase the amount of tungsten at the lower back of the iron, which is also plainly visibly bigger this year.  This means the Center of Gravity (GG) is even lower than the original, which helps launch the ball higher.  In my testing, the new P790 irons were launching nearly half a degree higher than the 2017 version.

Additionally, the 2019 irons also include the same Thru-Slot Speed Pocket as the original that maximizes ball speed on miss-hits.  The combination of slightly higher launch and increased ball speeds make the 2019 P790 irons playable over a very wide range of skill levels, and a heck of a lot of fun to hit. 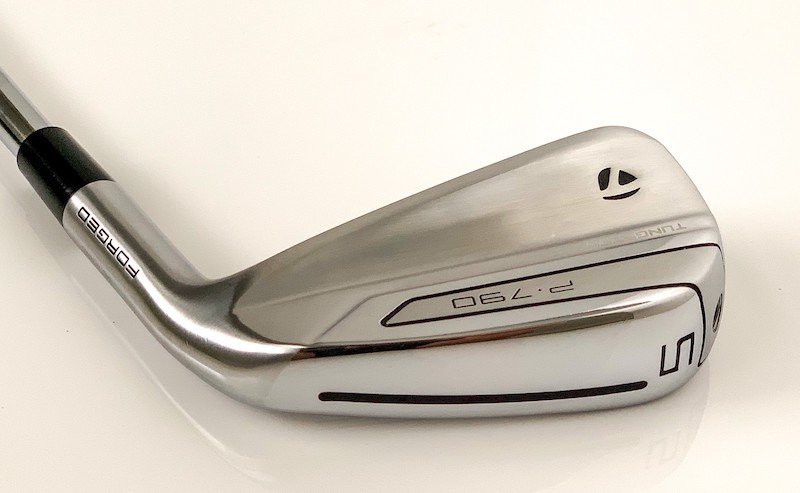 TaylorMade also sought out to fix one of the most common complaints with the original P790 irons – the gapping in the short irons.  Although the problem is not isolated to TaylorMade, it was not uncommon for a perfectly struck short iron to unexpectedly fly too far, and way further than a non-perfect strike.  It was almost like there was a super-sweet spot and if you found it, the ball would take off like a rocket and land way past your target.  Partially because of this issue, it wasn’t uncommon for better plays to split set the irons with other irons in TaylorMade’s “P Series.”

Well, it looks like the 2019 P790 irons have solved, or at least minimized, this problem by incorporating Progressive Inverted Cone Technology.  Using the Progressive Inverted Cone Technology, TaylorMade designed the face to have a slightly thicker face at the sweet spot and a thinner face around the sweet spot that is designed to provide consistent carry distance on center and off-center strikes, and reduce the chances of the unexpected distance from a perfect strike.   With all that said, it looks like it worked.  Having used the 2019 P790 irons for several rounds and countless balls on a launch monitor, the Progressive Inverted Cone Technology worked as advertised, and the difference between perfect strikes and off-center strikes is not as drastic, and far more consistent than the original P790 irons. I’m certainly not saying that that “perfect shot flyer” won’t happen, but the frequency should be far less.

The new P790 irons continue to feature a forged face and a soft, hollow body construction filled with TaylorMade’s proprietary SpeedFoam, just like the originals.  The SpeedFoam provides the necessary support for the thinner face and decreases the hollow sound at impact.  Unfortunately, if you did not enjoy the sound of the original P790 irons you are out of luck because the two iterations sound basically the same. Personally, although it isn’t a solid “crack” at impact, the irons sound fine to me and not hollow.

Finally, the TaylorMade designers made slight alterations to the body shape in the new 2019 P790 irons, which are both functional and make the club look better at address.  For example, the 2019 short irons actually look like short irons rather than shorter long irons now that they have a shorter blade length.  Addressing functionality, TaylorMade’s engineers altered the sole radius to decrease the irons, which should decrease the propensity to dig into the ground and improve turf interaction.  TaylorMade also decreased the offset of the long irons. Of course, this decrease is only fractions of a millimeter depending on the club. The decrease in offset should appeal to the better players who carry the long irons but prefer less offset.

All told, the 2019 P790 irons are an intriguing set.  They provide the ball speed and launch that nearly every golfer needs, but while still allowing the player to easily flight the ball for penetrating shots that do not balloon.  The P790 irons provide the feel and feedback that will tell you when you missed the center and where you missed on the face, which better players demand.

TaylorMade’s small but meaningful changes to its popular P790 line of irons are sure to attract plenty of new and older buyers.  If you were on the fence about the line before, it might just be time to get off the fence and give them a try. You might love what you find.  You can find out more about the P790 irons on TaylorMades website at www.taylormadegolf.com or join in the discussion on the THP Forum here. 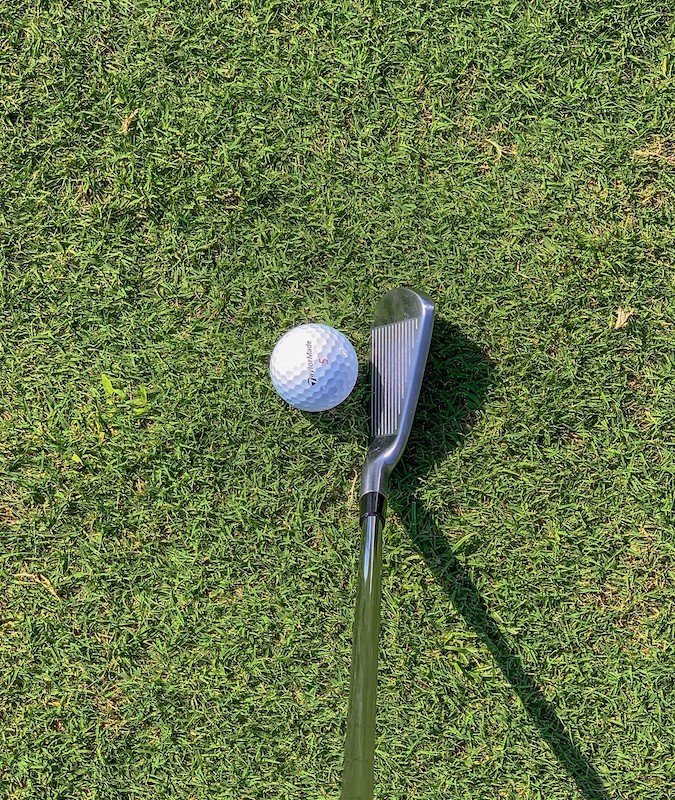