Adams Golf created the Speedline line to showcase their aerodynamic technology and add distance and forgiveness to the world of golf drivers. The clubs were hits with many of our readers and now they are releasing their 3rd generation of Speedline technology with the Fast 10. These drivers are designed to increase club head speed, resulting in up to 15 more yards in carry distance. Is it marketing or is it fact? By the time you finish this review, we should all know the answer to that question. From the Company
As with the entire Speedline brand, the patent-pending aerodynamic shaping of the third-generation FAST 10 driver refines the technology to create 10 percent less drag and airflow turbulence than previous models, resulting in up to 15 yards more yards of carry distance. Design improvements include a 100 percent increase in toe curvature and a 300 percent decrease in the heel curvature for even more efficient and stable airflow attachment around the club head. The new features reduce drag throughout the swing for a faster club head speed that generates more distance than previous models, all with 10 percent higher MOI.

“The success of the Speedline series clearly shows that the benefits of a driver head with aerodynamic shaping which delivers increased distance has resonated with golfers of all playing abilities,” said Chip Brewer, President and CEO of Adams Golf. “Now, with the launch of Speedline FAST 10 as the third-generation of this technology, we have furthered our lead in this exciting new category of drivers.” Both of the men’s versions of the driver and the fairway wood will debut with a choice of high-performance shafts: the mid-high launch Aldila Wasabi or the mid-low launch Matrix HD. The suggested retail price for the Speedline FAST 10 drivers is $399.99.

Available lofts are as follows:

Looks
After removing the Speedline Fast 10 from the box, we took off the headcover to get to the actual product. The headcover certainly worked, but we would have liked to see a little more creativity go into it similar to the club head. The club head has an all black crown and at setup appears to be very traditional looking and something everybody in our office was kind of excited about. Similar to previous Speedline models, the traditional looks end there. The sole of the club is done in a great blue color with green and white accents. There also is some sort of scientific formula on the sole under the name and to be perfectly honest, while I thought it was odd looking, I never really looked at it again to see what exactly it was. So if it is a treasure map, please forgive me. The version we received from Adams featured the bright green Aldila Wasabi shaft, which when it comes to looks really shines and pairs up well with unique driver head. Another stock version is available as mentioned above. The entire club really has a great overall look to it and something we were excited to put into play. Testing
Since the Adams Fast 10 driver had just gone through the 2010 Driver Shoot Out, THP did not feel it was necessary to do a separate range testing. During the DSO, the Adams fared extremely well picking up a top 5 in distance and was well liked by the majority of the participants. However since the results had been posted, I had been eager to take this one out on the course for personal testing and I have been able to get 6 rounds of golf and countless range sessions in with the Speedline Fast 10.

This driver delivers and was one of my favorites in recent memory with distance and forgiveness. The ball flight I saw on the course was a “get up quick” rather than a penetrating flight, but I saw no loss of distance (more on that later). The Wasabi shaft is geared towards hitting it high and it delivered, as these balls were sailing in the air. The forgiveness was something slightly unexpected and extremely nice to find. When missing the sweet spot (I know you don’t do it, but I do sometimes), we still got the same high ball flight and really lost very little distance. In fact when missing the sweet spot on the toe side, we were seeing almost no distance lost. Something we had not seen before and was a pleasant surprise.

The Feel is where I think that Adams really delivers their best attributes in the Fast 10. While distance and forgiveness is what someone wants to get out of performance, if the club feels “clunky”, it just will not work for many golfers out there. In my opinion it was the one thing that has always helped the Speedline drivers and the Fast 10 is no different. Tremendous feel at impact and despite its incredible forgiveness, you still get great feedback. The sound of the new Adams driver is one most will like as well, with no loud car crash, windows breaking, or tin can getting beat with a hammer. The Fast 10 actually sounds like a golf club and was “music to my ears”. Overall
When testing out drivers, THP has certain criteria that it looks for which is Looks, Feel, Sound, Distance, and Accuracy and this driver fared well in every category. Did the Adams Speedline Fast 10 add 15 yards of distance to my drives? No, it did not, but I was getting about 4 yards more distance than I have normally been getting on the course (according to GPS), and that is no laughing matter. During the course of this review I was able to add 4.1 yards of distance without any sacrifice in fairways hit (accuracy), something that was not expected and was very much enjoyed. Adams Golf seems to have hit their stride in the Speedline driver line and THP thinks that they have a winner on their hands. For more information on this driver or any of the other products that Adams Golf has out, check out their website at www.adamsgolf.com. 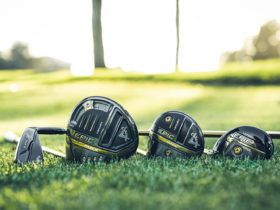