adidas Golf has unveiled their SAMBA GOLF majors collection for 2012, that includes four limited edition colorways, individually numbered and inspired by golf’s most prestigious tournaments. Only 1950 pairs of each model have been created, commemorating the introduction year of the original and iconic SAMBA.

Introduced in 1950, the original SAMBA was created to enable soccer players to train on hard, icy ground and quickly evolved to become a dominant indoor soccer shoe. Over time, SAMBA’s combination of classic styling and comfortable fit fueled its transcendence into a modern-day essential worn everywhere from athletic fields to city streets regardless of age and gender. Today, the SAMBA has sold more than 35 million pairs worldwide and now, for the first time, golfers can showcase the legendary footwear on the golf course and represent their favorite major in style.

Commemorating the season opener, this design is inspired by the vibrant colors, heritage and traditions of Augusta National. DARK GREEN / SUN / WHITE available on March 1, 2012.

Inspired by the historic Olympic Club in San Francisco and the patriotic stars and stripes in the United States flag. NEW NAVY / POWER RED / WHITE available on May 1, 2012. 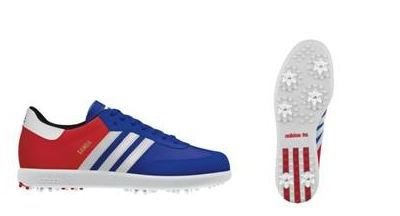 Celebrating one of the world’s premiere links courses, this design is inspired by “Union Jack” – the national flag of the United Kingdom. BRIT BLUE / UNIVERSITY RED / WHITE available June 15, 2012. 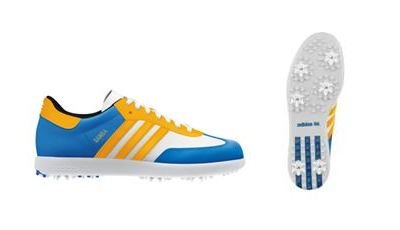 Inspired by the warm beaches surrounding Kiawah Island and the epic scenery found in the region of South Carolina. POOL / HALF ORANGE / WHITE available July 15, 2012.