(TORONTO) – Arnie – a partnership between Arnold Palmer Enterprises and the co-founders of Quagmire Golf clothing – announces that PGA Tour star and style icon Ryan Moore has become the brand ambassador for the new golf and lifestyle apparel line directly inspired by Arnold Palmer’s classic looks from the 1950s, 60s and 70s.

As part of this multi-year agreement, Moore will exclusively wear Arnie during all competitions, display the logo on his shirts, make appearances on behalf of the company and be featured in its marketing initiatives.

“Mr. Palmer is among my all-time idols as a golfer and a person, so competing in these clothes and being so closely associated with his style legacy is a dream come true,” says Moore. “The research that went into each piece is really evident and when you combine those timeless elements with advanced technical fabrics you’ve got something great.” 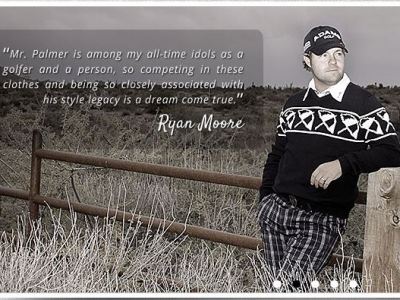 Consistently ranked among the sport’s top-50 players, Moore has garnered worldwide acclaim for his skill as well as his attire, which has included throwback looks like skinny neck ties, cardigans and vests. In six full seasons on the PGA Tour, the 29-year-old American has one win, six runner-ups and an additional 20 top-10 finishes. Prior to turning pro, he had one of the best amateur careers in history, highlighted by a 2004 season that included victories at the U.S. Amateur, U.S. Public Links, NCAA Championship, Western Amateur and Sahalee Players Championship.

“When we discussed the guy to become the modern face of Arnie, Ryan was No. 1 on everyone’s list,” says Geoff Tait, Creative Director for Arnie and Quagmire. “He truly gets our vision and is a dapper guy who’s always moving mainstream menswear trends onto the fairways.”

Recently ranked one of “The 25 Coolest Athletes of All Time” by GQ, which previously named him one of the “50 Most Stylish Men of the Past 50 Years,” Mr. Palmer was also honored as one of “The 75 Best Dressed Men of All Time” by Esquire. The Arnie collection was developed through countless hours researching primary source material – including Mr. Palmer’s personal library of photographs and archive of historically significant garments. It is set for three deliveries in 2012, each with a distinct aesthetic:

• 1950s (February) – During this period, Mr. Palmer showcased slim, clean-fitting clothes. He preferred fitted pants and tops with short plackets, small collars and shorter sleeves. Red was a prominent color in his wardrobe and is exclusively found in the 1950s collection.

• 1960s (April) – While dominating the competition, Mr. Palmer was also looking the part. Wider legged pants, wider collars and longer shirt plackets were the style of the day. No golfer of the era looked as naturally cool as Mr. Palmer, especially in his staple color of blue, which is exclusively found in the 1960s collection.

• 1970s (July) – While piloting his own plane around the world, Mr. Palmer’s wardrobe continued to evolve and set trends. He chose shirts with slightly wider collars and long plackets, but the fit of his pants more closely resembled a modern boot cut. His color palette also became more subdued, hence grey being the signature color exclusive to the 1970s collection.

Two buddies who met on a golf trip, Geoff Tait and Bobby Pasternak founded Quagmire in 2005 and were named “Canadian Executives of the Year” by ScoreGolf Magazine in 2011. The line – which includes men’s, women’s and kid’s golf and lifestyle clothing – is available at hundreds of pro shops and off-course retailers throughout North America.