If you have kept up with putters since 2006, then odds are you have seen or heard about Axis1. More than likely, the aesthetic is what caught your attention.  In order to create a putter which founder Luis Pedraza believed to be ideally balanced, the focus was on function above form. As time has gone, Axis1 has had success on Tour’s across the globe and as is natural, they have evolved their designs. When Justin Rose came to Axis1 with the desire for them to implement their design into a #7 shape, the challenge was accepted, and the Axis1 Rose was born.

Maybe the most unique hosel design in all of putters, and while it might not win all of the beauty pageants, there is no denying the heel counterweight creates one of the most stable putters throughout the stroke. The Axis1 Rose is a unique application of design onto one of the most popular putter shapes of all time with consistency being the name of the game.

Before I get into my time with the Rose design, I think it is worth going over exactly what the basis of the Axis1 design is intended to do.

As mentioned earlier, Axis1 founder Luis Pedraza set his focus on creating a perfectly balanced putter, as he believed this was the main flaw in all other putter designs. Undoubtedly, you know the toe-hang on your putter, and this is based around the overall balance and center of gravity placement of the design in question, for Axis1 they believed that the natural opening of the putter through the stroke was at its root another variable into the stroke.

Therefore, the goal was to make a design that was totally balanced by putting the center of gravity of the putter directly in line with the axis of the shaft.  What this does is prevent the Axis1 designs from naturally opening up through the stroke, they want to stay square throughout in order to create what the company believes to be a more consistent and on-line putter design.

When you check the toe-hang of the Axis1 in hand, you will see that the toe actually goes up. While Axis1 isn’t the only Toe Up design (it has been done by Edel, L.A.B. and even Odyssey), but the way they get there is what sets them apart. That unique, and not necessarily everyone’s cup of tea hosel placement, into a counterweight is what makes Axis1 believe their method is most effective.

A Rose by Any Other Name…

For those of you scratching your heads, that’s Shakespeare, and no I’m not comparing the Axis1 Rose putter to Romeo and Juliet, although there is some quarreling of the toe-up/torque-reduced putter design families out there which could fit.

I was able to get the Axis1 Rose putter in for review at 35” and paired with the standard Lamkin Deep Etch putter grip.  While I know it isn’t as flashy as some grips on the market, the Deep Etch is still one of the most iconic designs out there, and its size allows ample feedback to the hands which was nice when it comes to reviewing a putter.

Aesthetically, I was excited to work with the Rose model because I wanted to see up close and personal how Axis1 has truly made an effort to create shapes and models with the goal of being more “traditional” (read: not as visually radical) in order to get more to try the Axis1 design. I have no problem admitting I hadn’t tried one in the past because the original blade is just so vastly different that even the putter nerd that I fully admit to being couldn’t get past it. I have to say though, the Rose, it’s a darn good take on the 7.

Yes, the weight spud is there, and it stands out first and foremost, after all that hosel design is so unique it has to stand out, but the rest of the putter genuinely surprised me. The two-tone contrast of the blade base to the putter being satin and the fangs a matte black stays balanced so that it looks more sleek than flash. Additionally, you can tell in hand the weight remains forward in the design thanks to a lighter material in the fangs. However, I am most impressed with the quality of the materials and finish as I read feedback on the original models that weren’t all that flattering, but I have no knocks on the Rose but rather a good amount of praise.

To the nuts and bolts of it though, once I got past the visual at address of the hosel, and I will admit it didn’t happen overnight, the balance here is impeccable. Seriously, through the stroke the Axis1 Rose feels square the whole time and there was no urge to manipulate anything which is something I typically struggle with in a mallet. At 355g it also isn’t cumbersome despite the size profile, and as we all know by now, the fang design is one of the best ever when it comes to alignment. Worth noting, the blade forward section is milled of 303 stainless steel and as such it’s a familiar feel/sound, slightly on the higher pitched side, but firm/solid in a non-off-putting way. It isn’t going to be called “soft”, nor would it be considered harsh.

All in all, the Rose is a good direction to see from Axis1. The roll is pure and repeatable, the balance is true, and the accuracy can’t be denied. What it all comes down to for people, right or wrong, will be the look. After working with this one, I do believe they’re finding a footing between form and function that will appeal to more golfers, and at $449.00 they need to find that footing. 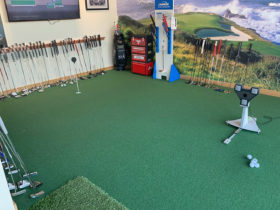 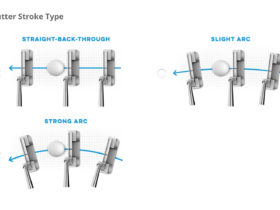 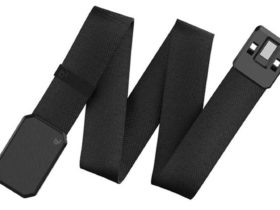