I have been an avid follower of the Bridgestone product line for many years.  One of my fondest memories coming out of college as a junior golfer was taking on a set of J33 Cavity back irons and really learning how to strike the ball.  It was a great combination of functionality and playability, and began a decade long appreciation for what they can accomplish, and how they have been aiding golfers in their games.  For late 2018, Bridgestone is releasing two new JGR irons that blend their “Tour B” with their JGR to create irons that help to blur the lines between player irons and game improvement.  For this particular review, I had a chance to take a long look at the Tour B JGR HF 2 irons in 4-AW (the 4 iron is offered separately from the 5-AW set makeup). 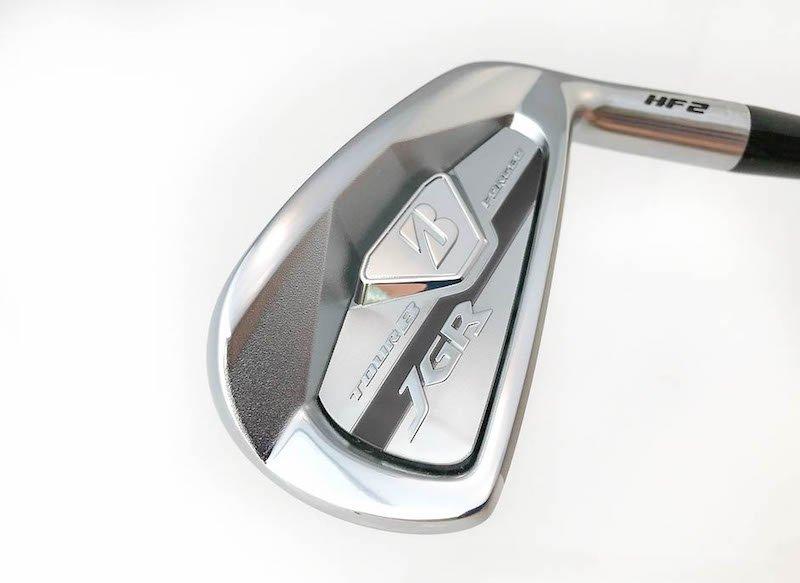 Out of the box, the HF2 irons tell a story.  Not in a technology sense, but at least from my perspective, an expectation of intent with how they are constructed.  When you strip away the color, the badging, the logos, and the font, what is left is a cavity back iron with weight out on the perimeter (a big step away from irons like their Tour B X-CB, X-Blade, and former releases like the J40 CB profile) which is pretty clearly done to support MOI and strike quality away from center.  It is a big step forward from their JGR Hybrid irons which go above and beyond to create a hybrid style iron, and functionally a step forward from their JGR CB iron which was a very weight neutral profile.  Making a long story short, and without intent to bring in direct comparisons, they are filling a gap here that has been effectively produced by other club companies, in a profile that has been extremely successful in different forms.

As I do with most clubs that cross my path, I took the HF2 irons out onto the course immediately, with no premonition or assumption on shape, flight, launch, or technology.  It seems to be the easiest way to get an early read on clubs without bringing assumptions into play.  Two things became quickly apparent.  First, these irons went left in a big hurry compared to other CBs I’ve been playing, and secondly, their sound feedback is worthy of a second and third take.  As I do not have the full technical details of how the set is constructed, I cannot really speak to what was driving my shots left, save for maybe a small assumption on offset (which was substantial in their previous JGR offerings) which is not so much a guarantee of left as much as it is a visual autocorrect on my part at some point in my swing shutting down the face.  There will be more on this later in the review. 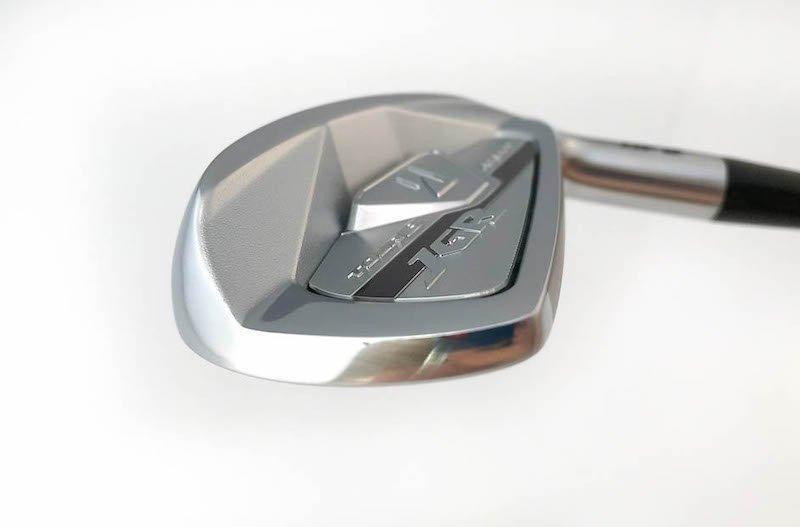 What I really want to focus on, and what I think will draw a lot of demoing golfers towards this set of irons, is the feedback it provides.  There are two major technological elements in play here for Bridgestone, one of which I can address with my personal feedback, and one of which I will use the help of Foresight GC2 numbers to support.

The first element of technology is “Power Slit Face Design” which Bridgestone markets visually as a backwards “L” shape profile between the face and the sole.  It is a 2.2mm thick piece of “ultimate strong metal 2.0” (similar to what we saw in the JGR hybrid irons) that is designed to improve the COR (coefficient of restitution aka how ‘hot’ the face is) and really propel the ball forward after contact.  While it is impossible to make claims as to how much this is helping the club launch the ball forward, I managed to get some Foresight GC2 numbers on the 4 iron during testing that are exceptional in the ball speed spectrum.  Here is a quick look at the overall numbers, and how tightness of the dispersion. 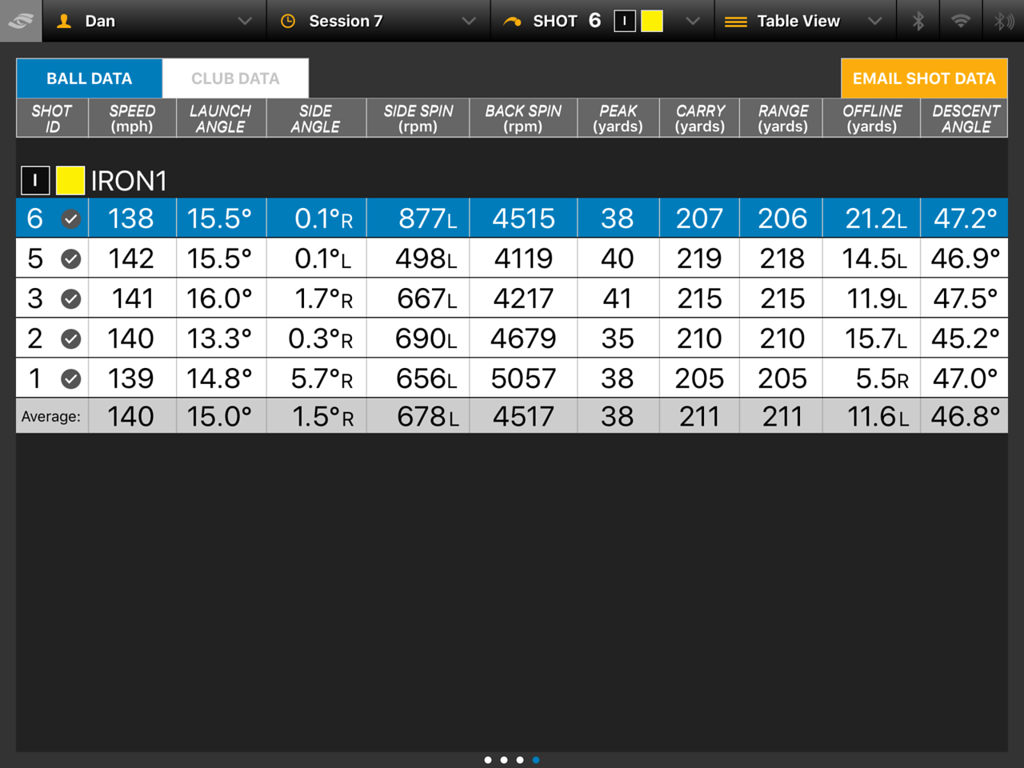 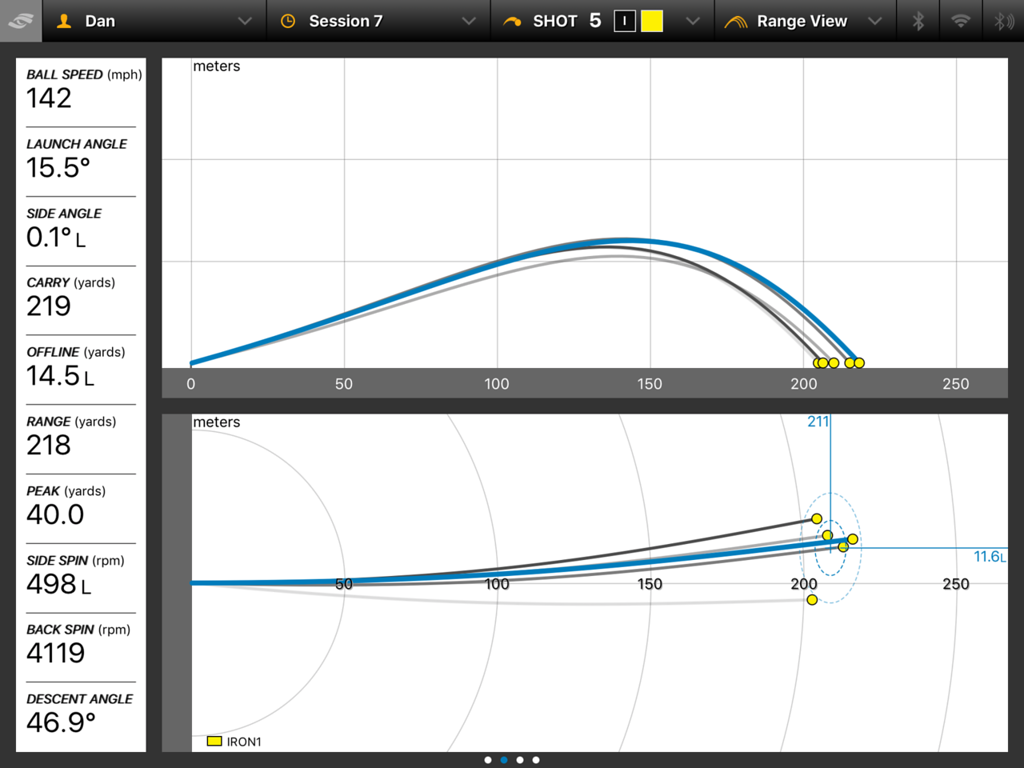 There are a couple things I would probably seek to improve over time with this iron setup, like the overall launch and peak height which could be tweaked a fair bit with a shaft change, but what is most telling here is the 140mph or better ball speed, which occurred more often than not during testing.  This was completed on course using the same ball, with only one throw away out of six barely teed up balls.  The one throw away was at 132mph due to a bad swing hitting the ground before the ball.  Based on some quick googling, these numbers put me on par or better with tour averages in the 4 iron slot for ball speed, which is a pretty exciting feat.

But the more impressive aspect of the setup and experience is the dispersion.  I do tend to play a ball off the line with a small draw, so while it does seem like the miss is left, it is actually very consistently my intent.  Outside of the single strike that hung onto the right side with a slight draw, the others found themselves in a nine-yard circle which is fantastic for a 4 iron.  During one of my final rounds using the HF2 irons, I was taking a couple extra swings here and there, and twice I managed to place the balls within a club length of each other.  Consistency is a great thing. 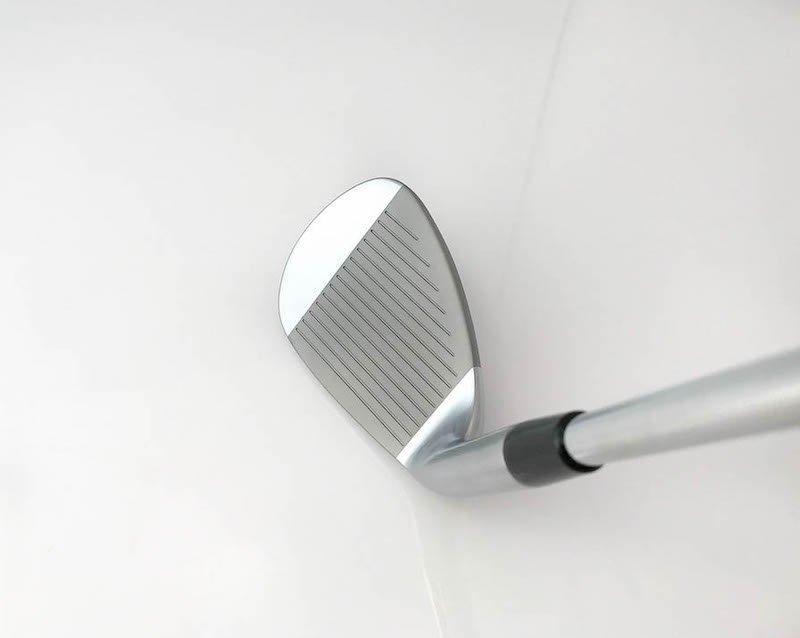 Moving on to the second element of technology in play, Bridgestone explains the presence of a polymer insert on the inner cavity of the club.  The goal of this?  To reduce vibration and improve the sound into a more crisp profile at impact.  I was eager to learn more about this iron as the testing progressed, and when that information arrived via Bridgestone, it made my experience a lot clearer as sound was consistently one of my favorite aspects of the testing.  Pure contact, especially on the longer irons at faster speeds, sounds excellent.  It is not tingy or manufactured, it simply sounds like a full bodied, clean strike on a golf ball.  Now, it is probably not going to rival either of the player profile Tour B irons overall, but it bridges the gap beautifully between a players cavity back, and a cavity back with some technology driving the results.

Turf interaction was also a welcome surprise.  Testing provided plenty of opportunity to drive hard into the turf and hit clean shots off fairway lies.  The 4 iron, which should equate to being the most challenging of the set to get a clean quality contact actually interacted well with the fairway.  The bigger miss seemed to be a hair thin rather than clunky and ground early.  Even some shots that did not arrive ball first managed to promote decent distance (not great, but certainly decent).  It also promoted a fair bit of freedom into the scoring irons, where grass could be displaced in large chunks or hit clean.  The grass was not particularly firm at any point during the review process, but it did seem like turf interaction was more at the discretion of the player versus the profile. 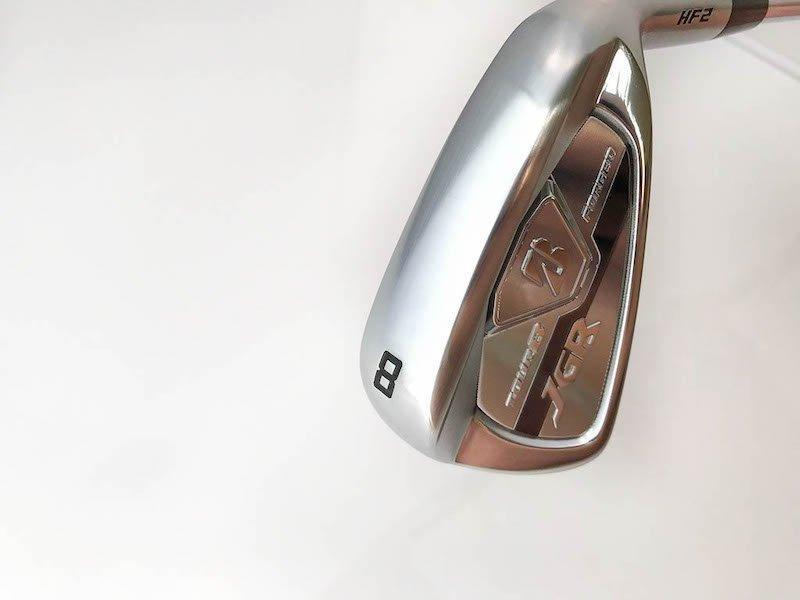 One final takeaway was not actually an experience of my own, but rather the experience of a player who played the Tour B HF2 irons alongside me for a round.  He is about a ten handicap who plays an over the top pull fade with his gamer irons (a very popular, similar profile to HF2), and actually had a difficult time producing his typical fade with the Bridgestone HF2 irons.  He was quite excited about it, and as we continued to play our round, started to have some nice success.  This package is not so significant that it would completely eliminate a shaped ball, but it does seem to support a straighter flight for this sample.

The depths of this review suggest a positive step forward for Bridgestone and that is a welcome sight coming from someone who has consistently rooted for their success in the American market.  They boast a strong technological presence, a great look, and a fair profile on the ball.  The HF2 irons combination of excellent ball speed off the face, and high end sound should place them in a competitive position in this particular market.  Stay tuned on THP for more information on the latest JGR offerings from Bridgestone including the HF1 iron release reviewed by Dean.  For more information on the Tour B JGR HF2 irons, visit www.BridgestoneGolf.com.