Bushnell Golf recently released the newest addition to their Distance Made Simple™ golf line and named it the Neo+ GPS Watch. Some of you may recognize the Neo name from another Bushnell product that featured a bare-bones and simple approach to distance measurement. The Neo+ watch is a unique, but logical progression to this line.

As you can see, this is a very basic GPS unit. It truly is ready to be used as soon as you open the box if you choose. In addition, there are no pictures, maps, or distances to hazards to look at. While some folks will definitely miss having all that extra information, I know some others will find the simplicity of the Neo+ watch refreshing. One additional feature that is included is a simple shot-distance measurement button. This worked quickly and as advertised. I never really liked what it had to tell me, but I can’t blame a GPS unit for my lack of driver distance.

As for simplicity, the Neo+ really is packed with it. When you are ready to play golf you only need to push a button twice and you’ll see a list of courses in the immediate area. After selecting the one you are at, you are ready to play. The Neo+ has an automatic hole-recognition function, so in theory you shouldn’t have to push any more buttons as you progress through your round. I did find that it failed to move on to the next hole occasionally, but it was pretty simple to manually switch to the hole of my choosing by pressing a couple buttons.

Bushnell claims a battery life of around 12 hours while in GPS mode, which should come in handy for those of you that tend to forget to charge your units after every round. I didn’t expect to end up needing that much battery life in a day, but a recent all-day golf event left me appreciating it. I used the Neo+ for right around 12 hours that day and it still had some life left in it. I certainly think it would be easy to play two rounds between charges, if not more. Charging the unit is pretty quick and easy. There is a clip that attaches to the watch and then into a USB outlet.

I found the Neo+ accurate with the distance it displayed when compared to other GPS units and a laser rangefinder. The partnership that Bushnell has with iGolf leaves me confident that the information presented is going to be as up-to-date and accurate as possible. It also seemed to lock onto a distance in an acceptable timeframe when I used it. 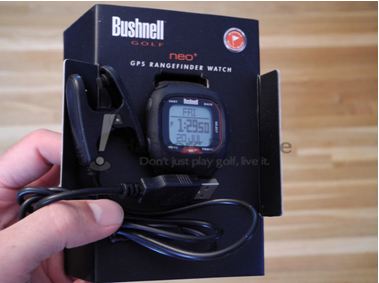 Comfort and Convenience
I will admit to being a little skeptical about wearing a watch as a GPS device on the course, at least prior to this review. The natural questions that I’m sure come to most of your minds came to mine. Would it slip down my wrist? Would it be bulky and distracting? Would it interfere with my swing? I came to find that not only did the Neo+ watch stay in place, but I also never noticed it on my arm unless I needed to check a distance. It is a little larger than your typical wristwatch, but that slightly larger size didn’t bother me. Obviously, we may all have different levels of sensitivity to these types of things, but my personal experience was that it was in no way too bulky or distracting.

The strap on the Neo+ seemed soft enough that it didn’t irritate my arms while allowing the watch to remain absolutely still during my rounds. I wore it for 54 holes in the extremely humid weather of mid-summer South Carolina and it didn’t budge once. That was about as extreme of a test as I could think up and I was impressed. Unfortunately, you still will be victim to a watch shaped tan line, but convenience always comes at some sort of price.

Speaking of convenience, I think that’s where the Neo+ watch really shines. I found it to be extremely easy to use. Whether I was walking with a push cart, riding in a cart, or abiding by the dreaded ‘cart path only’ rules, the watch was always exactly where I needed it. No reaching down to pull it off a belt clip or fishing for it in my pocket was necessary. Instead, I just took a quick glance at my wrist. While I do think that the walking golfer will find it more useful than anybody else, I was pleasantly surprised at just how nice it was to have a GPS unit in such an easily accessible location. 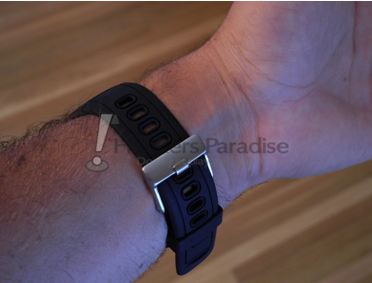 A Customer Service Story
This is just a little side note that I found worth mentioning.

The Neo+ watch comes with over 25,000 pre-loaded courses and doesn’t require any fee-based subscriptions or memberships, but you are asked to set up a free account with iGolf.com within 180 days of activating the device. However, there is recently released firmware update that is supposed to eliminate any iGolf registration requirements. I was unaware of this update at the beginning of this review. While attempting to tie the Neo+ to my existing iGolf account I ran into a couple questions that I needed answered. I called and was connected with a representative named Jeremy in a matter of moments. I really can’t say enough just how helpful and knowledgeable he was. He informed me of the firmware update and actually emailed me detailed instructions, as well as some other information I expressed interest in. I was very impressed with the experience. Good customer service always deserves a pat on the back, so thank you, Jeremy!

Final Thoughts
I certainly recognize that the Neo+ watch isn’t going to be for everybody, but I found it a surprisingly convenient GPS unit. As mentioned before, I think walking golfers will get the most out of it, but it proved to be handy even when I played a riding round of golf. The battery life was excellent and the accuracy proved to be reliable. I always like good surprises and the Neo+ watch definitely falls into that category. For more information, you can head to Bushnells’ website. Also, you can head to www.igolf.com if you would like to know whether your course is included in the 25,000+ that are pre-loaded into the unit. As always, thanks for reading and best of luck on the course this year.