For the past two years, Bushnell Golf has really honed in on perfecting the watch-based golf GPS market and THP has had reviews on both of their previous devices, the Bushnell NEO+ GPS Watch and Bushnell NEO-X GPS Watch. With each version, the company has continued to push the boundaries on the functionality of a wrist-worn GPS as well as the appearance and features.

For 2014, Bushnell is introducing their newest watch GPS, the NEO XS.

Information on the Neo-XS GPS Watch from Bushnell:

Thin, comfortable, long battery life and up to 4 hazard distances per hole.

While the NEO-X offered golfers more battery life than any other GPS watch available, the new NEO XS delivers even more benefits with one button press such as shot distance, four hazards and round odometer, while providing over three rounds of battery life. Additionally, when the product is functioning solely in watch mode, the battery can last 24 months without needing a recharge.

The latest product to join the Bushnell family of devices offering Distance Made Simple is the NEO XS. Bushnell’s lightest and thinnest golf watch is simple to operate and comfortable to wear, giving golfer’s easy to read front/back/center, hazard and shot distance measurements on over 33,000 preloaded courses with no membership fees.

The NEO XS Golf GPS Watch is capable of instantly recognizing courses and has an auto hole advance feature which automatically changes from one hole to the next, meaning the user does not have to push another button the entire round. And while the golfer is out on the course, the odometer feature allows you to track distance, speed, and total activity time.

Available in three colors (Black/Yellow, Charcoal/Orange, White/Cobalt), the NEO XS Golf GPS Watch will be available at Bushnell retailers nationwide mid-February, with a retail price of $199.99.

The new NEO-XS GPS watch continues on the path of evolution which Bushnell set into effect with the NEO+ and NEO-X models. Again, they have managed to take what was already a very streamlined device and make it even more effective and ergonomic. The NEO-XS is not a dramatic redesign or anything of that nature, but rather Bushnell has taken the philosophy of building off of what they already have in place.

The most noticeable thing about NEO-XS compared to the two models before it is the move to a more circular overall design, essentially much more of a traditional wristwatch appearance to most people’s eyes compared to the square look of the NEO+ and NEO-X. Along with the rounded face design, Bushnell has again tweaked the overall size of the GPS and the weight of the device is honestly not very noticeable on the course or through the swing. The band on the unit forms well to the contour of the user’s wrist and offers plenty of length options for users of all sizes. Ergonomically speaking, the NEO-XS is an incredibly well rounded package.

As far as setup is concerned, with the NEO-XS it is literally as simple as pulling the unit out of the box and charging it up for use. The charging system is via the USB cable included, which features the spring loaded clipping mechanism that matches up with inputs on the rear of the watch. After a full charge the unit is ready to head to the course.

Performance is the standard by which all GPS units, golf or not, are judged by and Bushnell has again produced a GPS watch that performs as advertised in both general ease of use and accuracy. Putting the NEO-XS into play is quite literally as simple as putting the watch on, pressing the golf button, and then selecting “Play Golf”. From there the unit will connect to GPS systems and locate nearby courses. After the unit picks up the course options, simply pick the correct course and you are ready to go. 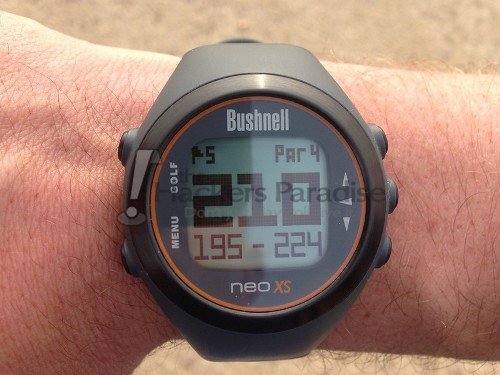 The NEO-XS does feature automatic hole advances as you play through your round based on your geographic location on the course. Should you need to advance to a specific hole because of starting the round at the turn, the arrow buttons on the right side of the unit allow for easy hole changes. In time spent with the NEO-XS it did an impressive job of auto-advancing only when on or near the next tee box and playing from other fairways did not cause the unit to switch by itself. 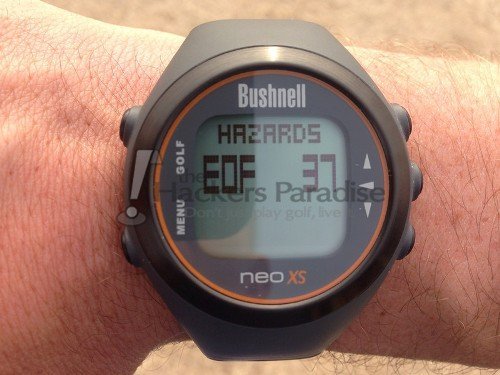 The automatic display on the watch during the round is the front, middle, and back distances of the green on the current hole from whatever location the user is at during that point in time. Additionally, by pressing the middle button on the right hand side of the unit the NEO-XS will provide up to four hazard locations that are illustrated by various three letter codes (all explained in the instructions, but generally really easy to figure out without much thought) followed by the distance to that hazard. The watch also has the on-course ability to measure shots from one point to another with a press of a button. All told, when compared to other GPS units, laser devices and demarcation points throughout the course, the general distance read-outs showed to be incredibly accurate, something most have come to expect from Bushnell devices. 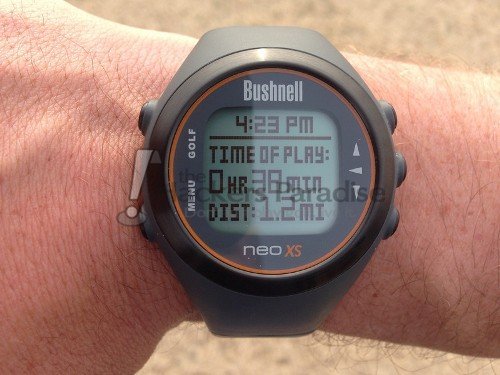 There are a few “extras” as it pertains to the NEO-XS which are honestly nice bonuses to the simple effectiveness and accuracy which it boasts. An auto-off timer makes it possible to conserve the impressive battery life (during review up to four rounds were played on one charge) so that the unit will disconnect from the GPS Satellites after a given timeframe. There is also a pedometer that tracks both the total time of your current round as well as the overall distance you have travelled, an especially nice feature for walkers. Lastly, the “Tee Time Start” feature returns from the NEO-X and gives the user the ability to pre-program the watch for future tee times so that the unit will automatically turn on GPS seven minutes before the tee time and be ready to go.

As a golfer who was admittedly somewhat resistant to the possible usefulness of a GPS watch entering this review, the time spent with the NEO-XS has definitely altered that point of view. With the XS model Bushnell has again affirmed that the GPS watch has a strong future with their continued advancement in design and use. The ability to simply look down at ones wrist and get the numbers necessary to confidently pull the proper club from the bag is as easy as it gets. Although the NEO-XS doesn’t offer a scorecard feature or the flashiest interface, it does what it is intended to do and does it very well. For anyone considering a new GPS unit for the course, Bushnell’s NEO lineup should certainly be on their short list to try out.

For more information on the NEO-XS and all of Bushnell’s golf distance measuring products, be sure to look at their website, www.bushnellgolf.com.