Golfers who have either purchased, or considered purchasing, a distance measuring device are probably familiar with the name Bushnell. Bushnell carries a number of products that make obtaining a distance to the green easier for golfers. Whether a player prefers a GPS or a Laser Rangefinder, Bushnell has them covered. At the 2016 PGA Merchandise Show, the company unveiled two new product lines, a GPS watch, and a new series of Tour V4 Rangefinders, which is the focal point of this review. 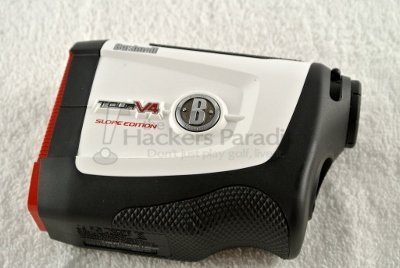 The perfect combination of speed, accuracy, slope and JOLT. The Tour V4 Slope uses our patented, Tour trusted Slope Technology to provide compensated distances based on the hole’s incline/decline. 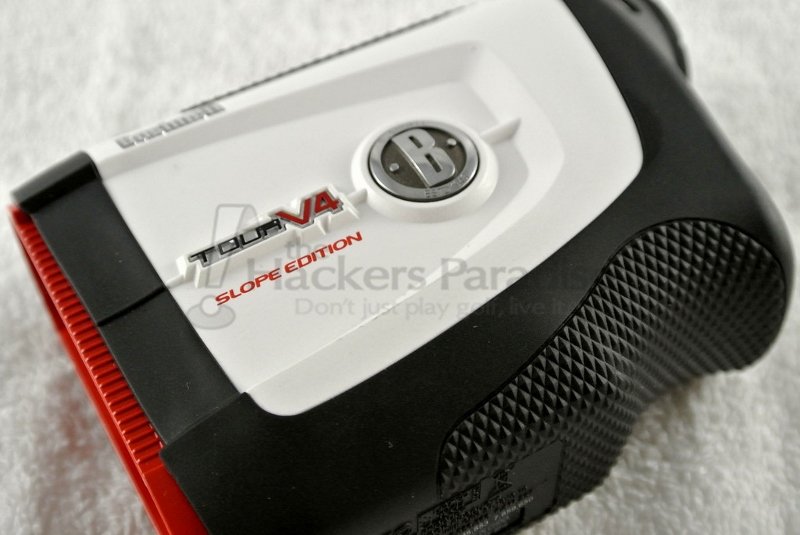 Rangefinders come in many different shapes and sizes, each with a different feature set as well. The Tour V4 comes with a list of impressive features and specifications, which should make it a device near the top of the list for any golfer looking to add a rangefinder to their bag.

Pull the Tour V4 Rangefinder from its included case, and one will immediately be drawn to the small size of this unit. In fact, according to Bushnell, the V4 has been slimmed down by 30% compared to the previous generation Tour v3.  Not only is it smaller in size, but it also comes in with a weight under six ounces, leaving golfers with a rangefinder unit that is compact and light compared to others on the market.  Also, for those golfers who like to carry their bag, adding a lightweight rangefinder is a bonus to help keep the heft of the bag lower. The new ergonomic design allows for the V4 to fit comfortably and naturally in the hand. Along the bottom is a small notch for players to rest their thumb, and just like the top part of the V4, this area is textured to ensure a better grip. 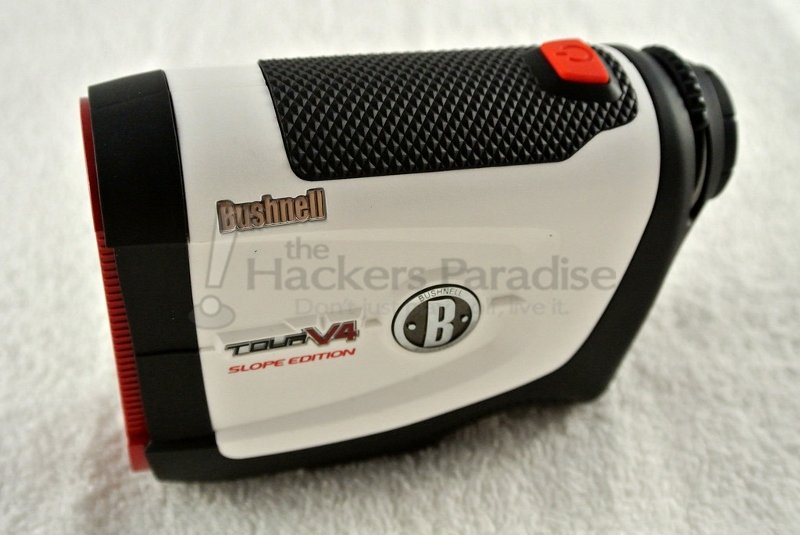 Perhaps the number one standout feature that is present on the Tour V4 is what Bushnell calls JOLT Technology. When peering through the eye piece of other laser rangefinders on the market, the ability to know the device is properly picking up the intended target can sometimes be one that requires a bit of guess and check. Often times leaving a golfer shooting a target multiple times to ensure they are getting a consistent yardage. By utilizing Pinseeker with JOLT Technology, the Tour V4 gives off a slight vibration, or jolt, once the target has been properly acquired. With the combination of the Pinkseeker icon on the screen and the buzzing from JOLT Technology, there is little doubt that the target has been properly acquired, and the yardage that appears of the screen is the precise distance that remains for the next shot. 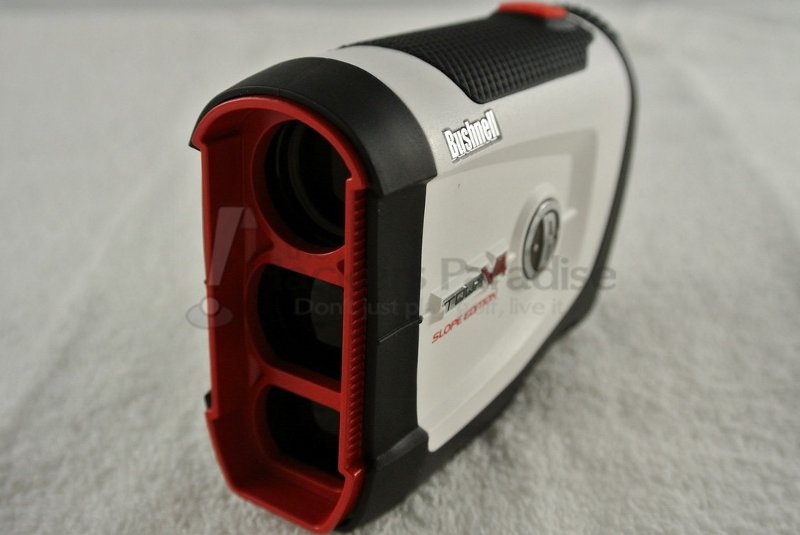 Having a clear view of the target is obviously a very important aspect of using a laser rangefinder. The magnification level of the Tour V4 lineup is rated 5x, which produces a much closer view, so that golfers can get a better look at the flagstick. To help maintain a clear image Bushnell has revamped the focus mechanism. On previous models one had to rotate the eye piece to ensure the shot was in focus.  New for the Tour V4 is a single slide focus that can easily be done with one finger. The beauty of this is that while gathering a distance, one can easily shift the focus slide with the index finger, providing a faster path to a precise view and yardage.

Slope Edition – What is Slope? 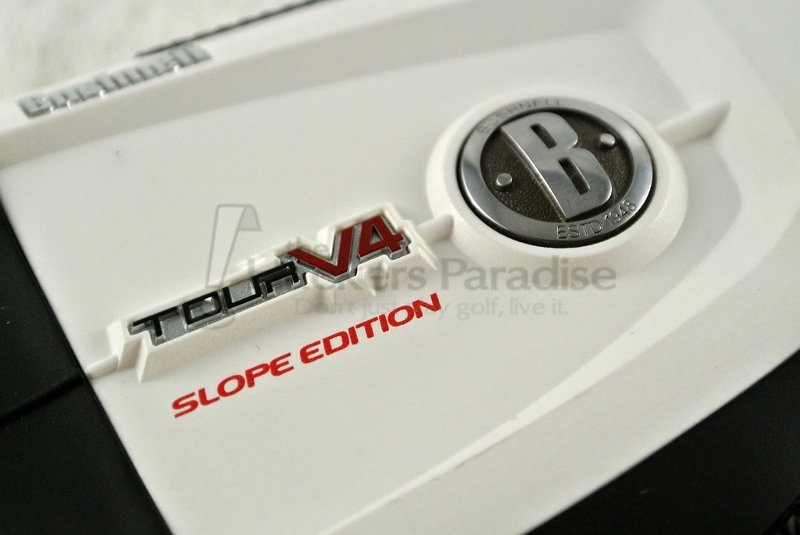 Similar to the Tour Series in the past, the V4 comes in both a Slope and Non-Slope Edition. When it comes to talking about using slope on a rangefinder, there are always some questions that seem to come up. Often the first question is what the slope function actually accomplishes for a golfer. Slope is a special mode that takes the initial reading of a flag or target and produces the true yardage readout. While continuing to hold down the power button, below the readout golfers will see an adjusted distance, which is based on the elevation change. If the pin is 6 degrees higher than where the ball currently lies, the yardage will play long, and vice versa for a pin that is lower than the ball. That readout will assist players in selecting the proper club from the bag, as a flag that is targeted at 175 yards can truly play at 190 or 160. For many golfers, the change in playing yardage results in a change of club. 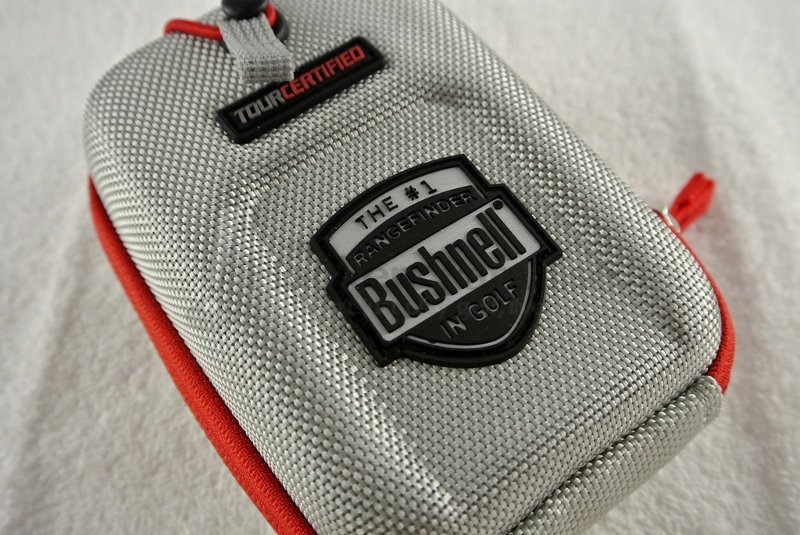 Bushnell rangefinders have been very strong in the performance category in recent years. The tour V4 Slope Edition is no different. As was mentioned earlier, the V4 uses JOLT Technology, and while that seems like a feature that might not necessarily be needed by most, it certainly is one that proved to be very beneficial when capturing distances. While the vibrating sensation is what will be noticed, the speed in which the V4 picks up the target and filters out the background objects, is a feature that continues to get better within the Bushnell family of products.

Jumping between modes and units of measurement requires a bit of patience the first time out of the box. There is only one button on the V4, therefore, it controls everything. That means that the same button that is used to shoot the target, is the same one that will be used for choosing the mode of operation. The V4 can produce measurements in both yards and meters, allowing for both slope and non-slope readouts for both. When trying to switch modes, players will need to hold down the power button until feeling vibrations. The rangefinder will vibrate three times during each mode, and the screen will show which mode is the current selection. It may seem tricky the first time going through such a process, however after doing it a couple of times, it becomes second nature. 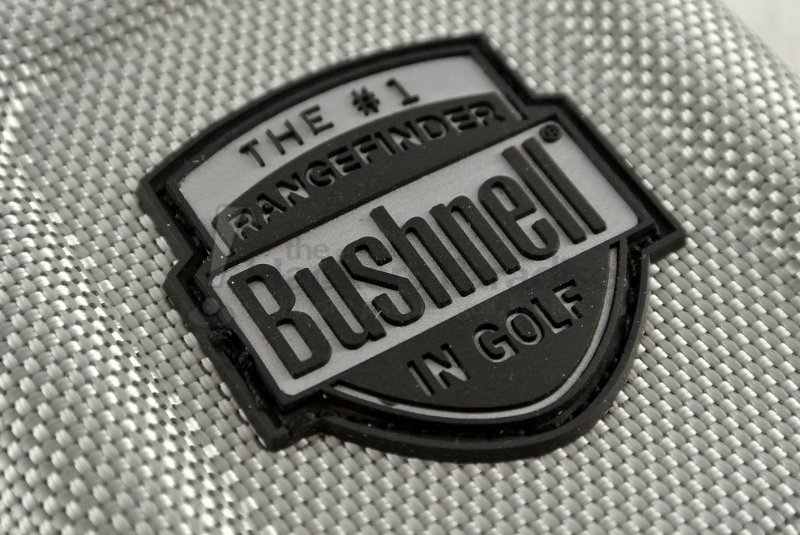 Bushnell has continued to produce top notch distance measuring devices to make the game more enjoyable. When it comes to the Tour V4, and Tour V4 Slope Edition, they didn’t try to remake the wheel. Instead what we get is a product that is smaller, lighter, and faster, all while continuing to offer the great features like JOLT Technology, a rain proof design, and a fresh ergonomic shape that is comfortable in hand. Hitting the store shelves in early April, the Tour V4 is priced at $299, and $399 for the slope edition. More information on the new Tour V4 series can be found at www.bushnellgolf.com.