There is a lot in a name, and the Big Bertha namesake is one that is known throughout the golf industry. It is a throwback to a time when names of clubs caught the attention and imagination of golfers. Big Bertha meant performance and distance. After a time away, Callaway is re-introducing the Big Bertha in 2014 with two separate models, the Big Bertha and the Big Bertha Alpha. THP was fortunate enough to get a chance to conduct in hand testing of the new Big Bertha and see how it measures up to the shadow cast by its name.

For the purpose of this review the 9-degree Big Bertha with the stock Mitsubishi Fubuki Zeta shaft was put into play.

Callaway on the Big Bertha Driver:

The Callaway Big Bertha is a Total Performance Driver that debuts our Adjustable Perimeter Weighting – an innovative sliding weight that can be moved around the perimeter of the driver head to help individuals produce longer, straighter drives. Much longer. Much straighter.

There’s a new continuous Adjustable Perimeter Weighting slide toward the rear of the club. That’s why Big Bertha has 20% higher MOI for more forgiveness AND an INFINITE NUMBER of Draw and Fade bias options. As you might expect, it all amounts to longer, straighter shots. And those are good things.

Increase or decrease your loft (up to +2° or down -1°) and adjust Draw or Neutral bias, optimizing your launch, backspin and dialing in your preferred shot shape. In a few clicks, you’ll be fit for maximizing your distance with more accuracy.

A high strength, lightweight crown that improbably weighs only 8 grams. And by saving weight in the crown we get: Adjustable Perimeter Weighting, a deeper CG for more forgiveness, and low spin with a lighter, more preferred swing weight. And because you get all of that, it’s pretty clear that when you add more adjustability to a driver, you’ve got to have Forged Composite.

Why is our new Hyper Speed Face design so groundbreaking? Well, it’s lighter (as in 10% lighter), hotter, and more robust than ever before, increasing ball speeds all across the face. You probably hit it dead center every time, but even if you don’t, our longest Total Performance Driver ever has you covered. That’s why there’s long, and then there’s “Bertha Long!”

Obviously the name itself brings certain aesthetic thoughts into the minds of those who remember the history of the Big Bertha, but Callaway didn’t simply rest on the laurels of the past with this one. Instead they have brought a look that is just as unique as the name itself.  Traditional looks, yet at the same time as outside the box as the technology in the driver head. It’s a hard line to walk and make it work, but Callaway did here with the new Big Bertha.

The Big Bertha driver is a 460cc head with an extremely well balanced and traditional overall headshape from address as well as in hand. The face has a good amount of depth to it and the contrast that the brushed face has with the crown of the club actually can serve to aid in alignment. Additionally, the way the new “Adjustable Perimeter Weighting” was implemented into the design is impressive. Aesthetically it just fits in with the entire design, and no matter where the weight is set to it looks balanced, well thought out and implemented compared to the moving weights we have seen in others. 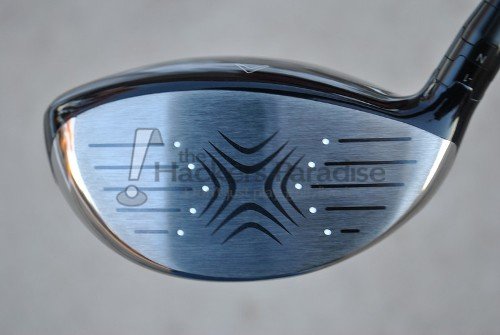 With both the Big Bertha and the Big Bertha Alpha, Callaway is applying a blue and red scheme that stands out from what we have seen from them in recent years. The majority of the head is finished in a metallic blue paint scheme both on the crown and the sole with the color being brighter on the sole of the club and fading into a much deeper blue on the crown itself. In fact, without looking closely, many will not realize the crown is blue when out on the course. This is a very good move as the club will appeal to both traditionalists and the generation of golfers who prefer a little more color. The red accents combined with the chrome on the sole of the club tie everything together incredibly well into what might be the best looking driver that Callaway has released in years. 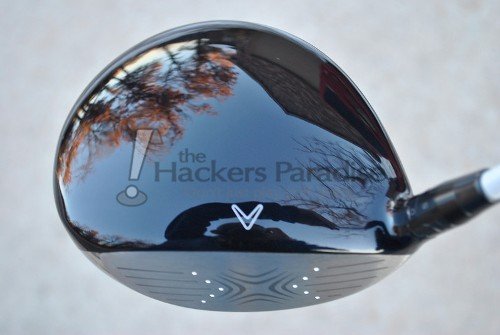 Last year Callaway made strides and set new self standards by producing what many felt like were some of the best all-around sounding/feeling drivers on the market. This year it’s safe to say that they have continued on that path by achieving something impressive with the Big Bertha, a unique sound/feel fitting for such a unique name. 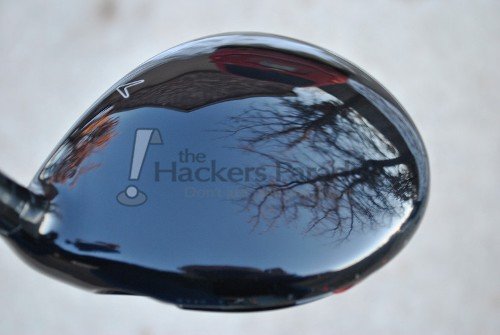 The Big Bertha features an immensely solid tone off of the face with a complete lack of the hollow, tinny, or even harsh feedback typically associated with any type of head featuring moving weights or composite materials. This solid tone leads to an equally solid feel that is reminiscent of the days of the much smaller driver heads of yesteryear. All told the feel off of the face could be called incredibly addicting, even on misses. Contact on different areas of the face still provides ample indication to the user of misses through both sound and feel, but in a manner that avoids the harshness we see with some drivers. It is evident that Callaway understands the importance of sound as it relates to feel for users and they have invested themselves in insuring that they get it right.

The Big Bertha is by nature  a mid-low spin performer and all of the technology both in the head and the shaft choice of the Mitsubishi Fubuki Zeta lightweight shaft lends to creating a mid to mid-high ball flight which can be tweaked and  tuned user to user. By now the advanced hosel technology of the redesigned Opti-Fit adapter we saw debut with the Optiforce is well known, with ability to adjust both face angle as well as the loft of the head in both directions. However, when it comes to the ball flight seen off of the Big Bertha the real star is the Adjustable Perimeter Weighting (APW). 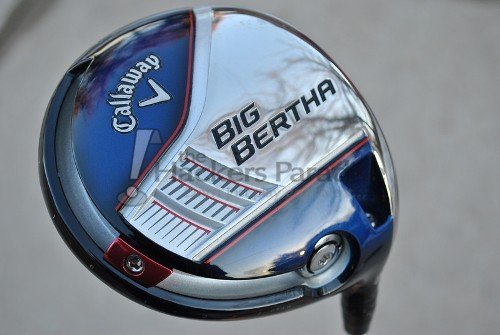 The first thing one notices about the Big Bertha in hand is the sliding weight around the perimeter of the club, the APW. Uniquely, although other companies have released drivers with sliding weights on them, Callaway was actually the first to patent their sliding weight. By placing the sliding weight on the outside perimeter of the head Callaway claims it has increased the MOI of the driver as well as truly having an impact on the ball flight with its various fade or draw biased placements. In testing the driver with multiple users who all possess their own consistent ball flights (natural fades or draws) the APW showed to do just what it claims. By moving the weight in the rear of the club the ball flight could be visibly altered from their natural patterns to various degrees based on the setting chosen. The major commonality though was no matter the setting of the fade/draw, the head itself simply wants to hit piercing mid-high launching drives time and time again with impressive consistency.

While all of the effects of the APW and shaft pairing technology in the head are impressive, the Big Bertha name has always stood for one thing – distance. Callaway has pulled no punches in saying that the Big Bertha name was not brought back for nostalgia, but was brought back to show that drivers could hit the ball longer and to showcase what the company has achieved with all of the science that has gone into these heads. 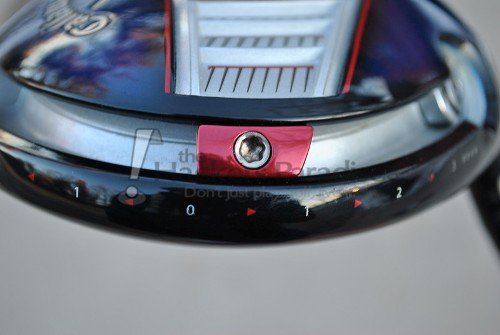 The APW of the Big Bertha has allowed for a significant increase in MOI compared to previous Callaway drivers and that has been combined with their use of a lighter shaft as well as the lightweight forged composite crown to move the CG of the head lower. All of these things have played a major role in impacting spin and forgiveness. During review, the Big Bertha lived up to the claims put forth by Callaway by showing improved distance when tested head to head with other heads matched with the same shaft and loft setup. Time and time again and in a myriad of different settings the spin and high MOI launch characteristics showed that it certainly lives up to the tradition of the Big Bertha name.

The areas of dispersion and forgiveness are undoubtedly where the Big Bertha shined the most during review. The revamped hyperspeed face combined with the MOI improvements of the APW as well as not moving the CG forward has created a driver that provided an impressive amount of both lateral and vertical face forgiveness. 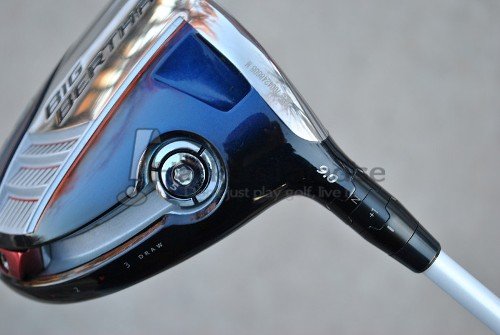 Although there is no club that is a remedy for a bad swing, cross face misses on the Big Bertha were time and time again met with much less penal results than anticipated. Particularly off of the toe and both toe/heel side high off of the face the ball maintained a more playable line and much less distance loss than typically seen. That is not to say that there is not a loss of distance compared to center strikes, but it is evident that the hyperspeed face has certainly been improved and as a person who misses across the face it is exciting to be hit with a much lesser drop-off.

With the return of the Big Bertha to the Callaway lineup alongside its brother the Big Bertha Alpha it is obvious that many people’s eyes will be on the groundbreaking gravity core technology the Alpha features. However, there is no doubt that the Big Bertha is a technological standout in its own right, and with its spin and launch characteristics alongside its high MOI design, it will fit the majority of amateur golfers out there. The Big Bertha is an impressive conglomeration of so many of the things we golfers look for in a driver and lives up to the name that Callaway bestowed upon it.

The Big Bertha from Callaway has a price point of 399.00 and will release on February 14th of 2014. For more information on the Big Bertha be sure to check out www.callawaygolf.com.