Big Bertha is one of the more recognizable names in golf.  If golfers were asked what they think of when they hear that famous name, the popular responses would center around distance and forgiveness. The history of the Big Bertha driver is why such responses would be heard. However, distance and forgiveness is not something that is exclusive to drivers, and Callaway has proven that with their newest iron offering the Big Bertha OS, super game improvement irons.  By incorporating a new Exo-Cage design, Callaway Golf believes the Big Bertha OS will become the ultimate super game improvement irons. 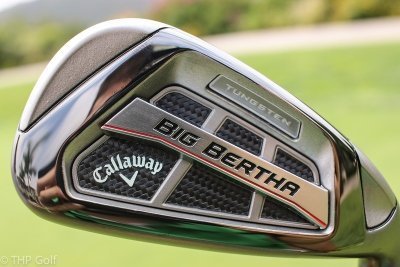 The heart of the Big Bertha OS irons is the new Exo-Cage Technology. Similar to what is found in the Big Bertha Fusion driver, Callaway was able to build this iron by pushing the weight to the surrounding areas of the club head. The Exo-Cage allows them to save weight, which can be used more efficiently in other areas of the head. Thanks in part to some of the weight savings, they are able to utilize a Tungsten-Loaded Standing Wave deep in the irons sole design. According to Callaway, they have used just about 100 grams of tungsten throughout the set, and the use of this material helps keep the weight, and center of gravity, low within the head to promote higher launch. 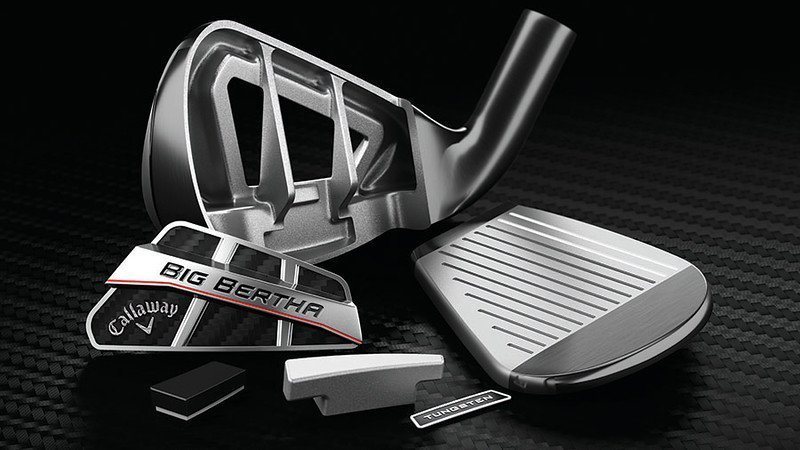 Callaway has been known for their use of face cup designs, and for the Big Bertha OS irons, the company has added a Next Gen 360 Face Cup. They feel this new face cup design will assist in producing faster ball speeds, which is key to helping players hit the ball further. By combining this updated face with the Exo-Cage, the expectation is that golfers everywhere should experience an overly forgiving, high launching iron.

While designed to fly high, Callaway was able to create these irons with a Progressive Center of Gravity. This is something that has been talked about in many iron and wedge sets over the years. The long irons have a lower center of gravity to help launch the ball high in the air, while the higher lofted irons have a slightly raised center of gravity which helps promote a bit more control of the golf ball when trying to flight it into the green. 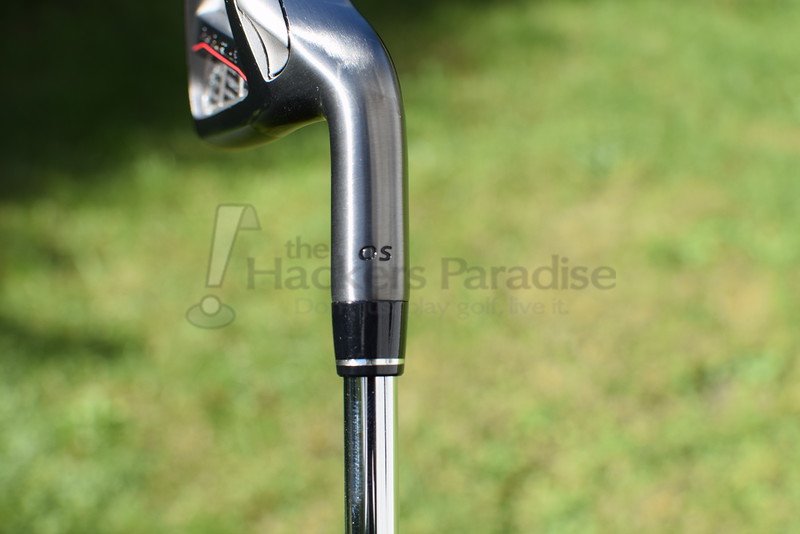 Golfers who are in the market for an oversized iron should like what the Big Bertha OS has to offer. It is clear from the minute these clubs are set up at address that they are made to deliver superior game improvement qualities. Seemingly everything about this iron design is big, including their wide sole. This design has a multitude of benefits to the golfer, including helping those who tend to hit a lot of heavy shots, because the sole will assist in keeping the club from digging on the steepest of swings.  They also play a major role in getting the ball up in the air for people who struggle with launch.

Moving from the wide sole, consumers will take note of the amount of offset and thicker topline that these employ. The offset is very noticeable, but for golfers who are not bothered by that look, they will enjoy the benefits of that extra bit of help. The dark, smoky nickel finish that Callaway has gone with does it’s best to mask the thickness of the topline. It is still going to catch the eye of many, however if someone can get past that, they will quickly notice that it does a nice job of helping to frame the ball. While playing on a sunny, cloudless day, the look of this finish really does pop. However, as with most darker finishes, over time there will likely be some visible wear. 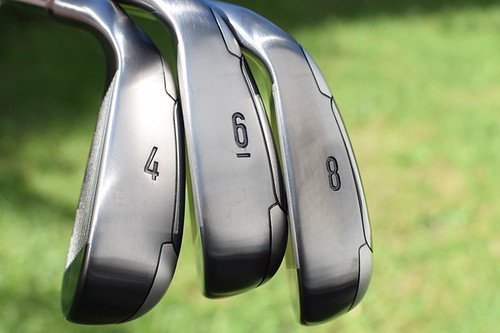 The back of the cavity is where the Exo-Cage design is highlighted. Featured on the badging, which ties in nicely with the crown of the Big Bertha Fusion driver, there are two bars that stretch from just under the topline down towards the sole. Inside the badge, those two stabilizing bars are what helps make up that Exo-Cage structure. Visually the badge is pleasant looking with the black carbon fiber background, and audibly the sound produced by simply giving the crown tap, is a loud tink, which helps accentuate the hollow body design. 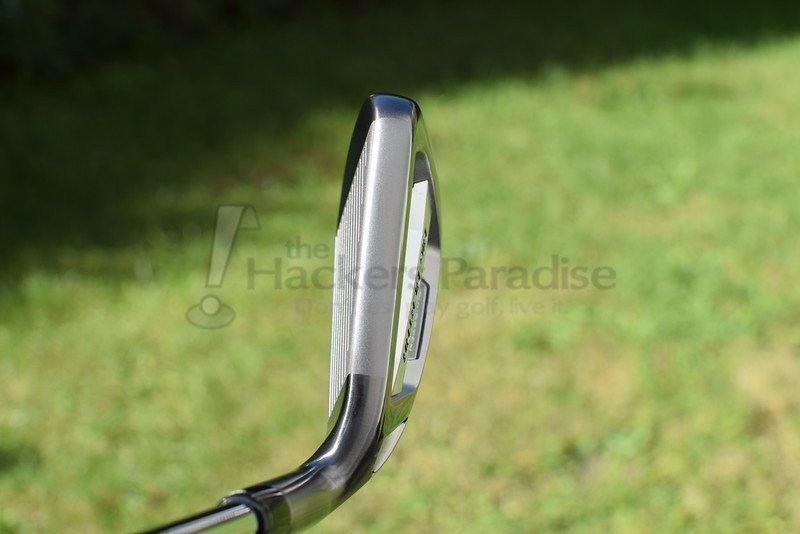 As mentioned earlier, players who are in search of a higher ball flight will probably enjoy what they get with the Big Bertha OS irons. Thanks to their construction with the offset, wide sole, and low placed tungsten weight, the flight that is achieved can be described as towering. A quick glance at the iron specs would lead one to believe the stronger lofts would create flatter shot trajectories, but that is a stark contrast to the results experienced from this reviewer. Even though these irons are a lower spinning set, the high trajectory that is achieved does a good job of making sure those long approach shots land and remain on the green.

Speaking of the long irons, the performance they provided was a pleasant surprise. With hybrids becoming more and more popular, hitting a long iron, for some, has become a thing of the past. However, the Big Bertha OS 4-iron proved to be an effective club for both finding positions off the tee, as well as being effective for lay-ups, long approaches, and the occasional punch shot. 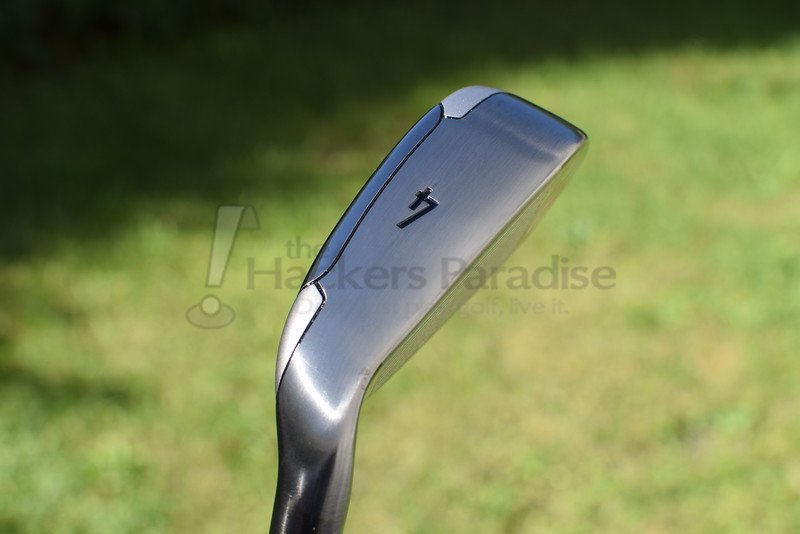 Ever since Big Bertha came out of retirement, a big point of emphasis associated with the name has been ball speed and distance. Yes, drivers tend to bring more attention to those aspects, but these irons do a very good job of producing numbers that should garner the attention of many. When testing these irons alongside of a set of Callaway XR irons, the results were impressive. The Big Bertha OS 7-iron produced 2.5 MPH more ball speed, which translated to five more yards of carry. As with most clubs on the market, individual performance gains will vary. One thing to note on distance gains, as the lofts got elevated to the scoring clubs, the yardages that were manufactured could be considered more normal.

Make no mistake about it, the Big Bertha OS irons were built to achieve distance, but that’s not all. Thanks to the Exo-Cage, hollow body design, and 360 face cup, these irons are set to be one of the more player friendly iron sets on the market. Ever since Callaway began using their face cup technology in their irons, players have been rewarded with forgiveness in areas where other irons might not excel. Giving credit as well to low and deep center of gravity, the miss that is low on the face still allowed the ball to elevate enough to achieve a well above average result. Even the miss on the toe side did not produce an overly strong right to left miss, which is seen at times with other offerings. When stepping up to the ball with an iron of this size, and the technology behind it, it gives a real confident feeling that contact can be made all over the face, while still yielding some good results. 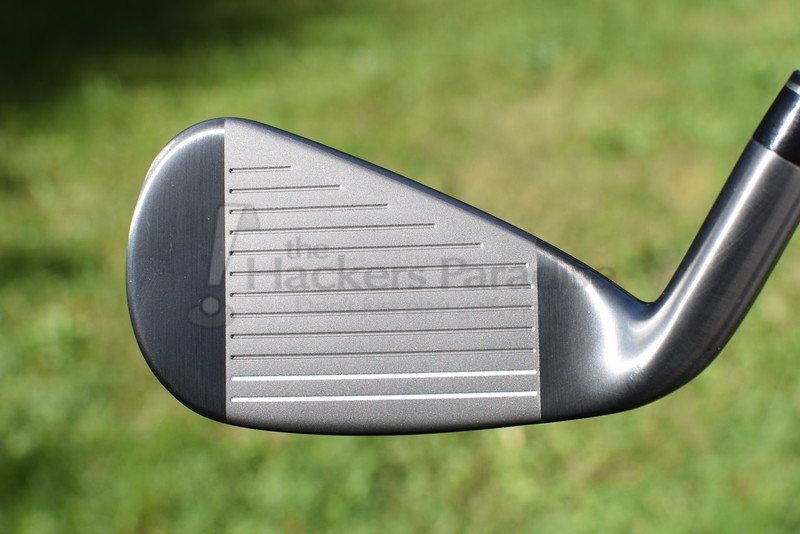 Often times when super game improvement irons are talked about, they are given that point and shoot moniker. These irons certainly do have that ability, but when dropping down to the scoring irons, there is more than meets the eye. By employing a progressive center of gravity design, the CG location in the scoring clubs is slightly elevated within the head compared to the long irons. With this type of design, the ability for flight manipulation is not completely lost within this set. Being able to control the shot trajectory is something that helps players score better, and that type of shot is often a bit difficult with irons that are engineered to fly high. 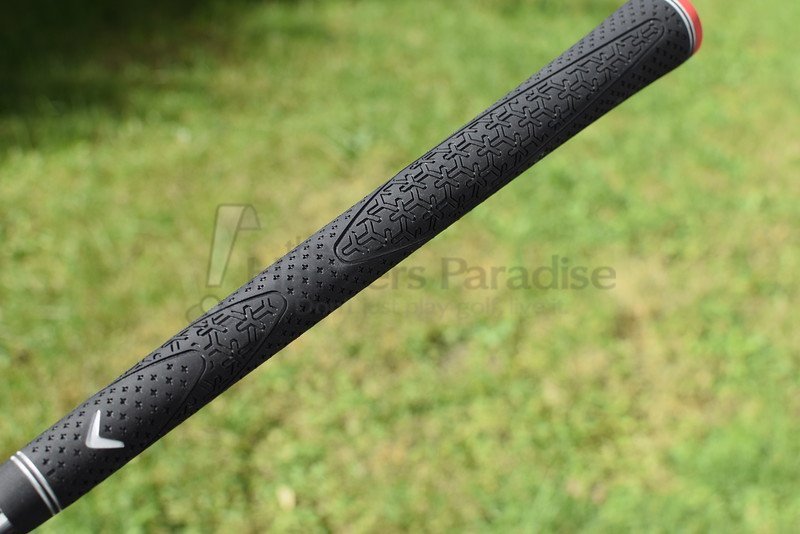 When Callaway produced the Big Bertha irons back in 2014, the sound was unique and head turning. For this updated version, they have made some strong strides to help mute the audible feedback that is produced. With that being said, due to the construction of this type of club, it will undoubtedly sound more like a hybrid than it will a solid iron. Even though the sound is a bit more muted than the previous version, it’s still different enough to give the iron a second look after taking a swing. One area in which the sound was vastly improved, was when transitioning from the long irons to the mid. Those longer irons now have a much fuller sound to them, which is another welcomed evolution. 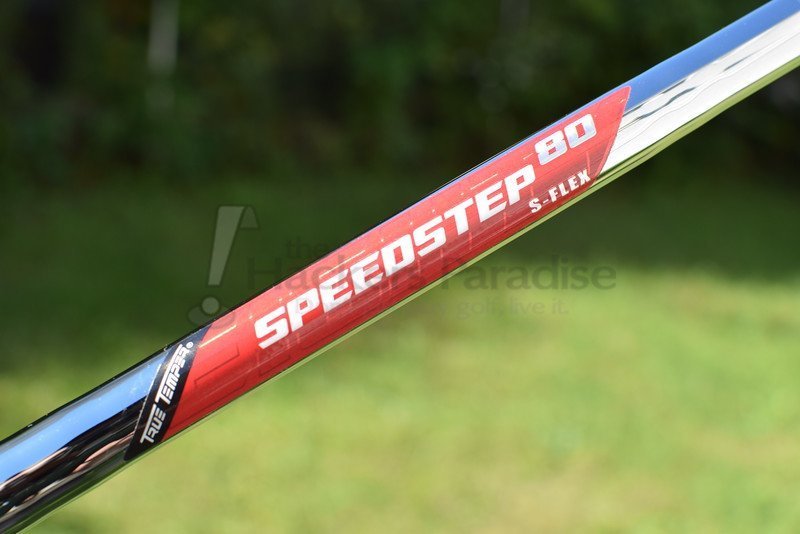 These irons will probably not appeal to the lower handicap golfer due to their size and offset, and that’s ok. They are meant to be a super game improvement iron that will help the double digit player achieve more consistency from their iron game. With a plethora of technology packed in to this design, Callaway has given players a set of clubs that will be a high performing set in terms of distance and forgiveness. Those interested in purchasing this set can do so for $1,099 for the steel version, and $1,299 for graphite. More information on the Big Bertha OS irons can be found at www.callawaygolf.com.