Although this release period has been much talked about on the internet for Callaway, there really should not be as much surprise as we saw from some. With the Big Bertha V-Series driver Callaway is simply flowing in the trend they established last year both from a timeframe and design ideology standpoint. The company has been very forward about their goal to provide a driver option for all portions of the golfing spectrum as it pertains to launch and spin. The V-Series, like the OptiForce before it, is doing just that with a focus on aerodynamics, weight, and speed in a package that fits in well with the Big Bertha namesake.

A lighter club (starting at 290 grams) helps create more clubhead speed and the kind of ball speed that makes the ball go a long way. Faster swing speeds also come from the aerodynamic shaping that lowers drag through the entire swing. And Forged Composite material in the crown is lighter, leading to maximum clubhead speed. They’re all crucial for maximum distance in V Series.

The adjustable hosel lets you choose from a combination of 8 different loft (-1, S, +1, +2) and lie angle (Draw or Neutral) configurations to find your optimized trajectory and shot shape. When you get those right, great drives are sure to follow.

One more way that we give you more speed in the Big Bertha V Series – an ultra lightweight Mitsubishi Bassara Shaft in the 10.5-degree and 13.5-degree HT heads, and a Fujikura Motore Speeder 565 in the 9-degree head.

As with the OptiForce last year, Callaway has said from the start that the goal for the V-Series is to bring lightweight and speed into the picture for those that need it. Much like the Opti, there are many aesthetic clues that hammer their concept home when held in hand. Right away the eyes are drawn to the curves and angles on the bottom half of the club. Gone is the strange crevasse from the Opti and instead a peak runs the centerline of the sole with depressions on both sides intent on funneling the airflow in the most effective manner possible through the swing. What is most interesting about the aerodynamic design here is that it looks astoundingly like the old Big Bertha Warbird sole, which really makes the “Big Bertha” preface to the V-Series fit well. 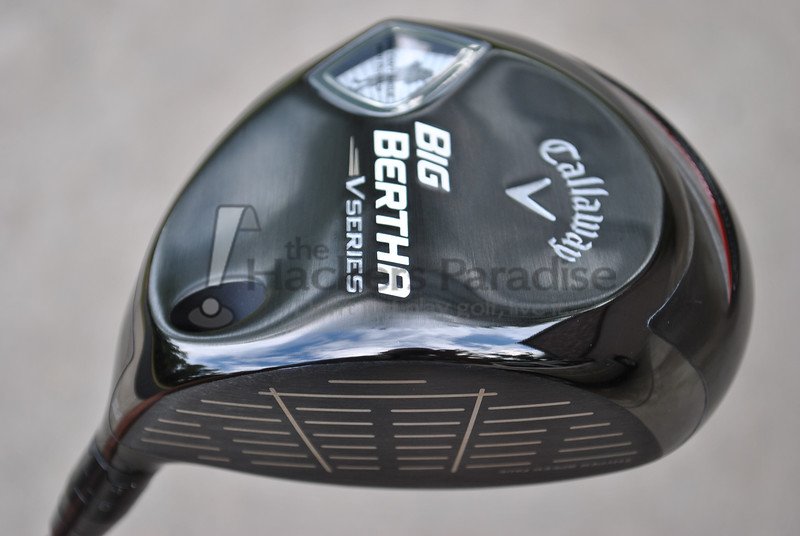 At the rear of the head Callaway has inserted an emblem containing their Sir Isaac logo rather than the standard bevel the Warbird had. Though it is an aesthetic piece (which looks much better in hand than initial images), it actually is made of a material that aids in saving weight for distribution elsewhere in the design. It certainly won’t appeal to everyone, but it is identifiable. 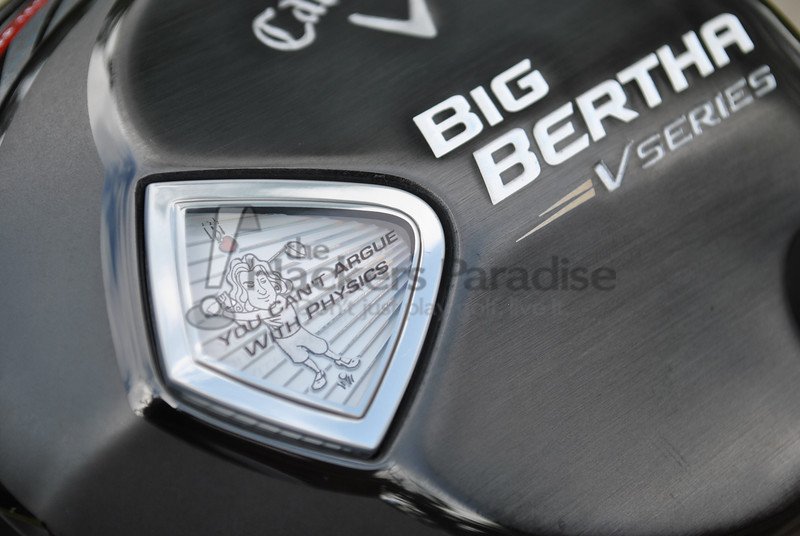 The throwback look of the sole continues onto the black finished face of the V-Series with the retro groove pattern of the old Big Bertha heads (they are NOT true grooves). For all of the retro aesthetic elements that the driver has it is good that Callaway didn’t go overboard and also tied in modern features. For example, the two channels on the side of the head possessing red and silver accents that when looked at closely actually have Newton’s formula for kinetic energy in there, a subtle yet clever element. 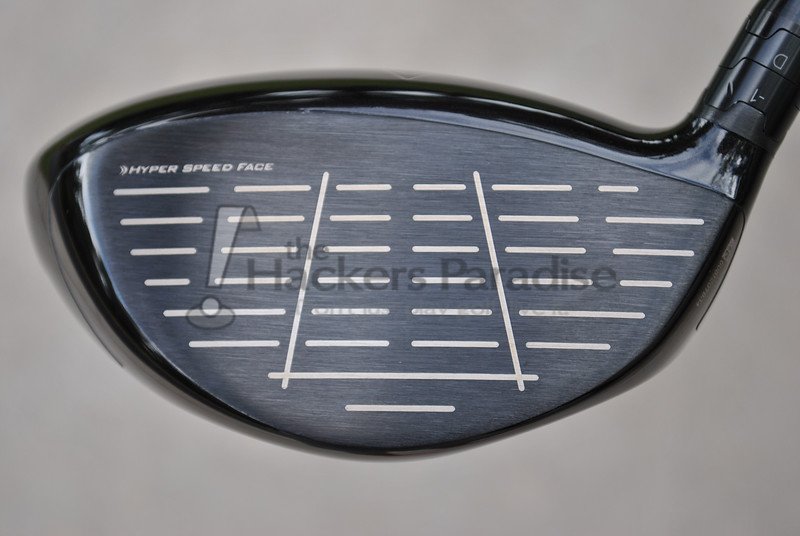 The look is rounded out with a simple deep black metallic crown to compliment the face and sole finish without looking too abstract. Thankfully they have also avoided use of crown graphics like we saw with the OptiForce 460 last year and the only marking on the top of the club is the traditional chevron alignment aid. All told, it is a relatively simple look when compared to the Big Bertha and Big Bertha Alpha, but being that the whole emphasis of the V-Series is on speed, it only makes sense that the design is straight forward in its nature. 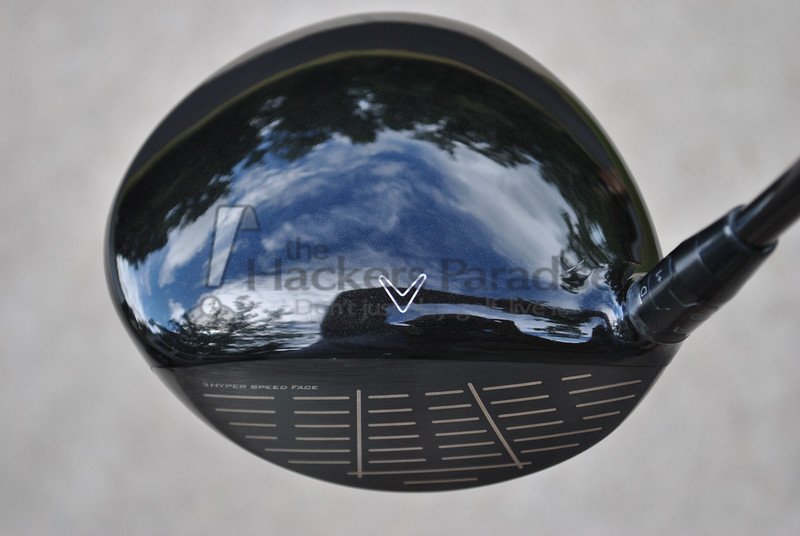 One thing that Callaway has consistently gotten “right” for an extended period of releases has been with the sound/feel of the drivers at impact. The return of the Big Bertha moniker with the Alpha and standard Bertha confirmed that with two heads that sounded different but also incredibly well rounded. With the V-Series that trend continues with a sound that is different than the other two heads, but keeps a unique blend of solid for feedback on strikes across the face and also a sensation/resonance of really getting the ball to jump off of the face. What is most impressive about this is that they have again taken a composite style driver and prevented it from sounding completely hollow and obnoxious like we so often get. It is solid, but in a way that is all its own. 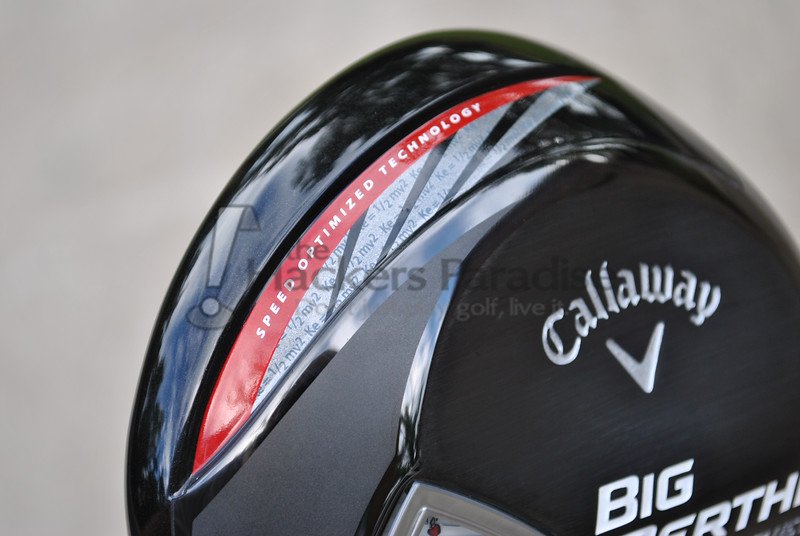 The Big Bertha V-Series is built for speed, a design intended on helping those who need to generate more swing speed and thusly more kinetic energy at impact in order to increase overall distance. In order to achieve this, Callaway has gone all-in with their Forged Composite material in the crown in order to facilitate movement of weight and combined it with detailed aerodynamics to make the head as effective as possible at transferring energy while also maintaining a lightweight overall package. In fact, the V-Series can come in as light as 290g overall depending on the setup (23g lighter than the standard Big Bertha). When you pick it up for the first time, you know it is a lightweight setup. 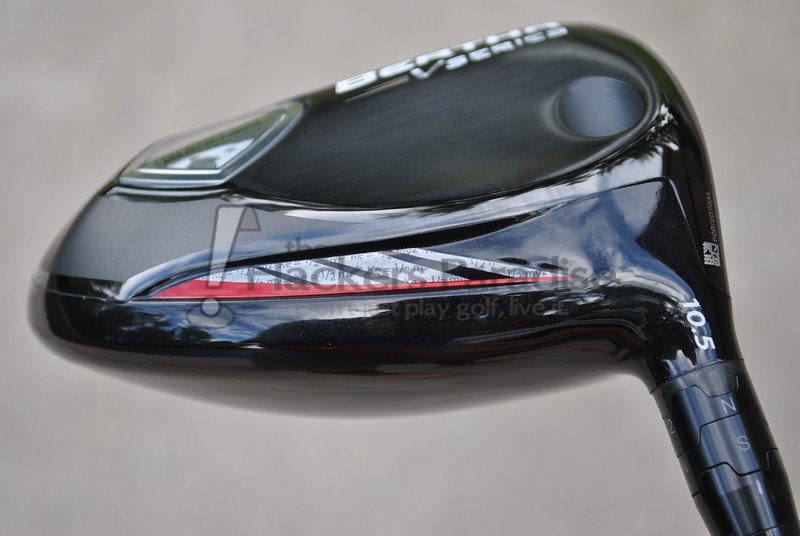 Callaway also has included two shaft offerings with the V-Series just as it did the OptiForce last year. For this review in the 10.5 degree head it was the Mitsubishi Bassara E-Series. The playing length of the club comes in at 45.5” in order to aid in the speed generation, but in the opinion of this reviewer that length is still a bit much for many golfers out there. The shaft itself though is a follow up to the 2008 F-Series and with new tech they saved 5-8g depending on the flex being played and did so without sacrificing any tip stability. For many out there, light shafts are still misconstrued as weak, but that is a notion that really is not accurate at all anymore. 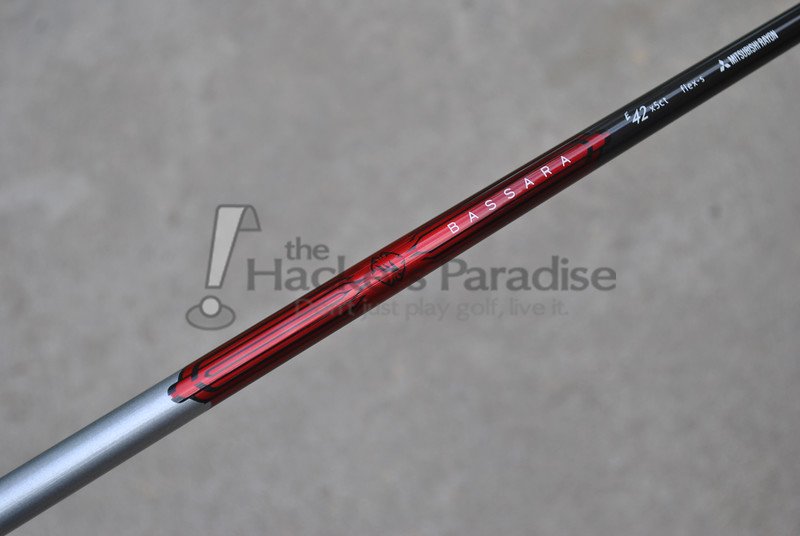 Light, aerodynamic, and fast is the name of the game when it comes to the standard setup with the V-Series and Callaway has found a solid balance here without sacrificing playability or control. Testing with multiple players over a wide range of swing speeds showed that the V-Series is nothing short of a launcher putting out impressive launch angles (higher than Bertha in same loft/shaft as well as several other current OEM offerings) with only a marginal increase in spin and a solid jump in overall ball speed, which for this reviewer meant a good jump in overall carry distance. The setup provided for incredibly consistent numbers and the E-Series Bassara at no point had any issues keeping up with swings across the spectrum. 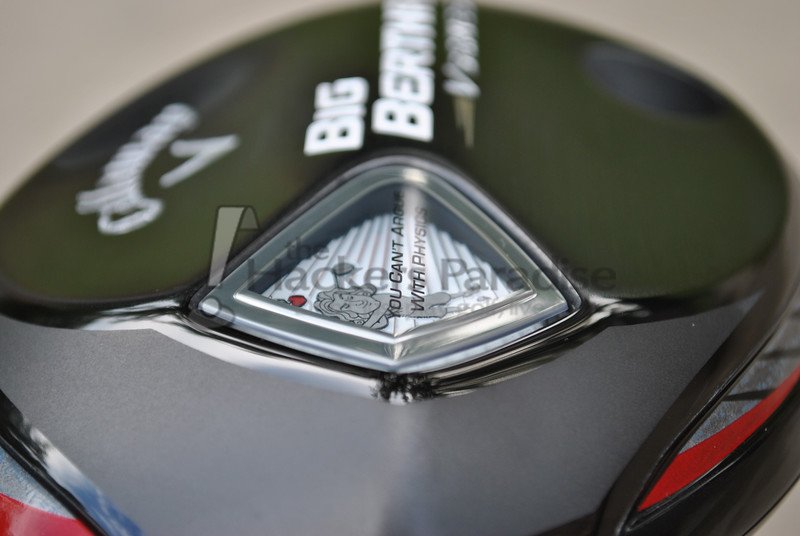 Yes, the V-Series is absolutely light in hand, but in the swing this reviewer was still able to track the head throughout, which shows a good balance of the overall design. Clearly no shaft will fit everyone, but the E-Series has been paired with the V-Series Bertha with the intentions of hitting the target audience of golfers who could use help in generating more speed to see more distance and it does its job well. It should be mentioned that the head utilizes the same dual-cog Opti-Fit adapter that Callaway has used on the rest of the line, making for easy interchanging and adjustability. In fact, this allowed for the head to be paired with more standard weight (58-72g) offerings, showing that it is adaptable to fitting and tuning as needed beyond the Bassara and Speeder options (though swing weighting should be kept in mind here). 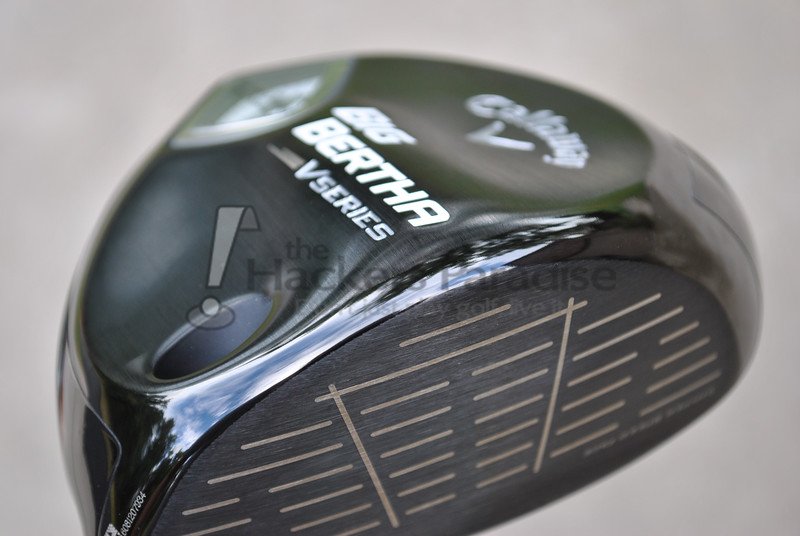 Another impressive aspect of the driver is that thanks to the application of its Hyper-Speed Face, which took a major step forward with the standard Big Bertha, the V-Series has legitimately improved here. During testing, ball speeds were recorded across the face and were compared to the standard Bertha. Here, the V-Series showed better averages heel and toe side as well as missed high on the face. Undoubtedly, this has something to do with the general ball speed jump that was seen out of the head by its lightweight design, but regardless of that the results were clear both on the range and most importantly on the course. Distance losses on misses are still there, no head will erase that, but the V-Series did not show a major propensity to have an increased gear effect on misses which has been seen before in lighter designs and for this reviewer meant the ball was kept in play more often. 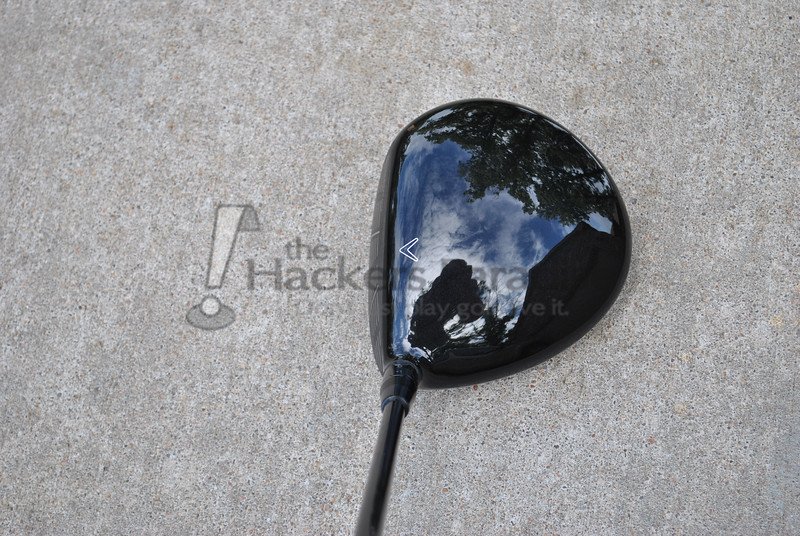 Callaway talks about the V-Series Big Bertha as being a head for those seeking added speed, but more specifically testing showed that this design also lends itself to those looking for more overall launch and more spin than the other offerings in their lineup. Though it will not fit everyone in its standard lightweight form and some will be disappointed at the absence of non 460cc option like the Opti-Force had, it does seem to be a head that is receptive to broader fitting for those looking for the aerodynamic features and simple basis on speed and launch that it touts. No matter where you sit on debate the lightweight driver setups, having an option like this within their lineup only produces a more well-rounded set of choices for golfers of all needs and in the end the performance is there as well.

The Big Bertha V-Series driver has an MSRP of $399.99 and more information on the driver, the options, as well as the rest of the V-Series lineup can be found on their website www.CallawayGolf.com.