The new Epic Forged irons from Callaway are not for the faint of heart, both in price and claims.

The definition of a concept club with no corners cut, the second iteration of the Epic irons is aimed firmly at the premium market, and Callaway believes wholeheartedly they have taken things to another level. 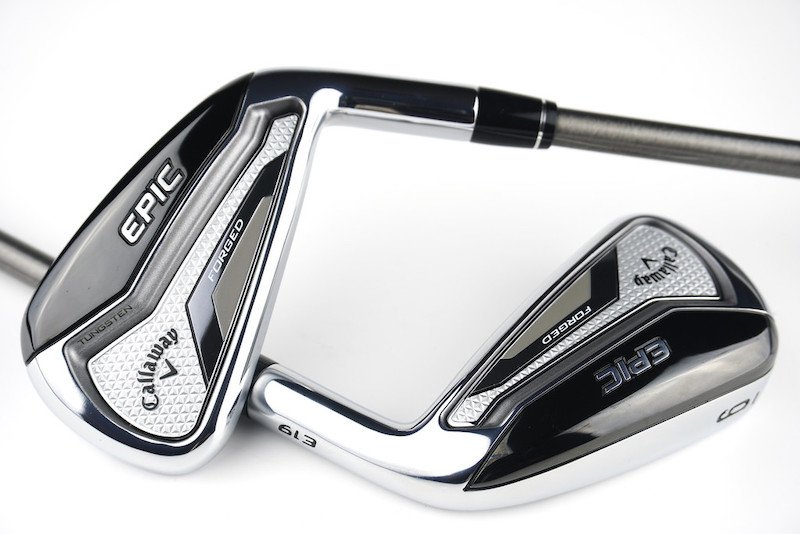 Quick Take
At $300.00 per club, there is a lot more to take in than just the looks of the Epic Forged irons. With that said, Callaway has accomplished design features never done before in irons and the results get as close to backing up the price tag as possible. Filthy distance, vastly upgraded looks, and an overall impressive sound/feel round out a high tech and high-performance package.

So Shiny
Right into the fray, the Epic Forged irons are a big leap from their predecessors. Where the Epic and Epic Pro irons last go-round seemed to focus only on the tech and performance, with these Callaway aimed to also address the looks, and so they have.

The Epic forged have got curves in all or the right places, and with the goal of creating something that looked ‘striking’, the angles, the flow, the finish, and the badging all come together to pull it off. Based off initial release pictures I was unsure how the PVD section on the club would look and wear, but in my time with the 5i and 6i it has been pleasantly durable, and in-hand ties things together quite well. Plus, with so many materials in play, some seen and some not, it makes sense to build a look that represents that. 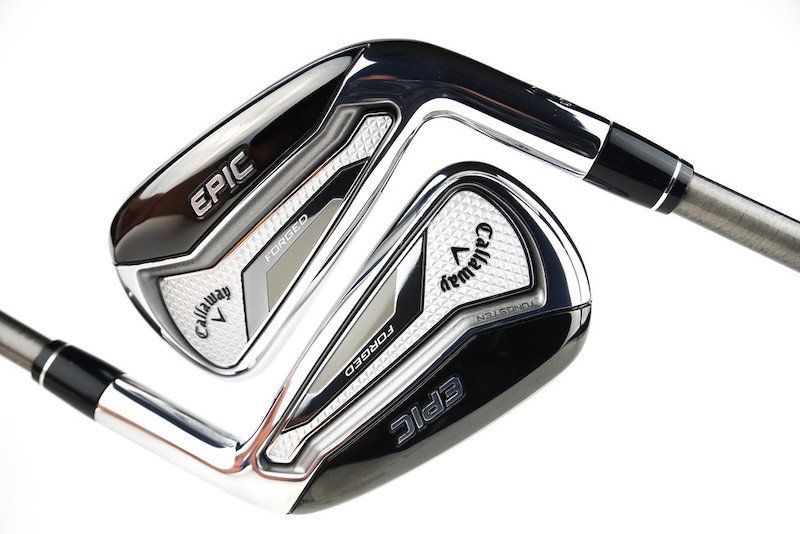 There is a little junk in the trunk of the long irons I got to play for this review, namely on the rear of the club near the sole, but for me it wasn’t visible at address. Speaking of that address look, these look quite good there, the topline is trim, the offset is minimal, and even as someone who isn’t a huge fan of polished chrome the look there ties these together well. I think people who get to see these in hand will be pleasantly surprised.

Definition of Cutting Edge
You want tech? The Epic Forged irons have got tech. Callaway let their R&D hounds loose on this one and it shows. Frankly though, at $300.00 an iron, it should show.

Right out of the gates Callaway moved to 1025 forged carbon steel, hence the forged in the name of the clubs. The reason behind this was a simple one, sound/feel. That is the area where the Epic Forged irons predecessors had the most consistent critical feedback from people and the decision to move to 1025 CS was a big step towards correcting that. However, that move came with the necessity to find a way to apply the face cup while letting it stand up to the forces of impact. 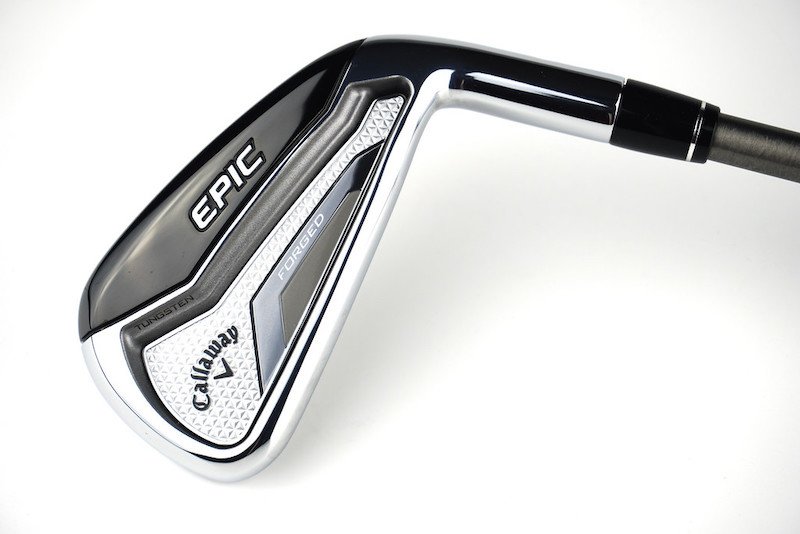 The 360 Face Cup is still present, alive, and well. Using many of the methods they did with the Apex irons, Callaway managed to make the design work, and work it does. As has been the case with every Callaway iron I have hit with Face Cup, the ball comes off hot and retains a ton of speed on misses. The rest of the tech picture makes that aspect work even more.

The Epic Forged are the first irons where Callaway has used a suspended tungsten weight which allows them to tune each iron within the set more precisely than possible in the past. But, to suspend MIM’ed (metal injected molding) tungsten in its purest form, they had to find a way to suspend it since it isn’t weldable. Enter the TPU (urethane) jacket around the weight and then the use of urethane microspheres which have literally millions of tiny air pockets that allow the weighting to stay in place through impact because of how they respond to force. 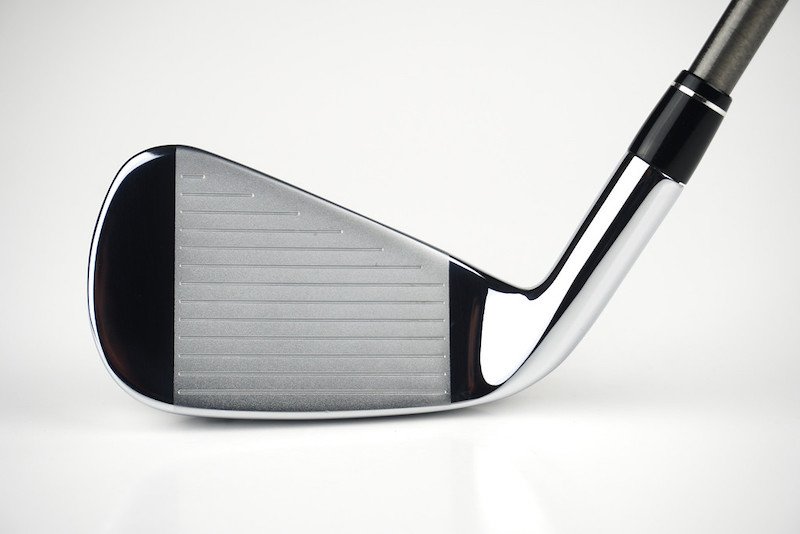 Callaway also applied a new VFT milling to the irons which is like what was done so successfully in the Apex 19’s. This milling means to help combat the downfall to such strong lofted and high ball speed clubs by adding a little spin to the equation to create more consistency and less fliers. While I wasn’t working with the entire set of irons and cannot speak on the effects of VFT through the set, the spin numbers on the 5 and 6 irons did stay higher than I expected. Still lower than the Apex 19 5 and 6 irons in my bag, but much closer than I ever anticipated. 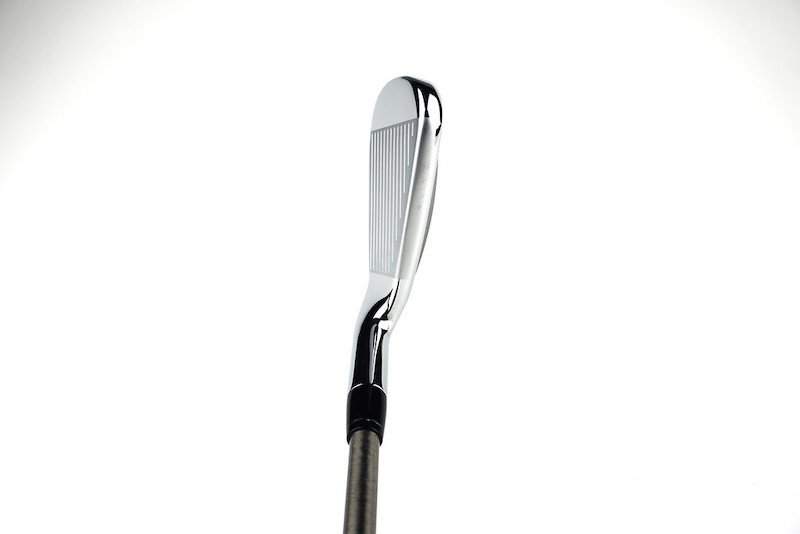 Lastly, the stock steel shaft for the Epic Forged…isn’t steel at all, thoughsteel is in the Steelfiber name. The new FC line specifically are what I’m talking about here and they come in 70/80/90 weight/flex setups. For the review, the irons I played have the FC 70 in them, which is admittedly not a good fit for me in the equivalent of regular flex. Having history with Steelfiber shafts I expected them to play more stout than stated flex, but that is not the case here, these really seem to be a departure there. The last thing to address here is the length, at standard they are now ½” longer than the last release, but that is compared to true steel shafts, since these are actually graphite, it makes sense they come in at the slightly longer length. 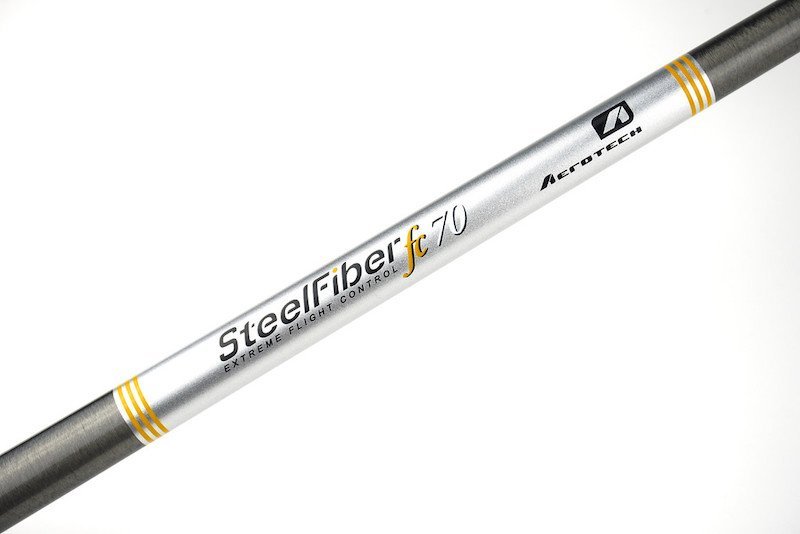 Playing the Long Game
Getting around to the point, the 5 and 6 iron that I spent time with on the course as well as the Foresight GC2 were pretty eye opening when it comes to ball speed and distance. Both outpaced the 5/6 that I’m currently gaming (Apex19) by essentially a full club. As you will see in the data below, the speeds were quite high, the spin was definitely on the lower end, but not nearly as low as I saw with the previous Epic irons. 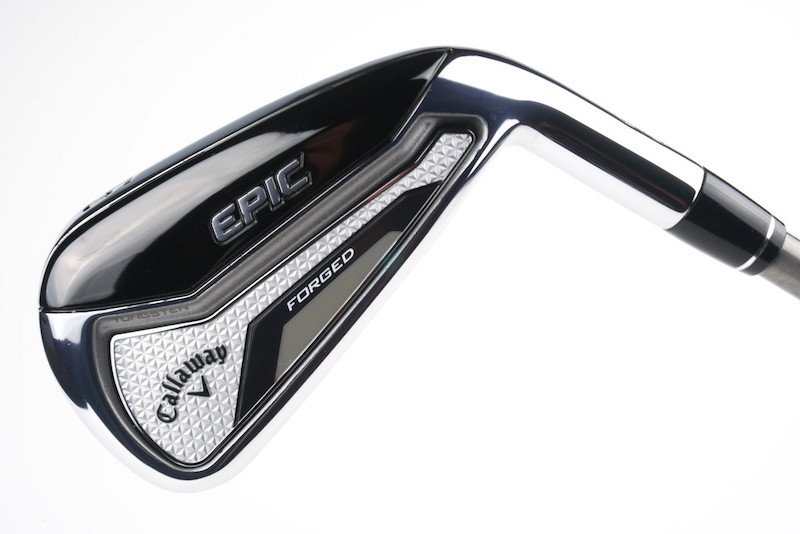 The feel at impact is pleasant, with well struck shots giving a concise feedback that is on the firm side, but absent that obnoxious ‘clack’ that the Epic and Epic Pro irons carried with them. I will say though, on significant misses that we mere mortals have, they do get a little clicky overall. The changes made to materials and the application of urethane microspheres worked, there isn’t much to nitpick on the sound/feel department. 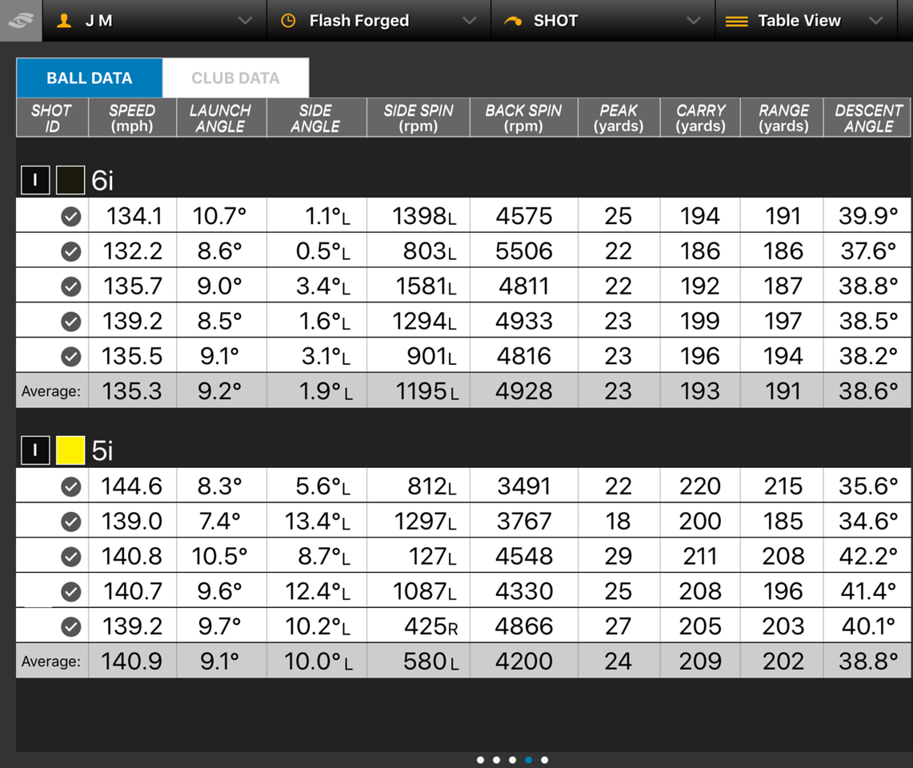 In play, the long irons did well through the turf and there weren’t any issues when it came to digging. As the data will show, the flight wasn’t as high as I anticipated, and though I know typically too weak of a shaft leads to the opposite problem the overall weight of the setup being as light as it was to me undoubtedly had me compensating in my swing which will skew things. What is certain even through that though, these are rocket launchers and I will most certainly be experimenting with a more proper fitting setup after this review.

Where Do They Fit?
In the end, I was left with the question about just where these fit into the bag.

Working with just the 5 and 6 iron makes for an interesting conclusion in that regard. For most golfers, I think they could make some killer “utility” irons, which could conveniently make that per club price point seem much more palatable, though that isn’t at all Callaway’s concern with these premium irons. For me, it would necessitate a redundant club in my setup, likely two six irons, but the filthy distance possibilities here make that an enticing proposition. All that said, a full set of these could be a lot of fun, while some will point to the lofts and the distances while asking where it leaves the scoring portion of the bag, the decision by Callaway to expand the wedges in the set with a GW and AW makes that less of a concern.

These aren’t going to be for everyone, be it price point, lofts, or whatever it may be…but, they are a lot of fun, and there will bea group out there who enjoys them. Plus, if all the cutting-edge design of a set like these trickles down to future Callaway releases, then the better for all of us consumers.