It is evident that in recent years the path that Cobra Golf has chosen to take is one filled with R&D innovations and advancements mixed in with plenty of bright colors. This year that very development is clearly visible throughout the entire Bio Cell lineup, but when it comes to pushing their R&D to the limits, no piece of the 2014 lineup from Cobra stands out as much as the new Bio Cell+ Driver. From top to bottom the technology within this head rivals that of any other OEM out there and with it Cobra plans to break aesthetic and performance molds.

Cobra on the Bio Cell+ Driver:

The BiO CELL+ driver is designed to deliver maximum distance, forgiveness and control.

Features a new multi-material crown design (T.O.P. Technology), Cell weighting in the crown and face to optimize MOI and CG placement, and 8 loft settings that allow you to tune the driver for maximum distance to match your swing. Discover mid-high launch, very low spin and blazing ball speeds for optimum distance all packaged in a 440cc Head.

For the purpose of this review THP was able to spend time with the Bio Cell+ driver paired with the stock Matrix Red-Tie shaft.

The first thing noticed about the Bio Cell+ is the two-tone appearance of the crown. This is not just for aesthetics, but is part of what Cobra calls their T.O.P. Technology (Thin, Optimized, and Personalized). Obviously the “Personalized” section of this has to do with the various color options that are available with Red, Blue, Orange, Silver and now Black. 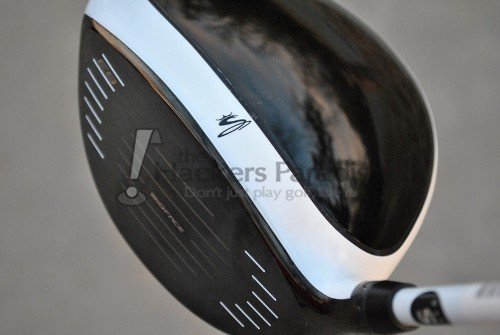 Where things get more interesting however are with the “Thin” and “Optimized” portion of the T.O.P. Technology. The Bio Cell+ actually accomplishes this in a twofold manner; the use of an all new material in golf club application, Venollum, and the through Bio Mimicry.

The Bio Cell+ is essentially a composite driver that doesn’t feature Carbon Fiber like the ZL lines did. Instead it uses Venollum, which is a material previously used only in planes because of the cost of use. The material boasts a much improved strength-to-weight ratio than Titanium 6-4 and is 16% lighter than the crown of the Amp Cell was. However, Cobra didn’t stop with a new material. They also brought nature into the mix through “Bio Mimicry”, hence the Bio name in the lineup. In nature we see structures like honeycombs, where despite a lack of overall surface material and weight, are just as strong as a solid structure. In golf R&D it is all about fighting for grams and Cobra has seen that the application of these “cells” into the inside of the crown results in a lighter and thinner crown that allows for weight manipulation in the head without sacrificing strength. 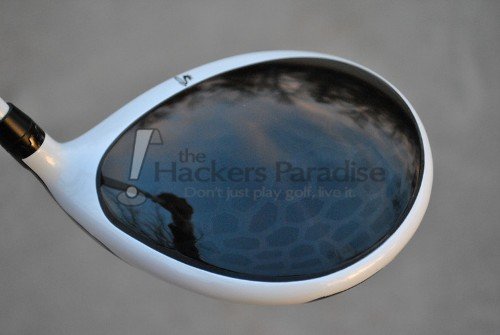 When combined, the Bio Cells and the Venollum have allowed for enough weight movement to significantly lower the CG without having to move it forward and sacrifice forgiveness, as is the trend with some others. In fact, the Bio Cell+ is the lowest CG driver that Cobra has ever produced and has a 50% lower CG-to-neutral than the Amp Cell and 25% lower than its Bio Cell brother. In extended time spent on range, on course, and on monitor with the Bio Cell+ driver, the lower CG allowed for launch angles that were extremely playable considering the much lower spin numbers than its predecessors. 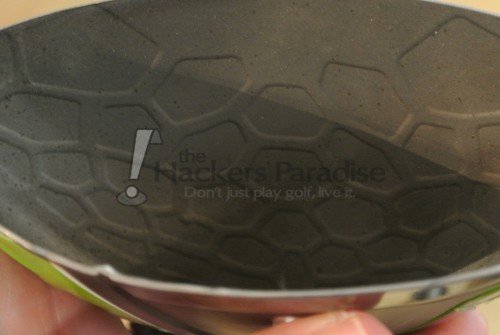 Aesthetically, because both the Venollum and Bio Cells are new applications, rather than blending them in like other composite type heads, Cobra elected to let them be seen. For the Venollum they have utilized a contrasting finish of white pearl on the main body and feature one of the different color options within the line where the Venollum is. The Bio Cells are also shown by utilizing a very light paint scheme on the crown, which is the exact location, size, and shape of what is going on inside the head. Although the look is definitely different than we are used to, the pictures really do not do it justice. The contrasting colors and the 440cc head set up behind the ball in a way that inspires confidence, and like it or not, the contrast stands out and gets people talking about why it looks like it does.

Cobra has also taken what has already traditionally been one of the most forgiving face structures in any driver lineup, the E9, and added two bio cells to it. Located on the left and right side of the inner E9 face, these two cells serve to remove overall weight and also to increase the “Sweet Zone” as it pertains to overall ball speeds and their retention on strikes across the face. In simplest terms, compared to the Amp Cell, Cobra claims that the Bio Cell+ with the E9 Bio Face will allow for longer and straighter drives, especially on misses. Testing with the driver certainly indicated much validity to these claims, as misses were surprisingly resilient as far as the overall smash-factor drop-off and general length and line that the shots took. It particularly shines on strikes on the inside half of the face, as though there is a spin increase it does not result in extremely penal misses compared to other “players” category drivers out there. 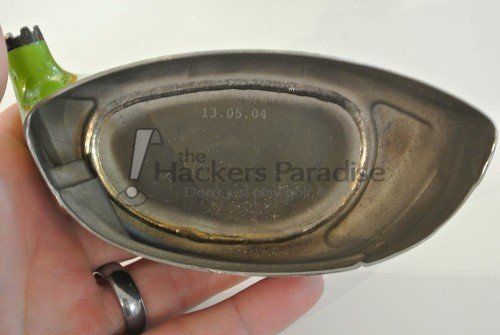 With the Bio Cell+ driver, Cobra is sticking to its SmartPad Technology as it pertains to the way that the club sets up neutrally at address regardless of the loft setting being utilized. This is what allows Cobra to have so many lofts condensed into one head. What is changing however is the adapter, with the 2014 line of drivers coming with the new MyFly8 Adapter. This version of the adapter allows for the Bio Cell+ to play at 8 different lofts from 8-degrees up to 11-degrees, with three of those settings being draw biased. Noticeably missing this year are the fade settings. According to Cobra, after communicating with their top fitters there was a truly small amount that were ever fit into those settings, whereas an exponentially larger amount were fit to a draw setting, hence the change was made. Concerns should be quelled for some in that the Bio Cell+ actually has a fade-bias setup by design. 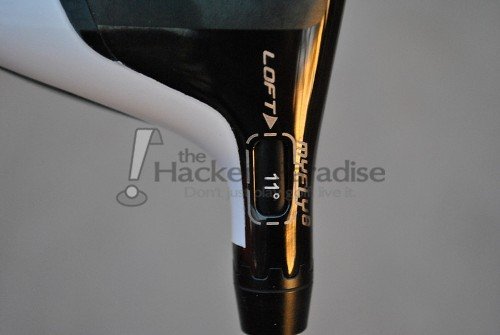 In testing, the MyFly8 provided the trajectory and flight alterations that golfers have come to expect out of an adjustable hosel such as this one. The adjustments as always with Cobra are easy because of the window cutout in the heel, ensuring it gets set at the loft desired. Thanks to the SmartPad, no matter the setting of the driver (through all loft options), the visual change from an open/closed standpoint remains quite neutral. It really is one of the cleanest and most effective setups for club loft adjustments.

Cobra has elected to pair the mid-spin and mid-launch Matrix Red-Tie 6Q3 with the lower spinning Bio Cell+ in order to fit a larger margin of golfers. To answer any concerns, despite the pearlescent white finish on the shaft this is not a proprietary version, but is the “real-deal” Red-Tie with a different paint scheme that won’t clash with the various head colors offered. Although the Red-Tie pairing is intended to hit the largest part of the bell curve off the shelf, Cobra is also offering two other no cost “real-deal” options for others in the Mitsubishi Diamana D+ 72 and the Project X PXv Tour 52. 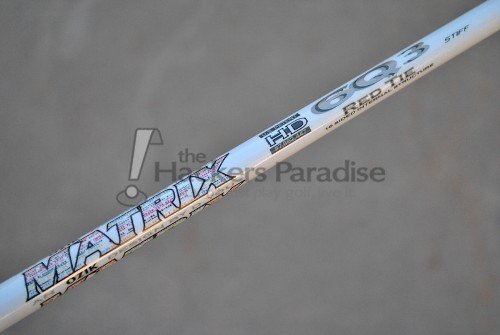 Testing showed the Red-Tie to be quite an interesting combination with the head. Despite its mid-spin nature, the setup maintained spin numbers on the lower side of the spectrum for this particular tester. This is intriguing in that it showed Cobra did succeed in putting out a much lower spinning head than in recent years, but also one that could seemingly hit many in the fitting spectrum from a spin perspective when you mix in the other shaft options.

There is clearly a tremendous amount of R&D that went into the Bio Cell+ and that has led to a driver that is a sizable departure from the Amp Cell and the Amp before it. The idea of being lower spin while retaining solid launch characteristics and improving ball speeds to allow for added distance/forgiveness is quite the set of goals. However, time spent with the driver certainly shows that Cobra has accomplished much of what they set out to achieve. 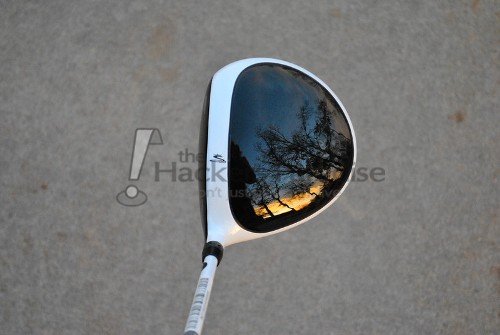 The Bio Cell+ driver is definitely unique both aesthetically and performance wise. The 440cc head is a classic shape that stands out even with the color combo demanding the initial attention. Despite featuring a different crown material than the rest of the body, the sound does not have the hollow and more audibly significant traits that past composite drivers from Cobra have had. Instead, it boasts a lower overall tone that upon impact is much more pleasing and solid to the ear. Time and again in testing the Bio Cell+ showed spin numbers that placed it firmly within the low-mid range while launch angles that made for a noticeable increase in distance from the Amp Cell before it and situated it firmly in the upper margin of overall distance compared to other drivers. 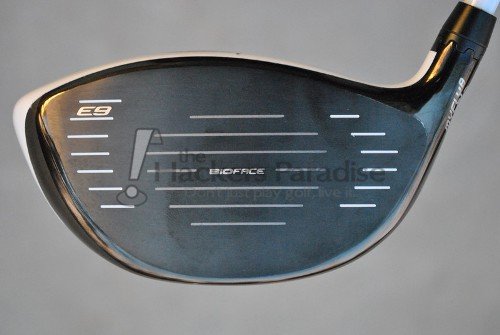 The standout aspect however was the performance of the modified E9 face, which in the Bio Cell+ is one of the deepest faces out there despite the smaller 440cc head size. The face size inspires a ton of confidence and it does what Cobra claims, as misses both heel and toe side retained much more ball speed when compared to the Amp Cell. Basically they took a driver that was already considered to be one of the more forgiving out there and improved it all, something that cannot be overlooked. However, this is certainly still a “players” driver and its lower spin traits may not be the best fit for all swings. As always, hitting it for oneself and looking at the results is the key.

When Cobra initially made its break from the black and gold into bright and flashy colors there were critics that made the argument that color was all that they had to hang their hat on. Last year with the Amp Cell lineup Cobra took that mentality on by producing a head that has gained a tremendous following among golfers both for the flash and the substance behind it. In 2014, they have seemingly sought to take it one step further and lay that mindset to rest once and for all. With the Bio Cell+ driver they have combined innovative materials with innovative ideas based on the desire to produce a club unlike any other they have before. The Bio Cell+ is a major step for Cobra that blurs some of the dividing lines between lower spin and forgiveness. Not only will it catch eyes aesthetically, it will inevitably do the same for many when it comes to performance.