One of the most under the radar releases year in and year out for Cobra are their hybrids, for some reason they remain an afterthought for many. This year, the company is stepping up the versatility by introducing the F7 which also features Baffler Rails, something that should catch the eye of many who demand versatility from their hybrids. THP was able to get the F7 hybrid in the 3-4H model for a look at the technology and performance involved in the new release. 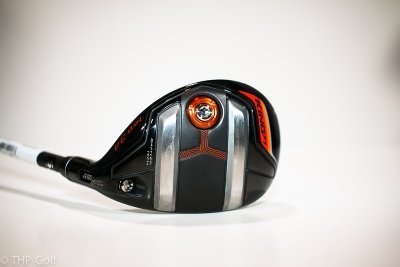 Cobra is evolving their hybrid offering in the 2017 F7 lineup by not only placing heavy emphasis on the back CG weight for launch/flight purposes, but also incorporating Baffler rails with the goal of providing more versatility in a variety of situations. To get a better grasp of these technological changes, it is worth taking a focused look at each of them both in design intention and actual performance results seen during the testing.

Cobra’s main focus with the CG of the F7 hybrid was to place it in a location that would maximize the overall MOI of the design while also aiding the general launch and ball-flight. By moving it back, they should be able to accomplish each of those things but with just the 3-4H in hand it makes it difficult to paint a complete picture of just how the launch is throughout the three different models. However, by putting the 3-4H through its paces on course and monitor, paired with the Fujikura Pro 75H shaft, the ball flight was much more flat than anticipated and the use of the MyFly8 adapter proved crucial to not just the standard fitting of gaps within the user’s bag, but maximizing the ball flight. In all, the F7 hybrid showed to be impressively forgiving while also being workable both ways, but also a lower launcher than anticipated considering the use of the word “towering” in the description.

After the release of the F6 Baffler fairway last year, many of us hoped that we would see the expansion of the rails into future lineups, including hybrids. Well, the F7 Cobra has done just that and the hybrids have “deeper” rails on them compared to the fairways which complete the progressive nature of the Baffler technology through the line. The reason for more depth on the hybrid is because they are typically hit like irons with heavy emphasis on getting down and though the turf on the majority of swings. Performance wise, the F7 hybrid took on all lies that were thrown at it from lush rough all the way to fairway bunkers and the ability to funnel away debris and keep stability through impact shined. However, for this reviewer it became evident that the more aggressive the swing, the better the performance, not just of the rails, but of the head itself as far as flight and distance was concerned. Another aspect of the rails worth mentioning, since the rails stick out beyond the sole, in order to get the MyFly8 adapter to properly maintain the face angle at various lofts, Cobra designed the rails to perform double duty and also serve as the SmartPad, a very cool idea.

The F7 hybrids feature a traditional Cobra footprint/shape and from the top look almost identical to the F6, which isn’t a bad thing. They lack the significantly squared off toe that we are seeing with so many offerings, but they still maintain a decent amount of face depth rather than shallowing out too much. This year there is only one color option, gloss black, and the crown is finished off with some angular graphics at the rear that are far enough at the back of the head that the look stays clean. The sole of the club is where most eyes will wander to and the contrast of the brushed metal on the rails against the black sole and orange accents of the weight and channel give a unique look which will definitely jump out at people sitting in a store display. 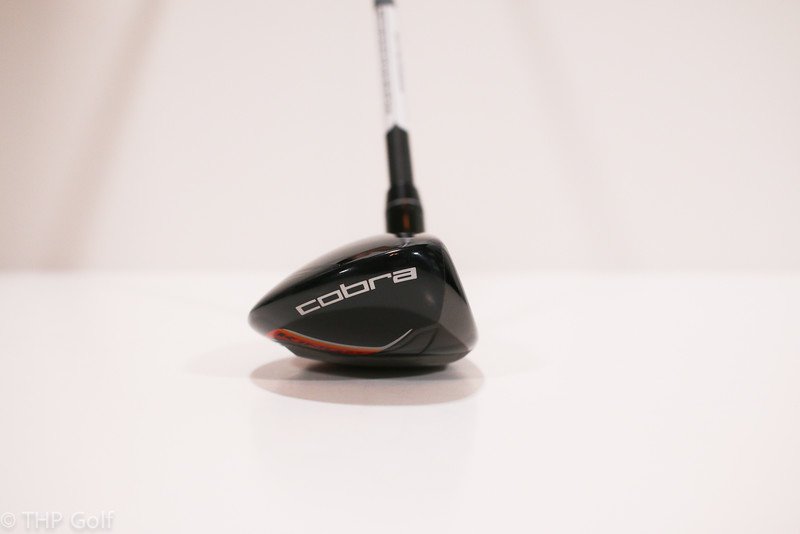 At address, the F7 sets-up neutral and thanks to the rails serving as the SmartPad also means that the neutral look doesn’t change with the loft adjustments.  Additionally, the balance of the design and how the rails helped to funnel debris/turf during testing made it possible to work the hybrid both ways without any over-accentuated draw that so many fear with hybrids. Where the ball flight goes, as mentioned earlier, the club responded best to a more aggressive move when hit off the deck as that lead to a higher overall flight. The head itself showed on monitor to be on the lower spin end of the spectrum compared to other hybrids this reviewer has hit as of late and the typical jumps (low on face) and drops (high on face) were present.

At impact the hybrid has a crisp yet solid overall sound with some metallic tendencies and it’s a very addicting sound. The ball speed generated in the center of the face combined to the lower spin nature provided plenty of distance potential on solid swings. However, for those of use that do not hit the center of the face every swing the F7 hybrid also maintained good ball speeds on misses laterally and as such distances were still solid. For this reviewer, the F7 is not the longest hybrid he has hit in the past year, but fit plays a role there, obviously, and even then it offers ample potential for a variety of swing types/needs. Clearly though, the versatility of the Baffler Rails are going to be what draws many to the F7 and rightly so as the ability of the head to maintain stability in non-ideal lies is something a lot of amateur golfers can get behind in their games.

As exciting as the Baffler technology being implemented into the fairway woods by Cobra was, the fact that we are seeing it also make its way back to their hybrids is flying far too under the radar. If ever there was a club where we have seen time and again (from a lot of OEM’s) that rails increase the overall playability for a variety of skill levels, it has been with the hybrid as it is typically hit more consistently and more aggressively than fairway woods. Though the F7 may not lead in any one performance category, it is an overall performer that will surely garner more attention than we have seen from a Cobra hybrid in some time.

The Cobra F7 hybrids are priced at $199.00, more information on it and the entire F7 line can be found at www.CobraGolf.com.