New equipment lines begin to come out around this time and with each release, THPers are immediately looking for a catch. Something different to grab their attention, and with the new F8 lineup from Cobra they might have found it. The F8 line from Cobra Golf features F8 and F8+ Drivers, Fairways, Hybrids and Irons (Variable and ONE Length), and the entire lineup is equipped with COBRA CONNECT. 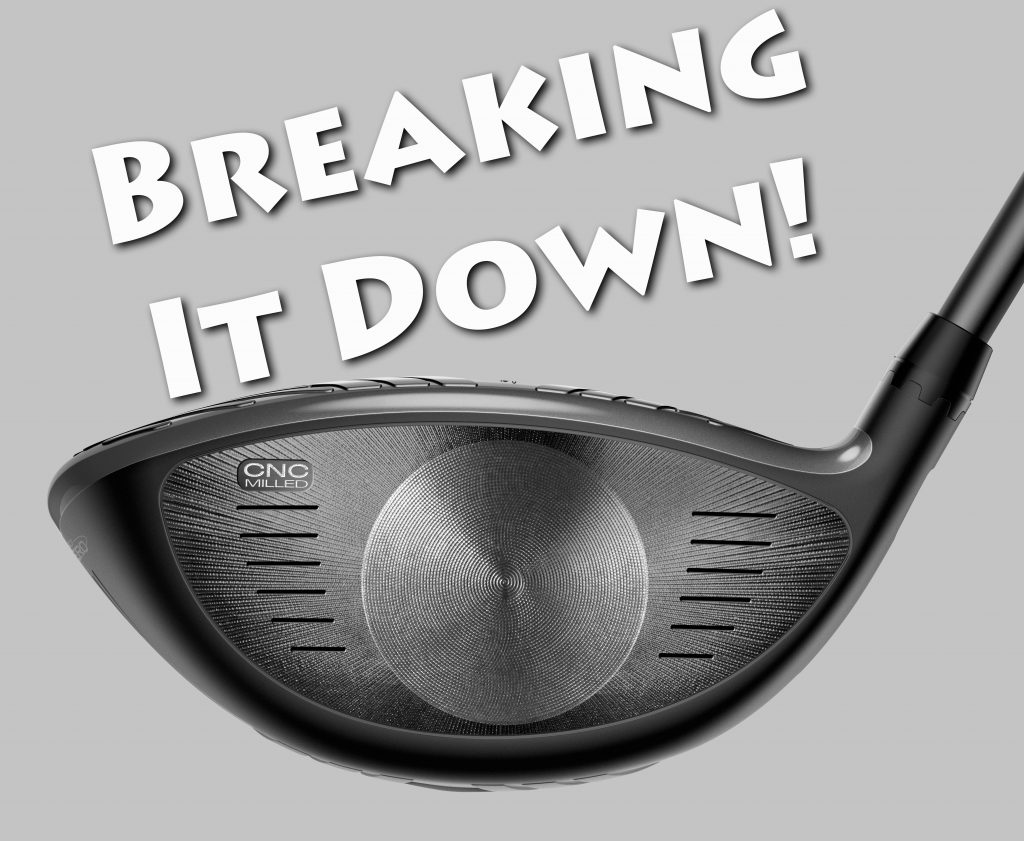 The Drivers
The new lineup brings Cobra’s first fully machined driver face. The CNC milling pattern is multi-directional and is designed to offer a level of precision not found elsewhere. What does this mean for golfers? In theory, it means a thinner face and lighter weight overall for faster ball speeds, along with an improved bulge-and-roll curve.

In both models, Cobra has what they call 360 Aero Technology which uses an innovative system of trips, strategically positioned around the perimeter of the face to reduce drag through the downswing, thus increasing speed of the club. An ultralight, 5-ply Carbon Fiber crown saves weight to reposition it low and deep (back) for higher MOI and increased forgiveness. The body is made up of 8-1-1 Titanium and the forged face spares further weight, while the brands E9 Face Technology creates more hot spots farther away from the center. What does that do for you? It should give you more distance and straighter shots as you miss laterally towards the heel or toe side of the clubhead.

There are two models here to consider, the F8 and the F8+, and both feature the COBRA CONNECT powered by Arccos. If you missed this from their previous lineup, here is a quick look at it with Mike Yagley on THP TV. Keep in mind, he is speaking of the previous drivers, which had this in the grip, but not throughout the entire bag.

The KING F8 driver has two adjustable weight settings for a center of gravity change. This will impact ball flight higher and lower as well as the spin profile a golfer will find. You will still find the loft adjustment system, this time called MyFly8 with Smart Pad, which will allow players to adjust to 8 different loft settings, as well as bring in some draw bias to help square the clubhead. 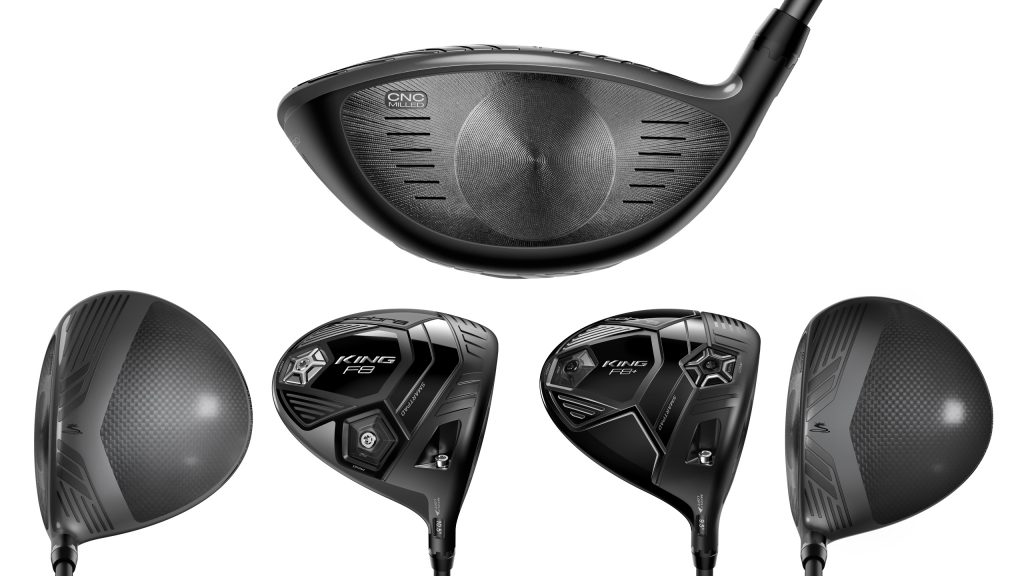 The KING F8+ model is a more traditional shape and offers a lower loft range starting at 8 degrees. You will find the same advanced technology features found in the F8, but can expect a lower ball flight overall with the driver.

Both of the models are available in black or grey.

The Irons
The new KING F8 irons feature the COBRA CONNECT system powered by Arccos, a first of its kind in the iron category.

“Our 2018 iron offering is truly ground-breaking, as it provides not only innovative technologies to achieve better performance across the board, but also the wherewithal to actually quantify just how much better, thanks to COBRA CONNECT,” said Tom Olsavsky, Head of R&D for COBRA Golf. “Our F8 line offers an innovative solution for both the players who trust their games to variable length irons and also for the growing contingent of golfers who have realized the benefits of our ONE length set up.” 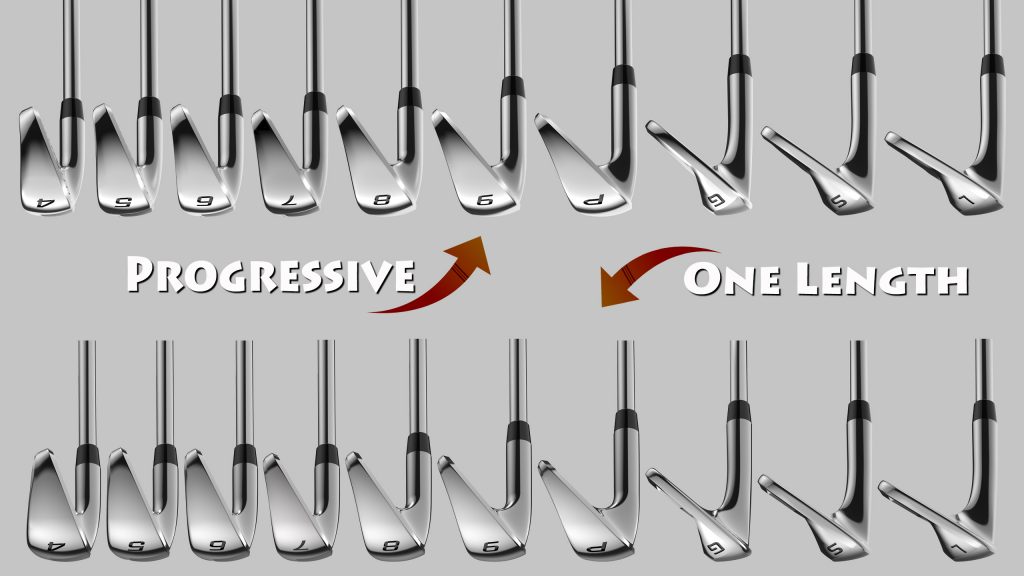 There are two models headlining the 2018 lineup, the KING F8 and the KING F8 ONE Length Irons. Both pack a lot of technology into them, so let’s run through each piece and how it might impact the golfer. Both sets feature the new E9 PWRSHELL Face Technology which is 20% thinner. More importantly, the Sweet Zone construction is designed to promote faster ball speeds laterally across the face for both distance and forgiveness. Carbon Feel Technology inserts are positioned throughout, and they are designed to offer a softer feel, while still maintaining an explosive crack at impact.

The Progressive set (standard lengths), features a full hollow body design in the long irons and mid irons, which will move the center of gravity deeper and reduce spin, offering more distance overall. Once you get to the scoring irons (8-PW), a cavity back design delivers more precision and a slight uptick in spin for better holding on your approach shots. An interesting element discussed with R&D yesterday was the progressive hosel lengths throughout the set. Shorter in the longer irons, which will lower the CG for higher launch and more forgiveness, and taller in the scoring irons, which will position the weight higher and more forward in the clubhead for a different trajectory and accuracy into the greens. 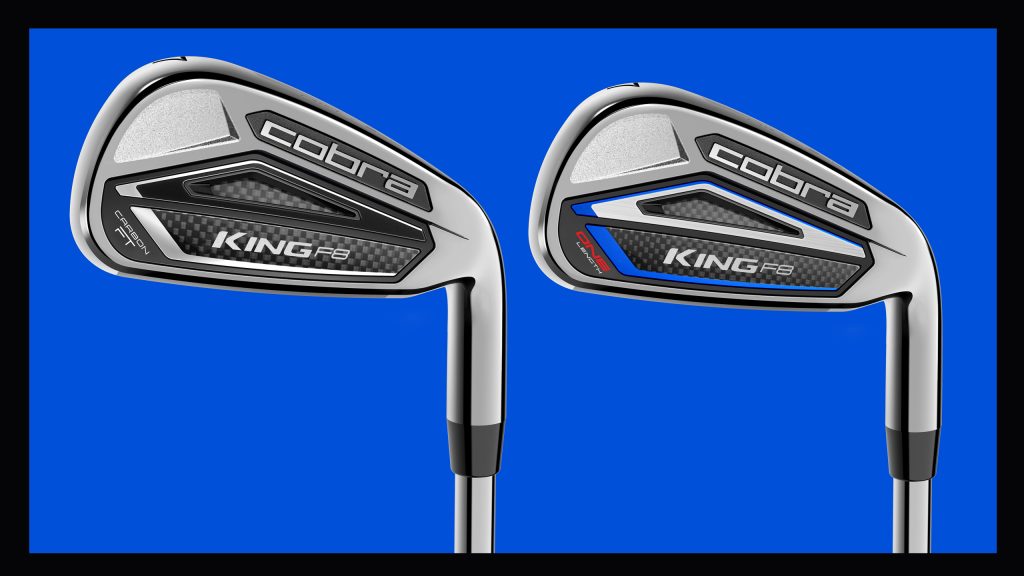 Building upon their very popular ONE length set of irons, the company used TECFLO construction in the F8 ONE, which allowed more weight movement around the head. Looking back at the F7 ONE Length, the one area we felt as though it could have been improved was trajectory in a few of the irons. Happy to report that was improved, and dramatically so. Like the standard set above, the use of progressive hosel lengths play a large role here.  This is paired with wider sole widths in the 4-6 irons to lower the CG in the long irons for higher-flying trajectories, and raise the CG in the scoring irons and wedges to promote lower, more controlled trajectories.

“Overall, I’d say the F7 ONE Length was a great surprise for us this year, surpassing all sales forecasts we had at the outset, and Bryson DeChambeau’s impressive win at the John Deere Classic this summer certainly helped generate even more interest,” said Olsavsky. “Now, as more players take note of the benefits provided by a ONE length set, we are excited to deliver the F8 line-up, with cutting-edge iron technologies that work in unison with the one length philosophy to make them even easier to hit and more consistent than before. And even better, with COBRA CONNECT, golfers don’t have to just take our word for it. They can clearly see just how much they’ve improved based on real data points. The numbers don’t lie.”

Complementing the irons, COBRA is introducing the first ONE LENGTH Hybrid. The KING F8 ONE LENGTH Hybrid features revised weighting and CG, an upright lie angle, and increased head weight to match the ONE Length irons. 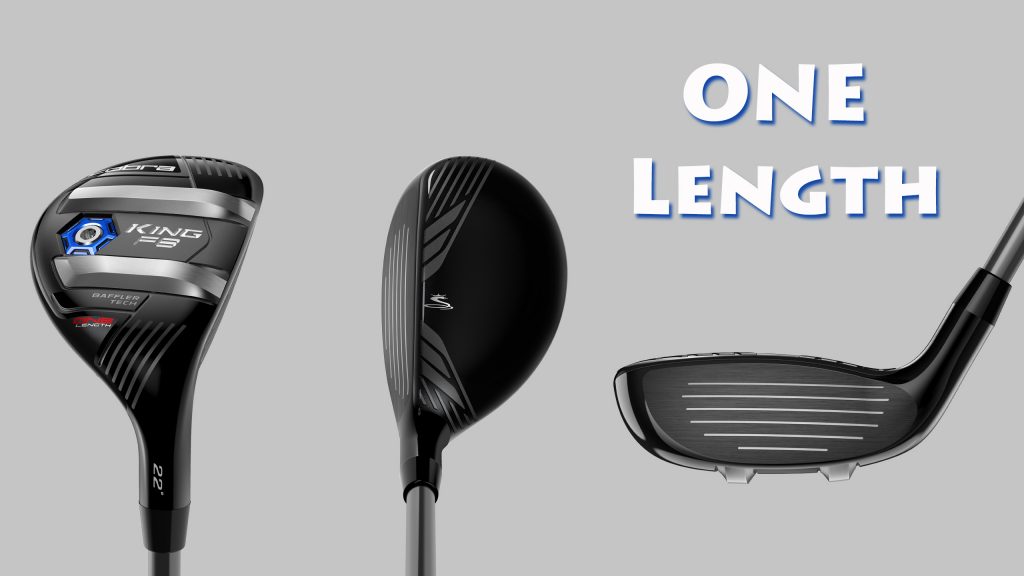 Hybrids and Fairway Woods
The Baffler Dual Rail System continues on the new KING F8 fairway woods. The new lineup features a tighter spaced design of the rails, with the center of gravity falling between the two “ski like” rails. What this results in is a higher amount of retained speed of the clubhead when you make impact with the grass, regardless of conditions. They feature different heights based on the club loft which will continue to provide better turf interaction regardless of swing type. Therefore, regardless of swing type (steep or shallow angle of attack), the club will work as designed.

The above mentioned 360 Aero Technology trips, are positioned around the perimeter of the face and are designed to work the same way here as they did on the drivers we spoke about earlier. Keeping up with the speed conversation, for the first time Cobra has gone with the ultralight 5-ply Carbon Fiber crown in their fairway woods. Speaking with Mike Yagley earlier this year about weight, you can see in the video below he explained why there was a movement towards composite materials.

While this is about driver crowns, the same school of thought exists

Moving towards the KING F8+ fairway woods, you will see all of the same technology packed into the club, but in a more compact size that is desired by some golfers. Additionally, the F8+ features a CG placement that is front positioned leading to a lower ball flight and a reduction of spin. 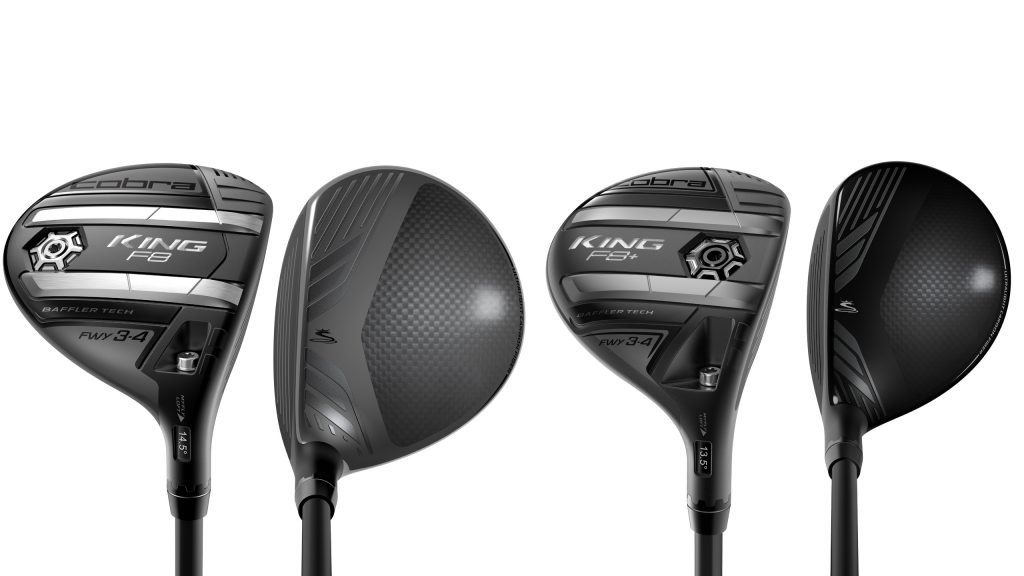 Like the F8 fairways, the taller and tighter-spaced rails on the F8 and F8 ONE hybrids provide more leading edge bounce, to help the club stay lower to the ground for more consistent launch from a variety of lies. The clubs feature the same Aero trips mentioned earlier, and are designed for more speed. A sleeker clubhead design overall features a shorter and skinnier hosel for an extremely low center of gravity. Combine that with a fixed weight positioned low and back and the club provides a high ball flight with relatively low spin.

Previously mentioned as being the first of its kind, F8 ONE LENGTH hybrid falls right in line with the ONE Length iron set for the ultimate in consistency.

Here is a photo gallery to scroll through providing tons of pictures from Cobra Golf on the different products discussed above. As always, there are THP Forum threads on each piece of equipment mentioned here as of right now. In hand pictures will be in there over the next few days as well as feedback from THPers that have already had a chance to test the products Jump on over to the THP Forum here.