If you have paid attention to Cobra drivers over the last few product releases, you will notice a steady trend of improvement in both the technology applied to the product, and the way it works in tandem with the swing rather than against it.  These changes may have seemed a bit subtle cosmetically, but F9 represents a significant change in the overall profile of the head, both at address and as the eyes wander around the head.  It is time to take a closer look at what golfers can expect with the F9 driver for the 2019 golf season.

Out of the box, the driver is unmistakably Cobra, mostly because of their unique CNC milled face.  You also get a similar feel as you look down at the top line, with the groove patterns and Snake logo.  Taking a deeper look, I could not help but focus on the “Speedback” as I assumed it was called, with the weight absolutely hammered down near the ground at the central point of the back sole region.  Finally, while the yellow color really popped, I could not help but stare at the carbon fiber crown that rolled around the edge and down the side of the head.  It is not something I am used to seeing.  What I am really excited about, is the decision to offer two color options to consumers.  The yellow, black, and red profile which is pictured throughout this review, and a more subtle black head with matte crown and white highlights. 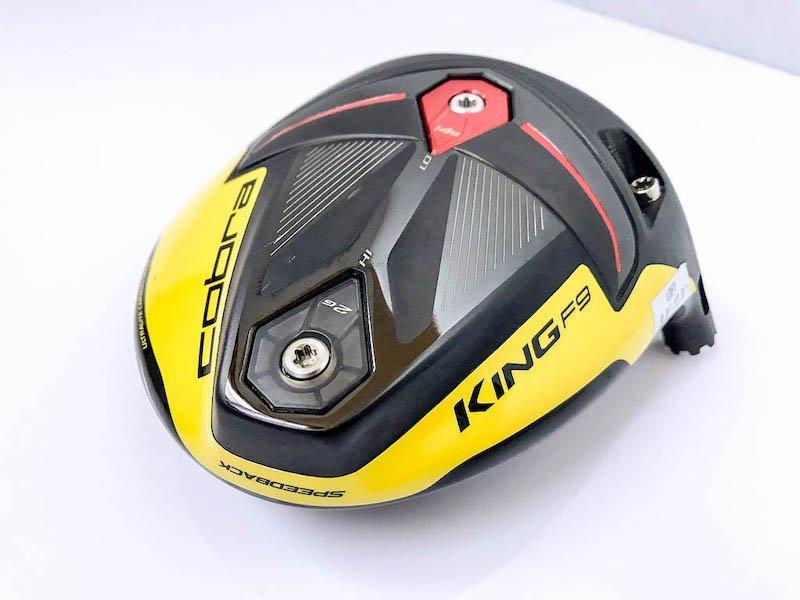 The reality is, there is a lot to uncover about this driver, and the various components that make it a huge improvement over the F8 or previous models.  First, we should probably talk about the carbon fiber crown, which is rolled around the top edges of the crown into the body of the head.  This design most certainly allows them to free up weight for optimal placement, driving the CG down towards the base of the head.  Cobra is calling it a “Carbon Wrap Crown” which adds an additional 12% of carbon to the crown area, saving around 10 grams of weight.  They have introduced two stabilizing bars that run from face to back along the crown, surely strengthening the material to promote the lightest possible crown while maintaining durability.

During a meeting with Cobra, I had the opportunity to better understand how the head shape plays a significant role in the wind drag throughout the swing.  Included in the presentation were some impressive graphics showing just how much F9 has helped the golfer get the head through the swing, promoted by softer leading edges on the top and bottom of the face, a crown that is more rounded, and a raised skirt in the back of the crown area.  They also talked about more appropriately placing the raised elements on the crown, which not only support the head in this process, but also frame the ball well at address. 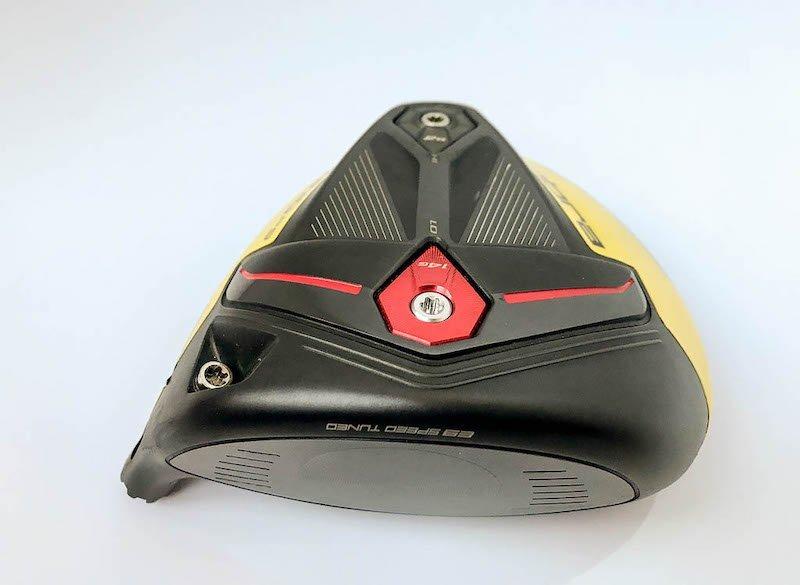 One of the most compelling visual elements on the F9 driver head has to be the extremely low back weight placement.  Golfers can decide whether to throw the heavy weight forward for the lowest launch and spin profile possible, or send it to the back of the head, yet maintain some of that low CG based on the location of the port.  With a difference of twelve grams between the two placements, there seems to be a decent impact on the results, and testing proved that most golfers will appeal to the heavy weight in the back location.  This is a bit of a step away from F8 for Cobra, where they had a weight in the back as well as down towards the heel for a draw setting.

During the testing period, the conversation on sound became one of the main talking points.  Squared swings sound very different from glancing blows (think open face fades).  Trying to really nail down the sound, the comparison between a metal baseball bat and a wooden baseball bat was used, where the F9 sounded closer to the ‘crack’ of a wooden bat when struck well.  It is not muted, yet is not heavily driven by metallic tones in the strike.  Hitting it personally, I quite enjoyed the sound of good contact, and could hear a distinct difference when one of my regular playing partners moved back and forth between his glancing fade strike, and a squared contact.  We had originally attributed it to swing speed, where the faster swing speed more consistently produced the best strike sound, but later decided that quality of contact played a greater role on sound quality. 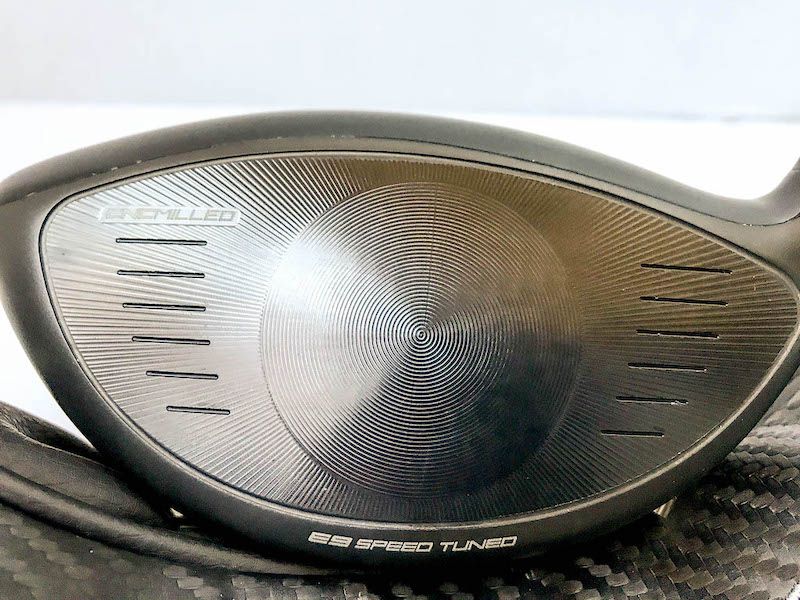 The dispersion throughout testing was mixed.  I spent quite a bit of time towards the toe and certainly on the outer milled circle of the face, maintaining a fairly straight ball flight with the predictable face draw coming into play sporadically.  In talking with one of my regular playing partners, he recollected not missing as dramatically to the right when his swing was not perfect, and enjoying some mid to high ball flight with great launch when striking the ball well.  Overall, I think it is fair to put the F9 in the mid launch category, with some golfers having better success launching the head (even at 12 degrees) with the stock Atmos setup.  I personally moved a more suitable shaft into the head and found some low launching and penetrating flight, with not a lot of left to right movement.  It does not seem like a head that is actively promoting high launch, but rather more penetrating launch for my game.

One of the most interesting design aspects of the F9 driver is the lack of a ‘tour’ or ‘+’ model.  Unlike previous years, they are offering the F9 in three lofts, which act slightly different on the face.  The lower lofted option is going to play and promote spin more like the “+” model, whereas the higher lofted heads are going to promote launch and spin more aligned with the needs of golfers in that loft profile.  It is a very interesting concept to eliminate some of the confusion, but I do wonder if it provides enough of a variety between the head design to promote exactly what a high spin vs low spin player needs. 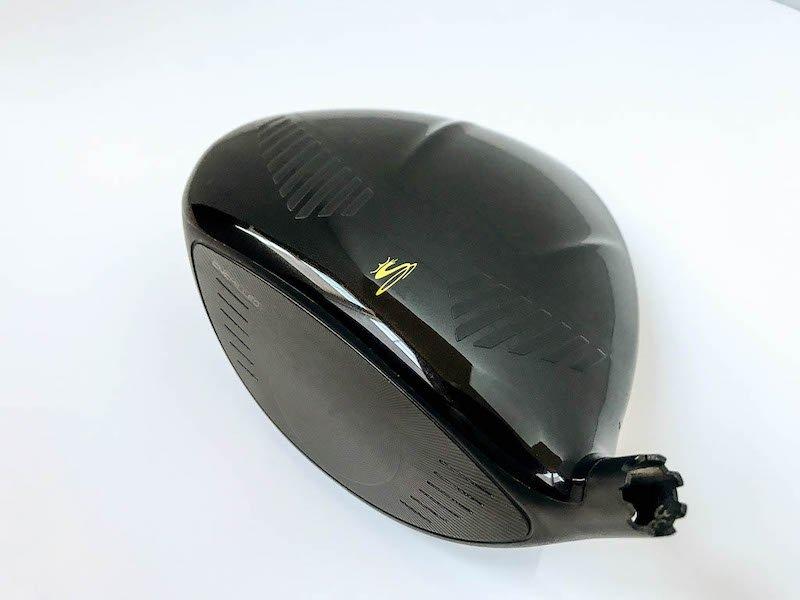 Looking back at the testing phase of this review, it became quite apparent that golfers are going to enjoy what F9 has to offer, especially those in the middle of the spin and launch spectrum.  The sound is a fantastic compliment to the Cobra lineup, and unique enough to stand out from other heads available on the market.  The technology is ever improving out of Cobra, and they are doing it in a way that seems to test the boundaries of drag and flight characteristics during the golf swing, which makes for really interesting discussions.  This is especially true when looking at all they did to produce the current carbon crown.  It is nothing short of impressive.  For more on the Cobra F9 driver, visit www.cobragolf.com.