With putters, other than the advent of specific things like inserts and high-MOI principles, very little has changed as it pertains to the actual balance and design of the club itself. Traditionally, the balance of the putter lends itself most to a certain type of stroke, but with the Torque-Balance design, Edel Golf is trying to show that one extremely different take on balance can fit all. 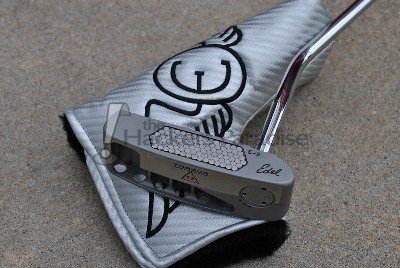 Every club we produce combines the highest quality materials with a blend of old world craftsmanship and leading edge technology. Our clubs are played on all major tours and are endorsed by top 100 instructors world-wide. If you are serious about shooting lower scores, put our product in your bag and take a lesson from a professional that can show you how to maximize its performance.

Our golf clubs can be built to you exact specifications and customized to reflect your unique personality. Edel’s craftsmanship is truly 1/1; we stand behind our products and firmly believe that you can’t mass produce integrity.

For this review THP spent time with the E-2 version of the Torque Balanced line at standard 34” length and standard loft and lie.

The word different is one of the first things that comes to mind when looking at the Torque Balanced series from Edel. Aesthetically speaking, it is a radical departure from that which we commonly see in terms of head shapes and build. These are unique designs, which much credit should be given for, but because of that there is an acclimation period that will be necessary for many. 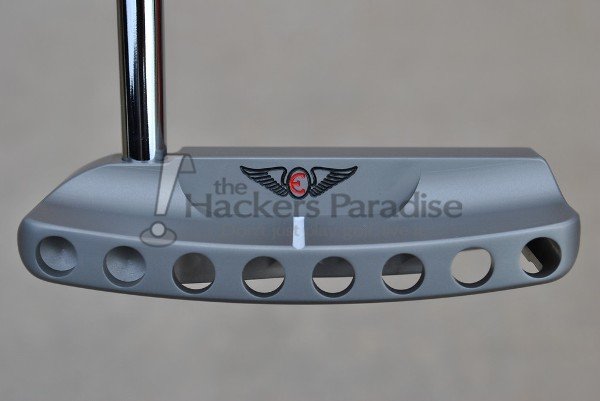 The address view of the E-2 is an example of the putters uniqueness, but also simplicity. It is a blade design with a slight radius on the rear flange, which gives the overall look a nice flow as it pertains to lines when setup behind a ball. The topline is average in its thickness, which helps to prevent any feeling of being cumbersome, despite how different the actual design is. The flange portion of the putter features only a very small beveled bumper and no cavity cutout, but the reason for that is evident when you flip the putter over. 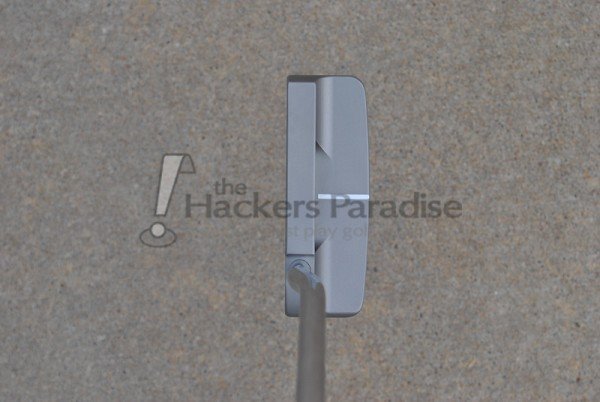 From the sole of the putter all thoughts and expectations are literally turned upside down. In order to achieve the toe-up balance which will be talked about later, Edel has removed a massive amount of material from the sole of the putter, leaving behind a cavity that elongates and becomes wider towards the toe. Additionally, there are eight holes drilled out of the rear bumper to move even more weight in the head and also provide a nice/unique look from behind. The cavity itself is pretty wild to look at, and though there were initial concerns of the edges causing excess drag on the green when the putter is soled to start the stroke, no such instances occurred in testing. 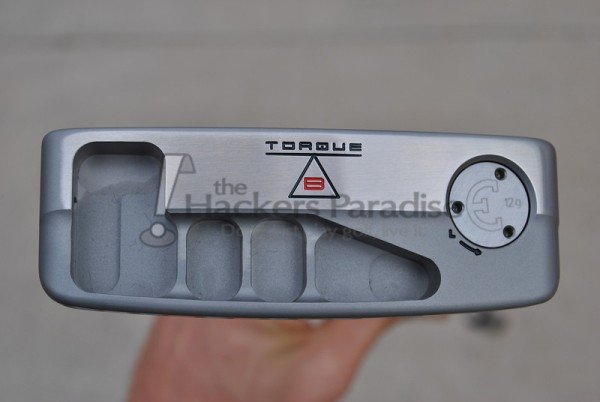 The entire putter is finished with a satin chrome that prevents glare and also brings the design together quite well, more-so than a darker finish would have in this instance. Engraving is minimal and kept simple in both design and paint fill, which allows the eyes to focus on the rest of the design, particularly the PIXL face. Although the Torque Balance concept is the main design focus here, the PIXL face steals the show aesthetically as it typically does in the Edel putters that feature it. The 93 individual PIXL’s arguably give the putter the most unique and technical insert look available today.

Although the PIXL insert is not necessarily the key feature in the Torque Balanced putters, it has for some time been a considered game changing technology in the eyes of Edel and bears further attention. The insert is made up of 93 PIXL’s that are individually placed into each face with the purpose of preventing energy loss at impact. The PIXL’s serve to absorb and re-focus the vibrations (energy) back into the ball, as only the individual PIXL’s that are contacted transfer the energy rather than the whole head as in a typical milled putter. 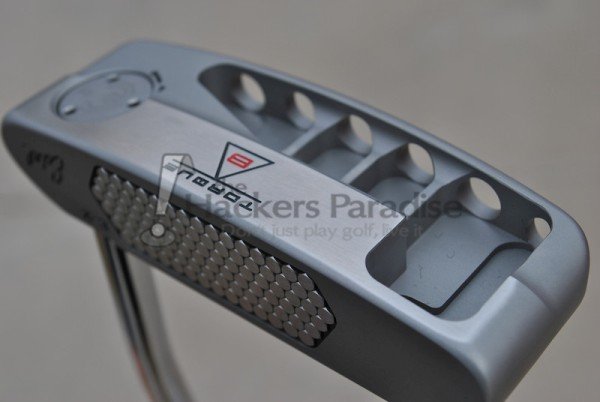 What this lead to on the course was impressive overall dispersion in both direction and distance to the hole on putts across the entire insert. The pace was consistent no matter where impact was made. Although it clearly will not make up for a mis-read, it is always nice to know the distance to the hole will at least be there. The sound off of the PIXL’s is a plush, deeper click that provides all of the audible feedback most will look for in a high-end putter design. It does bear mentioning that the sound on putts heel to toe on the insert is not all that different in tone than center strikes, something that golfer who are huge on audible feedback may be interested to know. 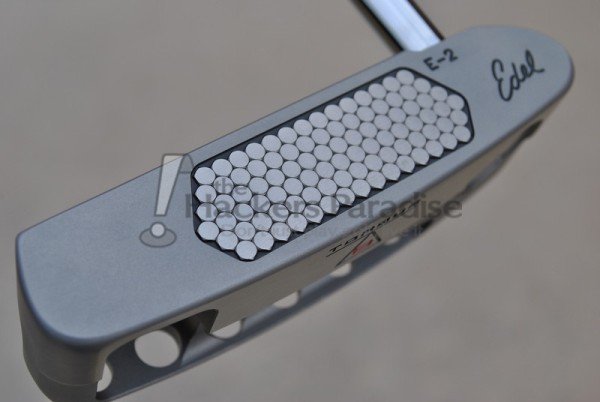 The “Toe-Up” balance principle is the true unique technology within the design of the E-2 and the entire Torque Balance lineup from Edel. Most putters are either face balanced or possess variable amounts of toe-hang (toe down) in order to aid and work with the natural arc of the stroke. Traditionally, it is believed that as strokes vary so too does the toe-hang that will best suit the individual golfer. With the Toe-Up principle, Edel  is flipping that on its head by removing a significant amount of weight and repositioning it (variable weights in the heel) as well as using a double-bend backstep shaft (not offset) in order to eliminate all toe-hang. The idea is that by being Toe-Up in its balance it will be more resistant to twisting throughout the stroke and instead allow the users stroke alone to dictate the gate of the putter rather than the toe-hang. 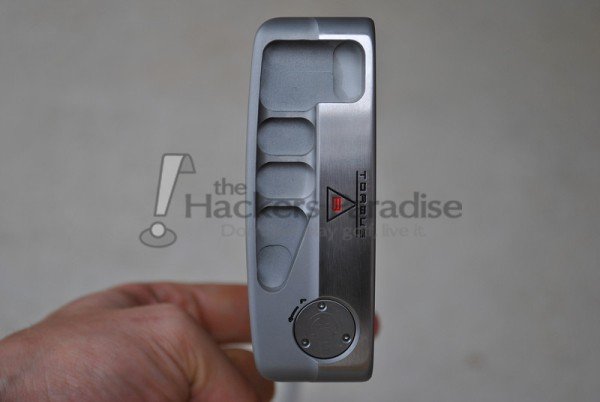 In testing with golfers possessing a variety of different strokes (minimal arc to full arc) what was found is that the balance of the putter really did seem to allow the face to close at address, regardless of the difference in each of the user’s strokes. The face closes consistently and this really negated the cut miss to the right which many golfers suffer from because of an open face. Initially the elimination of the right meant more of a tendency to pull putts, but after some acclimation time the consistency of the squaring of the face at impact paid dividends to maintaining the chosen line. 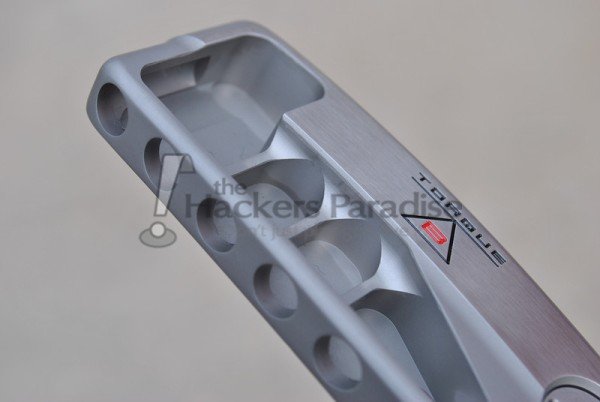 Additionally, though not included for this review, Edel is offering three different heel weights to provide a feel that will fit a variety of golfer’s preferences. Most will look at the pictures of the E-2 and immediately think that it will be very light, but with the stock 12g weight it comes in at 365g which is in the wheelhouse of a large portion of golfers. The balance throughout the stroke is quite good, but the double bend backstep shaft will take some time to get used to for most, as the putter almost appears to have onset rather than offset and is obviously the opposite of what we see elsewhere. 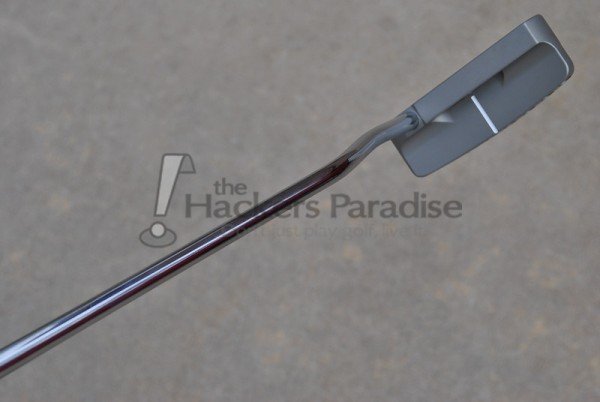 From both an aesthetic and design standpoint, the E-2 putter showcases both creativity and willingness to try different things. The overall performance based around this creativity however will inevitably be judged by how well the user acclimates to Edel’s take on putter balance with the toe-up Torque Balanced design. What is certain is that review time spent with the E-2 shows that it is a putter in which the face squares at impact consistently, just as the design predicates it should. All around, the E-2 is a solid offering within the crowded putter market which differentiates itself by having a unique story among all of the “normal” options out there.

The E-2 Torque Balance has a price of $299.00 and more information on the entire lineup of putters can be found at www.edelgolf.com.