Do you ever wonder why there are so many putting aids on the market as compared to swing aids? Putting is such a personal and individual portion of one’s golf game. Due to that, there has to be a multitude of devices and aids out there to accommodate everyone’s personal taste. Eyeline Golf has a number of different training aids and the latest one they sent for a THP review is the Edge Putting Mirror. I’ve had some success in reviewing other putting aids from Eyeline Golf and this one certainly has caught my…ahem…eye right away. Mirror, mirror on the ground, is my putting stroke sound? Check it out. 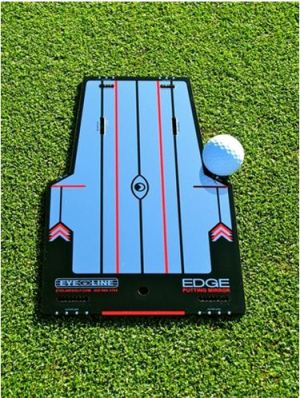 Did You Know?
The Edge Putting Mirror is the most used mirror on Professional Tours worldwide?

Look
The look of the Edge Putting Mirror is, well, very mirror-like. A mirror with a number of alignment aids anyway. It’s not an overly large or bulky training aid and its functionality is basic and simple. It allows you to see where your eyes, putter face, and shoulders are lined up in relation to the ball by using the different alignment lines on the mirror.

Testing
I was able to test the Edge Putting Mirror both indoors and outdoors. Due to the non-skid backing, I didn’t notice any sliding, whether it was on the floor or on the putting green. For added stability you can use tees in the appropriate holes in the mirror. This can also serve as a gate with which you can see if your putter, ball, and release are in line and on line with your target. I’ll touch more on that aspect later, but first I want to focus on the main purpose of the technology behind this training aid.

The mirror allows you to see where your eyes, putter face, and shoulders are in relation to the ball at set up. The idea is to see, and ultimately correct, a flaw in your setup so it doesn’t translate into your stroke. If you’re set up wrong to start, how can you expect to roll the ball on the target line to the cup? I’ve spent a lot of time working on my putting stroke this year and always thought I had a solid set up. When I first started testing the Edge Putting Mirror I immediately noticed that my stance was slightly forward of the ball and that my head was a little too much over top of the ball. It was almost like I was forward pressing with my body, which I never would have realized without it. I was standing a little too much over the ball, which resulted in me hitting down on it. This caused the ball to jump up and off the face instead of rolling smoothly. After using the Mirror and setting my head a bit behind the ball I noticed myself putting the ball with a subtle upstroke that got it rolling sooner with a truer roll, thus eliminating the small hop at impact. 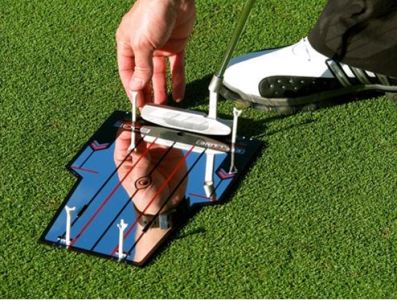 After getting used to this new stroke of mine, I decided to see what else may be wrong with it. I used the previously mentioned ‘gates’ that are supposed to assist in seeing if the putter, ball, and release are all in sync. I noticed right away that my putter went back and through its gate just fine, as did the ball. However, I quickly noticed issues at my release. I noticed that either I wasn’t fully releasing the putter by clipping the tees at the front ‘gate’, or if I was, I’d be clipping just the inside tee, suggesting I was pulling through my release instead of letting it go straight through. With a little more practice and by concentrating on using the alignment aids to help guide my putter all the way down the line, I was able to really let my putter go down-and-through properly. This resulted in more solid stroke that was online with a nice, true roll.

One other thing I observed was that the alignment aids really helped show me where I was aiming. There were times when I thought I was perfectly lined up to my target and after executing a perfect stroke I realized I wasn’t. Now I don’t envision a single line stretching from my putter’s alignment aid when I’m aiming at the hole. Instead, I envision an alignment aid that stretches from the toe, heel, and center of the club. This helps ensure that the putter is squarely aligned with the target and keeps me focused on a solid, squared release of the putter face. 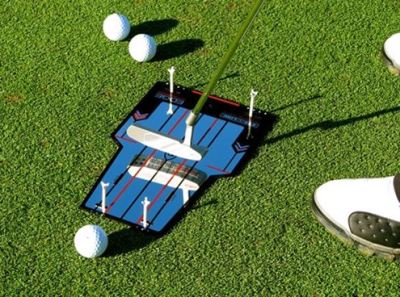 Overall
The Eyeline Golf Edge Putting Mirror retails for $59.95 and you can find more information about it at www.eyelinegolf.com. It’s sturdy and simple to use. Unfortunately, its shape, and the fact that it is a mirror, don’t allow for extreme portability, so I’m not sure I’d recommend that you keep it in your golf bag. However, it is something that can be used anywhere you like. Once you get used to looking at yourself in the mirror it’s a really effective training aid that will quickly show you where you’re aiming and where your stance is in relation to where the ‘ideal set up’ should be. Putting is personal and the ‘ideal’ stroke may not be what you need, but the Edge Putting Mirror should show you if your setup and stroke is the fairest of them all.