Rather than simply guessing on the range as so many do, most golfers would benefit greatly from the ability to physically see their swing to help them better understand what is going on. The main hindrance that often keeps people from recording their swings traditionally has been the inconvenience of having to focus on being a cameraman and a golfer simultaneously if they don’t have someone there to assist. FedbacK Collect is aiming to remedy this by joining in on the booming golf app market and utilizing the convenience of smart phones and hands-free voice commands to make obtaining visual swing FeedbacK much easier. 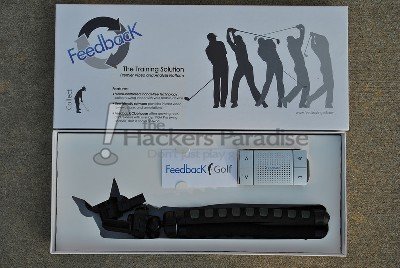 FeedbacK Golf is a completely hands-free training solution that does not require hardware or sensors to be attached to your golf clubs or gloves. Without extra hardware, you have a more authentic golf learning experience.

Included in the FeedbacK Golf is a flexible tripod, as the company knows that for the best performance users need to have their mobile devices at the proper angles of the golf swing. The tripod is good quality and features an adjustable mount that will fit most devices and flexible/bendable legs that let it set up pretty much anywhere to achieve the best angle. Additionally, it fits easily into the side pocket of a golf bag, making it easy to have it on hand for any range session. 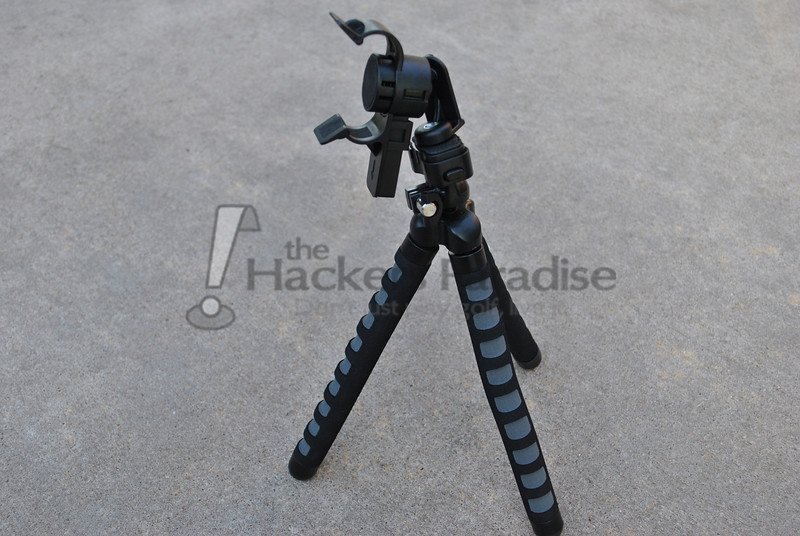 Through the combination of the FeedbacK app and Bluetooth voice control box, full video capture is possible using the front or rear camera on the mobile device. Additionally, the control box can be worn on a belt and allows hands-free operation of the capture process while on the range. All captured videos can be viewed immediately on the mobile device including full categorization, comparison, and markup capabilities. Furthermore the capture is set up to work from multiple angles as well as both dexterities. 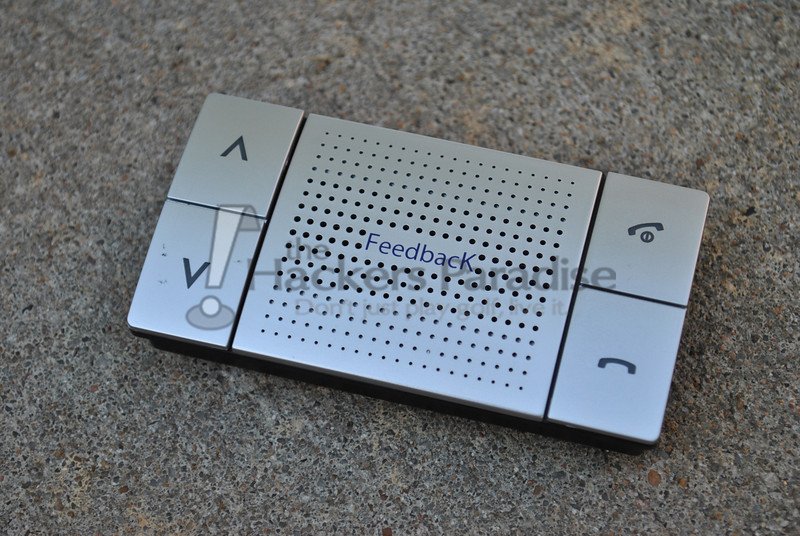 The true comprehensive feature of FeedbacK comes with what they refer to as the “FeedbacK Clubhouse”. Essentially, this is where full storage and cataloging of range sessions takes place, either directly on the user’s mobile device or by uploading to the website. The Clubhouse is always accessible and features tools for comparing and marking up each swing with a variety of drawing tools as well as recording voice memos. 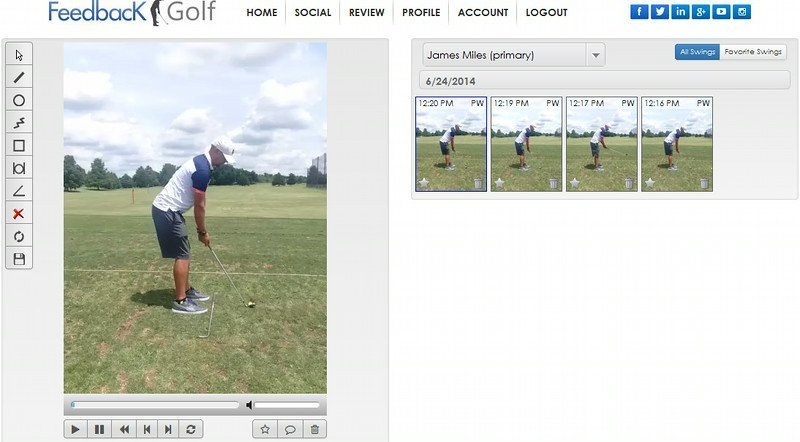 The Clubhouse is accessible for anyone who downloads the free app, but access is limited to 20 swing uploads to the website. Those who purchase the FeedbacK kit however get a code for one-year of full access and unlimited uploads with renewal coming at $19.99 each year after. After uploading to the Clubhouse the user is able to share their swings via different social media options or by sending them to their instructor.

For this review THP was sent the full FeedbacK Collect golf bundle and the device was much simpler to use than anticipated. Setup involves downloading the iOS app (Android is in development) and upon opening the app the user is prompted to create an account after which other settings can be adjusted. Standard settings within the app have swing recording set to five second clips, but this can be adjusted anywhere from three to seven seconds depending on the user. Additionally, FeedbacK allows for weather and location features to be turned on and will attach this information to each recorded swing, allowing the user to see all of this when reviewing the swings later. 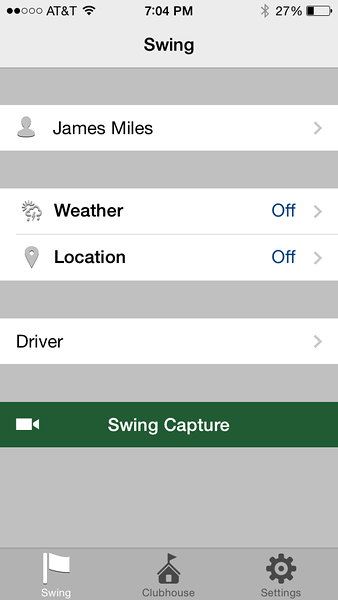 Actual use of FeedbacK is straightforward thanks to the simple interface of the app. After utilizing the flex tripod (any mounting device really) and placing the mobile device at recommended distance to the swing you simply open the app, select the club being used, and tap “swing capture”. From here you are taken to the live camera view and alignment guides which appear on the screen to make sure everything will fit in frame. The base overlay is a dotted line down the middle and a circle on either side (depending on if LH or RH is selected) where the ball should be located for a proper capture. Additionally there is a circle only overlay which can be used for face on. 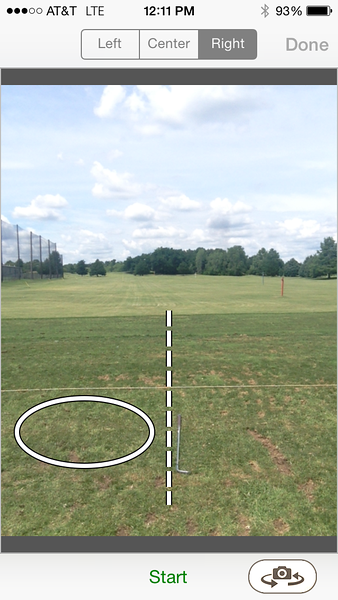 After alignment, tapping “start” will initiate the recording process. With FeedbacK this is where the Bluetooth control box comes in to play. After syncing to your phone it is worn on your belt via the magnetic clip. The app will give voice commands that it is active and to “say ready to record video”. From there, while set up over the ball, saying “ready” will initiate the recording process with a single long beep to start your swing, after the swing there are then two short beeps to specify that recording is complete. The swing can be viewed immediately on the device or the user can simply continue practicing and recording by saying “ready” each time. 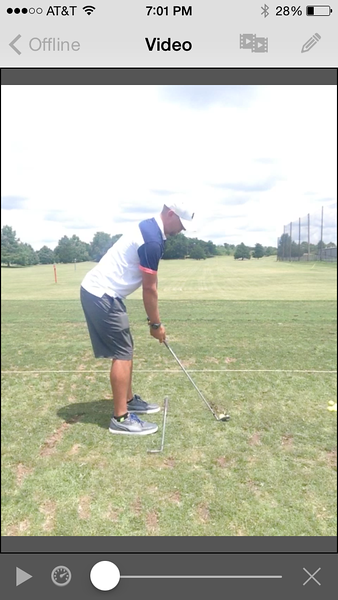 Being easy to use is critical when it comes to apps and technology, but the performance is equally as important. The FeedbacK Collect setup intends to make recording one’s own swing streamlined and easy by simplifying the parts within the process and making it as easy to understand as possible. From there, the individual has a plethora of possibilities in their hands with how they utilize the swings they capture. 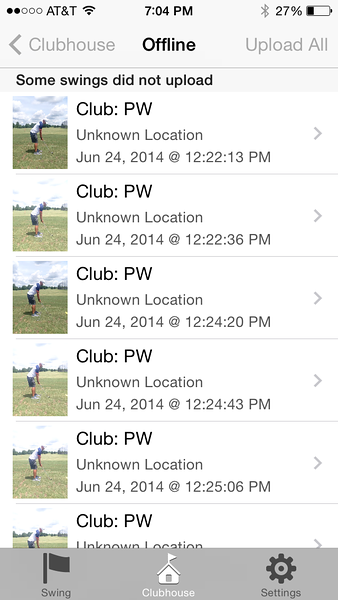 The voice capability is without a doubt the centerpiece of the FeedbacK setup and naturally it will be what draws the most concern for many as well. The voice module included in the package syncs easily via the Bluetooth on the phone and during testing the pairing was never dropped while in use. Thanks to the echo cancelling within the module it does recognize the “ready” command well, but the general environment can pose some situations which must be recognized by the user. For instance, on a windy day commands must be said more loudly and towards the module. While not a major issue, if one is on a crowded range the FeedbacK setup could create some hesitancy of bothering others for the user, as the app does use audible commands and sounds during recording. This did not bother this reviewer, but the timid may prefer to use it on a less crowded or secluded area. Fortunately you can use the FeedbacK Collect app to record your swing anywhere (not just the range), so there are plenty of options to make the experience the most comfortable for the user and those around as well. Either way, even with the small hiccups that can occur with the voice control, the actual videos once the app activates were flawless as far as the capture is concerned. 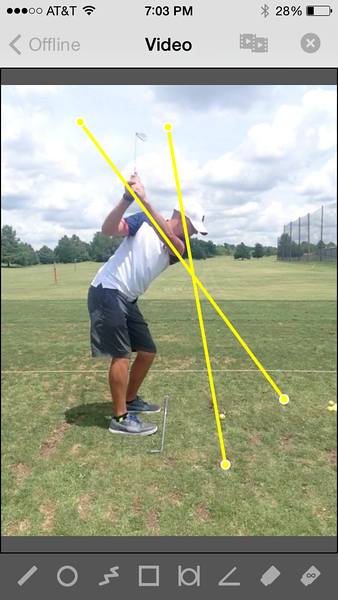 The data recorded via the app possesses a staggering amount of detail and options to view both on the phone and by uploading to the clubhouse. Each swing is categorized by date and club being used and with simple swipes can be uploaded, edited, or deleted entirely. Additionally, if the weather setting is turned on the device will fetch and attach to the swings the location, temperature, wind speed, wind direction, and even the humidity. This worked flawlessly during review, but it is worth noting that although you do not need access to Wi-Fi or a data network to record swings and store them on the phone, you must have access to one of these in order to upload them to the clubhouse or to attach all of the optional weather information. The nice thing is that uploads are easy on the data since the default settings for the swings are 5-second clips. 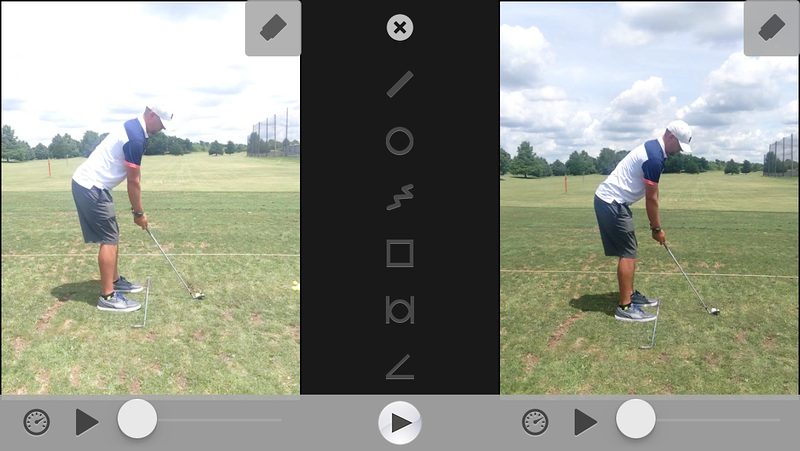 The company has also provided full slow motion viewing and “markup” capabilities in the app and on the clubhouse where each swing can be broken down with various visual tools to further analyze the different parts. As the swings are marked up you have the capability to save these swings with full illustrations to come back to or even to use the side by side feature to compare them with newer or older ones. You can even record voice memos that attach to each swing as reminders of what you are looking at. All of the different tools are easy to use and understand which lead to tons of possibilities as far as educating oneself on their golf swing. Understandably however, the company acknowledges that FeedbacK is not intended to replace lessons, but instead as a way to see your swing and practice as a compliment to face to face lessons. 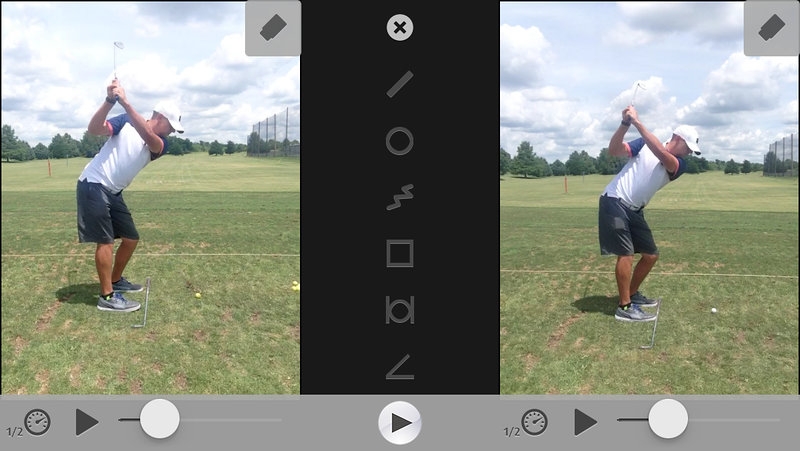 It should be noted that when swings are uploaded to the clubhouse the quality of the video will be dependent on the camera quality of the device and typically the best will come from the rear camera and not the front one. Swings taken with the front camera did experience some pixilation during playback on the clubhouse website.

It has been said many times, but technology continues to affect everything in our lives from the day to day and even into out hobbies or passions like golf. The FeedbacK Collect aims to make recording the golf swing easier and it does just that. The ability to take video hands-free without having to keep a running camera is something that will interest many golfers. When you add sharing capabilities to all matter of social media and instructors in one fell swoop then you will have the attention of many more. Although it is not the flashiest golf app out there as it pertains to bells and whistles, it does what it says and the company behind it believes in its development which it intends on continuing to evolve.

The FeedbacK Collect package is available for $79.95 and can be found on their website, www.FeedbacK-golf.com. Although it currently is iOS only, the Android version is currently in development and coming soon.