For Callaway and their golf ball division, 2018-2019 was one heck of a wild ride. It had the highest of highs seeing them continue to do well in market share building on their #2 position and having the #3 overall golf ball (Chrome Soft) on the market. It was also a year of some lows however, with the plague of golf ball cutters seeking off-center cores as well as a misled conversation on compression. Amidst all that, the Chrome Soft and Chrome Soft X continue to be the golf balls that changed the segment for the company, as well as the industry, but Callaway is not satisfied.

If anything, the vision for the golf ball segment of the company seems more focused and task oriented than we have seen them since the introduction of “The Ball that Changed the Ball”. They acknowledge they are #2, and they also reference that others have been there and it has been a spot in the golf ball sector that has always had a lot of turnover. They want to stop that and create not just a more firm hold on where they are, but to be the first to take the fight to #1. You bet that is a huge undertaking, but they have a plan.

2020 marks not just the year of refitting their ball manufacturing, but also diversifying their golf balls to create differentiated products that Callaway truly believes will help them begin to not just hold on to where they are, but to make headway on the market leader.

Oh ok, yes, that title was a little cheesy, but it is true. Callaway is entering 2020 with a crystal-clear vision of what they have done, and will do, when it comes to golf balls.

Stagnant is one thing that Callaway as a company is not. They haven’t been that in years, if one doubts it, they need just look at the club portion of the company and what R&D is doing, and more importantly being allowed to do. Well, golf balls are not much different in that regard, with a fifty-million dollar investment into their Chicopee, Massachusetts ball manufacturing facility the goal was not just development or making a more consistent product, but being able to meet all the demand the company now has and keeping production here in the U.S.A.

As referenced earlier, there have been some…issues…out there on the wonderful world of the internet and Callaway’s golf ball segment, namely the Chrome Soft, was squarely in the crosshairs of the pitchfork carriers in both compression discussions as well as quality control when it comes to centering the core of the golf ball.

To combat these, the investment into the Chicopee plant has taken them not just to a better position technologically in terms of production capabilities, but on the literal cutting edge. I could go on all day about what has been done and added here, but I’ll give you the short version. They installed a four-story rubber mixer into the plant and had to cut a hole in the roof to do it. Oh, automation is up, but they have also over doubled the on-hand staff as well. Finally, we cannot forget to mention 3D freaking X-Rays. Sure, others use X-Ray out there to check the final product, but to address the core of the issue (see what I did there?), Callaway worked with an outside R&D group to create an X-Ray system that is not only used at the end like others do, but throughout the process to make sure the bad apples never make it to the end. Did I mention that they can use it to view the balls on all axis’ and not just one? Now that is wild.

In the end, it’s a showing to the consumers and to themselves that Callaway is committed to the golf ball and to making the best product they can. With that, the all new 2020 Chrome Soft and Chrome Soft X are the foundation once again, just not in the roles you have always known them perhaps.

To understand the 2020 Chrome Soft (CS), it’s worth going back over what this ball did when it was introduced. The CS brought the premise that average golfers don’t seek the same things in a golf ball as what the “Tour” ball segment was focused on. Driver is a club hit just a handful of times compared to the irons and wedges, so Callaway literally rethought the golf ball based on how the golf course is actually attacked by us mortals. Did it work? Well that foundation made the Chrome Soft the #3 golf ball in market share, so yes, it did.

So, what do you do if you are Callaway? Well, you change things of course. 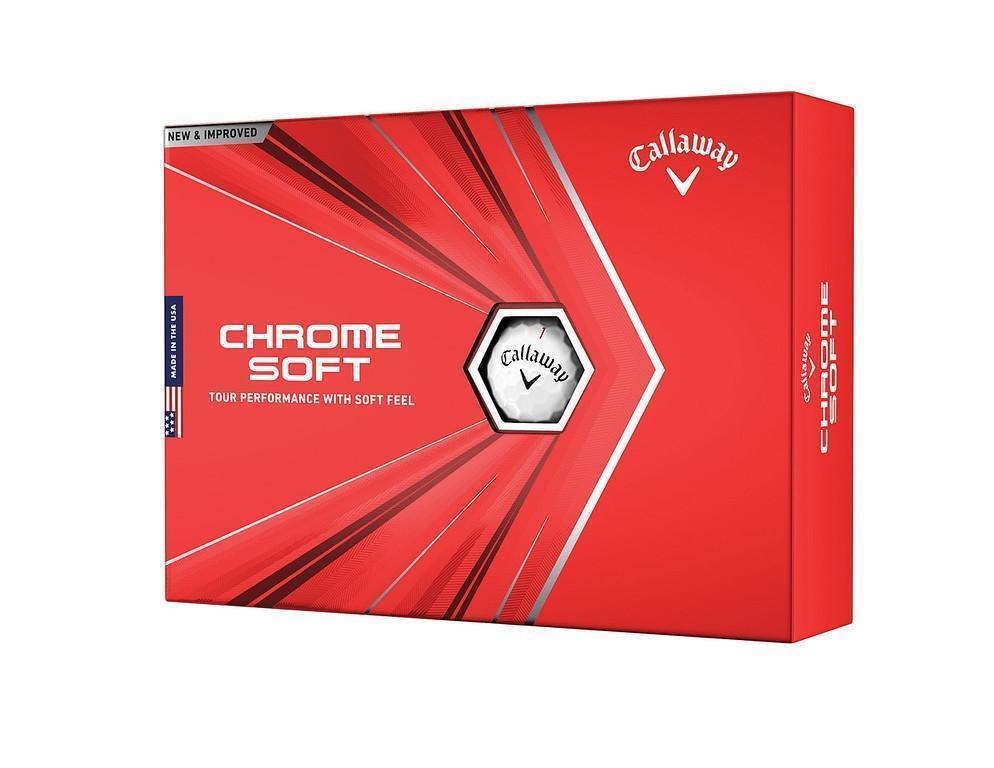 The 2020 Chrome Soft is a 4-Piece design with a whole lot going on. Foremost, the “Dual SoftFast Core” is definitely present, but it’s a new take on the design. This time, the inner core is now 34% larger with the goal of more launch and spin, the thing is this can be done because of the Graphene utilized in the outer core. As Callaway has continued to work with graphene, they realized its strength would allow for a bigger inner core to be wrapped in a thinner, but still amply durable, outer core. As always, the Dual SoftFast Core is the motor to the Chrome Soft, and it’s now been turned up a few notches with added distance throughout the bag (remember that differentiator when we get to the CSX). 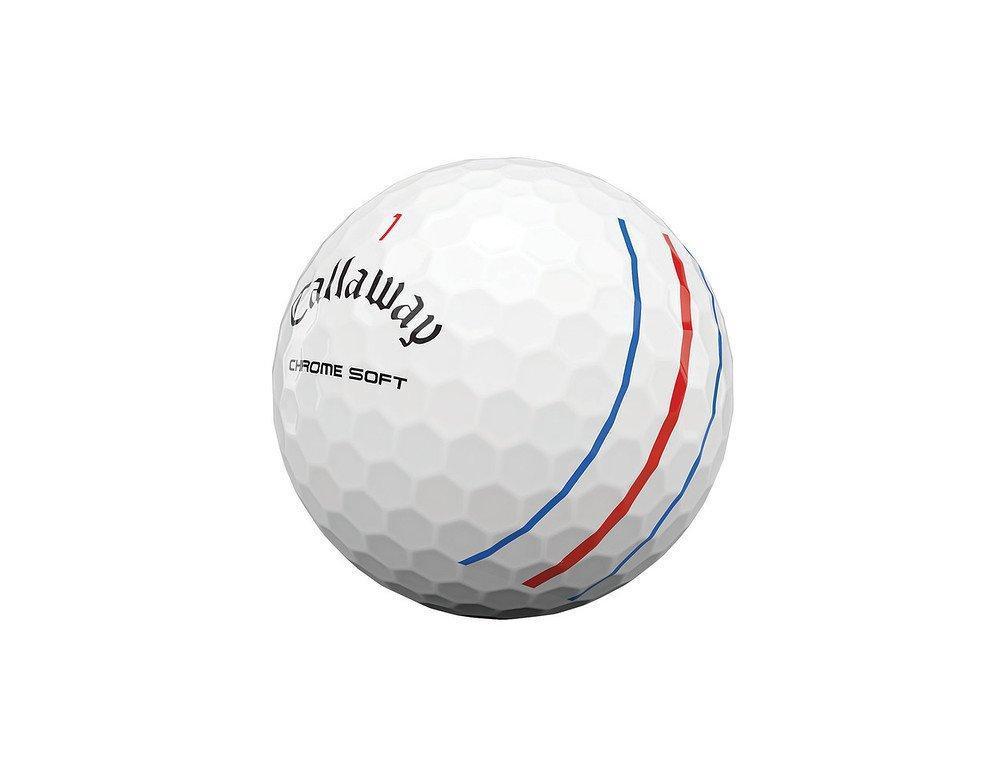 The core is wrapped in a high-speed mantle aimed at consistency in spin and flight with an all new proprietary ionomer material to allow better energy transfer from the core of the ball. Additives included make it a little more of a stiff foundation to allow interaction with the 10% thinner urethane cover to not compromise short game spin for the sake of distance through the bag. Finish it out with optimized aerodynamics to reduce drag from the 2018 and you have what Callaway calls a soft feeling golf ball with ample distance and an optimized flight with higher launch. 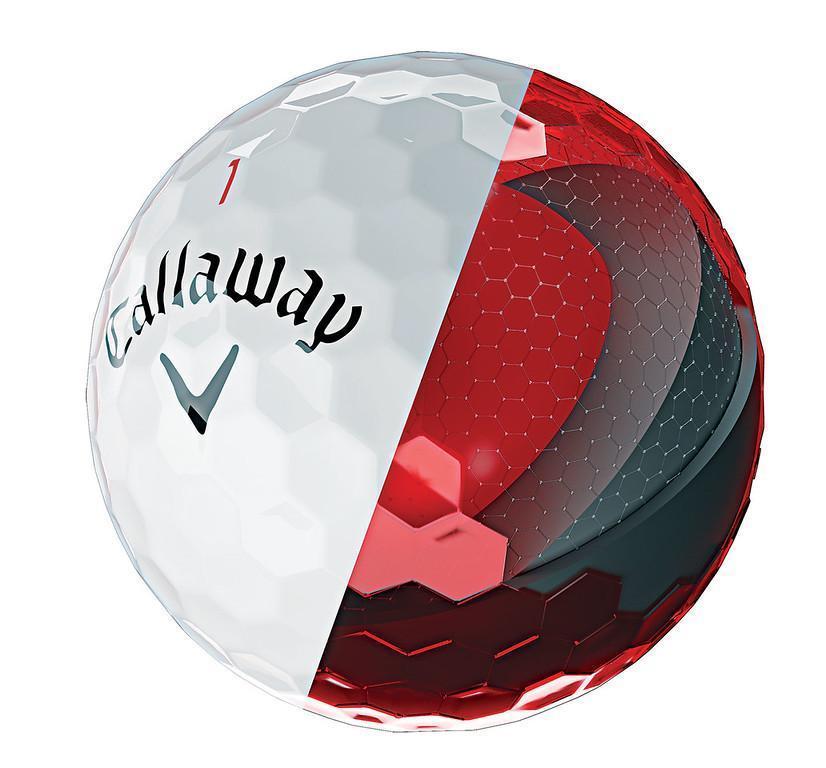 The Chrome Soft will release on 3/12/20 at $47.99/dz and be available in White, Truvis White/Red and Yellow/Black, and TripleTrack White, and Yellow.

Let me say this clearly. This is not the same Chrome Soft X you know. Not even close. 2020’s message for Callaway in golf balls was differentiation, and being real, too many just took the CSX as a firmer Chrome Soft, and that had to change if the company is to keep gaining. 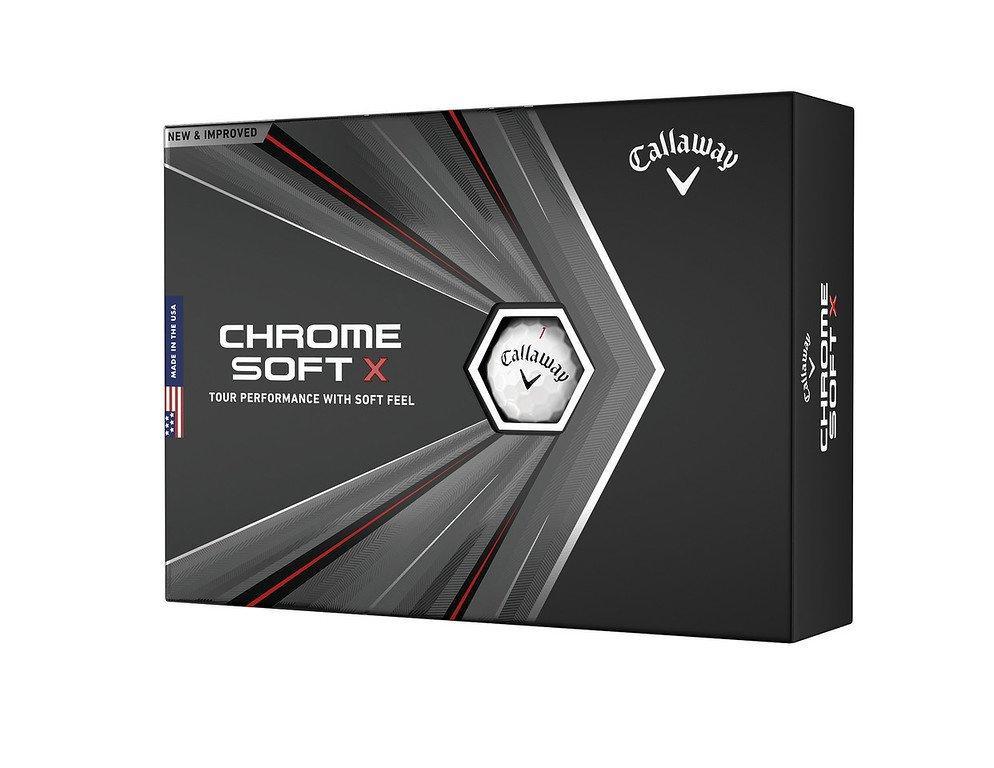 The first change is both the simplest and most deliberate from Callaway. Gone is the red box style similar to the CS, instead, the Chrome Soft X is getting a sleek black packaging that is apropos to what is going on design wise inside the ball. This is a totally different ball, do not doubt that.

The CSX is a 4-Piece design just like the CS, but the similarities stop there. The internal structure has been changed immensely from past iterations with the absence of a Dual SoftFast Core, instead the core is still SoftFast, but 117% bigger than its predecessor. Also, the core is 1-piece…you read that right. It’s all about molecular weighted neodymium rubber, or to us normal folks, a more resilient material for more speed. 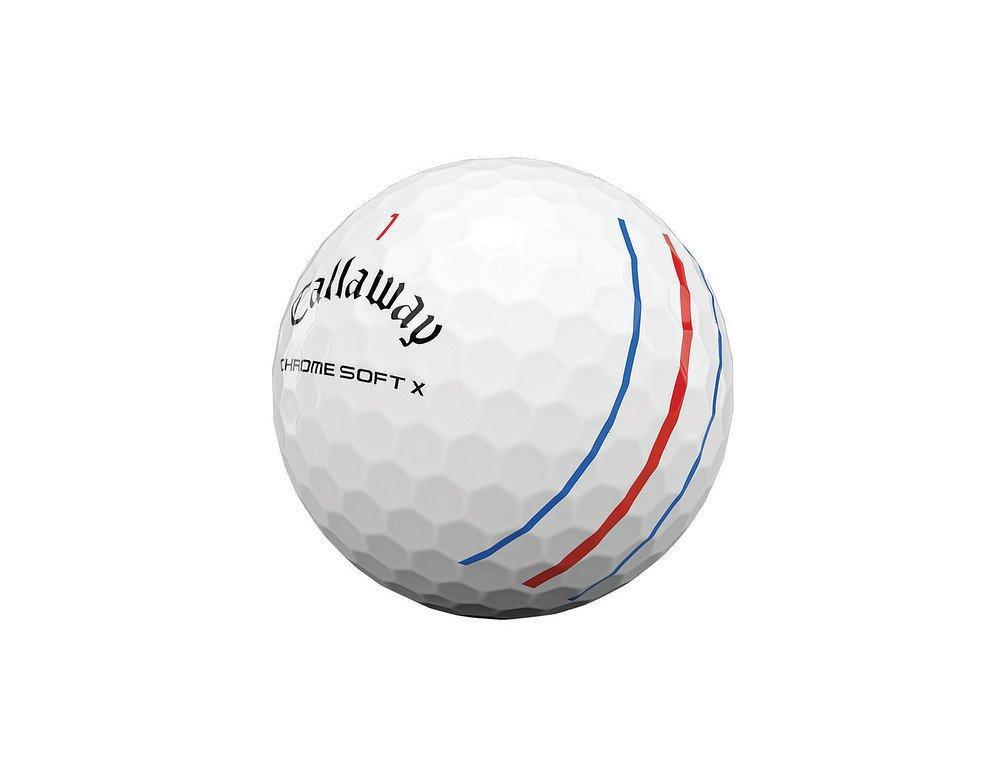 What about the “dual” story we have seen in the Chrome Soft umbrella forever you ask? Well, it’s here with the CSX, but it is in the all new “High Speed Dual Mantle” system. To differentiate the demographics, Callaway knew the Chrome Soft X was missing something that could really make that happen…speed, pure speed. The Dual Mantle system here uses a soft inner mantle to dampen while the firmer outer mantle counteracts that to generate a Jailbreak like reaction according to Callaway. More speed through better energy transfer, but the firm outer mantle right under the core means short game spin isn’t going to be lacking either.

Finished off with a new proprietary urethane that is 22% thinner than that used on the 2018 version, the short game spin is still there but on full swings there is more spin control available for the better golfers who demand that control. Another part of the story though is that the aero design here is 332 hex dimples just like the Chrome Soft, but there is a visual difference between the two balls as they are designed for different golfers. 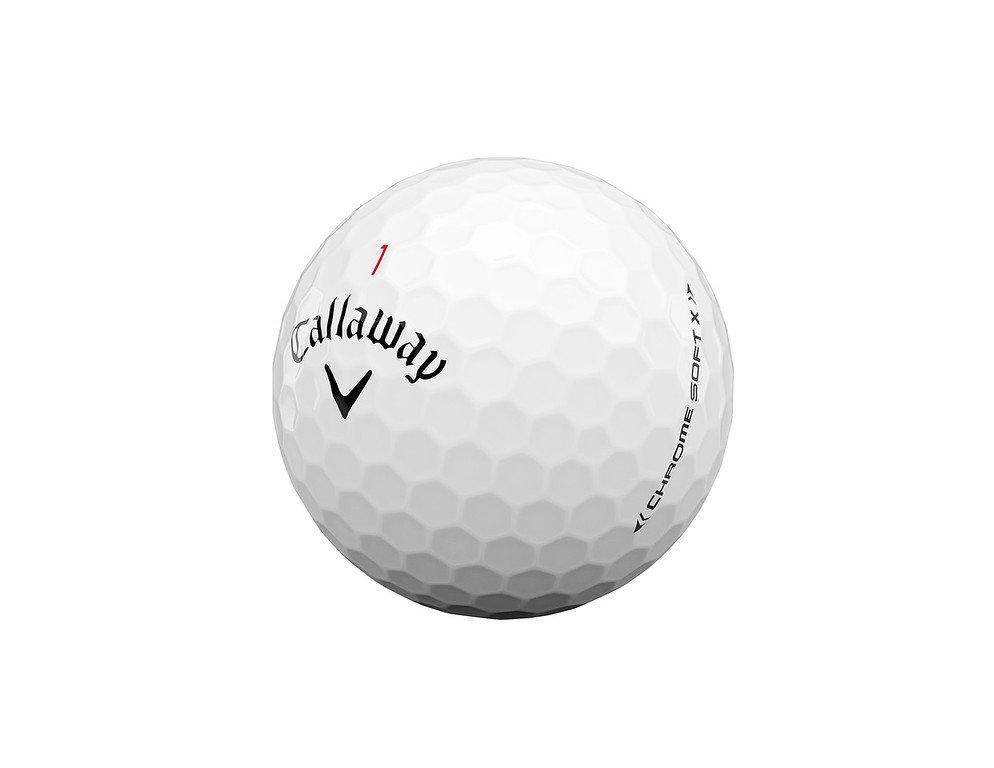 With the Chrome Soft X, Callaway is claiming 7 more yards off the driver than the 2018 version at higher swing speeds. But they are adamant that while speed was the goal for the tee game, the ball will also perform with utmost consistency in the irons and wedges. Therein lies the root of the differentiation of these two balls, the Chrome Soft player will seek distance through the bag, while the Chrome Soft X player wants max distance off the tee with max consistency everywhere else.