Make no mistake the EXS releases were big for Tour Edge and their Exotics line. In fact, one might argue that 2018-2019 was both a confirmation for the company directionally with the decision to attack the price points they did as well as a significant success at establishing a foothold amongst golfers who want price without sacrificing performance. Last go around was big for the company, this one projects to be even bigger.

With the EXS line, Tour Edge had price and performance, with the new EXS 220 line, they look to retain both of those things while also having one heck of a technology story to boot. David Glod, founder and president of Tour Edge, and company are holding nothing back, Tour Edge is swinging for the fences and looking to firmly sit on the throne of being a champion of the people, and for the people.

Tour Edge has found their swagger with the EXS lineup, and the masses very well could be the beneficiaries. Long live the blue-collar companies who embrace the role of being a disruptor in an industry dominated by pricing trends.

Not Just a Refresh

The EXS 220 series of drivers, fairways, and hybrids are not just a slight tweak here and there from the success that was the EXS, that would have been an easy path for another solid and steady year, after all that release sold more Exotics clubs for Tour Edge than they ever have, but David Glod and his company don’t just want solid and steady, they want to send a message. The man himself has stated that they wanted to make EXS 220 so good that anyone who hits them side by side with clubs that are sometimes more than twice their price would immediately question why they would ever pay that when they can get the same bang here for way less buck. Though the color scheme remains similar to its predecessor, the tech and even the shapes have definitely changed.  They have even gone so far as to project based off of early testing feedback by Tour Staff as well as various fitters that the 220 line will shatter the sales records they set with the EXS.  Now that is a bold prediction.

Starting with the big stick, the 220 Driver has a lot going on under the hood. 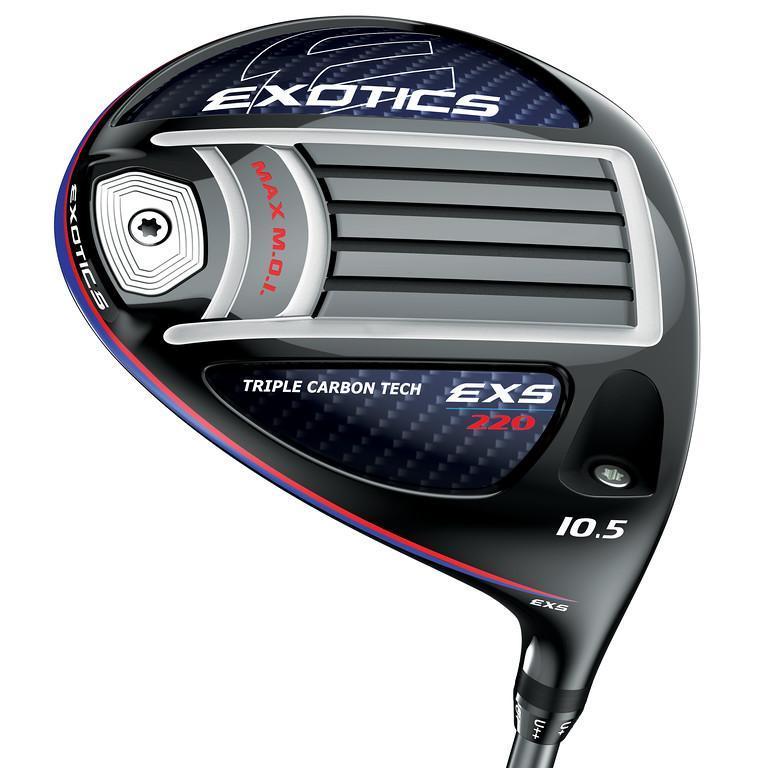 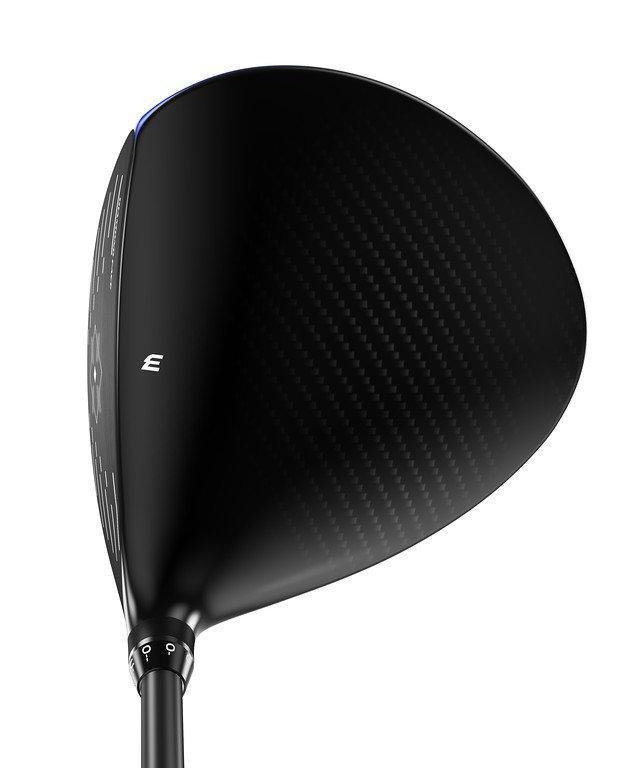 With the driver, Tour Edge is going right for the MOI (moment of inertia), and if their claims prove accurate, at a measurement of 5440 not only is the MOI 20% higher than the EXS, it will be amongst the highest on the market (of note, this is not the combined measurement that some companies hype, rather simply the heel-toe MOI which is USGA capped at 5900). To do this, the shape did change a bit getting more elongated front to back, and it required the placement of a 9g weight low and back. As was the case with the EXS, Tour Edge will make additional weights available for fitting/tuning. The other big piece to this puzzle is the use of “Triple Carbon” which is even lighter than what was used in the EXS, while maintaining all the strength. 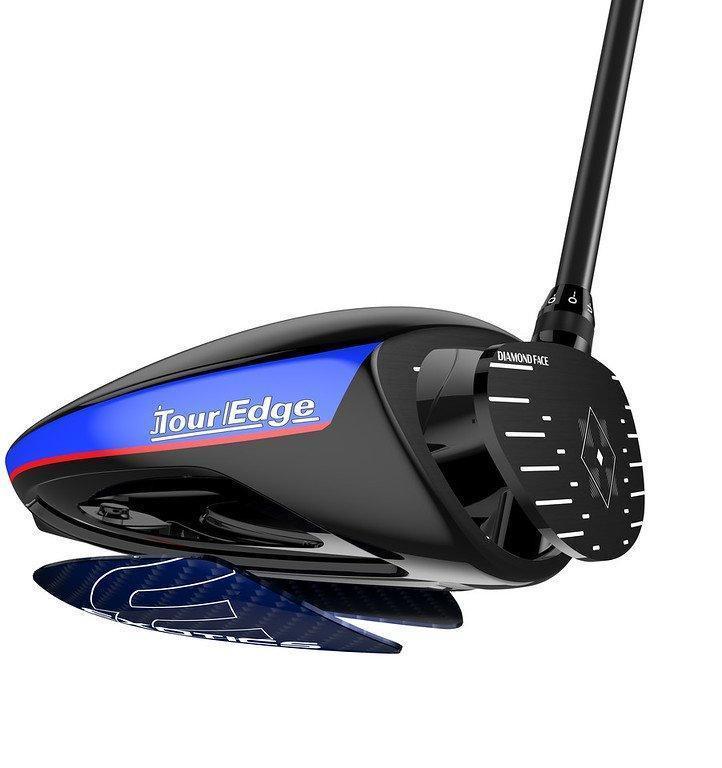 The big story for all the 220 metalwoods will be the face, however. Using 8-1-1 Titanium and a slightly shallower depth than in the previous iteration, what’s behind the face is the real tech tale. Utilizing state of the art “impact simulation software” they have created “Diamond Face Technology” which is made up of 42 different diamond zones of varying thicknesses across the rear of the face with the goal of improving ball speed creation as well as retention along with optimizing spin and off-center strikes. 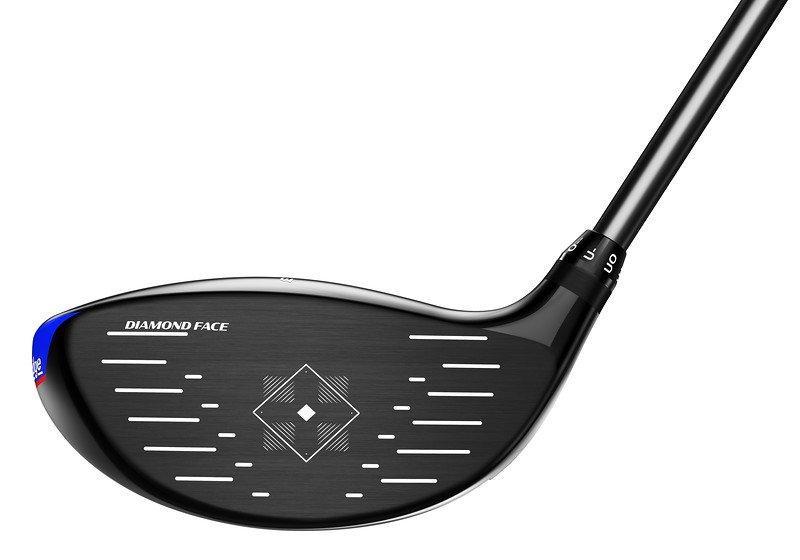 The whole design is tied together with a focus on the fact that to golfer’s sound is feel, and Tour Edge wanted to make sure they got it right with the 220 metals. Using a “sound diffusion bar” internally which is akin to what studios and concert halls use to enhance the acoustics, the company believes they have taken a step forward with the sound/feel of the EXS 220.

As you can see, this is not just a re-branded EXS. There is a lot built into this one, and at a much easier on the eyes $349.99 price point.

Since the inception of the company, fairways are where Tour Edge has always made the most noise, and that doesn’t look to change with the 220 release. 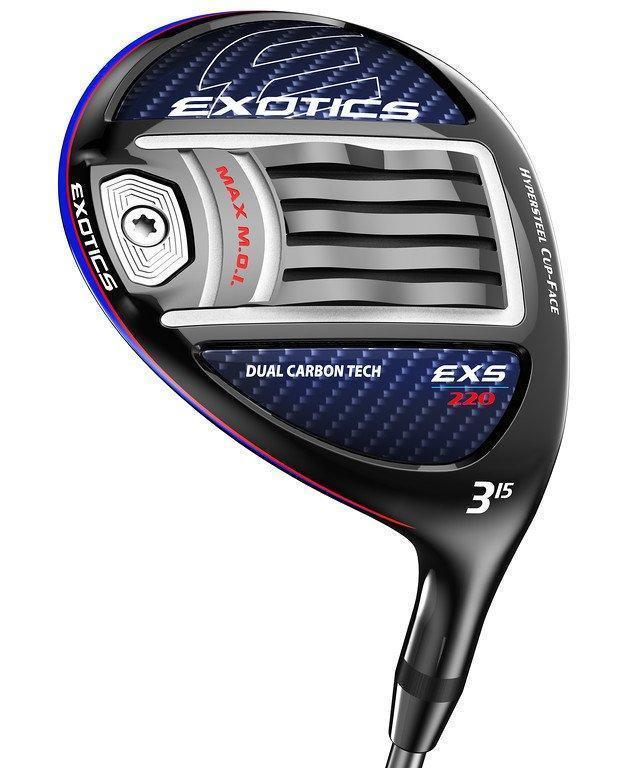 The fairways will consist of three different 3-wood lofts (13.5°, 15°, 16.5°) as well as a 5-wood (18°) and 7-wood (21°). Lefties will have the 15° 3-wood available to them. These are non-adjustable heads as the company wanted to save the added weight an adapter can bring and distribute elsewhere in the head to maximize performance. 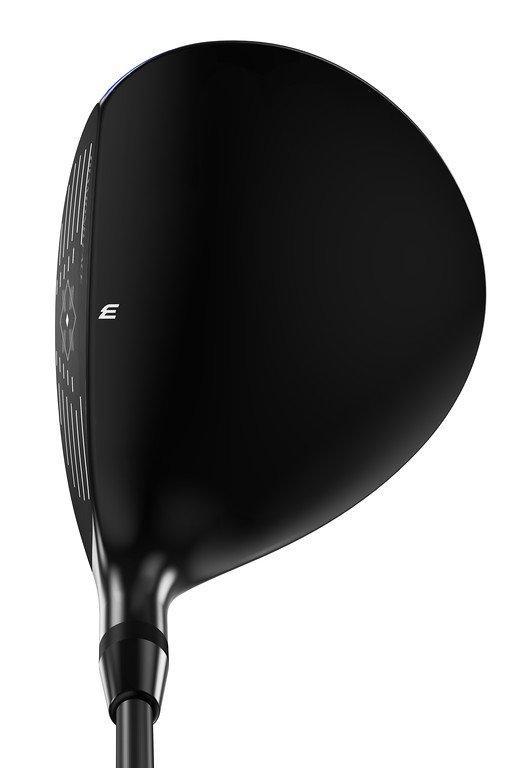 Speaking of performance, a lot there is going to hinge on some big material and design changes. A new Hyper-Steel that is allowing a 14% weight savings allowed the reposition of that into the center of the sole as well as the rear of the club. The company is calling this “dual concentric weighting” with the goal being easy launch but at low spin. 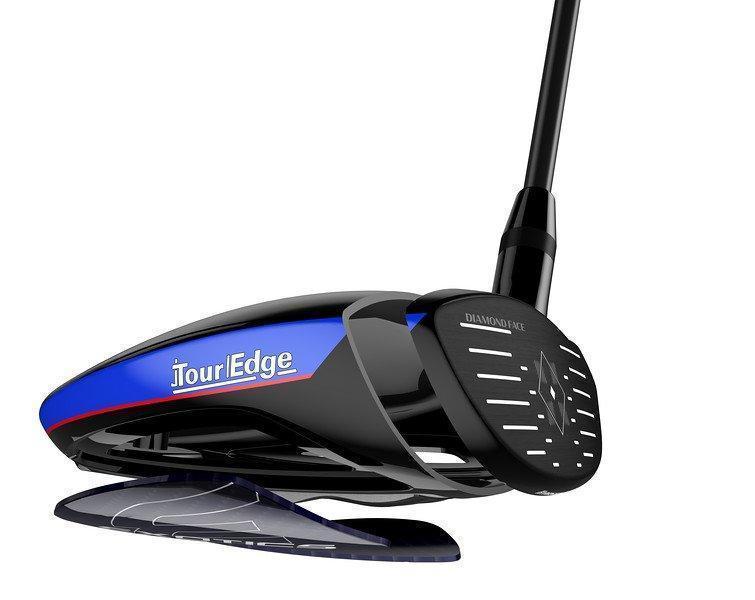 Dual carbon fiber is at play here in the sole allowing a larger sole weight to be applied and to really try and increase the MOI from the EXS fairway woods. As is the case with the driver, there are various weights available to fine tune and fit the 220 fairways to the user’s needs/wants. All this weight savings also allowed for wider channels across Tour Edge’s patented Slip-Stream sole section which aims to channel away turf even more efficiently to increase the off the deck playability and clubhead speed retention. Additionally, the same “sound diffusion bar” design as from the driver is being applied here in the fairways. 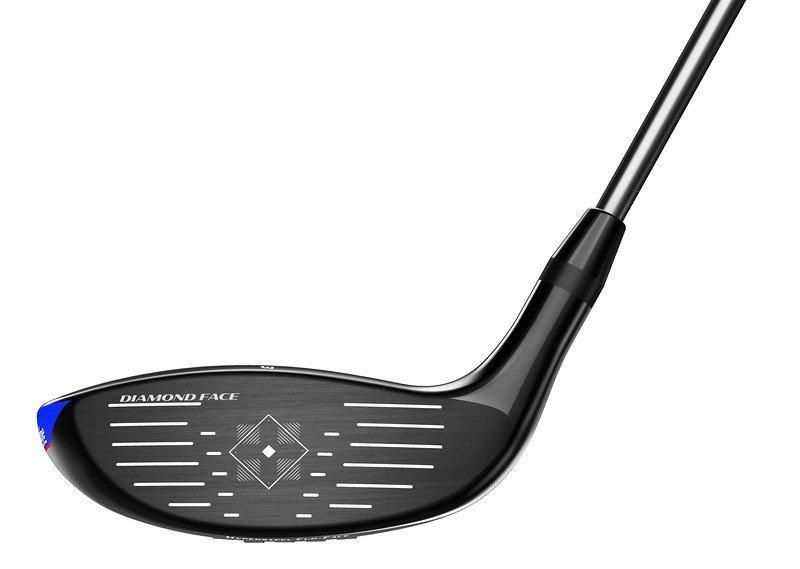 Most notable with the fairways though, Tour Edge continues to use the cup face design they created and revolutionized golf with, but now with their “Diamond Face Technology” there are 44 different diamonds behind the face which vary in their depth and width to optimize across the face speed creation and retention through a much improved sweet spot area.

If the performance lives up to the design story, these $249.99 fairway woods could further solidify the EXS 220 lineups potential to truly turn some heads.

Last but certainly not least, the 220 metalwood lineup is being rounded out with a hybrid design that looks to build on the EXS which got a lot of play on the PGA Champions Tour staff for Tour Edge. 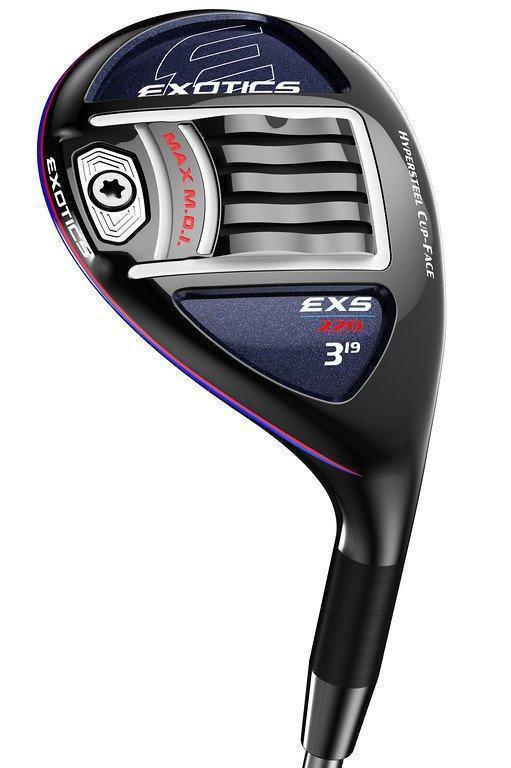 Using much of that Tour feedback, the shape here has altered from the EXS, getting slightly deeper from front to back in order to shift some weight and increase the overall stability of the design. The use of a 4g adjustable back weight is a part of the equation for stability, but equally important in increasing the playability by raising the CG in the hybrids a bit is the use of two sole indentations. All this comes together to not only make them playable, but to kill some spin as well. 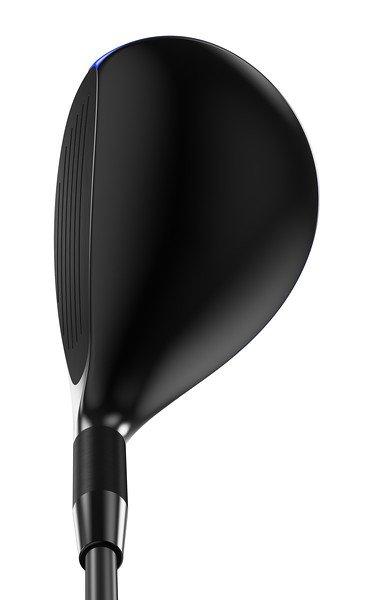 When you take those shape, MOI, and CG changes and combine them with the new and lighter hyper-steel face with the same Diamond Face Technology design as the fairways (44 diamonds) and a 360-degree Face Cup design, this one 100% looks to take aim at the longest hybrids out there. Tour Edge actually calls it taking the power of a fairway wood and encapsulating it into a hybrid. 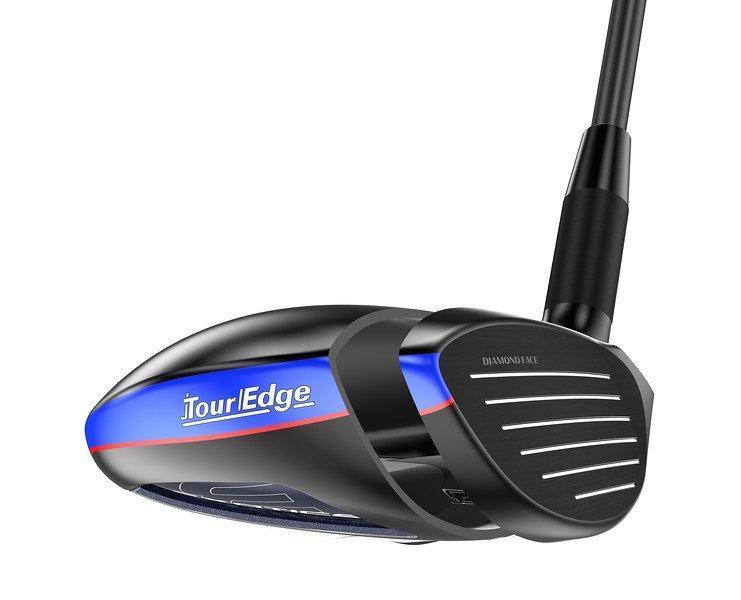 There is a lot to take in with the EXS 220 metalwoods, tech, talk, price, hype, all of it. How will it all sort itself out for the company and for golfers alike? Will it be another hit for the company? Time will tell, but stay tuned to THP as we will be reviewing the entire lineup in the coming weeks with ample feedback and data to dive into.