Felt like once I got going, I couldn’t miss. That was fun!
2019 Granddaddy Participant!
Proud Member of Team 99 Malort & 2017 Callaway Gauntlet Champs!

The Mav 5H has become my second favorite club off the tee, after driver. Love this club!
In my

Snowman said:
The Mav 5H has become my second favorite club off the tee, after driver. Love this club!
Click to expand...

I’m loving mine too. The 4H was my favorite until I got the 5H. Just a very versatile club.
Grandaddy Fusion 14 Stand Bag:

Finally got my standard Mavrik 4 wood I ordered in early March. Was stuck at the store but with all the retail golf shut down wasn’t able to even get a body to answer phone. Anyway, called GT customer service and they had someone call me from the store (receiving) and confirmed both my 4 wood and my wife’s Mavrik 5 wood were there so they shipped to the house. Now, just need tge provincial government to let the courses open, it is getting a little ridiculous up here.
Currently playing:

Scarnici said:
Mav Max 5W on its way to Chicopee. Looking forward to getting this one into the bag
Click to expand...

I think if I HAD to choose a singular club out of the Mav lineup that has improved my overall game the most, it would be the Max 5w. What shaft did you go with?
Spencer

Snickerdog said:
So after swapping the shaft on the 3SZ yesterday I was able to get out with it today. I really believe I made the correct choice in going with the Riptide shaft in this fairway wood.
Makes for a good tee weapon on a couple tight par 4's we have.
Click to expand...

What shaft did you have in it? Mavrik SZ 3 wood is my last ponder (forever ) but not sure if much different from Rogue SZ 3 wood I play.

tomcat said:
I think if I HAD to choose a singular club out of the Mav lineup that has improved my overall game the most, it would be the Max 5w. What shaft did you go with?
Click to expand...

I went with the stock helium. I’m looking forward to testing this thing for sure. I love the footprint of the Max. Looking down at address gives me so much confidence
Representing #TeamNEWENGLAND in #THPRegionalRivalry

The Helium is a great shaft. I played one in my driver for a couple of years, and really liked it.
Spencer

Kenomikes said:
What shaft did you have in it? Mavrik SZ 3 wood is my last ponder (forever ) but not sure if much different from Rogue SZ 3 wood I play.
Click to expand...

It had an Aldila in it, I swapped it back to the stock Riptide. It just works better, feel and control are better for me.
Grandaddy Fusion 14 Stand Bag:

Anyone have a recommended ferrule for the Mavrik fairways? Just picked up a 5w head that I’ll be shafting with a HZRDUS Smoke Black.

I did a distance fitting earlier this week and was recommended the Mavrik Pro and Apex hybrids. Anyone have comparisons of the two?

Immediately what I can see from pictures is the Mavrik Pro has a shallower face and is slightly more rounded and the Apex has a more squared off profile. Apex is smaller than Mavrik Pro. Apex has a weight port.
#MorganCup2019 #TeamParadise

After messing around with the riptide in my mavrik max head I think I need to do a 60g riptide in a mav or max 3 wood, sorry for the skim, but can anyone compare the reg and max off the deck?
Under custom

One swing with the Max HW today, and it was a beauty. 238 into a Par 5, with a 15-20 MPH wind coming back at us. Hit a bomb with a penetrating flight that ended up pin high off the right side of the green, leading to my only birdie. If I had better alignment, I would have been dancing.
Grandaddy Fusion 14 Stand Bag:

Finally had the chance to get out today. Due to demand, my home course is running a lottery for playing times over the weekend. I was lucky enough to have secured a spot today. My G400 Max did not want to play nicely today so it was effectively replaced with my 4w off the tee. Man does this thing really go. It's so easy to hit and hit straight.

I had a long par 4 where I hit two beautiful shots with my 4w and had a short putt for birdie. After that hole, my G400 Max stayed put. I really am loving this combo with my two Pro hybrids.

In addition, I had a nice 200+ par 3 that my GPS app said was playing like 217. I choked down on my 3h and landed it about 10 feet from the hole for a nice birdie. I'm actually thinking of getting fit again for the Mavrik driver based on my play today.
Last edited: May 2, 2020

Man I really miss hitting this Max 3+ and Max 5w on course! The feel and sound at impact is so addictive. These have to be some of the hottest faces I've played.
ProudEST Member of TEAM THP

for The Grandaddy 2018!
Amped AssCap of TEAM THP

Only played nine today but had a couple 3W and 5W shots. I have the SZ model in both. Easy to hit off the deck and launch is great. Shot of the day was a 5W from 208 just a bit short of pin and about 3 yards right
Grandaddy Fusion 14 Stand Bag:

M2Giles said:
I did a distance fitting earlier this week and was recommended the Mavrik Pro and Apex hybrids. Anyone have comparisons of the two?

Immediately what I can see from pictures is the Mavrik Pro has a shallower face and is slightly more rounded and the Apex has a more squared off profile. Apex is smaller than Mavrik Pro. Apex has a weight port.
Click to expand...

Both good clubs. From my experience it's going to be highly personal between the two. When I tried the Apex I hit it too far, couldn't spin it enough, and if I did, couldn't control the shape and direction well. I had to work my butt off with it, which is never good, and I didn't like looking at it either. I think the high toe is what was screwing with me. It's supposed to make it more like an Apex iron on the face, but I bounced back and forth between it and an Apex cf19 4 and I couldn't put the same swing(*) on them with the same results to save my life. lol It was frustrating. Partly because I had purchased the apex hybrid expecting to love it. It's results were surely my failing. I had a tendency to lead with the heel and push everything with it, like I do with a club with a ton of offset. Which it doesn't have. I compensate for what it seems like it will want to do, so I feel like it was in my head. When I could sort it out I blasted the daylights out of it with way too little spin or control and in combination it just wouldn't play for me. I sold it to my best golf friend and it's his favorite club by a large margin.

I know plenty of others that love it and assume it still gets excellent ratings/reviews.

I play a Mavrik Pro 2H currently, and more than like it. Visually it appears much more neutral to me. It doesn't try to mimic an iron though, so that might be a big part of it. I like that it's slim, and I have much better control with it. I can flatten it out pretty easily, and it seems forgiving enough, but probably less towards the toe than the apex. Maybe more toward the heel though. That's not a common miss for me, but I've noticed pretty incredible ball speeds with it when it does happen. I can also throw some loft on it and spin it beautifully, and predictably. I can work it better, everything better. It's just obviously much more suited to me and is way more of a scoring club for me than the Apex would have ever been, even though they're kind of geared towards the same players. I just don't know if an iron shaped hybrid will ever work for me without effort. My game is based on my iron play, but they don't look like an actual iron because they're not, and I don't have 80/90 gram graphite in my irons, so I don't see a need to try make them the same. Like I said, personal preference.

I'm sure you can read about cg placement and trajectories and everything else, so I won't bore with my thoughts on some of that. I think they're probably both excellent clubs.

Maybe someone that had an Apex all season and switched just to try a Mavrik pro will have more insight. I don't see a lot of Mavirk Pros being played/talked about though, much as I try to change that. A Pro 3H went earlier today for $107.50 and I was just sort of praying it was a THP'er that got it, because that is a phenomenal deal.
Last edited: May 2, 2020

McLovin said:
speed is definitely some of it, but are you a low launch and/or low spin player? at that speed, I feel like you're going to need some spin to get the most out of a lower-lofted fairway wood, even off the tee.
Click to expand...

Thanks for the thoughts! I'll report back. I only get 190-210 with a few longer ones mixed in with driver but can hit my Epic 5W just as far. But, straighter. I've loved strong 3s in the past, shorter, smaller head, whatever it is, they just work better. I'm just going to do it with my Max 3+

Time to see hat kind of damage we can do with this one! 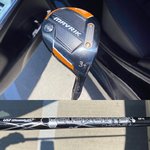 mikeg_74 said:
The Mavrik 3+ lived up to the hype off the tee today. A couple of tighter driving holes and all I really needed was 220 or so off the tee and this one delivered. A mixed bag from the fairway, but that was more swing than club, but when I connected it went a long way and helped me in a par5 today.
Click to expand...

Do you play a 3+ a lot off the fairway historically, or is that just part of trying out the new Mavrik?

OldandStiff said:
Do you play a 3+ a lot off the fairway historically, or is that just part of trying out the new Mavrik?
Click to expand...

Yesterday I had a pretty impressive shot with the regular Mavrik 3 wood. I impressively topped my tee shot about 45 yards and had 265 yards left to the hole on the par 4. I pulled my 3 wood hoping to get it up there somewhere that would leave me a little pitch. I smoked the shot and the ball ended up in the bunker just on the left side of the hole, pin high. Yep, that was a 265 yard 3 wood off the deck. My buddy just laughed that I was able to do that.
Proud Team THP alum in #TheGrandaddy 2018