I hit it this weekend. I was pretty impressed. The dispersion seems tighter than my TSI3, but miss-hits are about 20 yards shorter.

Both seem solid, but I'm OK with wider dispersion and longer distance.

Bullfrog said:
On me??? Why would you rely on me? You know I'm not reliable. I'm surprised you don't have thoughts on them yet.
Click to expand...

I haven't seen them in hand yet. Truth be told, I have yet to even take a full swing in 2021. However, these are definitely on my must-try list. As long as they are #BullfrogApproved
Want to know what's in my

ddec said:
I haven't seen them in hand yet. Truth be told, I have yet to even take a full swing in 2021. However, these are definitely on my must-try list. As long as they are #BullfrogApproved
Click to expand...

#BullfrogApproved?? Is that even a thing? You've all seen my swing. Maybe it would be #BullfrogAcceptable...
In my

Bullfrog said:
#BullfrogApproved?? Is that even a thing? You've all seen my swing. Maybe it would be #BullfrogAcceptable...
Click to expand...

Hahaha fair enough.
Want to know what's in my

Looks like we will have to wait a little longer to find out how these work. My Driver, 3W, 5W and hybrid were supposed to be delivered today. But Shocker, they haven't even shipped yet. So, hopefully some time soon!
In my

Bullfrog said:
Looks like we will have to wait a little longer to find out how these work. My Driver, 3W, 5W and hybrid were supposed to be delivered today. But Shocker, they haven't even shipped yet. So, hopefully some time soon!
Click to expand...

It’s totally worth the wait! My Sim2 driver is incredible. I hit the Sim2 hybrid and scheduled a fitting but it was cancelled unexpectedly. Can’t wait to get fit and get it ordered.

Snagged a Sim2 Max 3w today and put it right to work. Previously was gaming a M2 and and hit it really well for the most part but wanted to upgrade because we'll internet golfer. My primary use for a 3w is off the tee while occasionally using it off the deck. After a couple get to know you holes I really found a comfort zone with the Sim2 and started hitting some great tee shots. The Sim2 feels a little lighter than the M2. Not sure if it officially is, but it felt lighter. Distance wise I was satisfied. We played a course I don't play a ton so I can't say if it was mu h of a difference in distance but it was plenty long. I did feel like it was noticeably more forgiving though. Heading to Florida later this week so I'm excited to get more course time. 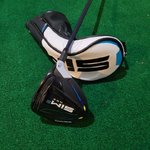 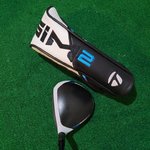 Did anyone else get a 24g weight in the standard sim2 head?
I thought it was a 16g in standard and 24g in max.

Looks like 16g steel in SiM and 24g tungsten in SiM Max for higher launch and more forgiveness.

Still no shipping notice... Boo Hoo. Hopefully soon.
In my

What shaft is DJ rocking in his SiM2 on the cover of Golf Digest?

Bullfrog said:
My Driver 3W, 5W and 3H were supposed to be here on 4/3. Got an email from DSG. Stating that my Driver and 3W would ship on 4/27. The hybrid would ship on 5/15 and 5W on 5/20. I ordered on 3/6. That is a long time... Then yesterday I get an email stating that the driver and 3W shipped yesterday and would be here tomorrow. Well, that's way before 4/27 and way later than 4/3. I'm excited that they are coming and am hoping they are way off on the delivery dates of the 5W and 3H.
Click to expand...

At least they are getting to you! Looking forward to it.
Want to know what's in my

Driver and 3W are currently sitting in the box on my porch. Will get home and snap a couple pics for you guys. I'm sure no one on here has seen them yet... 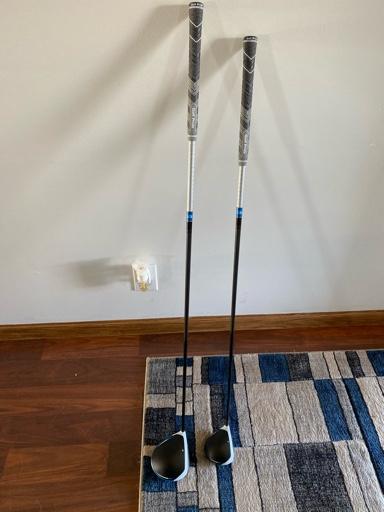 Sent from my iPhone using Tapatalk
In my

I just picked up a new SIM2 driver in 9 degree last weekend. I went through a couple fittings at the new fitting studio at the PGATSS near me and the SIM2 was easily the best for me. It beat out my TS4 as well as the Epic Max LS, the RAD Speed and the TSI3. The most impressive to me was not only was it the longest for me but it was also the most accurate. The Project X Hzrdus Smoke RDX Black 70 in 6.5 gave me all that without having to spend more on a custom shaft. We just cut it down to 45” and it was good to go.
My first round with it was a revelation. I had a couple bad misses due to bad swings but the rest split the fairway or were just off. I had a few that were my best drives ever on that hole and 4 or 5 were 300+.
I’ve never played a TM driver or any TM club before but so far I’m loving this SIM2 driver. I can’t wait for my next round.
Whats in my

Shots recorded and measured by Arccos 360

Sim2 max 3w was the star of my Florida trip. I got off the tee better than I have in a long time. Distance was right there with the other guys who were hitting driver and the accuracy was greatly improved compared to my normal driving accuracy. One of the guys mentioned he was looking to replace his 3w this year, and took a few swings and both were rockets. I wasn't sure if the club was going to make it home with me haha. Really looking forward to the season and having more confidence as I stand on the tee.
In my

I wasn’t planning on making changes to my fairway woods this year. But after having the sim max 3w in my rental last week and then playing my clubs this week there just isn’t a comparison for my epic flash 3 wood. Hard ponder on 3w. Sim max was just flat out longer by a good 10-15 yards and way straighter and easier to launch. And potentially 5w or 7w depending on gapping. Although I’m pretty good with my HW and 4h.
[WITB]
Driver TaylorMade R9
Heavenwood Epic Flash
4h Titliest 915h
5-P Calloway X2 Shot
Wedges Cleveland .588 Rotex 2.0 52, 56, 60
Toulon Memphis Putter
[/WITB]
J

Can you take it to a store and compare? Was it always like that? You should be able to return it if it's a defect.

sizzquatch said:
Does anybody else have gaps in the driver face/ring connection pt?
I noticed it cause I'm just nitpicky but I can actually stuff things in there on either side. I know it can't be "perfect" but I'm ust curious if anyone else has the same experience.
Click to expand...

mine has a tad bit of a gap. But it's not as pronounced as yours.
In my

So I went to the range on Saturday after getting the Sim2 Driver and 3w. Let me say the range balls are total crap. But anyways. I hit a small bucket. Things started out going right on me. As in a big push fade almost a slice but not quite the turn of a slice. I started to figure it out a little bit. Then I proceeded to hit the 3W. Same thing push fade with crappy balls. So, I chalked that session up to crappy balls in conjunction with trying to hard. So, last night I grabbed some tees and a about 30 balls from my shag bucket and hit them into the field. WOW!! What a difference a decent ball made. Was piping them! All went decent height and straight. I don't have any distant measurements. But I hit a few of my Bstone driver as well. The balls that I hit with the Sim2 seemed to go further. The only way I could tell was because the ball looked smaller before it started coming down. If that makes sense. I hit some with the Sim2 Max 3W too. That thing was awesome as well. Cut right through my grass like nothing. And just launched the ball! I would say the 3W was going as far as my Bstone driver was. Again, just based off looks of the ball on descent because I was hitting in to a cornfield. I haven't been this excited about clubs since I got the Bstone J40's. So as far as comparison goes. The head shape of the Sim2 sort of reminds me of the Burner driver albeit white. The sound is more muted than both the Bstone J40 and J15 drivers. The ball just explodes off the club. I don't have access to getting ball speed but I guarantee you it is faster than either the J40 and J15. Can't wait to get some more swings in with it. Playing close to home tomorrow. Then heading to NC to see my daughter and golf. I will let you guys know how it goes. Hopefully I didn't waste all my good swings in my back yard hitting into a cornfield.
In my