Does anyone know if there is anything in the rules dictating relief due to intentional distractions?

Example : I play some courses that may have a hole or two that play alongside public roads. There are many times when passing cars will intentionally honk their horns or scream out the window in your back swing. This is obviously an outside agency intending to interfere with your concentration. Should a player be allowed to hit another shot? The human mind is conditioned to focus on sudden sounds, especially something like a car honking (imminent danger). Also, there is clear intent to distract you.

I agree, we should all be able to play with background noise like birds, traffic, music, people talking. But I also think sudden noises generated to startle a person are a different issue altogether.

No relief, to bad drivers do this though.
Bag:

No relief or rule allowing relief. That said in my regular group when this happens we give a free mulligan. Sadly in tourney play you can not.
What's in the bag

If only there was. The course I grew up playing has 3 holes where this is a possibility of happening, and we all knew this. Heck there are two OTHER holes on the same course that have both a (Par 3) tee box, and fairway of the next hole (par 5) that runs parallel to a train track. So close in fact that the tracks are used as the out of bounce markers. If you can hit a tee shot or from a fairway as a train conductor blows his horn, you can handle ANYTHING!

Unfortunately, you have to understand this may happen and take your lumps.

Here is a picture of course I grew up playing...little 9 hole track, but all the tee and greens I listed are all holes where distractions are a possibility. You can hear the trains coming and that helps, so you're half way ready, but as you can see. On #7 you're teeing off less than 10 yards from a freight train! 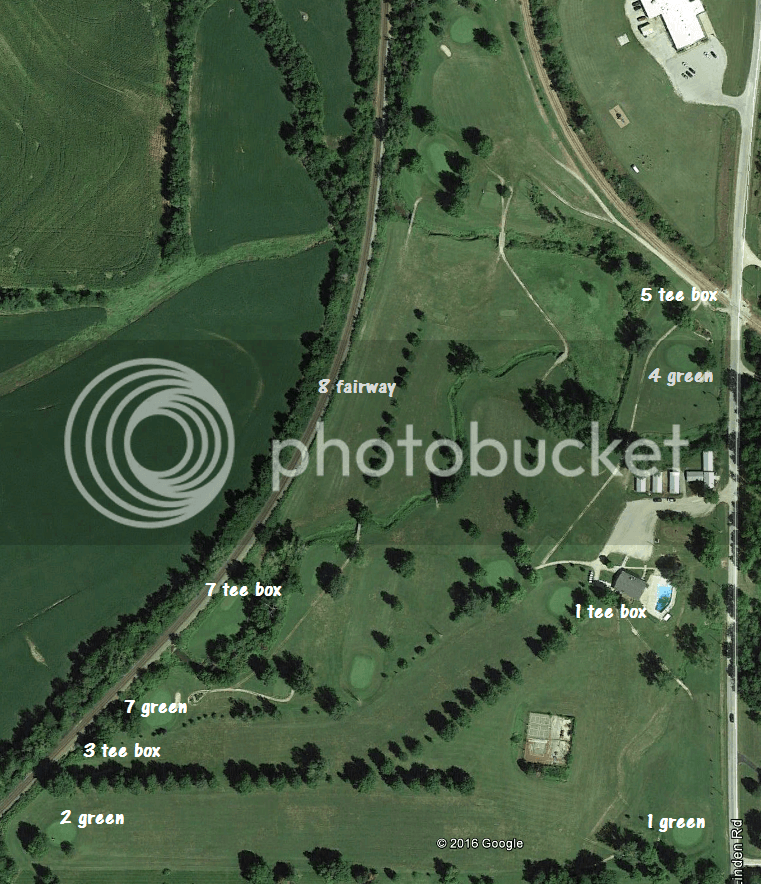 PROUD Member of the Callaway A-15 Club!

I don't believe there is relief for this situation in the rule book. It is a sad state that people do this but I fear you just have to tolerate it. I have a friend who is PGA rules official and will check with him and respond back.
WITB
Callaway Epic 10.5, Graphite Design Tour AD IZ 5 Shaft (R)
Callaway Rogue 3 Wood Evenflow Blue 65 Shaft (R)
Rogue Hybrids (3,4) Evenflow Blue 85 Shafts R
Callaway CF 16 Irons 5-AW Recoil Proto 95 Shafts F3
Callaway MD Wedges, 54, 58 Recoil Proto 95 Shafts F3
Putter: Cameron Newport, 34"

I have no clue if there is a rule but from others responses I am guessing nope, lol. I wish there was as my home course has 6 out of 18 holes that the Tee box borders the road and many think its funny to honk or yell out the window during your swing.

There is no rule that gives you relief or a Mulligan...some people are just idiots.

Sent from my XT1055 using Tapatalk

HeadinSouth said:
There is no rule that gives you relief or a Mulligan...some people are just idiots.

Sent from my XT1055 using Tapatalk
Click to expand...

Related question - granted we don't get free relief from being distracted, if the guy making the noise is playing with our group, shouldn't the rules penalize him for intent to distract? That should shut up other inconsiderate players pretty quick. Strike one is a warning, strike two is a penalty.

Unfortunately, there are no do-overs for people's bad behavior. In your foursome, however, a player can be penalized two strokes for intentionally creating a disturbance, or if you're in a competition and they do this intentionally, they can be disqualified. You, however, do not get to rehit your shot.

There have been some weird "intentional distraction" or "disturbance" penalties enforced, too. Back in 1985, Curtis Strange was penalized two strokes for farting when he teed off because someone complained to an official about it. He replied something like "You might as well penalize me a couple more strokes because it's going to happen again."

And this kind of stuff starts happening as we get old. "Way to grip and rip" takes on a whole new meaning.

I've also noticed that swearing isn't specifically mentioned in etiquette section, but I guess some people consider it an "intentional distraction" or "disturbance" but you're not doing it while they're hitting the ball. You usually do it right when you've mishit your ball. Like the time you dropped that f-bomb when you were having a decent round then sliced that drive on 17 off into the water hazard during a tournament.
Julie

No relief unfortunately. I don't see this issue at my course but do have a ton of golfers with no etiquette that think they are the only ones on the course and can scream every word at the top of their lungs...
Driver: