She's...uh...unusual. I'm confused, yet intrigued at the same time.

Sometimes I think so, but then I re think it. 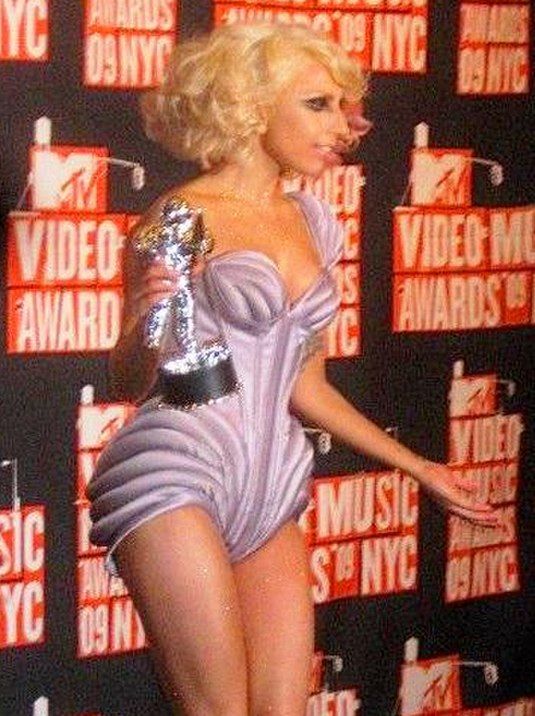 Really?may I ask why?
Our attitude and how we think has a tremendous effect on how we play and score

There were rumors that she might be packing some heat. Not my cup of tea.

Spoiler
I warned you. 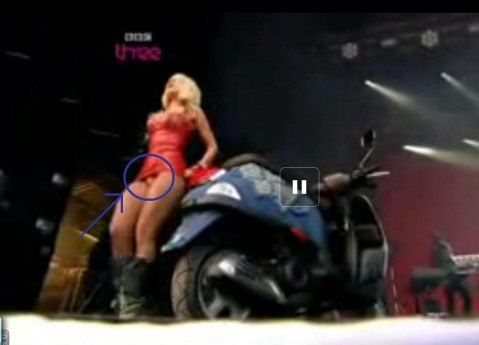 I'm watching a SNL repeat. I saw it the first time around, and am watching it again because of her. She's funny in a couple skits, her performances are weird, and I can't decide whether she's sexy or not. Watching her makes me kind of uncomfortable, but I can't look away.

Darrell Hammond was hilarious in this episode as the Arnold Schwarzenegger on Weekend Update. Kenan Thompson was very good as Charles Barkley, too.

Esox said:
Watching her makes me kind of uncomfortable, but I can't look away.
Click to expand...

The girl can't even sing.Just don't see the fascination with her
Our attitude and how we think has a tremendous effect on how we play and score

I have heard that, but there's a pretty extensive bio on her which would be pretty hard to create if she was indeed a dude. I think she really has some talent hidden under the bizarreness. She's this created character and I get the feeling she's kind of having the last laugh as she's raking in millions upon millions. It's like a con, yet it's also kind of good.

BigLeftyinAZ said:
The girl can't even sing.Just don't see the fascination with her
Click to expand...

Watch the jazzy version of one of her songs she does near the end of SNL. She's wearing this bizarre costume, yet if you look beyond the shtick, I think there is talent there and she's just smirking at everybody.

She has musical and theatrical training.

Esox said:
Watch the jazzy version of one of her songs she does near the end of SNL. She's wearing this bizarre costume, yet if you look beyond the shtick, I think there is talent there and she's just smirking at everybody.

She has musical and theatrical training.

I'll pass.I've heard a few songs on the radio and not impressed
Our attitude and how we think has a tremendous effect on how we play and score

With out knowing, or seeing the obvious, when in doubt, look at their (throat) "adams apple". A man's "adams apple" is more pronounced than a women's. Or so I have been told, and with the very few female impersonators I have met over the years, it is a tell tale sign. :confused2:
:arrogant: MR. Anonymous Posts :nono:

I dont get the appeal of Lady Gaga. Shes just weird.
"I suppose its better than to be a master of 7 than to be vaguely familiar with 14." - Chick Evans
Whats in my

Style over substance IMO. If the music sucks, then the rest is of no interest to me.

What's not to like?
She isn't the best singer around, but the pop music industry has never been about the quality of the singing, really. It's more about the performance, imho. And Lady Gaga is a very good performer.

Working on the swing

With her, I like some of her music. And at first the "no pants" thing was interesting. Then I'll see her in some bizarre getup for an awards show and it just makes me go WTF?! She sings better than a lot of the people I hear on the radio anymore - but that's not saying a lot either.

I haven't heard the hermaphrodite bit, but do know that she's openly bisexual and supports gay rights. She performed and spoke at the Gay Rights rally in DC in October.
What's In The

* Won via contest, thank you TaylorMade & THP! * Courtesy of THP

I've heard the story, but I'm calling bs for now.
At least until I'm proven wrong.

She's making her money off an act, but I think there's a voice there. The jazzy thing she did on SNL at the end showed that. I could see her do an album of standards, a torch singer thing, and people would be really surprised. She's interesting to me. She was good in the skits she was in, too. Next week Taylor Swift is doing double duty on SNL as host and musical guest. While she's adorable, in no way does she have Lady Gaga's voice.

Can you tell I have a twelve year old daughter? If I didn't, I most likely wouldn't know these girls existed. I have never heard of a lot of the bands and singers people talk about in the "what are you listening to" thread. Mainly because they aren't mainstream, and twelve year olds have no interest.

Taylor swift is a much bigger hit,but neither one have a voice to gawk over.There is no range with their voices.It all sounds the same.
Our attitude and how we think has a tremendous effect on how we play and score

BigLeftyinAZ said:
Taylor swift is a much bigger hit,but neither one have a voice to gawk over.There is no range with their voices.It all sounds the same.
Click to expand...

That's why I suggested listening to Lady Gaga during her last SNL song. I would guess Lady Gaga is outselling Taylor Swift, though I could be wrong. They're both selling a ton of music. Lady Gaga has five hit singles, though granted they are not very good. But I'm not talking about the quality of the songs.

First day sales of “Fearless” totalled 217,000,[21] with sales of 592,304 copies sold in the first week, 129,000 of them being digital downloads, the fourth biggest-week since Nielsen SoundScan began tracking them in 2004.[22] The album debuted at number-one on the U.S. Billboard 200, U.S. Billboard Top Country Albums, Canadian Albums Chart, and Canadian Top Country Albums Chart. In its second week of release, the album dropped to number four. In the fifth week, The album made its ascent back to the number-one spot, where it stayed for the next seven weeks for a total of eight non-consecutive weeks at number-one, making it the longest-running album among the releases that topped the chart in 2008 and the first album by a female artist in country music history to log eight weeks at number-one on the Billboard 200.[7] It dropped to number two in its twelfth week, and in the next week it dropped further to number four, although it was the greatest gainer. In its 14th week, the album reclaimed the number-one position, spending a total of eleven weeks, the most weeks at the top since Santana's Supernatural remained atop the chart for twelve weeks. In its 15th week, it was bumped to the number two position by U2's No Line on the Horizon.[23][24][25] Fearless is the fifth longest-running number-one album by a female artist in the Billboard 200 history.[26] In addition she is the only singer to have achieved the longest-running album as a country female recording act in the Billboard 200 history.[27] The album has spent 41 weeks in the top ten on the Billboard 200, becoming the longest run for a country album in the top ten since Shania Twain's Come On Over, which had 53 weeks from 1997-1999.[28]

On July 3, 2009, it was announced by Yahoo! Music that Fearless was the top-selling album of the first half of 2009 in the United States.[29] In New Zealand, the album debuted at number two on March 16, 2009, jumping to number one the following week. The album was certified Gold after four weeks on the chart, selling over 7,500 copies. The album was then certified Platinum after seventeen weeks, selling over 15,000 copies.[30] In Australia, the album has been certified Platinum. In the United Kingdom, the album debuted strongly at number 5 and is currently placed strongly at number 11, so far spending ten consecutive weeks in the top 20. Whilst being interviewed on The Paul O'Grady Show in May 2009, she was presented with a Gold disc for sales of over 200,000 in the United Kingdom. According to Billboard, Fearless has sold 4,031,000 copies as of October 28, 2009[31]. On September 8, 2009, it was announced that Swift's total U.S. album sales had surpassed 10 million copies. [32].

In the United States, The Fame debuted at number seventeen on the Billboard 200 with sales of 24,000 on the issue dated November 15, 2008.[29] After fluctuating down the charts, the album reached number ten on the issue dated March 7, 2009.[30] It reached a peak of number four on the chart.[31] The album also topped Billboard Top Electronic Albums chart. It has been number one for twenty-five non-consecutive weeks.[32] On May 7, 2009, the album was certified platinum for shipments of one million copies, by the Recording Industry Association of America.[33] The Fame has sold over 1,441,000 copies in the United States.[34] In Canada, the album has peaked at number one.[35] The album has been certified three times platinum, by the Canadian Recording Industry Association for shipment of 240,000 copies.
Our attitude and how we think has a tremendous effect on how we play and score

Looks like taylor is kicking her arse in sales.

BTW,I'm not a fan of either one,so no favoritism here.

I also hear M jackson owned a ton of lady Gaga's music?
Our attitude and how we think has a tremendous effect on how we play and score

She's interesting because she's different. She's fun and there's a niche which she's obviously filling. Like any other artist, she'll have her fans and her knockers (no pun intended:wink. Thankfully we are all different with varied tastes. Good luck to her, she'll milk it while it lasts I'm sure.

Like I said, I could be wrong. Seems Taylor Swift has made a few bucks. She's cute, too, albeit in need of some pizza or a few sandwiches. Did you know that Joe Jonas broke up with her via a text message? Did you know that she wrote "Forever and Always" about Joe and their break up?

Do you think Nick and Miley are more than friends? Can Selena Gomez be a big pop star? Are Rob and Kristen really in love, or is their relationship fabricated to increase the popularity of the "Twilight" movies?

These are the pressing issues I deal with as father of a pre-teen girl golfer.

BigLeftyinAZ said:
Looks like taylor is kicking her arse in sales.

BTW,I'm not a fan of either one,so no favoritism here.

I believe she's hooked up with Gwen Stefani and Akon in some manner, but I wouldn't bet my life on it.