Based on DD's thread about artists, and the fact there has been a little chatter about music lately, I was wondering if there are any musicians out there. I played guitar for several bands since the 90's. Mostly NYC hardcore style stuff then it progressed to a hip hop hardcore style and the last band I was in a few years ago was pretty much a punk/alternative style.

There was one for my most recent band Backside Slappy but I think it went away from lack of being updated.

Good stuff Craig, listening to it now!
I like the B Slide name, cool. A good band name can make or break a band. I'm currently with Gypsy Shake.
I miss out on myspace because of my profession, just nice wise to put anything on there.
I've done it all it seems, anymore I have no drive to write anything and just play what I want to, mostly Blues. Desire comes and goes, but my day in the sun is behind me I fear, though I am teaching 46 students at school right now, maybe one of them will make it and sing me on as a guitar tech!

I wish I learned to play the piano when I was younger. I love the eletric organ especially on some jam bands or Pink Floyd concert DVD's
What's In the... The Country Club - Sun Mountain Mini

i've been drumming for over 7 and a half years now. i love playing my instruments.
in the beaten up titleist bag:

i've been playing guitar for about 4 or 5 years now. mostly post hardcore and hardcore over the past year or so. i dont have a band of my own, but i fill in a lot for a few of my friends bands when somebody can't make it cuz we all play similar or the same music. i love playing shows and stuff. its a lot of fun. if i really dedicated myself to it and found a good band, i could probably do something with it. my brother is the rockstar though. he is 13 and he is already doing some session work and playing with some well known bands in the area. a lot of people at the music store we take lessons from consider him somewhat of a prodigy
In the

and he's only thirteen!!
he'll probably be the next hendrix.
in the beaten up titleist bag:

oh. i guess then!
in the beaten up titleist bag:

I've played the guitar for about 12 years now. Never in a serious band. Mostly just jam with friends. I play a little of everything...punk, metal, improvised jam-band kinda stuff. I also am a huge electronic music fan and I produce ambient, down tempo and progressive house as well.
In the

and he's only thirteen!!
he'll probably be the next hendrix.
Click to expand...

"I used to be a diehard Titleist man, but the only way youd get my Mizunos away from me is to pry them from my cold, dead hands."- Bakemono

ive played the drums since i was 10 years old (Im 40 now). i currently have 2 sets (one acoustic and one electric). i played in a couple bands when i was in my early 20's, but they were just for fun. since im moving into a condo im selling my acoustic set though, so now i will only have the electric set. but that thing is so fun to play its ridiculous
My Old Bag:

I Play guitar and have for the last 10 years or so. Never played in a band but play a lot of older punkish stuff Dead milkmen, sex pistols, rancid, the cure so on.

As of this past Christmas, I've been playing for 22 years (guitar, as in the avatar). I played in a couple of different bands in college, up to 2 - 3 nights/week. When I got out of school, I made a couple starts at putting bands together but it just never panned out. Florida did two things that I don't disagree with but for all intents and purposes killed live music in the area I lived in. First, they started cracking down on drinking and driving hard. I don't disagree with this, but the level that they did it at had lots of folks afraid to even have a single beer before heading home. Second, they banned smoking in any establishment that served food. A lot of the big fans of live music happen to smoke. So bars were either forced to give up all food sales or tell their customers to smoke outside.

More recently I've come to the conclusion that my current career choice is just incompatible with playing in a band. I'm up every morning at 4:30 for work, and I tend to work some long hours on occasion. Not very conducive to practice, much less gigging. I can't do the 2 hours of sleep before work anymore - too hard to be effective the next day.
My uncle has a country place...that no one knows about...
A bunch of stuff the manufacturers would rather I wasn't seen with:

I fiddle around on my Epi SG guitar. nothin special just like to be able to play enough riffs to make it look like i know what im doing. haha
MARARARARAR

I played guitar for 5 years, did not really find an interest in it after taking lessons for 4 or 5 years. I think I would have been better off had I self taught myself. I just am not very good because I put no time into it, I never practised at all, and practising it for me was like a chore.

I'm thinking about taking up piano. No prior training in it and wondering if anyone could give me some advice.
MARARARARAR

TCCcaddie said:
I'm thinking about taking up piano. No prior training in it and wondering if anyone could give me some advice.
Click to expand...

Go for it, although I'm afraid that's as big a request as asking for some advice in golf. I took lessons once upon a time and although I never pursued it to greatness, it's been helpful to learn how to read basic sheet music, rhythms and notes both.

I've been fooling around on this all day today.
http://www.bgfl.org/bgfl/custom/resources_ftp/client_ftp/ks2/music/piano/index.htm

With what i know from guitar ive learned some piano melodies from ear and have gotten some down good. I want to get back to work soon because after i get a new shaft for my driver a piano is next on my purchase list.
MARARARARAR

Craig Mac said:
Based on DD's thread about artists, and the fact there has been a little chatter about music lately, I was wondering if there are any musicians out there. I played guitar for several bands since the 90's. Mostly NYC hardcore style stuff then it progressed to a hip hop hardcore style and the last band I was in a few years ago was pretty much a punk/alternative style.

There was one for my most recent band Backside Slappy but I think it went away from lack of being updated.
Click to expand...

I play guitar. Blues guitar. Never in a band but have had some great jam sessions with friends. I live in the pentatonic box. Good blues and classic rock live in the box. Here's a picture of my stable... 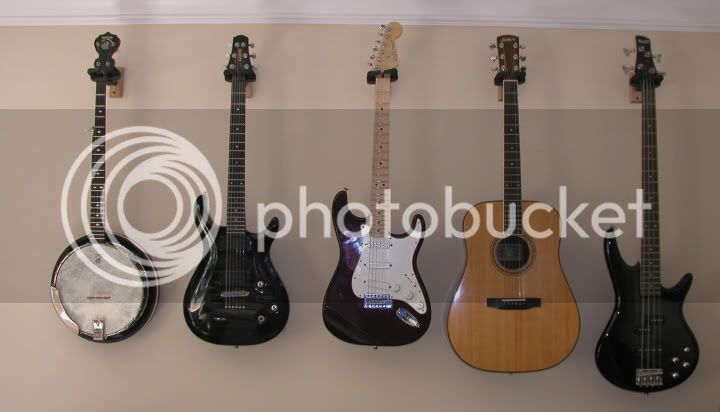 I just want to play some country, jazz, blues and bluegrass. A buddy of mine, who's a freakin genius with the guitar gave me a nice Takamine acoustic, and promised to teach me to play, but he signed on with a band and has been on tour for 5 years now (I've seen him once since)

I tried learning off the internet, but I seem to have either found some crummy sites, or I just suck something awful.

It's out of tune now, my daughter was fascinated with the tuning knobs, and I don't know how to tune it (I got it close following directions, but it's still not quite right)


I played trumpet as a teen, and loved playing jazz. I would have pursued it further, but I had a bit of a falling out with the high school music director as to the direction of my playing career (he wanted me to march, I HATE marching music) so I quit and haven't played since college when I'd go to jam sessions with some of the students. We drank beer, smoked a lot and played a ton of improv stuff. Sessions would often last until dawn.
I like to think of myself as a student of the game... it's just too bad that I'm in special ed.
(\__/)
(='.'=)
(")_(")
In my

get you a Korg GA-30 Guitar Tuner. Only 15 bucks and it works great. My ex girlfriend had a Tak nylon string. Those are sweet guitars for the money
Last edited: Jun 30, 2009
Don

Hey Diane! You need to get you one of these and rock on girl!

Been playing the guitar for 10+ years, played in the 60's, took it back up about 11 years ago. I am now going to learn the mandolin, got one coming Tuesday.