Late 2006 I bought a set of Mizuno MX 25 irons, 4-GW. Loved the feel and results with them till 2011, then bought some new irons. The MX 25 irons went into the spare bag and I kept them till 2015 when I gave them to a friend that loves the game but was playing with a store bought set of lousy irons. He was amazed with the feel and results using the MX 25 irons compared to the club he had been playing with. I was at his house 2 weeks ago to cheer him up after he had his right knee replaced. Went into the garage to look at my old MX 25's and fell in love with them again. When I got home I went to eBay and found a set of MX-25 4-GW irons with True Temper Dynamic Gold SL shafts and received them last week. Played one round with them already and they sure do feel good swinging and at impact. They are shorter and have more loft, by 3 degrees per club, than my gamers, AMP Cell w regular graphite shaft. After the 5th hole I found the address position for them and smated them smartly the rest of the round. They won't replace my gamers, but it sure is good to see how well they still play. Not bad tech for 11 year old club design. 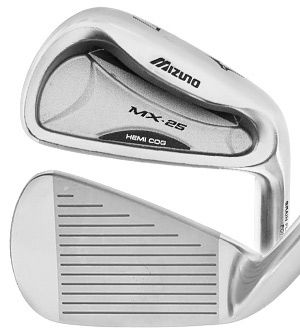 I played the regular steel shafted Mizuno MX 25 irons above for a short while, but then moved on to a current set of irons....or maybe 4 to 5 different sets of irons.

Last week I found another set of used Mizuno MX 25 irons, 5 - PW, but with the Mizuno Exsar IS2 regular graphite shafts. I've tried to find the shaft specs on the Exsar IS2 graphite shafts without any luck. The irons arrived with old, but not worn too bad, golf pride tour velvet grips that feel too small diameter. I figured to go to the driving range today and hit them to see the results with the skinny grips and Exsar IS2 regular graphite shafts. I had forgotten just how absolutely PURE the impact feel was with these 18 year old designed forged irons. I bought a set, 4 - PW, back in 2002 and played them for 6 years.

I'm not going to change the grips till after Mondays round, but I can't wait to hit them again with chrome soft balls instead of the lousy driving range balls today. The Exsar IS2 graphite shafts performed great at the driving range, nice high ball flight, and straight too. I have to say also, the distance with each iron seeed comparable to my current gamer irons, Cleveland Launcher CBX irons with Miyazaki C Kua senior flex graphite shafts. I took three MX 25 irons to Golf Galaxy yesterday and had the old school lofts bent stronger to the same lofts as the CBX irons.

good for you. and if you don't mind, i will be adding the phrase "smated them smartly" to my linguistic repertoire

Art M said:
good for you. and if you don't mind, i will be adding the phrase "smated them smartly" to my linguistic repertoire
Click to expand...

Irons have not had near the evolution that woods have had, especially in the forged category. I think distance is overrated in irons anyway, distance control is really what you want.