This is a press release

SrixonÂ® Sports, a world leader in golf club and golf ball technology, is pleased to introduce their latest product introductions for 2009, which includes the new SrixonÂ® Z-TX driver, fairway woods, and irons, as well as the latest SrixonÂ® hybrid.

SrixonÂ® Z-TX Driver
This latest high performance driver from SrixonÂ® was designed to provide longer distance with increased accuracy for competitive golfers worldwide. The Z-TX driver features Starburst variable face technology, which enlarges the driverâ€™s C.O.R. by 5%, providing added distance, consistency and forgiveness, as well as decreased power loss on off-center hits. The larger sweetspot allows mis-hits to benefit from a higher trampoline effect which leads to increased ballspeed and added distance. The Z-TX driver is made with a new low-density, highly-elastic, rolled titanium face-material called Super Ti-X51. This latest light-gravity material, when combined with the driverâ€™s Starburst variable face design, gives the Z-TX driver the largest and most responsive sweetspot that SrixonÂ® has ever brought to market. The Z-TX driverâ€™s clubhead body is also made with a proprietary low density titanium, which, when combined with its TWIN CAM sole design, has allowed for the redistribution of 11 grams of clubhead weight out to the extreme perimeter of the clubhead for increased M.O.I. The 6 part bulge and roll, located on the driverâ€™s clubface, helps reduce side spin and increase launch angles leading to better controlled mis-hits. The Z-TX driverâ€™s 460cc shape profile was inspired by Srixonâ€™s professional tour staff, while the straight top-line shape allows for better alignment and added consistency on every shot. Available in lofts of 8.5Â°, 9.5Â° and 10.5Â°, the SrixonÂ® Z-TX driver will carry a MAP price of $499 and will begin shipping immediately.


SrixonÂ® Hybrid
This latest SrixonÂ® hybrid boasts a Custom 450 Maraging steel face with Starburst variable face technology. Its variable face technology not only helps generate higher ball speed and increased distance but has allowed for the redistribution of clubhead weight toward the extreme perimeter of the clubhead for increased M.O.I. Heel and toe Tungsten sole weights have been strategically positioned to place added weight lower and deeper in the clubhead for increased stability. The placement of 9 grams of weight in the sole and 6 grams of weight in the heel help center the weight distribution allowing for added workability. Available in lofts of 16Â°, 19Â° and 22Â°, the new SrixonÂ® Hybrid will carry a MAP price of $199 and will begin shipping immediately.

SrixonÂ® Z-TX Irons
Designed for the low to mid-handicapper, these new SrixonÂ® Z-TX irons are premium forged irons with a slight cavity-back design, which offer added playability and increased accuracy without having to sacrifice on forgiveness. Forged from 1025 soft stainless steel, their proprietary heat treatment and lush chrome finish help give the Z-TX irons a soft, yet responsive feel for greater control and predictability on every shot. Five grams of Tungsten weighting positioned on the heel and toe of their sole offers increased MOI for added stability at impact, while their lower and deeper CG helps promote a higher ball flight. The Z-TX ironsâ€™ stepped sole design allows the longer blade to play like a shorter blade, while also making the irons more versatile in tough turf conditions. The Z-TX ironsâ€™ thinner face-center has expanded their sweetspot by 20%, making them not only one of the longest irons on the market, but also one of the most forgiving. The Srixon Z-TX irons will carry a MAP price of $899 and will begin shipping immediately.
In my Bag Boy Hybrid

Here's a pic .Looks like some great stuff to try

Here is the thread from our unboxing of the irons.
Srixon ZTX Forged Irons Unboxing - The Hackers Paradise 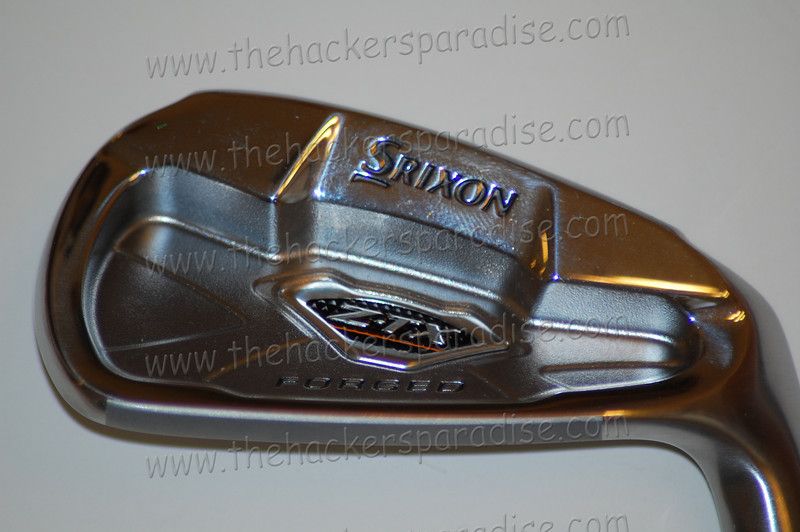 In my Bag Boy Hybrid

I think they look nice....
Topline is appealing to someone like me with the Ping G5 Shovels....

As for the photography.....when I do shots for Ebay or anything else, I always put my clubs on a white sheet and do not use a flash....Of course this means I have to use a tripod, but the end picture is much more realistic in its color than the wash out a flash can give....