I can still remember my reaction the first time I saw the original Spider putter from TaylorMade Golf. I thought it looked like a spaceship on the end of a putter shaft. It was radical looking and it was big. I demoed the putter a bit here and there, but I never wound up falling in love with it. The original Spider putter would go on to become a huge hit for TaylorMade. It was such a popular putter that the company decided to ‘ghost’ it last year. Since then, the Ghost Spider has become a rock star in TaylorMade’s lineup full of great putters. Never a company to rest their laurels, TaylorMade set out to redesign a putter that so many people already loved.

Extensive Tour testing influenced every detail of the new Ghost Spider S – one of the most stable putters TaylorMade has ever created. In addition to its new, tour-inspired shape, the Ghost Spider S is revolutionary in terms of control and feel.

“To create it, we started with the DNA of our most successful putter franchise and applied more than a year of obsessive feedback from our toughest customers, our Tour Staff professionals. In terms of the two most critical aspects of putting — alignment and stability — Ghost Spider S is the complete package.” Michael Fox, TaylorMade’s Product Line Manager for Putters and Wedges.

Looks and feel are very subjective characteristics of a golf club, particularly a putter. Having said that, I think the new look of the Ghost Spider S is outstanding. There are no more distracting curves and lines when you’re standing over this putter. Instead, you have the contrast of the white frame and a newly designed black crown with a single white alignment line. This contrast helps make the Ghost Spider S one of the easiest putters to align that I’ve ever used. The sole of the Ghost Spider S is similar to the original Ghost Spider, but instead of the black spider web graphic, the S features a red sole with a Ghost Spider S badge in the middle. The Ghost Spider S also has a great looking and feeling grip in red, black and white that really ties the overall package together. A putter this cool looking has to come with a slick head cover and that is just what you get here. Primarily white, the spider web and spider graphics of the head cover really make for a nice looking and very easy to use head cover.

One word that I’d use to describe the feel of the Ghost Spider S would be smooth. In fact, TaylorMade could tell me right now that the S stands for smooth and I’d have to believe it 100%. Whether you agree with the shape of the putter or not, you simply can’t deny that this thing just gives back an amazingly soft and smooth feel when you stroke a golf ball. The Pure Roll insert is back, but this one is different to me. I’ve tried multiple Ghost putters with the Pure Roll insert, and while I have always liked the roll of the golf ball, I haven’t always loved the feel off the face. I was expecting something similar this time around, but I was pleasantly surprised the second I rolled my first putt. The audible sound is almost nonexistent and the feel you get is equally soft. In my opinion, smooth perfectly describes both the feel and the sound of the Ghost Spider S putter. 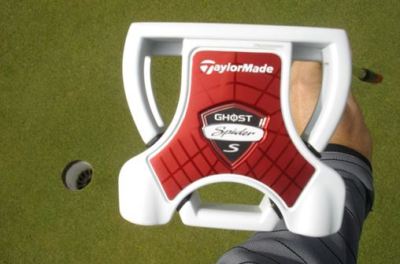 MOI is something that seems to be talked about more with drivers than it does putters, but to me, MOI is more important on the greens than anywhere else on the golf course. On the putting surface, a fraction of an inch can cost you precious strokes and can be the difference between a one-putt birdie and a three-putt bogey. The Ghost Spider S delivers an amazingly high MOI measurement of 6,030 according to TaylorMade. That number is dramatically higher than previous mallets such as the Ghost Manta (4,900) and Corza Ghost (3,830). I found that the Ghost Spider S was not only incredibly easy to align, but I also felt like I hit my targets more consistently the more I used the putter in my testing.

Prior to testing the Ghost Spider S, I was using a blade-style putter. I’ve been a mallet guy most of my golfing life, but recently decided to make the switch to a blade. I didn’t make the switch because I rolled mallets poorly, but because I just like the looks of a blade putter better. One thing that really took me by surprise was just how little effort it took to get the golf ball to the hole with the Spider S. Even on long putts, I didn’t have to take a big swipe at the ball to get it to the hole. That, in addition to the forgiveness I got from this putter, makes me wonder why I would even think of going back to a blade when this review is over. 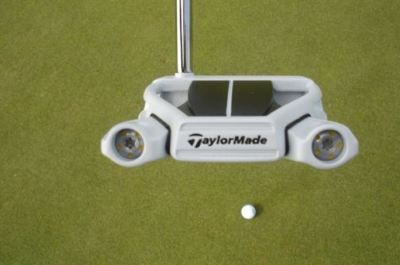 The more I rolled putts with the Spider S, the more I really started to love the overall feel of it. By that, I mean the feeling of confidence and the sense that I was going to put a good roll on the ball. That really freed me up and allowed me to pick my line and confidently roll the ball. My putts-per-round stats haven’t immediately dropped down to Tour Pro level, but I do believe that putting this in the bag has made me a better putter and that will ultimately give way to lower scores.

The model of the Ghost Spider S that I tested was equipped with the standard hosel. The putter will also be available with a Tour-inspired “short slant” hosel, which is designed for the player who has an arced putting stroke. Unlike the standard hosel, which promotes a straight-back straight thru swing path, the short-slant is toe-weighted and broadens the scope of players who can benefit from the performance characteristics of the Ghost Spider S.

“Performance Mallet putter use on the PGA Tour has grown during the past decade to where, today, more than 30% of PGA Tour pros use a mallet,” added Fox. “We’re confident that Tour pros and amateurs who favor a mallet will want to explore Ghost Spider S because the performance benefits are impossible to ignore.”

I’m a firm believer in the saying “the proof is in the pudding”, or in this case, the proof is in the putting. In just its second official week on the PGA Tour at the Wyndham Championship, the Ghost Spider S was already the number one overall putter in play with six. The looks are great, the feel is great, and the performance certainly backs up both extremely well. I haven’t always been the biggest fan of putters with an insert, but with the feel and the roll I got from the Pure Roll in the Ghost Spider S, I definitely believe that this putter could find a permanent spot in my bag.

As I mentioned earlier, the word smooth just keeps resonating in my mind with the Spider S. The multi-material head (aluminum and steel) has such a nice overall feel to it. Hitting my line with this putter is very easy and that equates to holing more putts. The few short weeks the Ghost Spider S has been in my bag have definitely been fun. It took a while to get used to the shape and the size, but the more I did, the more the putts started to drop.

The Ghost Spider S standard model is available on November, 1, 2012 for $179 in standard length and $199 in a belly model. The Ghost Spider S featuring the “short slant” hosel will hit the market a month later, on December 1, 2012.