The Honma Tour World 737 iron series is something to behold.  Unique in more than just their build process, they have provided golfers with a slightly more finite than usual way of making the iron accommodate their particular nuances and preferences.  On the surface it might seem like overkill, but Honma has provided subtle changes to the TW737 on three heads, the Vn, V, and VS.  Once a golfer has decided the profile suits them, they have an opportunity to select between these three marginally different heads to get exactly what they want.  Sounds fantastic, right? 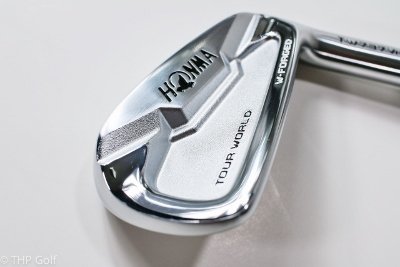 For the purpose of this review, the TW737Vn irons were photographed and tested extensively.  Honma took an interesting approach with the finish of the irons, combining a mix of brushed, buffed, and rough to draw the sleek lines of the iron head together.  This provides that traditional shiny player iron look when reviewing them up close and in the bag, while avoiding some of the frustrations of glare on the golf course.  The cavity portion of the TW737Vn is also quite limited, providing that sleek look while presenting the opportunity for a touch of weight allocation, which will ultimately maximize the potential of the head at this profile.

One aspect of the cavity that was appreciated early on and carried through the testing, was the isolation of material in the central location of the head.  While sending weight to the perimeter can certainly improve the potential on poorer strikes, taking too much away from the central location seems to have an adverse result on the quality of sound on contact.  Fortunately, Honma left a great deal of material in that location, and golfers are presented with a truly rich response on well struck shots. 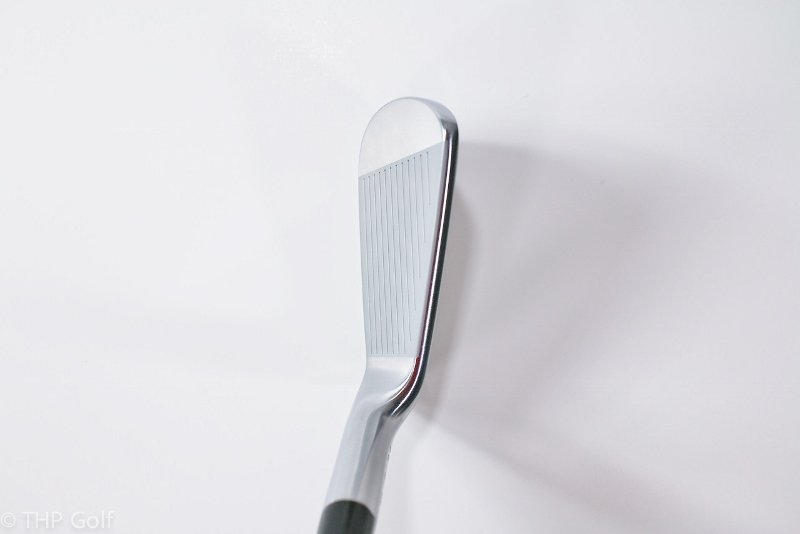 On the top line, golfers are treated with an attractive player profile, with sleek narrow top lines, peaking in a slightly sharper top toe section and blending down into the toe.  The hosel width is on line with typical shaping, but does extend further upwards into the shaft connection in comparison to some other player cavity backs.  The slightly brushed heel and toe portions of the face contrast well with the groove section, allowing for a clean frame of the golf ball at address.

The TW737Vn irons have what Honma calls “V 3 Series Unified Face Progression.”  Essentially, slight alterations to head design and loft to allow for a more granular approach to fitting.  Rather than trying to explain them specifically, here is a graph that represents the changes between the three heads; 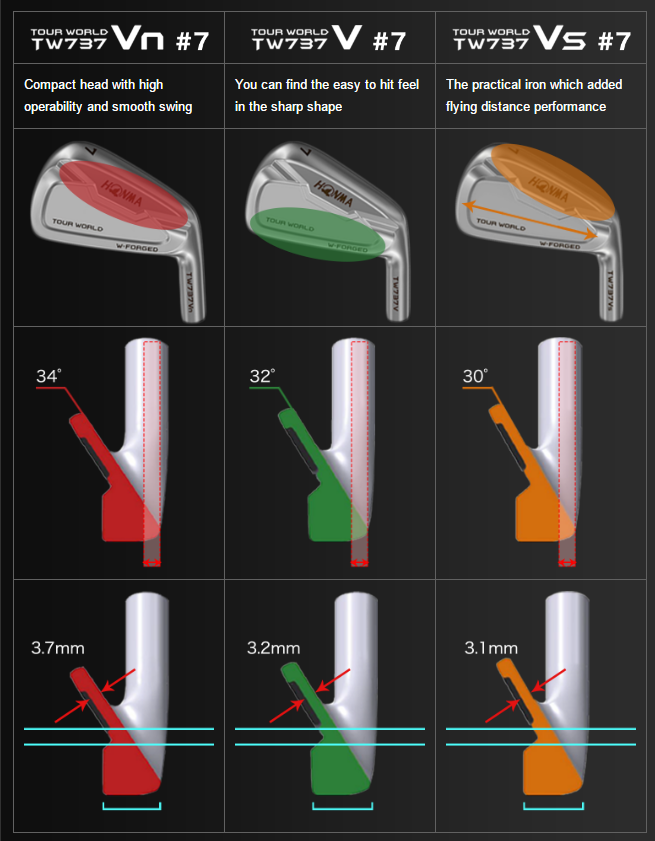 As you can see, there are changes in loft, depth of the face, and width of the head present.  Being the weakest of the three lofted irons, it should not surprise anyone that the TW737Vn irons promoted some higher ball flight, especially being paired with the DG AMT steel shafts.  Despite presenting like a compact player shape, the length of the head heel to toe is actually quite reasonable, opening the door to some flexibility in contact deviance from center.  In many cases this slightly wider profile could increase the confidence over a traditional, small bladed iron.

One of the most subtle design elements of the Honma TW737Vn irons is the understated rolled leading edge.  While hard to perceive when looking at the sole of the club, mat based testing showed a small ridge leading the contact area, taking on much of the green shavings of the mat, while the rest of the sole had a lighter green hue to it.  This could be very telling for turf interaction, and during testing, the irons never seemed to be overly aggressive when producing divots.  This subtle profile makes a difference when talking about the small elements of forgiveness that surround this head. 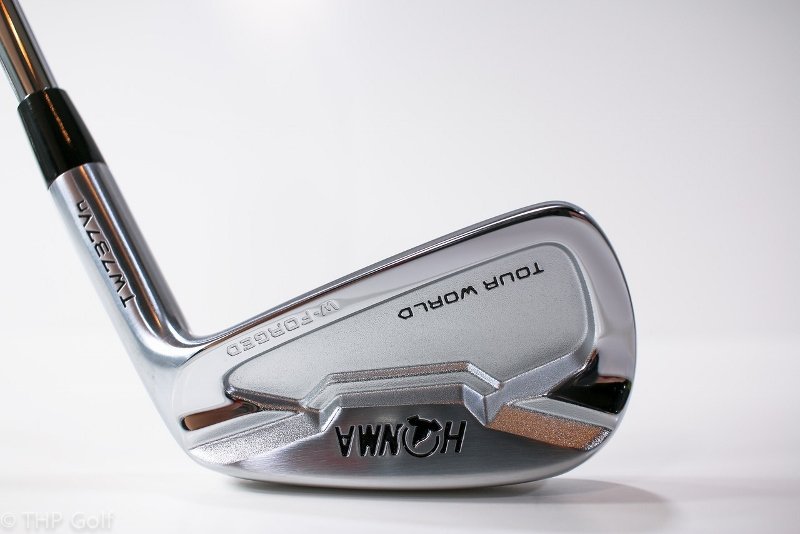 A secondary highlight from Honma is their new “W” forging process, which includes a cold and a hot forge that creates a much denser concentration of metal.  This grain flow density is most predominant in the central upper portion of the face (where we all try to hit the ball) and spans outwards from there, being slightly less dense towards the toe and heel.  This fascinating process certainly lived up to the hype during testing.

Golfers who hit the TW737Vn well could not take their focus away from the quality of the strike, especially as it relates to sound.  While some golfers equated to a rich, complete sound, others suggested it sound/felt like almost nothing at all.  It was as though the head was hitting nothing (in a very good way).  In many cases, an iron of this design needs to reflect the quality of the strike and award the golfer with a positive sensation on center-face contact, and the Honma TW737Vn provide that much in a very effective way. 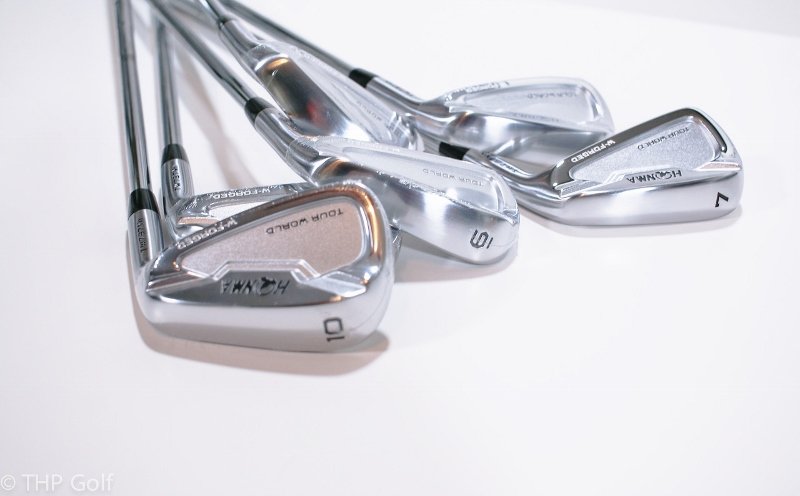 Strikes off center, naturally, leave much to be desired.  With limited material in the heel and toe portions lower on the head, making subpar contact provided very responsive feedback to the hands and ears.  It is a notable departure from center face contact, but this type of iron should leave golfers anticipating only marginal increases in forgiveness as compared to a traditional blade shape.  It is the combination of the compact cavity, subtle leading edge roll, and weight positioning that set the Honma TW737Vn irons apart from others of a similar head shape.

For stronger players who are seeking a compact iron package with excellent feedback and small elements of forgiveness, the Honma TW737Vn irons are worthy of a spot atop the ponder list.  With a new forging process and the hot/cold forge, they are bound to have a sound and responsiveness unique to their own, with consistencies in dense grain flow forging to promote potentially more accurate, better shots.  For more information on the Honma TW737Vn irons, visit http://www.honmagolf.co.jp/en/.