Within the golf industry, there may not be a sector that is as dominated by such a small number of brands like golf balls are. It can also be argued that there may not be a sector that has changed the game as much either. Those two things always make it interesting when a company comes along with an idea and tries to jump in and make their mark. It is typically a mixed bag of results when someone without the financial backing of the major “players” presents an idea that they truly believe can change the way people think about equipment. One such company is “I Need the Ball”, and their quest is to blend distance with greenside accuracy to create a quality all-around performer from tee to green.

I Need the Ball – From the Company About “The Ball”

The Ball is brought to you by three high school buddies who wanted to bring something new to the world of golf. We created a three-piece ball with a tungsten core. It’s the only one on the market, so you’ll have to peg it up yourself to see how it performs. This thing really rips.

We made the Ball for people like you who, like us, are looking for a competitive advantage to blow past your buddies on the links. A day on the course is that much more enjoyable with the Ball, whether it’s spinning it back to within three feet or hitting your 5-iron 210.

These aren’t our dad’s balls, they’re ours.

The only 3pc cast urethane ball with tungsten core technology on the market today. The ball combines the makeup of a high-performance ball with the core of a distance ball.

The most noticeable thing about “The Ball” is the branding itself. There are no numbers on these golf balls, rather, the company has chosen to go with an alignment arrow and a logo in a different color for each sleeve within a box. There will undoubtedly be mixed emotions on this but the fact is smaller companies have to find ways to stand out and “The Ball” certainly does that. The logo itself has some pretty interesting ties to chemistry that make it even more unique. At the center of the logo is a “W”, the atomic symbol for Tungsten, which is used in the core of the golf ball. Additionally, the outside of the logo is a snake eating its own tail, a reference to German chemist Friedrich August Kekulé’s “Benzene Dream”, in which he dreamt the atoms aligned themselves to look like a snake eating its own tail. Obviously, not something that everyone is going to get, but incredibly clever in reference to the science that went into developing this golf ball. 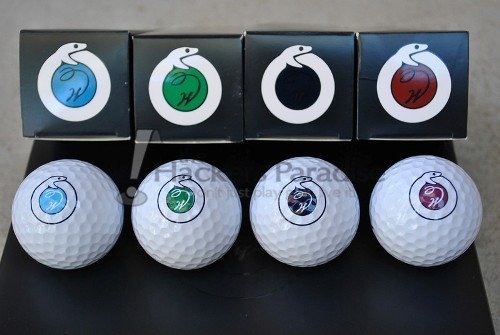 Beyond the logo, the ball itself features a urethane cover and a 318 round dimple design. If one did not know these balls were from a smaller company they would never be able to guess by the quality in hand. The cover lacks any imperfections and there is also not a noticeable seam on the. All in all, when up close and in hand the quality stands out on its own. 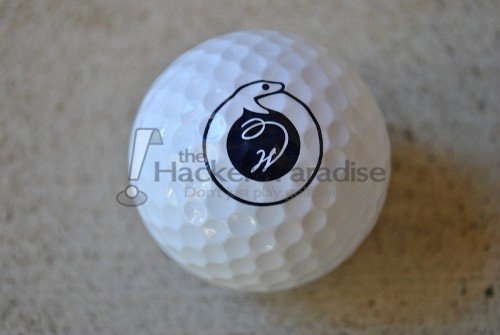 Clearly the most important thing about a golf ball is the performance than it gives the golfer on the course. Naturally, results will vary as it pertains to distance from user to user, as we all have different swings and swing speeds. With “The Ball” the companies goal was to design a ball that could be played by many levels and give the different traits that many seek in one package. 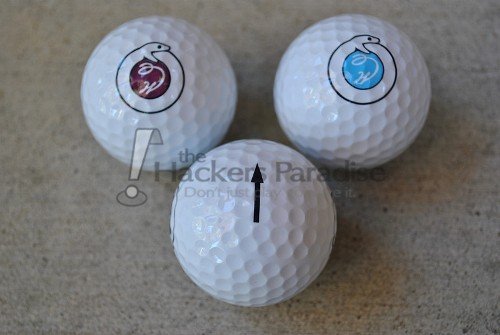 Obviously the big push here with “The Ball” is the use of tungsten within the core. Although this is not the first ball to use tungsten to try and improve distance, it is the first one to combine it into a three-piece package in an effort to produce a ball with distance and greenside capabilities. According to the company, the key with the tungsten being used within the makeup of the core is that it allows for a better overall compression, which should produce the best launch numbers and distance. According to the company, when the tungsten core combined with the Ionomer blended mantle layer they achieved a ball that can produce lower spin off the tee than some of the other major 3-piece golf balls on the market. They then added a urethane cover and some spin was regained where most golfers need it, around the green. Everything sounds good on paper, but what it comes down to is performance.

During testing off the tee (driver, fairway wood, hybrid, and irons) “The Ball” proved to be a solid performer time and time again. Although it was not longer than most golf balls that it was put against, it also was not shorter and this should very much be considered a good thing, even with the claims of additional distance off the tee. The fact is golf balls will fit swings differently and result in varied performance from a distance standpoint the majority of the time. For “The Ball” the similar distance seen very much makes it a contender with many of the major balls on the market. Additionally, spin off the tee was in a very comfortable range and did not accentuate misses like some urethane coated balls can tend to do.

Off of the long irons, short irons, and wedges into the green “The Ball” performed as one would expect a urethane golf ball to. The golf balls produced the necessary spin to pull off the shot required depending on the situation. From a full release to a hop and stop and even getting some shots to dance a bit with the higher lofted clubs, it responded quite well. One additional note is that the ball gave off a bit of a higher pitched (more clicky) sound than several that it was hit side by side with. This fact is likely a compression factor in coordination with the core being a different material than we typically have seen. That said, even though it was a bit different sound, it was in no way, shape or form what could be considered harsh or plastic like. It is just different than what many may be used to. Much like with the driver, the performance here is not necessarily better than other competitors, but it also does not lag behind, which should definitely be considered a good thing.

The way a golf ball performs on the green obviously is not in relation to its distance, but rather the overall feel off of the putter. Despite having a higher pitch off of the irons, on the green “The Ball” provides a plush feel off of both inserts and milled faces. The lack of harshness off the putter face is likely another benefit of the urethane cover.

All told, “The Ball” may get indifferent initial glances because of the packaging/branding or the fact that it is such a small company of friends that have designed it, but the quality really speaks for itself. At a cost of $34.00 per dozen for a three-piece urethane golf ball, “The Ball” stands up well against other bigger named golf balls on the market. Although it may not be exponentially better than similar 3-piece golf balls on the market it also does not fall behind in any particular category. In fact, this is a golf ball that provides solid all-around performance and when combined with a solid price-point it certainly comes down to exposure and making the product more accessible to the masses to try out for their specific games.

For more information, be sure to check out www.ineedtheball.com.