Over the years, putter designs have continued to evolve and change. Sometimes these new takes on designs are relatively small, but other times there are significant departures from what is considered the “norm”. With the L2 Traditional putter, Lateral Line is definitely pushing the boundaries of what we know about putters and how they are “supposed” to look. 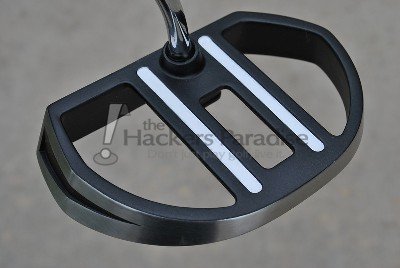 Breaking into the golf market is a difficult task for the small business. We have always believed that a great idea, followed by a quality product, at a reasonable price, can accomplish this. We have also understood that a passion for our goals that is founded in patient enthusiasm, will not be denied. It is because of these beliefs that LATERAL LINE LLC. is reaching a level of technology and popularity, in the field of golf and specifically on the putting green, that is causing golfers to “try something different”.

Our company was founded in 2007 and has been growing ever since. It began with the notion that facing the hole to putt a ball made the most sense, but in order to be successful with this idea would require a putter designed to do more of the work than previous putters have been able to do.  With the help of skilled computer graphics designers headed by Don Lee, a Pittsburg native and well known Graphics designer, we were able to create the L2 head design that maximizes what would be viewed as an abnormal head weight.

The L2 Traditional putter has a lot going on in a unique package when compared to what golfers are accustomed to seeing in putters. Lateral Line boasts that the L2 is 30% higher MOI than the next highest rated putter, which given the size and innate design of the putter is not all that surprising. What a higher MOI in a putter means is that it will typically retain direction and pace better than putters with a lower ratio.

For this review THP was able to spend time with the L2 Traditional Putter in its standard setup.

The L2 Traditional putter is large. It boasts one of the biggest footprints of any putter released and there is truly nothing else like this out there right now. Comparatively speaking, the L2 is more than double the size of most mid mallets and significantly larger than the most popular full mallets on the market. 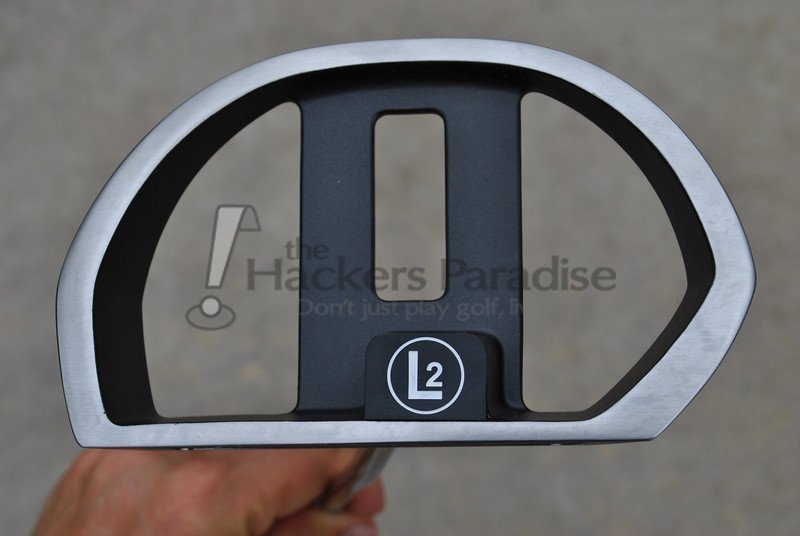 The design itself features a non-symmetrical shape that is not a completely solid design and combined with a 620g headweight is the primary source of its high MOI. Other unique characteristics are an elongated face with a 3-inch sweet spot, a flat sole on the front portion of the head (which combined with a 75-degree lie angle allows the putter to stand on its own), and a tapered rear portion of the putter that allows for a variable face angle as well as clearance through the stroke. As mentioned, the head is 620g, but it is counteracted with a 16-inch square grip that weighs 200g itself. 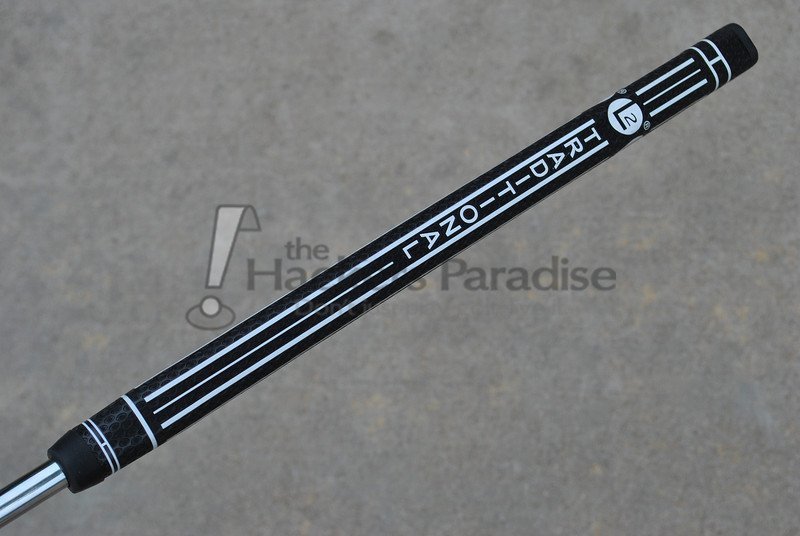 Aesthetically speaking, the abstract shape and overall size will be hit and miss for golfers. The company acknowledges it is a very non-traditional look, but with that though it will potentially pose an issue for many and perhaps prevent a portion from taking a legitimate look. However, much like oversized SGI irons there is definitely merit to applying such an ideology to putters. A bigger profile, alignment setup, face, and sweet spot might just be exactly what some amateurs need to increase confidence when standing over a putt. It may not win a popularity contest with the masses, but that does not mean it won’t appeal to a segment of golfers out there.

As might be expected, the feedback off of the L2 Traditional putter is unique. Thanks to the combination of a firm plastic composite insert and the head not being entirely solid, the sound/feel at impact has a distinct resonating effect to it. The higher pitch indicates the firmness, but the resonance of the sound really makes it feel like the ball is rolling in a hurry. Even with all of the weight behind the putter though, the feedback does not feel lost or overwhelmed by the design, which is a pleasant surprise. 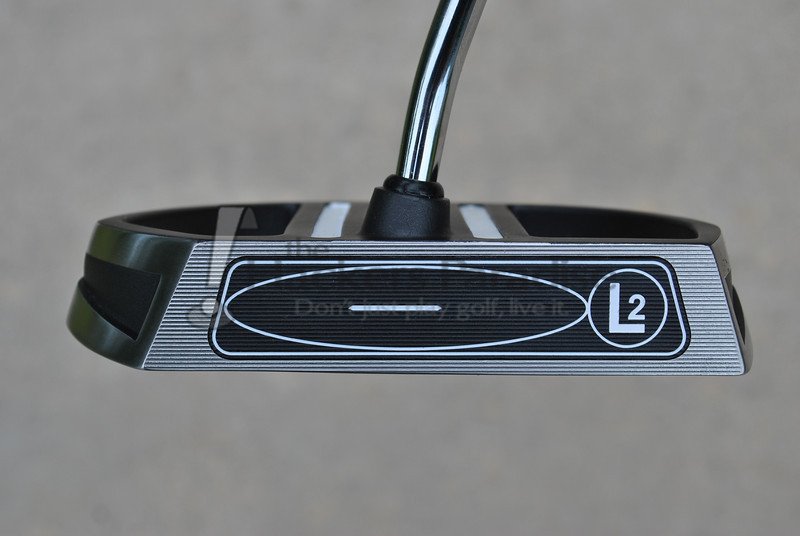 In testing, the L2 Traditional putter did in fact put a true roll on the ball and provided impressive accuracy not only on putts inside of 10-feet, but also from much longer distances. The distribution of the 620g headweight is intended to increase the MOI and sweet spot of the putter. Testing did indicate that the L2 held the line on center, heel, and toe strikes better than all putters it was compared to. 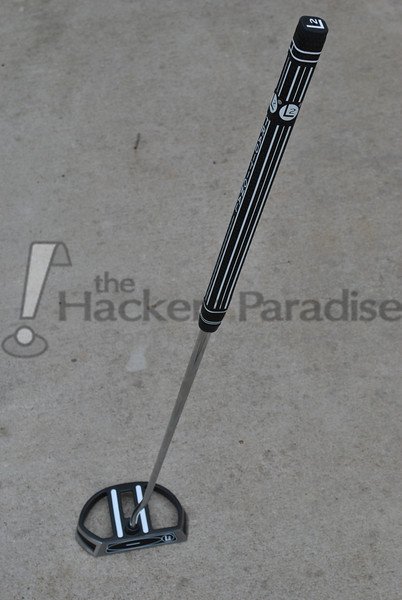 Alignment is another area that is much different than anything this reviewer has seen before. The massive parallel lines down the center of the head are larger than anything else out there, and because of the width and the length they truly do increase confidence in being aligned properly even while dwarfing the golf ball. Where it gets most unique is that the flat sole on the face region combines with the incredibly upright 75-degree lie angle to allow the putter to stand on its own. While some other putters talk about the ability to stand up, the L2 truly does so to the point that it is possible to align the putter head itself from down the line before ever stepping into the putt. 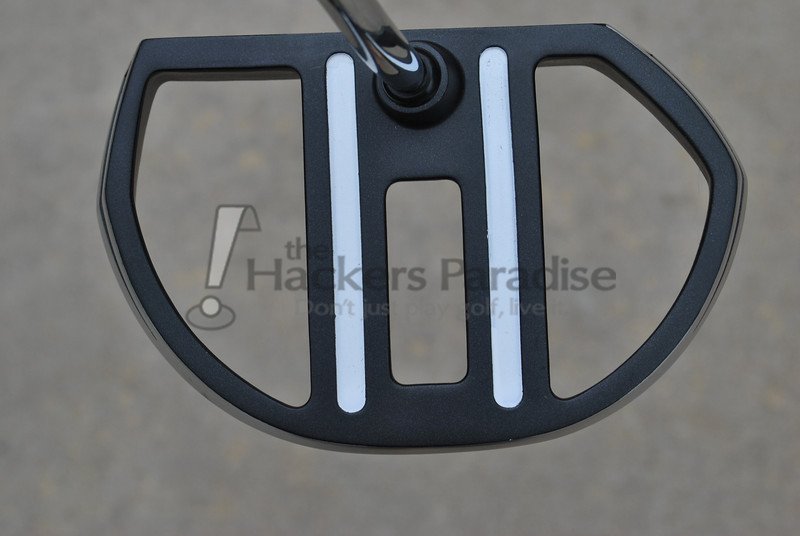 The accuracy and alignment of the L2 is impressive, but there are some precarious things when in use because of some of the design features. First, the bevel on the sole allows for a variable loft from 2 to 4 degrees based on how the user sets up. While versatility is nice, testing showed that it is possible to unintentionally manipulate at set up which could lead to a different loft from stroke to stroke. This means a different roll each time as well. Second, the 75-degree lie angle is incredibly upright and initially it feels precarious as it puts the putter head quite close to the user compared to standard putters. The final thing is the weight and size. At 620g in the head and 200g in the grip, the L2 feels like every bit of that in hand.  While it remains steady through the stroke and the rolls true, one cannot help but focus on the sensation that each putt is going to be hit with more force than necessary. As the size is concerned, it is not something that can be hidden. It draws attention from the user and those around as well, which is of no surprise given the unique nature.

The Lateral Line designs are definitely outside of the box and the L2 Traditional is unlike anything else out there. While it is easy to be hung up on the size, it does back up the performance characteristics which it touts. The issue that comes with being so unique however is getting people to put aside pre-conceived notions of what a putter is “supposed” to be and actually try it out. In the end, that is something which there is no definite solution for. Some golfers are willing to try new and different things and some aren’t. No matter what though, that shouldn’t take away from the performance abilities of a design, as every club fits someone.

The L2 Traditional putter has a price of $169.00. More information on it and the rest of the Lateral Line putter offerings can be found on their website, www.L2Traditional.com.