I am always on the market for a new golf belt, especially since I’m the guy that likes to wear a little something different on the course. I want colors. I want style. I want DIFFERENT. Almost every place I go these days, I find myself looking at belts and belt buckles. But going back just a few short years, I never was into the belt buckle thing. I know that people point to Anthony Kim as the guy that brought the large buckles to the masses, but for me it was something different. For me it was that famous logo.

Some would argue that this is the most famous logo in apparel. Back on track here, I decided a few years back that I needed a new black belt and I wanted something with a little more to it than my standard black or brown simple belt I had been wearing for years. Out of the corner of my eye, I saw a belt that had the Nike Swoosh where the buckle is. I was sold. I still have that belt and treasure it to this day…

However it awakened a beast inside me where I am the ultimate belt guy now. People say many things about Nike, but one thing they cannot question is their marketing. That logo stands for so many things, but to me it stands for my first venture into “stylish” belts. When we decided to review belts at THP and have a “Belt Week”, I had to reach out to the apparel giant. Nike was quick to help us out and let us look at both some men’s and women’s belts that they offer for the golf apparel community right now. All of which are stylish. We will go through the women’s belts first and then onto the men’s. CLICK PICTURES TO ENLARGE has a great oval belt buckle. The buckle is done in high gloss black and features the Classic Nike Swoosh. The shine of the buckle gives us just enough bling without getting jewels on there. This belt is classic and traditional yet modern. The buckle is large enough to draw attention and yet small enough to not get in the way. It is a beauty.

The 2nd ladies belt was something a little different. It is a thin pink belt with tiny holes throughout the entire belt. The Buckle is silver and the logo is done in silver as well. When we first got this I thought it was going to be a little plain for Golfer Gal’s taste, but when on, and paired with an outfit, the belt does exactly what it is supposed to do. It brings the entire outfit together. This is the classic example of why belts should be worn more regularly. We took a great white outfit and added this belt and a pink hat and made it adorable.

With the men’s belts I was able to go back to my roots with the samples they gave me. The first one is similar (although much nicer) than the belt that got me started a couple years back. It is a classic black leather belt and the buckle is gorgeous. What this belt does well is add a large, stylish belt buckle, but still keep it simple. As much as I like loud belts, there is no reason to be crazy with an accessory just for the sake of being crazy. It must all tie in if that makes sense. Fortunately for golf apparel fans, the Nike Swoosh will match up perfectly with just about any gear you throw at it. This one is so well liked, we may just have to find it in white as well.

Now readers of these reviews know that when something comes along that is a must have for any golfer, I will find it for them. This next gem from Nike IS MUST HAVE FOR ANY GOLFER! It is a reversible belt (black and brown) that is slightly textured is quite nice. The buckle is fairly simple with it being silver with a black swoosh on it. Why do I like it so much? Because the black logo comes off and is a BALL MARKER! And of course Nike was good enough to Overall, the Nike brand keeps rolling along. We always expect there to be a slip up, but there never is. Their stuff that we tried was well made, comfortable, and of course stylish. They keep making me a believer each and every season when their new apparel comes out. These belts are no different. You can pick these up and hear tons more about Nike Golf Here. 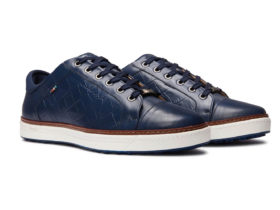