Nike Golf has never had a hard time generating buzz for their releases, though maintaining that feeling long term has sometimes been much more hit and miss. With the next line on the horizon, Nike continues to garner attention, but they are also counting on 2014-2015 marking a start of much more prolonged interest based on all-around performance. The Nike Vapor Pro-Combo irons mark the continued evolution of the Pro-Combo’s with an effort to truly fill the void between their players and game-improvement irons, and because of that there are some very interesting changes – and not just the Volt color scheme.

Volt. The name of the color in question is Volt, and Nike considers it one of the two colors they are most known for (the other being the orange of shoeboxes), so the fact that it is being featured in this golf release cycle for them isn’t all that surprising. What is surprising though is the general movement away from the “Tiger Red” we have seen and associated with Nike for the past several years. Either way, Volt has been the focus of much chatter since the public first got to catch a glimpse of the releases. Some hate it, some love it, and no one should be surprised by that split. Because of this, it’s worth mentioning right away that the Volt filled Swoosh on the back of the irons can in fact be paint-filled, and since that is the color’s only location on the club it should provide an amicable solution for those who are not big fans. 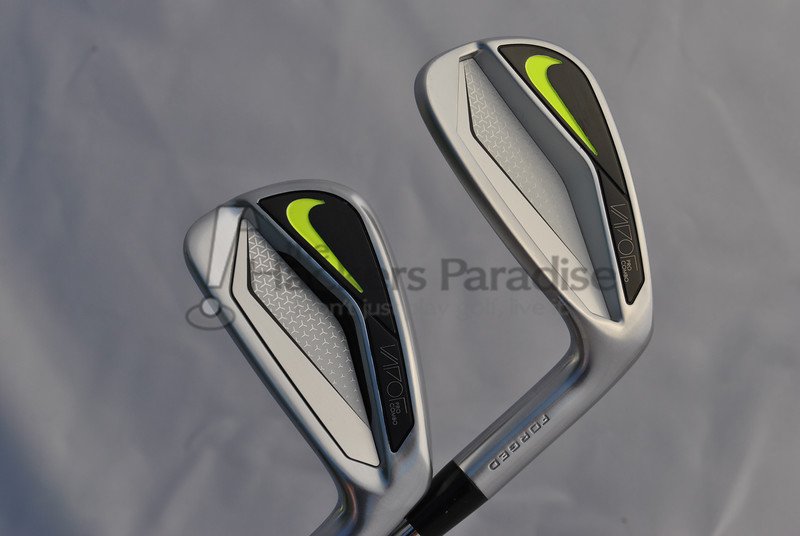 With the color talk out of the way, there is a lot going on with the design itself that is a major transition for Nike. The irons have lines that flow differently than what we have seen in previous Pro-Combo releases, with more geometric angles throughout that give a much more modern appearance. Because of the cavity piece there has been a bit of talk about possible “sharp edges”, but rest assured fingers are safe and it is just a look that ties in well with the angles of the rest of the clubs’ body. The rear portion of the club features a black section amidst the satin chrome that surrounds the Volt filled Swoosh. This section has also generated a bit of talk, but the big misconception by some is that it is a plastic insert when it is actually just a portion of the iron coated in PVD finish. Though pre-production sets did show some wear to this section after time in the bag, the retail versions did not have that issue in testing as they feature a much more complete PVD coating. 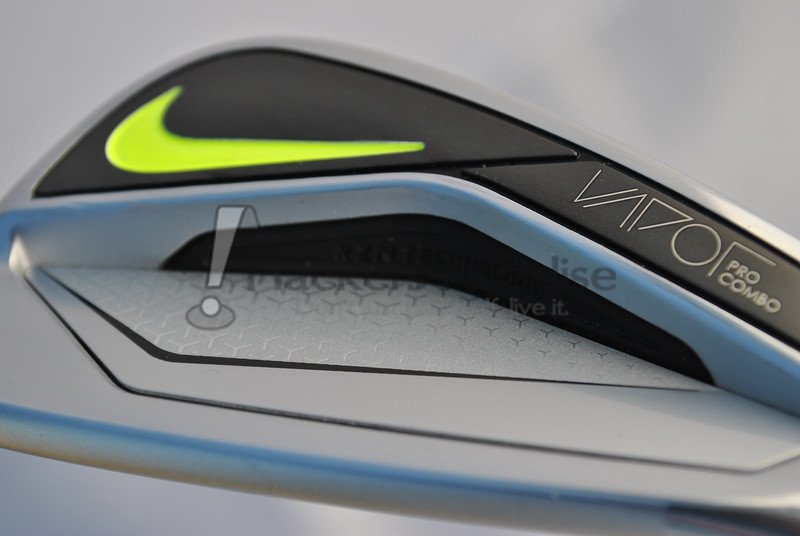 The overall profile of the irons is a continued evolution of the Pro-Combo namesake as well. They feature a slightly thicker topline and sole, as well as a beveled leading edge throughout the set that while visible is not too drastic. They set up with a bit more offset than past iterations and all of these things combine to finally allow the Pro-Combo to be an iron that differentiates itself from the Pro and Speed iron sets within Nike’s Vapor line. Additionally, they are a progressively sized overall profile from the long to the short irons, but it is done so that there are no drastic visual changes in size.

For this review THP was sent the Nike Vapor Pro-Combo’s in a 4-PW setup paired with the True Temper DG-Pro S300’s.

The Vapor Pro-Combo irons are a forged iron intent on helping to provide solid feedback throughout the set. In the past, one of the talking points has been the noticeable change in sound/feel at the different transition points in the set. In the Vapor version the set is split into traditional muscle cavities that are full body forgings in the short irons (8-A) and RZN cavities which are forged chassis with a high-strength steel face insert in the long irons (2-7). With the long irons and their lighter RZN insert and thinner face, the intention was to create more ball speed and higher trajectory where most golfers need it while also allowing 45g of weight to be displaced and moved elsewhere. Any time there is a split construction in a set like this one the concern is the transition point and if there is a notable change in sound/feel. Finally with the Vapor Pro-Combos Nike has really tuned it quite well. Though there is a slight difference in tone, most will not notice it, which makes for a solid blend throughout the set. 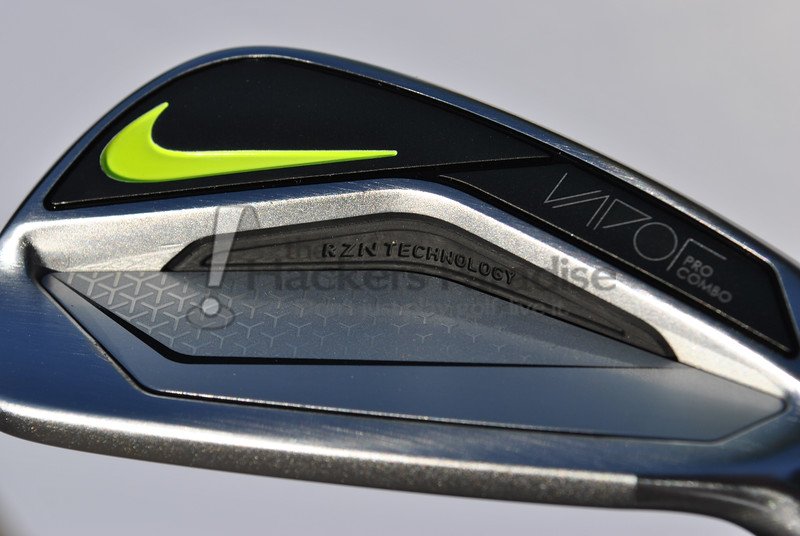 At impact, the irons offer a very solid tone without venturing into the realm of being “clicky”. With that said, the sound is not so dense that feedback is dulled across the face and the tone does change from heel to toe to center strikes. One of the most interesting things seen with the Vapor Pro Combos during testing was their overall resistance to twisting, an issue that was seen in past versions by this reviewer. It makes sense that stability has been improved given the design of the “Modern Muscle” aspect of the club that moved the CG further away from the heel than in the past. This proved in testing to aid the resistance to twisting in uneven and heavy-rough lies. In fact, for an iron in the “game-enhancement” category they provided a surprisingly consistent and balanced feel throughout the set. 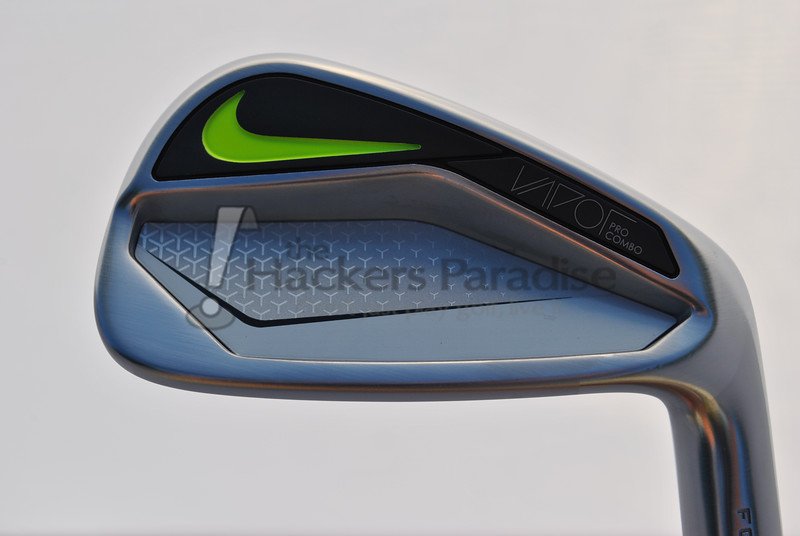 The Vapor Pro-Combo irons are designed to be a progressive set in every sense of the word. As touched on earlier, the head size itself actually varies slightly throughout the set from long to scoring irons, but additionally the sole width and weighting progress throughout the set. All of this is done with the intent of maximizing launch/flight where most golfers need it: higher in the long irons, mid in the mid irons, and flatter in the scoring irons. If the actual head design pieces were not enough to accomplish this, Nike has for the second time paired their Pro-Combo set with the True Temper DG Pro shafts, a shaft set that follows the same progressive flight traits which they sought to achieve with the heads themselves. 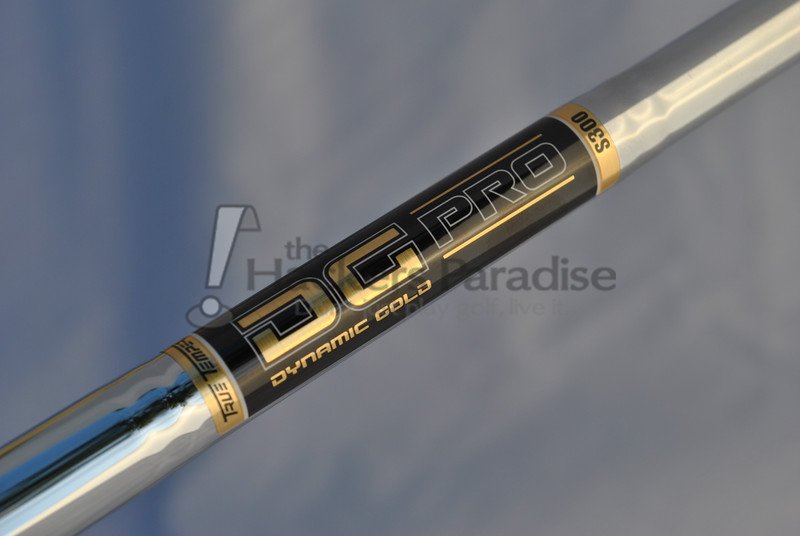 An iron of this type/profile fits in between the “traditional” classes of players and GI and with that has traditionally come an issue for many amateurs with getting enough launch and effective trajectory on the golf ball. During testing the Vapor Pro-Combo’s proved to be one of the more consistent launching sets in that “game enhancement” category. The long irons in particular (4-7) proved to be easier to elevate than their predecessors by a significant margin. Much of this has to come back to the weight displacement thanks to the RZN material, but also the wider soles they feature. In the scoring clubs (8-PW,) the launch was more penetrating but still worked to a very solid apex point. Obviously, the long irons (2, 3, 4, and 5) are still going to be more challenging for some golfers who seek the launch and forgiveness that comes with a hybrid comparatively, but for those who prefer a long iron they offer very good consistency. 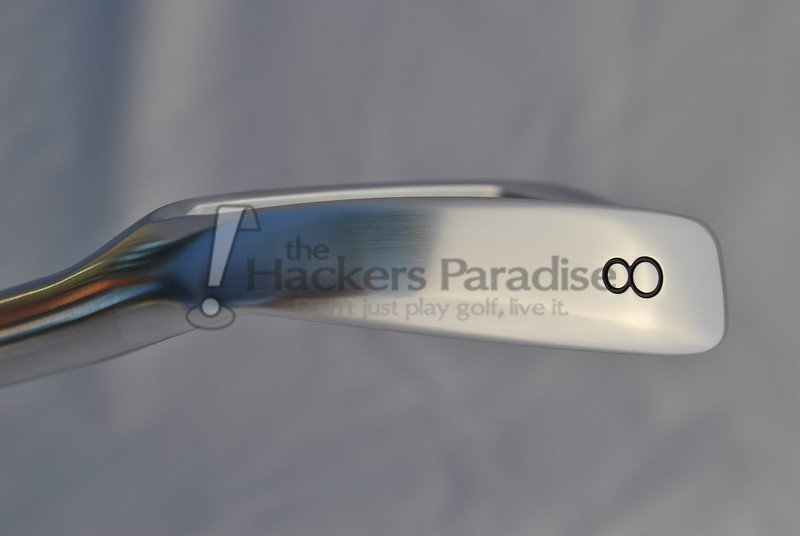 Also worth noting as it pertains to trajectories into the green is the use of Nike’s X3X grooves with the Vapor Pro-Combo’s. Though the flight/trajectory itself allowed for a soft landing into greens with the spin one would expect as you progress through the set, from the rough is where the X3X grooves showed to have aided shots into greens. Though they did not add spin, time and again in testing shots from rough the drop off in spin that occurred was lessened. With the X3X grooves Nike has added more grooves to the face that are closer together and deeper to help channel away more material. Again, they did not add spin in testing, but for this reviewer there was definitely a lessened drop-off in performance from the rough. 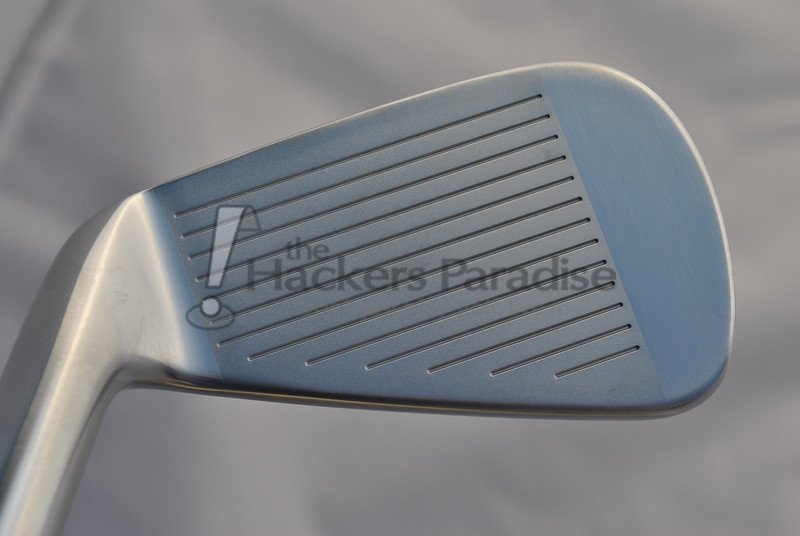 The Vapor Pro-Combo irons are not designed to be a distance set, so it should surprise no one that there was a drop-off seen when compared to the distance focused irons out there. Overall, about a ½ club distance differential was seen for this reviewer, but when compared to irons in the same classification the distance was spot on with the upper echelon there. Clearly the focus on launch and trajectory has aided with the distance considerations, but the most improvement compared to prior iterations is with the forgiveness.

Thanks in part to the weight movement of the design/shape itself (not just the RZN cavity clubs) in getting the CG more towards the toe, the forgiveness seen was good in terms of keeping the line intended while not dropping copious amounts of distance. Additionally, impacts low on the face responded without being overly penalized, line maintained, but naturally with a lower overall flight and a much different sound. Near the heel of the club saw the most distance loss, but this is not surprising as typically when an iron profile gets smaller (GI to GE to Players) this miss gets more significant. 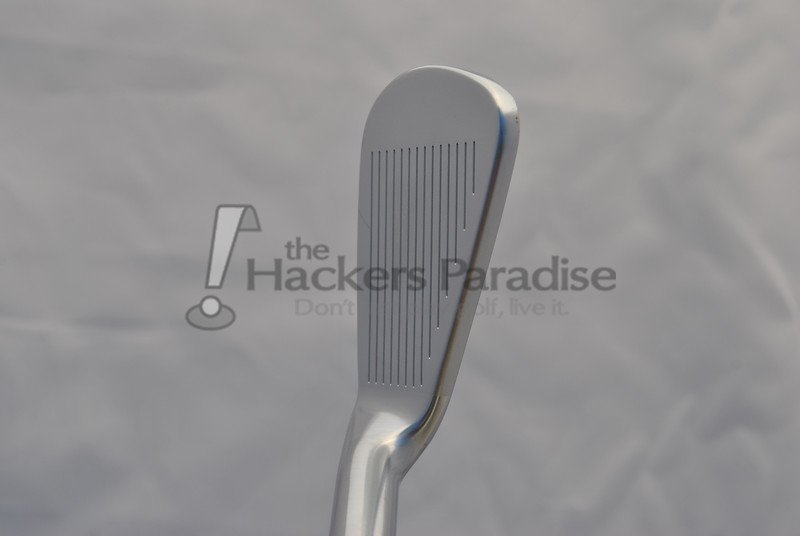 The thing to note here is that although the Vapor Pro-Combo’s show a jump on distance and forgiveness compared to their predecessors, they are still a more demanding type iron. One will not see the same forgiveness as out of a GI or SGI iron and there is a level of demand that will always be here. However, for what they are and the market segment they are aimed at, they provide a very good amount of accuracy, distance, and forgiveness for those who possess a swing with consistency.

In terms of overall workability and versatility through a variety of lies, the Vapor Pro-Combo’s excelled. With the wider sole of the Vapors and the leading edge bevel that applies throughout the set, issues such as digging and twisting that some saw in previous Pro-Combo releases were certainly addressed. The irons handled the rough, sand, wet lies, and hardpan extremely well. When steep and shallow swings were put on the irons they responded with no significant digging or bounce issues. Additionally, Nike also managed to maintain the workability of the irons. There was no issue getting shots to turn over in either direction or when flighting them up and down. For their class, they showed a very good balance in this category throughout the testing. 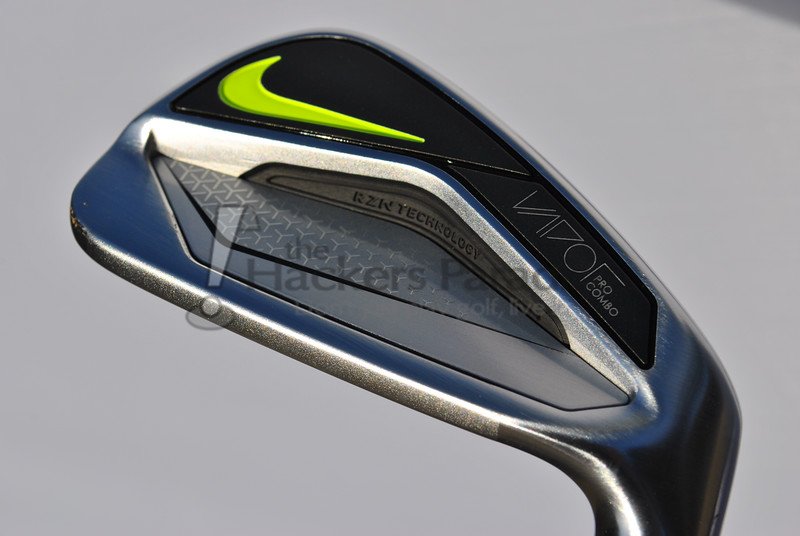 There is little doubt that the biggest discussion point for many with the Vapor line from Nike will be in relation to the use of Volt as the accent color of choice. Whether that is right or wrong will vary by the individual. The Vapor Pro-Combo irons have garnered a lot of talk from the moment the first images were released, and with the changes Nike made to the designs and the performance that they managed to achieve, the case can certainly be made that it is deserved. While they are not the most forgiving or longest clubs out there, that isn’t the goal that they set out to achieve. These are irons that fit squarely between the players and game improvement label, and they achieve that better than any of the past versions by a good margin.

The Nike Vapor Pro-Combo irons in 4-AW are priced at $1099.99 and more information on them and the complete Vapor lineup can be found at www.Nike.com/Golf.