In what serves to be an extension of their Works lineup of putters, Odyssey is releasing five putters also featuring the new Fusion RX insert, but with a different aesthetic/alignment twist. The Odyssey Big-T putters use the same “T” alignment setup which can be seen in the Works V-Line, but with a much improved black/white color contrast to improve its effectiveness. The putters serve to combine many different aesthetic and design technologies into a package that hones in on helping golfers where they struggle the most, alignment. 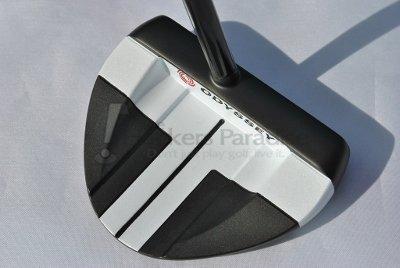 For this review THP was able to spend time with the Big-T V-Line CS model from the new release models.

Odyssey on the V-Line Tank Cruiser:

Big T takes our revolutionary Versa and Marxman alignment systems and puts them together. It’s part of Odyssey Works, a high performance technology platform that takes everything we know about putting and puts it to work.

This line takes our Fusion RX insert where feel meets roll and combines it with dual alignment that gives you the ultimate setup to the ball. Yes, you really get all that proven technology in one putter. That’s why Odyssey Works Big T will be the benchmark for performance putters with dual alignment.

We’ve taken the most legendary insert of all-time that’s the best feeling, best selling, with the most Tour wins and combined it with unbelievable new roll technology to create the Fusion RX.

When you’re standing over your putt, you’ll see the Big T. It gives you alignment to setup to the ball, and all way through your stroke.

The line includes a handful of major-winning, Tour proven head shapes, but the V-line is what started the revolution. The V-Line is one of the hottest mallets on Tour and on the market. It has everything from a high MOI that adds consistency, to a pleasing symmetry that helps accentuate the alignment. We also added the #5, V-Line Center Shaft and the new Big T Blade to complete the family.

This black shaft reduces glare and has a unique, contemporary look that’s been very popular with Tour players.

The most noticeable feature of the Big-T V-Line putter is clearly the “Big-T” aspect of the design. The bright white “T” on the head, which is a stark contrast to the dark finish of the main body, actually has more to it than initially meets the eye through pictures. The “T” section is not simply white, but instead is actually a pearlescent finish that really pops in the sunlight and gives the look a little more thought/detail than simply slapping basic black and white on the putter head and calling it good. Additionally, one of this reviewer’s largest issues with the Versa type two-tone releases from Odyssey has been the quality of how the second color blends/looks when one gets them in hand and up close and personal. In the past, the finish quality has been lacking in the opinion of many for what one expects from Odyssey, but with the Big-T design and application that is no longer prevalent. This is a really well finished putter, and though the actual concept won’t be for everyone with the alignment “T”, the finish itself should no longer be a question. The head is rounded out with typical Odyssey engraving styles in “classic” Odyssey accent colors and finished off with a black putter shaft to really continue aiding in the contrast of the bright “T” alignment. 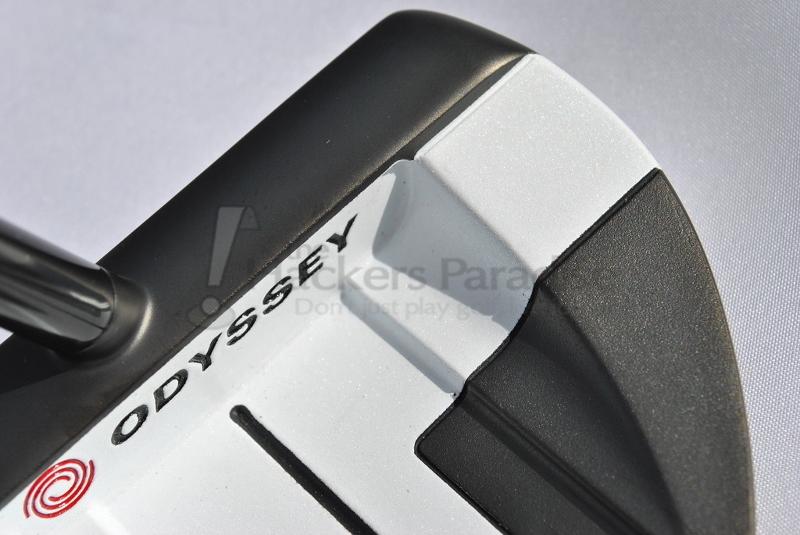 The actual shape/design of the head is a full mallet look, which serves to provide a higher MOI setup for users while also trying to maintain an aesthetically pleasing smoothness with its lines. It proves that mallets don’t have to look like something from outer space. The rounded and elongated overall rear flange of the V-Line is reminiscent of some classic headshapes and the head manages to add adequate front-to-back depth without ever teetering on being cumbersome. As this reviewer has mentioned about the V-Line shape before, it’s nice that it doesn’t simply utilize the standard half-circle shape on the flange, but instead elongates it. It’s a more unique look and actually aids with alignment, which will be discussed later in more detail. 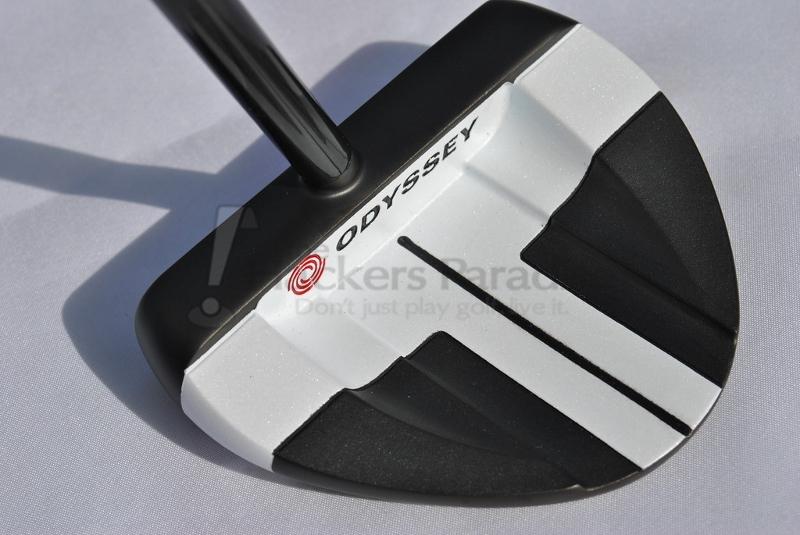 In a continuation of what Odyssey did with the Works line, in addition to the standard grip option the Big-T line is also available with a SuperStroke grip pairing for twenty dollars more. In terms of size it is a somewhat interesting move as the 3.0 is a bit large. With that said, the grip is what we have come to expect out of SuperStroke and features the red/white/black color scheme. It’s a good looking grip, but it will simply come down to how comfortable the user is with the 3.0 size. Either way, putter grips are typically easy changes if they are necessitated. 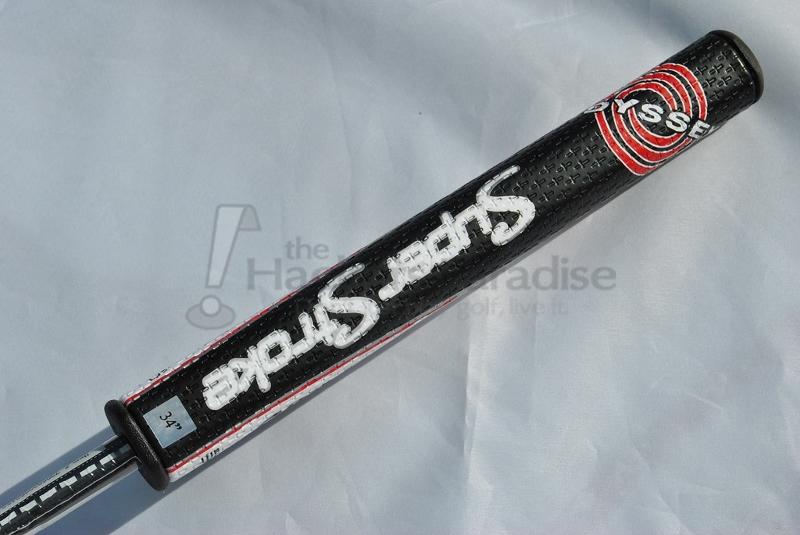 A last thing to mention is the fact that this review is over the center-shafted version. Odyssey knows CS users are a “vocal minority” and though they cannot produce a ton of CS offerings for several logistical reasons, they like to put one out when they can to show they do care about those users. In the case of the V-Line, they believed this to be the perfect shape and alignment setup to do just that, and it will undoubtedly make a lot of the “vocal minority” out there very happy. 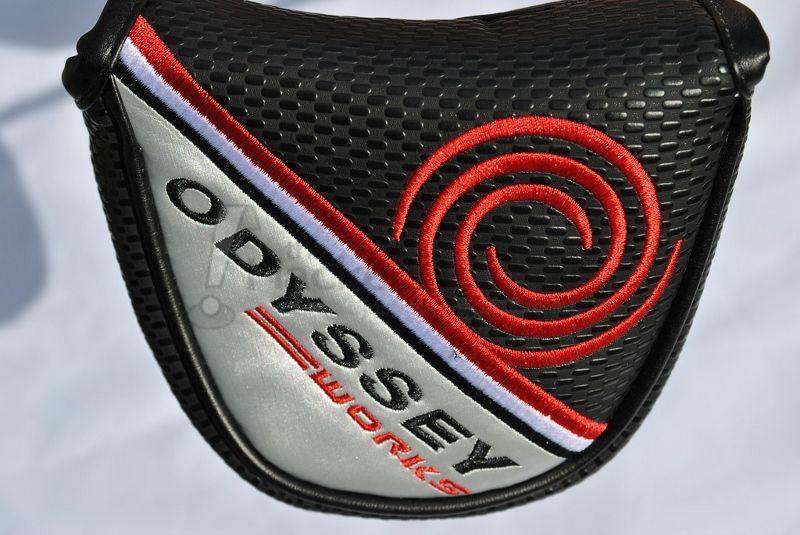 Coming in at 350g, the V-Line Big-T center shafted putter hits right at the weight that most golfers now consider “standard”. It’s a good weight for the head and given the profile it’s nice to see them keep it in that range. Paired with the stock SuperStroke 3.0 grip, the balance point of the putter was kept in a very traditional location. This prevented any issues with the putter feeling too head-heavy or head-light during review. It’s one that someone can pick up, go straight to the putting green, and not have any thoughts or concerns with the overall weighting of the design. Through the stroke the V-Line continues to be one of the better mallet designs out on the market in the eyes of this reviewer, mainly because it blends a non-extra-terrestrial look with effective proportions to distribute the weight adequately and efficiently throughout the head. Even on time spent hitting putts out on the toe or the heel to test the reaction of the head, the balance was very good with no issues of twisting in the hands, though some of this credit surely needs to go to the grip selection and insert technology as well. 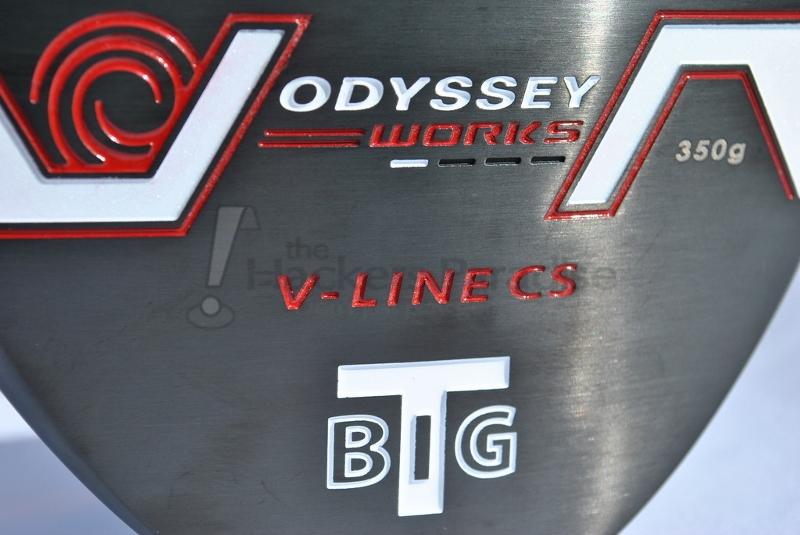 The V-Line shape in and of its own has a very simple and effective alignment setup. The flange length and depth, as well as how it has been designed to create a channel from the face to the rear of the putter, is quite effective when it comes to alignment. With the Big-T alignment setup, Odyssey has used that natural shape of the head and accented it with the “T” alignment finish to make a putter that sets up and aligns incredibly well. 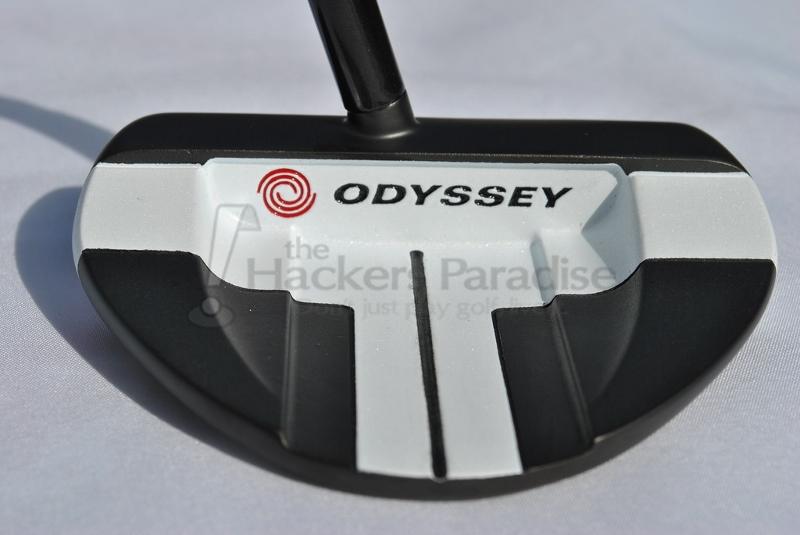 The origin of the Big-T is a multi-faceted one. The idea of the two-plane alignment feature on putters from Odyssey isn’t new, and as in various editions of their #9 they have used a perpendicular line the width of the topline in combination with the single sight line. However, after a realization by Odyssey’s Austie Rollinson while in Japan, the notion of making them larger in a similar manner to the Versa came about and developed into what we see here. 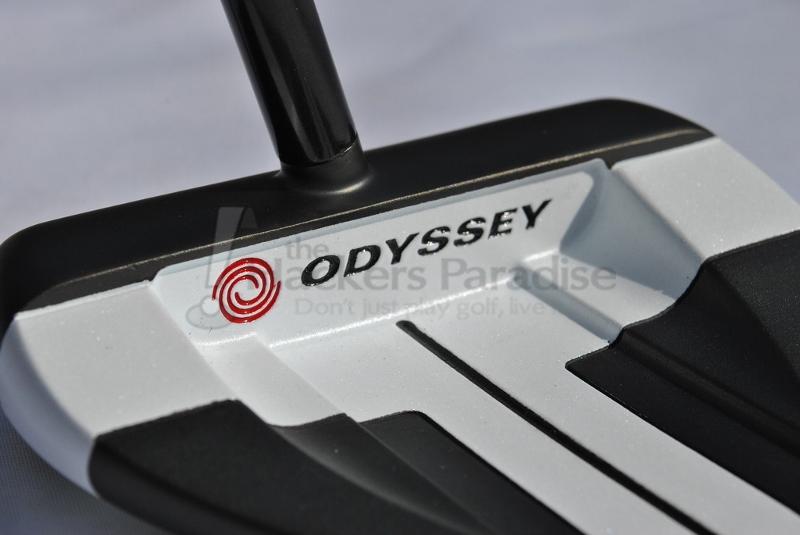 Basically, with the Big-T look you have the standard Versa scheme that runs perpendicular (to help with proper face angle alignment) combined with the vertical Versa scheme (which was used in the Marxman and 2-Ball designs to give a look that helps with face angle and target line setup). The Big-T look is actually used in the Works version of the V-Line, and the reason for that is this particular head shape is the foundation design that allowed this scheme to be created and put into production. Essentially, it’s an ideal head shape for the “T”. 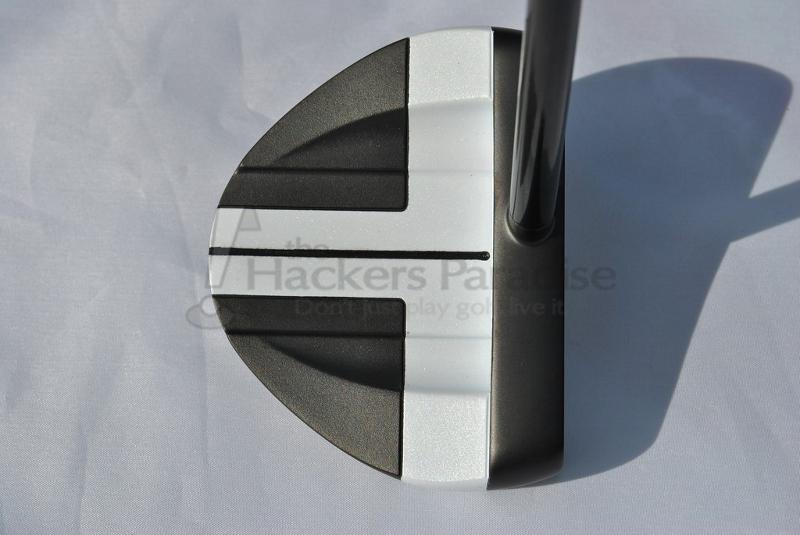 While effectiveness here will inevitably come down to whether or not the putter actually fits the user’s eye, this reviewer found the Big-T V-Line to be very good during testing. In fact, it backed up all ideology behind the “T” look. As more time was spent using the putter, the more realization there was about the face angle effect on putts of all lengths, while the target line aspect was especially impressive from 10 feet and in. 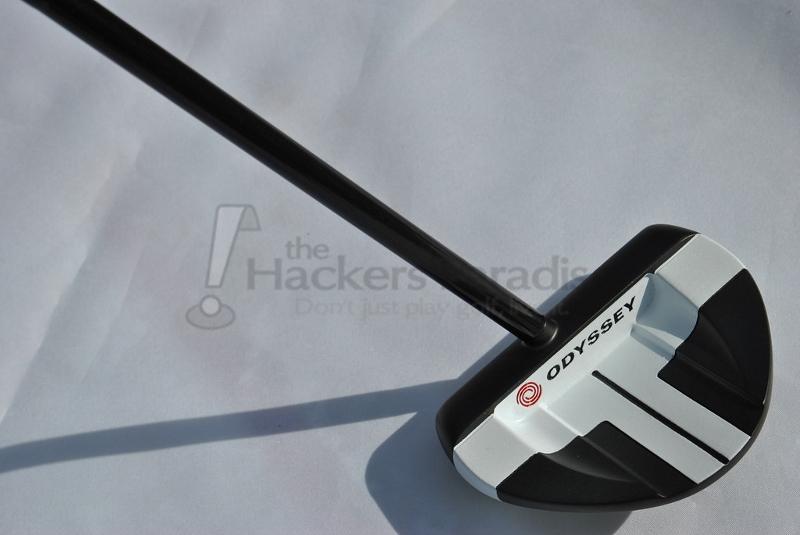 The Big-T line of putters is actually considered by Odyssey to be part of the Works lineup, and as such they also feature the Fusion RX insert that has been gaining traction (literally and figuratively) in a big way both on tour and with amateurs. The name “fusion” explains precisely what they set out to do and that was to combine their best two face technologies in the White Hot insert with its feel and the Metal-X with its forward roll characteristics. To do this, you have the White Hot insert with a very thin metal mesh which will flex with the insert at impact so the feel/performance profile of the insert is kept but with improved forward roll thanks to how the mesh grabs through impact on putts. 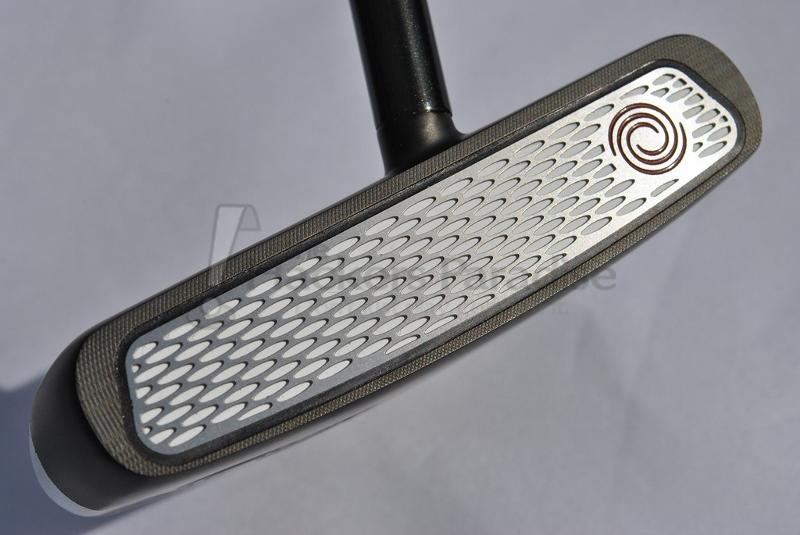 During review, it quickly became evident that the Fusion RX does all of that it claims to. The feel continues to be classic White Hot in tactile terms with only a very slight pitch change thanks to how the mesh actually flexes with the face. The biggest improvement though when tested next to three of last year’s White Hot Pro models is that there was definitely less skidding when the ball was put onto its path. Balls were struck all across the face in order to examine the roll and distances seen, and as has been the history with the White Hot insert, there was no sensation of any “dead spots” out on the toe or heel region. Instead, there was adequate feedback on the miss while maintaining very good distance and direction retention.

Odyssey is a company that has never rested on their laurels. They are always willing to try and apply new things, but they also know what they do best and manage to adequately combine these two mindsets into putters that appeal to golfers all over the spectrum. The Big-T line is a great example of this. The alignment aid of the contrasting “T” proved through testing to be a highly effective evolution on the Versa scheme that Odyssey has been utilizing, while also implementing arguably the best insert tech in golf. The looks of the Big-T models won’t be for everyone, but nothing is. Those looking to improve their basic alignment both to the target and with face angle will find that it does so very well. When it comes to putters, options are a very good thing, and this is another example of Odyssey really understanding that.

The Big-T V-Line CS, as well as the other four models in the Big-T release, have an MSRP of $179.99 for the standard grip option and $199.99 for the SuperStroke grip option with each version having a scheduled release date of June 12, 2015. More about the Big-T putters and all of the rest of the Odyssey putters can be found on their website, www.OdysseyGolf.com.