One of the biggest putter trends right now is the increasing numbers of companies offering counterbalanced models in addition to standard models. As more tour players use them, the curiosity of the masses has increased exponentially and this has led to more trying to get in on the trend. While most have considered it adequate to simply add weight to the head and grip of the putter, Odyssey has taken an innovative approach in order to offer what they believe to be a more complete counterbalanced option.

For this review THP tested the 38” version of the V-Line Tank Cruiser.

Odyssey on the V-Line Tank Cruiser:

Tank Cruiser is bringing out the BIG guns with a new level of fitting options in the most technological counterbalanced putter in golf. You’re getting adjustable weighting in the head (to customize feel) AND at the counterbalance level (to customize stability) from a putter that’s driven by Tour feedback. So you’ll dial in your balance better than ever for your most consistent stroke.

It’s highly engineered for consistent sound, feel and performance across the striking surface. It’s the #1 Insert on Tour and it’s picked up victories all over the world.

Find the balance you like. The adjustable head weights (10g, 15g, 20g) allow you to adjust the head weight to 365g, 375g or 385g. The counterbalance weights (5g, 15g, 30g) let you to dial in your putter balance so that it’s exactly how you want it to feel. Get ready for your most consistent stroke.

A new longer version of the SuperStroke Grip, with Odyssey branding combining the fastest growing grip on Tour with the #1 Putter Brand.

While Odyssey has never been one to shy away from trying different looks and contrasts in their putters, the V-Line Tank Cruiser is as clean as can be from top to bottom. The head itself is finished in the same non-glare black finish that we have seen recently from Odyssey and the White Hot Pro insert serves as a stark contrast to the finish. The engraving on the cavity and sole of the putter is simple and the paint-fill is the classic red and white motif most are very familiar with. Additionally, the changeable weights feature that same red and white paint scheme and are incredibly heavy duty designs. 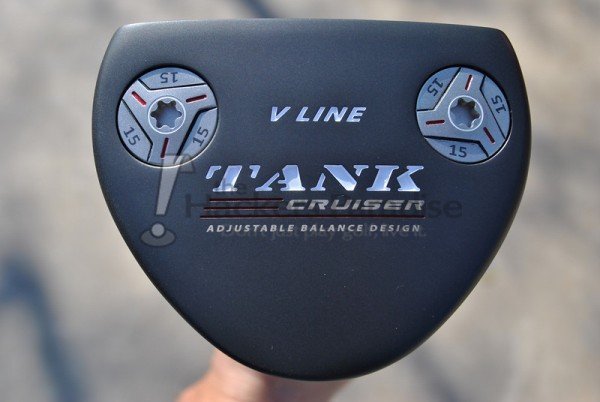 The headshape itself is a full mallet intent on providing a higher MOI setup while also maintaining smooth lines throughout all angles. The rounded build of the V-Line is reminiscent of some classic headshapes with the elongated and flowing bumpers on the flange that bend to the overall shape of the head. It manages to be deep enough to not seem cumbersome at address, but also doesn’t fall into the simple half circle shape. The fact that the flange elongates as it works to the back provides a very nice overall visual. 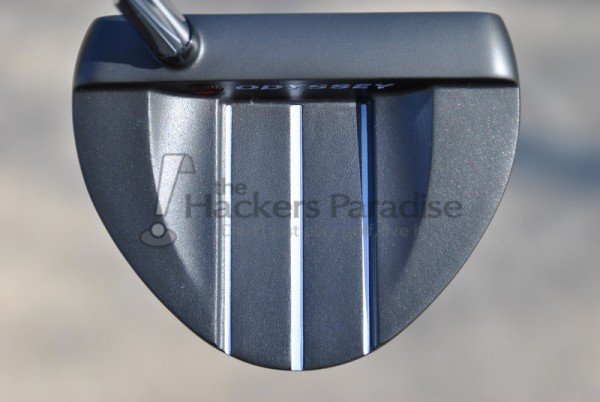 The rest of the V-Line Tank Cruiser package is rounded out by the addition of the Super Stroke “Tank” version that Odyssey designed in coordination with Super Stroke. It features the red and white colors most would expect and the Odyssey branding on the front is a nice touch. Overall, the grip is only 15” as opposed to most 17” belly options seen on counterbalanced putters and the diameter is that of a 2.0 version of the standard SS grips. It does feature Super Stroke’s patented non-taper design, which is certainly a much different look than a traditional putter grip, but they have incorporated a weight port in the end-cap in order to enable true weight/balance customization. 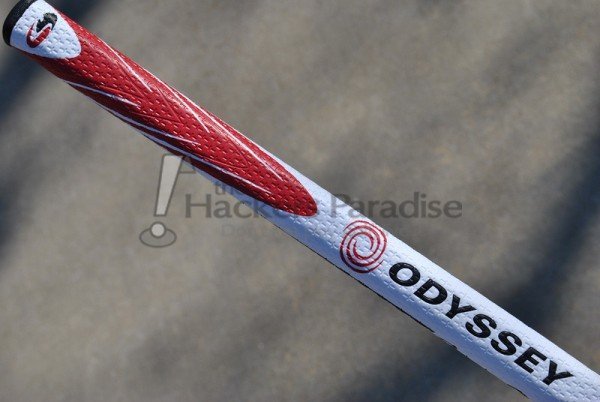 Balance is an interesting thing to talk about, particularly with the unique take on it in a counterbalanced putter. The primary idea is that the addition of weight in the head and grip of the putter can affect the balance point of the head, moving it up or down dependent on the weight variance in each location. This movement/manipulation will help to increase both the MOI of the putter and (more importantly) the stability, as it should play much like a belly putter without the anchor point. 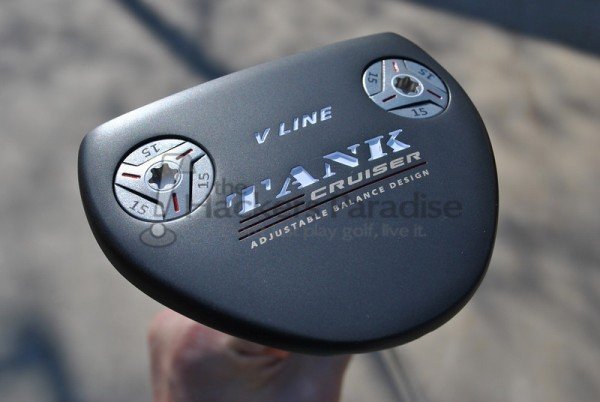 Rather than simply adding weight to both ends and calling it good, the Tank Cruiser line instead offers the ability to tweak and tune the weights so that the user can find their specific proper feel while still benefiting from the technology. The V-Line and all of the rest of the Cruiser putters come with a full weight kit containing 10g, 15g, and 20g weights, which allow for setting the head from 365g to 385g, and also 5g, 15g, and 30g weights for the grip of the putter. 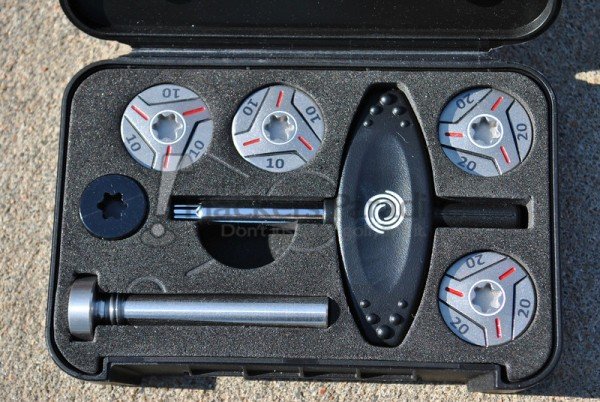 Odyssey was adamant that they didn’t want to just add weight and call it counterbalance, but instead the goal was to make a more unique and a much more effective application of the weight than we have seen previously. In spending time with the putter, it appears that was certainly accomplished. By moving the weights around, the change in feel and flow of the stroke was evident, but no matter the combination used, the stability was there consistently. For this reviewer, the combination of 20g weights to bring the head to 385g and the 30g backweight proved to be the most effective and comfortable setup, while four other users all ended up with totally different combinations that they felt were the best feel and performance for them. No matter the setup though, the effectiveness and the feel is what continued to stand out for all. 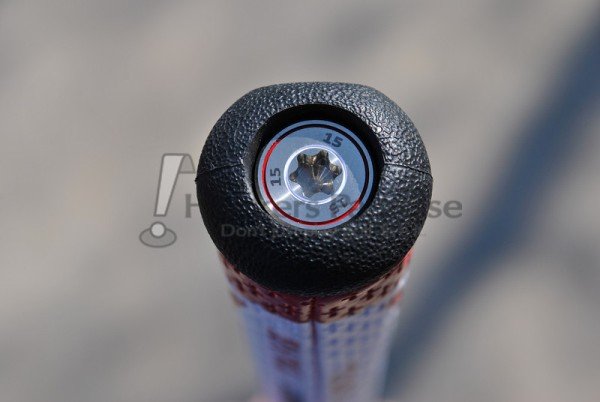 The V-Line alignment setup is extremely simple. It features three alignment lines that run the entire length of the elongated flange that resides in the channel situated between the two sweeping bumpers. The center siteline is wider than the outside two and brings most of the focus of the user’s eye while the outside lines effectively frame the outside of the ball. It’s a simple setup, but the deep nature of the flange on the full mallet works really well with ensuring the putter is set to the desired target line. While the overall effectiveness will come down to whether or not the V-Line fits the user’s eye, the shape and siteline combination makes for a well-rounded mallet design that is simple and more traditional than many shape options. 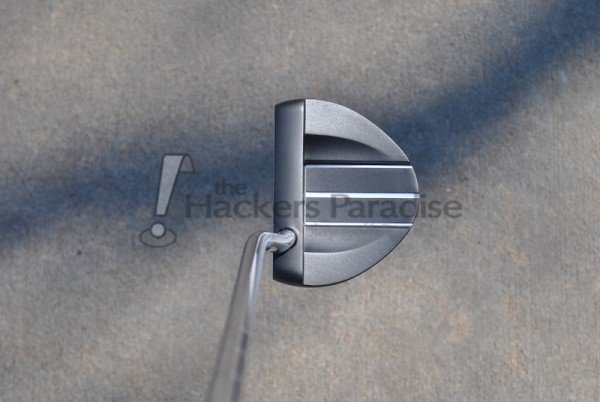 Being that the V-Line Tank Cruiser features the White Hot Pro insert the sound/feel is no different than that of prior WHP models, even with the added weight. At impact the insert provides a much deeper and more muted sound than that of a milled face, which leads to a very soft overall feel. Even though there is a soft feel compared to some of the prior White Hot inserts, this most recent version is more firm, which allows for enough audible feedback for the user to know exactly where on the face ball made contact.  Most importantly, there is a consistency with the feedback the user gets in the feel/sound and there was never any “dead spot” feel that some other inserts can create. 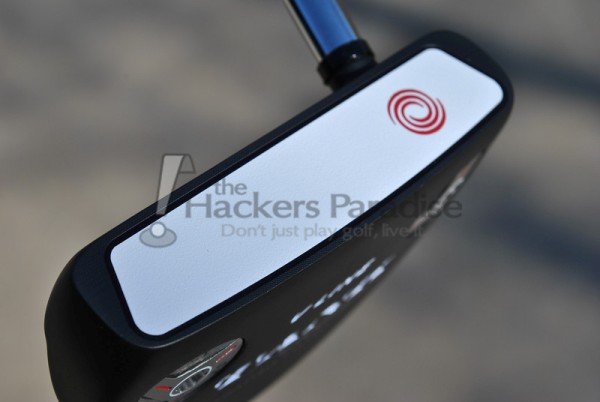 The V-Line Cruiser is one of the most stable mallet putters out there and obviously much of that has to do with the counterbalance design. Thanks to the ability to alter the weights in order to change the overall feel, there is a massive amount of versatility available in order to find the ideal balance for the individual (rather than just leaning on a one-size-fits-all setup). Add to the weighting options the Super At 38”, the putter is incredibly easy to feel comfortable gripping anywhere on the 15” surface area thanks to the non-taper design of the Super Stroke grip. However, as unique as the grip is and as popular as Super Stroke has become, there may be some who do not care for the overall diameter of the grip in hand. It is definitely something that needs to be tried first to ensure proper comfort in individual preference. 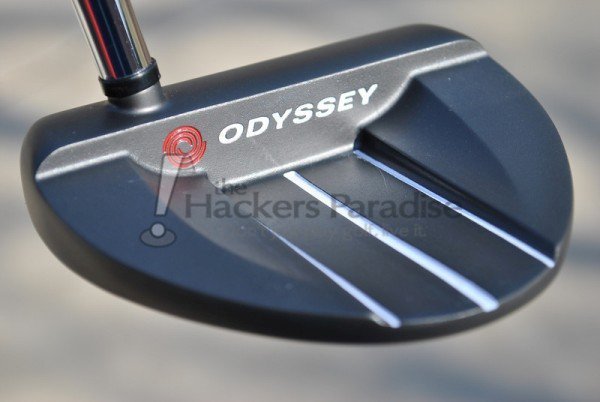 On the greens the aforementioned balance of the V-Line Cruiser combined with the higher MOI design and White Hot Pro insert proved to provide not only a consistent roll from short and long range, but it offered a very impressive amount of accuracy. Although some distance/energy loss did occur on toe and heel putts, the amount was much less than what was seen from similar fully milled designs. Most impressive though was the ability of the ball to hold its line with a true roll even on the misses. The lateral forgiveness seen in testing is not something to overlook. Whether one is an insert fan or not, the WHP paired with the adjustable setup in the Tank Cruiser makes for a putter that will impress many and should certainly gain a good deal of attention with the growing migration of golfers from all skill levels to a counterbalanced putter.

Odyssey operates under the motto of “Innovate or Die”, and while that may seem a bit extreme to some, the fact is that it is exactly what they believe. With the V-Line and the rest of the Tank Cruiser lineup they have taken a “technology” that is not new (despite its recent growth in popularity) and made it their own. The putters will allow for the individual to tweak the setup in order find their comfort zone, and therefore increase their confidence on the greens, which is perhaps the largest battle on the greens for golfers. All in all, it is both unique and effective.

The V-Line Tank Cruiser has an MSRP of $249, and much more about it and the rest of the Tank Cruiser line can be seen on the Odyssey website, www.odysseygolf.com.