If you ask any golfer out there if they would like to hit the ball straighter and longer than they currently do, the answer would almost certainly be a resounding yes. It’s the nature of this game. As golfers, we are always seeking out that extra yard and that magic item that lets us find the short grass more. As of late it could certainly be said that the biggest strides for providing golfers with these desires is through the continued evolution of the golf ball. Very recently we have seen 4-piece, 5-piece, and even 6-piece golf balls enter the market, but a metal core golf ball?

Enter OnCore golf’s new ball to the market with that very idea, the OnCore Evo.

OnCore Golf brings you the world’s first and only patented hollow-metal core golf ball. We understand that in golf, hitting the ball straight is paramount to scoring lower. “We have designed a ball that helps you do just that and makes your game more competitive as a result.”

The EVO should enhance the experience and lower the score for anyone who uses it. We can’t all hit perfect fairway shots or putt like the pros but this ball narrows the gap and will have you enjoying your game more and more.

The proprietary alloy used in our hollow-metal core combined with ultra-high performance polymer composite blends in the mantle layer shifts the ball’s weight to the perimeter, increasing the Moment of Inertia and reducing sidespin. The result is a straighter drive, more accurate iron shots, and laser-straight putts.

Instantly when I heard METAL CORE my mind went into overdrive with a mixture of disbelief and intrigue. In theory, the hollow metal core will actually shift more weight from the center of the ball and further towards the outside, increasing the MOI and dropping sidespin significantly. However, such a radical idea brings to mind a LOT more questions on performance than that of a “typical” golf ball. For the sake of review, it will be easiest to break it down by club selections in order to properly focus on the spin/flight performance throughout the bag. 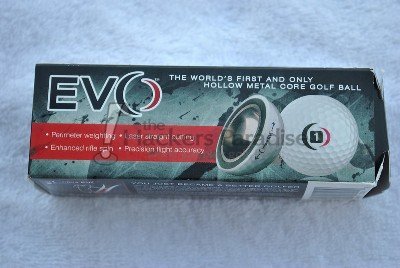 Naturally, with a ball that makes claims of increasing the MOI and drastically reducing sidespin, focusing first on the driver and fairway woods first just makes sense.  I’ve always been able to lose a shot here either way, so the thought of lessened sidespin is definitely intriguing to me. I can safely say I did see significantly less sidespin with the OnCore Evo than my current ball of choice. Even when I tried to move one hard left or right, the degree of movement was significantly less than others I tried the same shot with. Now, that isn’t to say you can’t still slice one hard – it’s just doesn’t end up moving as much as you may be used to. With the decreased sidespin I was actually seeing a slight increase in carry and a definite jump in rollout on the course. It does however bear mentioning here that these produce a much different sound off of the woods than any golf balls I’ve ever used before. Even with some of the best sounding drivers out there it produces a much louder and almost hollow metallic noise off the face. The sound will definitely take you by surprise at first, but for some, the decreased sidespin will more than make up for that. 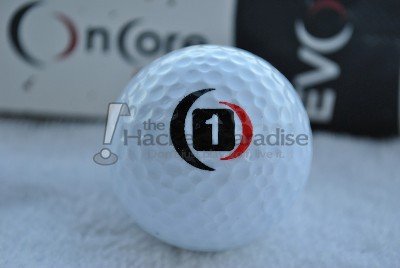 This was an interesting area for me during review. As mentioned with the woods, the Evo’s hollow metal core and perimeter weighting really does take a large bite out of the sidespin. However, while using the ball it also quickly became evident that it reduces all spin, which can produce some issues off the irons and wedges if you aren’t prepared for it. I saw very similar carry distances off the irons with the OnCore than I did with my usual ball and it seemed to want to do nothing but go straight. However, the rollout was much increased. I learned very quickly that shots you may usually get to check up simply do not do so with the Evo. I could definitely play more or less rollout with it, but I had to conscientiously change my shots to into greens in order to account for that rollout, otherwise I landed on the green and right back off again. 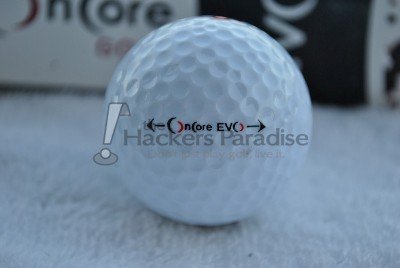 As much as the Evo does its job in seemingly wanting to go straight off of the tee, for me it shined the most on the greens. It became very evident that there really is something there with the perimeter weighting off of the putter. Roll after roll, the Evo immediately took a nice forward roll without skidding and seemed to track to the chosen line extremely well. The consistency of the Evo here, even on the longest putts, was very good, as time and time again it possessed a tighter grouping to the hole. It was definitely very interesting to be able to see the metal core idea work with such a miniature swing/stroke.

I do believe that it is worth noting that in-hand the OnCore Evo does possess a visible seam on the cover all the way around the ball. This really shouldn’t come as a huge surprise since the ball does have a metal core rather than being poured/injected core like most golf balls. 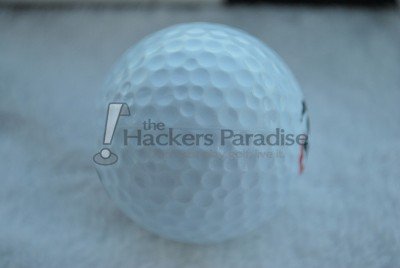 The innovation in the golf industry will never cease to amaze me. The fact that we are now seeing a golf ball with an actual hollow metal core in it is nothing short of mind blowing. Even more interesting is that the ball does what it claims as sidespin is definitely decreased with the OnCore Evo. However, the performance of the Evo will definitely necessitate adaptations to one’s game in terms of their shots with scoring irons/wedges in hand. For some, being in play more off the tee may be entirely worth the sacrifice of more rollout into greens. For others it may not be worth it at all. In the end OnCore has definitely brought a very innovative twist into the golf ball market.

The OnCore Evo is currently available through www.OnCoregolf.com with a dozen retailing at 39.95 and a single sleeve available for 9.99.