The name Orlimar is far from a new name in the world of golf equipment. However, some who are relatively new to the game might be hearing of Orlimar for the first time. The company has been around for a while and enjoyed some great success with the “Tri Metal” line of metal woods in the early 2000’s. I vividly remember when the original Tri Metal first came out. In my opinion, it was a club that changed the game for fairway woods in the future. 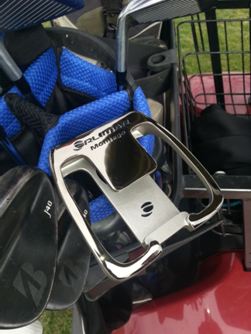 I haven’t heard a lot from Orlimar since probably 2005 or so, but lately we’re seeing a new push from the company. It seems that they are once again ready to get their names back near the top of the golf equipment mountain. THP was sent one of their new putters, the Orlimar Montego, for a full review. 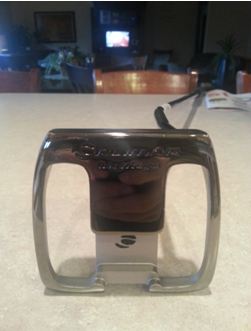 My very first thought when I opened the package was that the look of the Montego was definitely unique. The finish of polished chrome with a duller satin finish does work very well. The milled face also has a great look about it. I was not crazy about the shape of the Montego. The classic blade putter is definitely a minority in this new era of some rather outrageous putter shapes. I’m not saying the Montego is outrageous by any stretch of the imagination, but it is certainly unique and it stands out when you look at it.

As I usually do, I immediately unboxed the putter, dropped some balls down on the carpet of the living room and rolled some putts with it. My first impressions of using the Montego were similar to that of the appearance. I liked how it setup behind the ball. It seems to setup perfectly and ready for action, but it was the sound that I wasn’t in love with this time. I’ll get into details a bit later on, but the loud and high pitched ting is not my favorite sound for a putter to make. 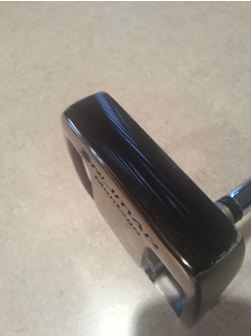 Playing golf with my buddies is how I prefer to complete just about every review that I do. There are a couple reasons for that. One is that my close group of golf buddies know my game very well and they can tell when a product works or doesn’t. Another reason is that I like to involve them in the reviews if at all possible. This is exactly what I did with the Montego. I replaced my current gamer with the new Orlimar putter and played some golf.

Testing the Montego was completed over multiple rounds of golf. The first thing that I took notice of was that it was very easy to align my body and my stance to my intended target. The oversize mallet head of the Montego sets up great behind the ball and it really makes it simple to get the ball rolling on your intended line. Unfortunately for me, this is about where the positive comments end. Again, the sound of the putter is, in my opinion, bad. It is rather loud, high pitched and tingy to my ear. Sound often directly correlates to feel for many people, but I will say that the feeling I got was a lot better than the sound. The CNC milled face is good and I was impressed with the feel, but I think the overall shape and design of the putter does not really seem to fit with the face. To me, this shape would work better with an insert or something behind the thin wall to soften the sound at impact.

Another important quality of a putter is distance control. I look for a putter that can get the ball rolling without having to take too big of a stroke. This is an area that I would expect an oversized mallet such as the Orlimar Montego to excel in. However, I continued to see putts come up very short. The effort needed to get the ball to travel the proper distance continually threw me off while using the Montego. This is definitely very subjective to the golfer so I will not say this is a negative on the Montego, I just personally prefer the ball to come off the putter face a little hotter than what I experienced here.

As I mentioned, I like the finish on the Montego. I think the polished chrome, milled face and satin finish really makes it stand out. I do not like the shape, but that can be said about many putters on the market. I’m more of a traditionalist with my tastes in putters. There definitely is a market for oversized mallet putters – we wouldn’t see nearly this many on the racks if there wasn’t. I liked that it was easy to line up putts with the Montego as well. Unfortunately, that did not lead to my making more putts with the Montego in the bag.

As I mentioned I tested the Montego over the course of multiple rounds with friends. My friends who used this putter had varying tastes in shapes, yet most agreed that this shape wasn’t something they could see themselves using. Orlimar is definitely trending in the right direction and I hope they continue to put out new offerings. In researching their line of clubs and putters I see quite a bit that appeals to me. Retail price on the Montego is $149.