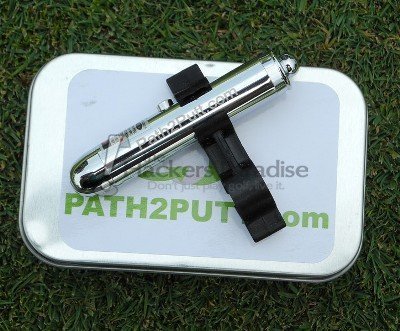 Path2Putt, a small laser device attached to your putter’s shaft, is a training aid designed to give direct feedback on your putting stroke. Today, I’ll be sharing some thoughts I gathered from using this unique gadget over the last few weeks.

Product Details from the Company

The Path2Putt laser is a revolutionary training aid that will show golfers how to keep the putter on path during the putting stroke. Attach the laser to your putter and try and move the laser image, a red dot back and forth in a straight line. The training aid is based on the theory of arc putting. What’s in the box? One brass laser and one clip to attach the laser to the putter. The laser comes with 3 batteries installed and as a back up we have also included a second set of batteries. Also included are instructions on how to use the training aid.

Path2Putt came in a sharp looking case, reminiscent of a tin of Altoids. Inside was the device, along with three extra batteries. The device itself is quite small, weighing less than an ounce, with a sturdy feeling metal casing. It has a bullet shape and a very small profile. The attachment clip is made of plastic and has a little give to it, enabling it to stretch for a tight fit on the putter shaft.

I tried Path2Putt on a number of different putters, including the 40 inch long Odyssey Tank and it worked well with each one. Installation was pretty simple and is best described in the video below, taken from the company’s website.

The concept behind using Path2Putt is simple. After installing, turning on, and adjusting the laser pointer directly in front of the sight line on the putter, the goal is to make a slightly arced stroke that allows the laser to travel perfectly straight back and forward. The easiest way I found to ensure the path the laser traveled was perfectly straight was to take a cue from the video above and line it up with the planks on my hardwood floor. I also found that it worked on a rug that had straight lines as part of its design and by putting a piece of masking tape on my indoor putting surface. 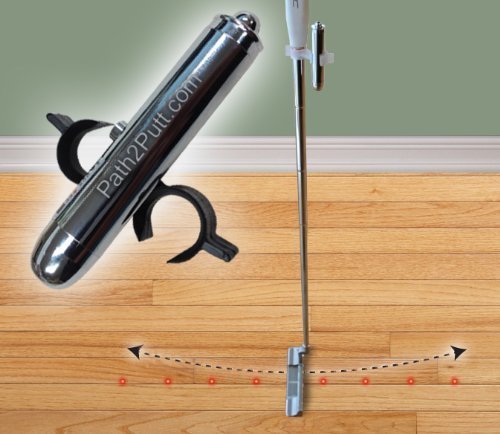 It did take my mind a little time to wrap itself around how the Path2Putt worked with an arced stroke. I couldn’t figure out how an arced stroke related to a laser pointer traveling straight back and through, but it did. Moving the putter either too far inside or outside the line caused the laser to stray offline, as did attempting to manufacture a “straight back/straight through” stroke. For years, the biggest flaw in my putting stroke has been an over-exaggerated arc and the Path2Putt pointed it out on the very first stroke I took while using it. It was quite handy to see my performance in real time and make any needed adjustments, while feeling and seeing what the correct stroke path was.

As valuable as that feedback was, the Path2Putt does have some limitations. First, it’s really not ideal for use outside the house. In theory, one could use it on a practice green, but the need for a physical straight line to compare the laser’s path with would necessitate something like drawing a chalk line on the grass. As such, it’s probably best saved for use inside your home. Also, Path2Putt is designed for practicing the putting stroke, but not while using a golf ball. I wasn’t aware of this at first, but quickly found the two were mostly incompatible. The laser actually points down and hits the golf ball, making it difficult to get a good starting position. In addition, following the laser back and forth made it difficult to concentrate on actually putting the ball. My suggestion would be to use the Path2Putt for dry runs, trying to ingrain the feel of the correct stroke, and then take that feeling to your normal putting practice routine.

The easy installation, small size, simple instructions, and reasonable price make the Path2Putt an attractive option in the very large training aid market. It’s capable of offering instantaneous feedback on your stroke path and allows you make whatever adjustments you need to on the fly. I will admit that using it became a bit monotonous after a while without having the option to actually putt the ball in the hole, but there is certainly value there while used in concert with traditional practice methods. For more information, you can head to the company’s website at www.path2putt.com.