Hybrids have had a huge impact on the game of golf for well over a decade now. When first introduced they were developed as a replacement for long irons, something easier to hit that would allow the ball to get up in the air and offer more forgiveness. Somewhere along the timeline hybrids started to get engineered more towards distance, as opposed to just that iron replacement club. PING has now decided to take the knowledge gained from hybrids over this time frame, and mold it into the face of an iron to provide a more true long iron replacement with its newest club the Crossover G. 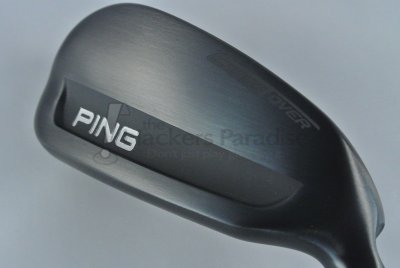 This breakthrough design creates a new club category to combine the precision, workability and control of an iron with the speed and forgiveness of a hybrid. It’s not a driving iron; the Crossover is far more forgiving, higher launching and more versatile.

A cascading internal sole involves the entire face, sole and top rail in flexing to maximize distance. Extreme heel-toe weighting helps locate the center of gravity low-back and expands the perimeter weighting to create a high MOI across both axes for maximizing forgiveness.

Cast aside any thoughts about the look of the Crossover G, and what you will find is a club that does indeed carry a good amount of technology. The technology for this club starts with something that will catch a player’s eye almost immediately, and that is the face. Most hybrids these days tend to have a face that mirrors more of fairway wood design with some bulge and roll. The Crossover G brings with it the face of an iron made with 455 Carpenter Steel. PING has traditionally used 17-4 stainless steel throughout their lineups, and by switching to Carpenter Steel they are finding faster ball speeds thanks to a thinner face that offers more flexibility upon impact. By going with an iron style face, PING has said that players will be able to have more control and have the ability to work the ball in an easier fashion than they would with a hybrid. 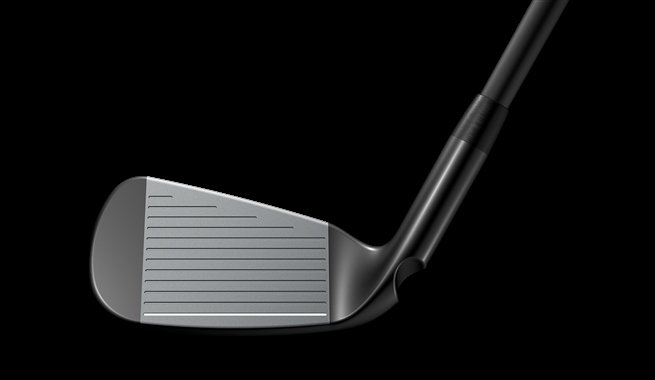 To help raise the level of MOI for a club of this size, PING has done a few different things to adjust the internal weighting of the club. First, they have stretched the leading edge back, providing a wider sole and therefore pushing the center of gravity (CG) further back from the face. With the CG back, PING then adds what they are referring to as Extreme Heel-Toe Weighting. Pushing weight to the opposite ends of the construction helps provide a more stable clubhead and will provide more forgiveness, or ball speed retention, on shots struck away from the sweet spot. As one can probably start to figure out where the Crossover name is coming from, with pushing the weight low and back and then combining it with the iron face that was mentioned above, the idea of a hybrid style body to go along with the shot making capabilities of an iron. 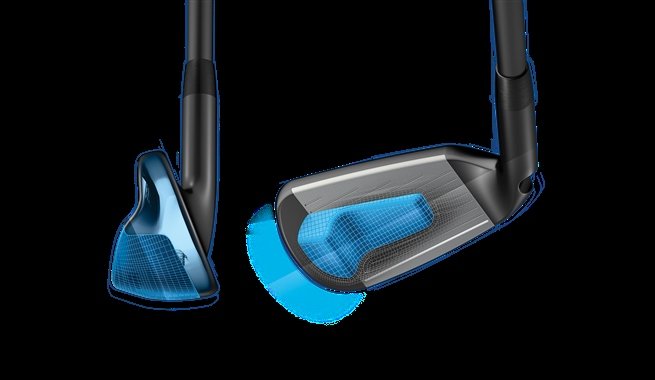 Having already touched on the extra ball speed and rebound effect that is produced from the Carpenter Steel face, there is one more inner structure that helps make the speed and forgiveness possible, and PING calls it a Cascading Internal Sole. This design element works in a way that when contact is made on the face, the force of that hit is received all around the frame of the club. The outer rim and sole of the club equally take in the power caused by this collision and properly flex to produce a shot with increased velocity, which helps achieve a stronger ball flight and more distance. 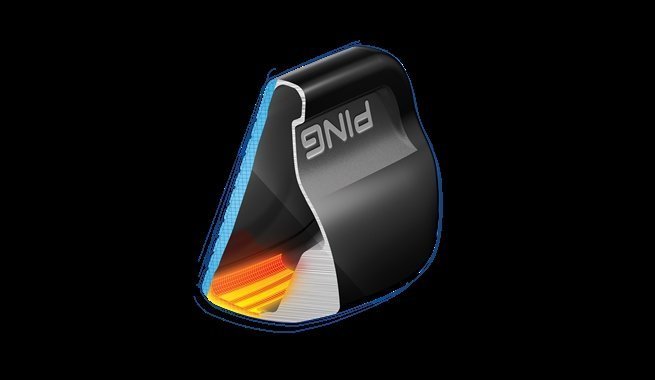 The looks of the Crossover G are overall pretty simple. There are no flashy bright colors, but instead a nice black-gunmetal type finish. The head itself takes a minimalistic approach when it comes to paint fill giving it an understated yet pleasantly simple look. The sole of the club is rather wide, and those who set up for a shot will notice the back of the club before pulling the trigger. This is probably not a big deal to those who tend to play a lot of hybrids or even wider soled irons, however a player who normally plays thin soled clubs or a 3-iron, might be taken aback by seeing the back of the club at address. Keeping up with the PING tradition, the Crossover G does indeed have a notch below the hosel which will allow for PING to have the lies adjusted based on their color-coded fitting system. A quick note on that, the Crossover G comes in blue dot as the standard offering. 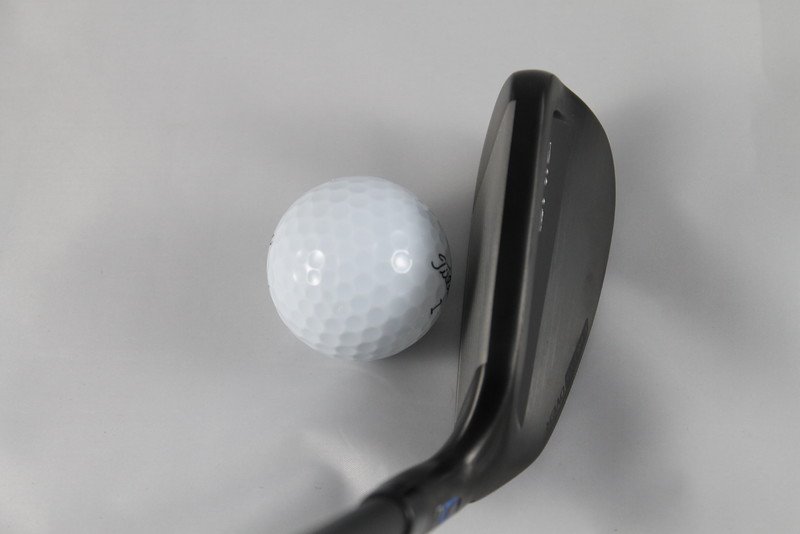 Topping off the package is the inclusion of PING’s new Alta shaft. On the aesthetic side, this shaft pairs nicely with the dark head of the Crossover. The upper portion of the shaft offers a nice blue look to it, keeping it in the same color wave as the G series theme. The bottom of the shaft is a more traditional darker color that seamlessly flows in to the hosel. The Alta shaft weighs in at 69-79 grams depending on flex. Throughout testing the Alta shaft offered what should be considered a more mid ball flight, which players who eye this type of club should enjoy. 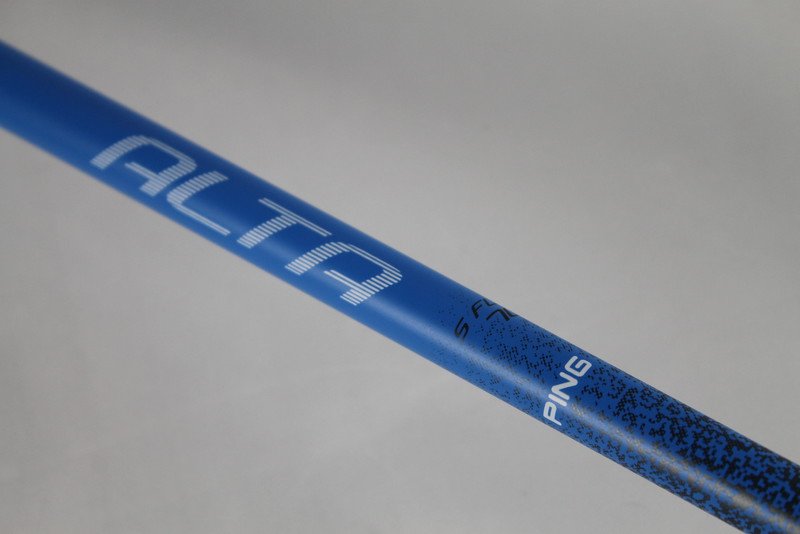 Taking the Crossover G out to the course proved to be somewhat interesting. The model that was tested was a 3 Crossover, which comes in at 18°. According to PING this is a club that should compete for a spot in the bag with a 7-wood or 3-iron.  With testing taking place on the range, in the simulator, and on the course the Crossover G gave a good impression on what it can do, and perhaps who it is targeted at.

Hitting a 3-iron is not the easiest thing to do on a consistent basis for many amateur golfers, hence the rise in popularity of hybrids. Designed to replace a 3-iron or a 7-wood, this Crossover G in 18° had some trouble in achieving both the overall height and distance seen by multiple testers compared to a 7 wood. Comparing its flight and distance to a 3-iron, the comparisons were heavily in the favor of the Crossover G. Even though it flew higher than a 3-iron, it did not reach the heights or distance of a 7-wood. 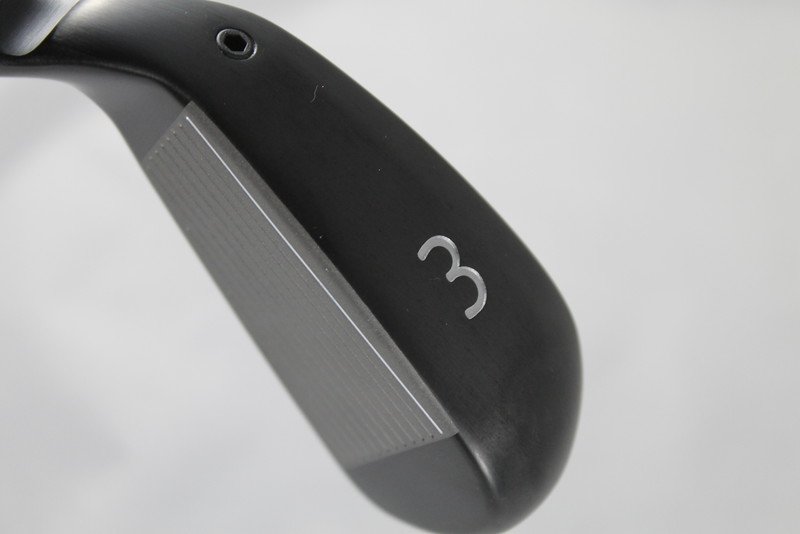 Being versatile is something one might not fully expect out of this club, however it proved to be just that. The Crossover G was a really nice option for tee shots as the ball came off with a more mid-flight, and not a lot of spin. As was mentioned in the technology section, the iron face allows for the ball to be manipulated a bit easier, and doing so off the tee became a nice bonus feature. The other somewhat surprising area in which the Crossover G proved to be useful was in the short game. Bump and run shots were much more simplistic with the Crossover, and thanks to the design of the wide sole it almost completely removes the possibility of catching a chip shot heavy. Both of these shots are dependent on the player’s comfort level and playing conditions. 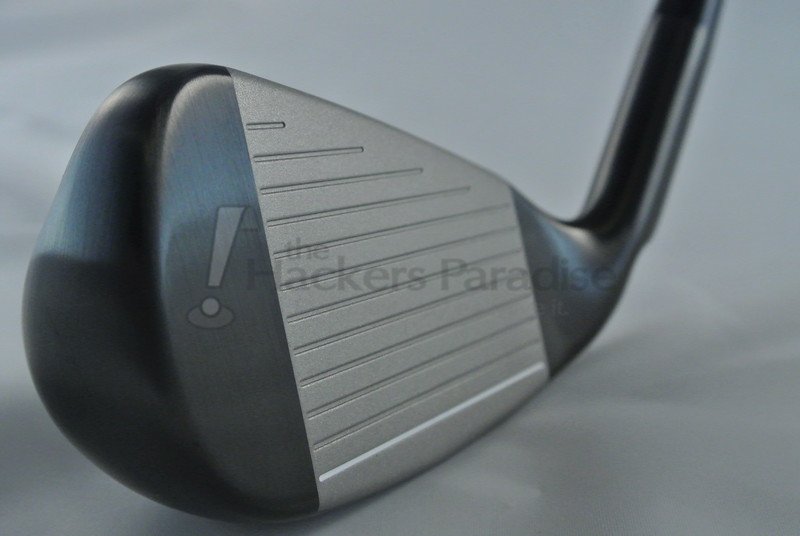 Has PING created a new category for the equipment world? They have, even if only for them. In a market that has different styles of hybrids and utilities, the Crossover G does offer some uniqueness, although falls short of being in a category by itself. Whether or not that part actually matters is a moot point, as the Crossover G aims to offer another solid option out there for golfers who struggle with long irons and/or hybrids. When it comes to the 3-Crossover, stronger swingers may be more attracted to this club as they will most likely see the most benefit out of it. The interest level grows more at the thought of a higher lofted option, as something that more golfers could possibly benefit from. For those interested in adding this club to their bag, they are now available for purchase for $229. More information on the Crossover G can be found at www.ping.com.