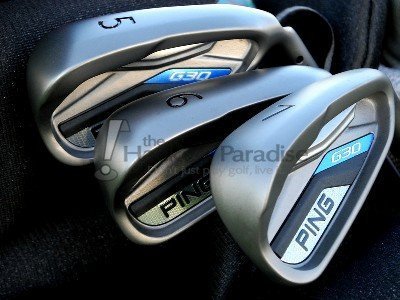 Compared to the bold and unique looking metalwoods in PING’s newest line, the G30 irons impart a much different reaction in hand. Lacking the audacious selling points that turbulators and Bubba Watson’s firepower bring, they instead offer modest changes from the G25’s. Rather than a complete redesign, the G30’s are a progression of what is arguably PING’s flagship iron line that should be quite popular with fans of past offerings.

Info and Key Technology from PING

Progressive lengths and lofts and a thin face will help you launch the ball high yet significantly farther, while still providing the added control you need to consistently attack the flag. Faster ball speeds are provided by a Custom Tuning Port that sits very low and supports a thin face. The CTP and a low-back CG optimize launch and forgiveness while ensuring a solid feel. Slightly longer heads also boost MOI, and a new sole design ensures solid contact. 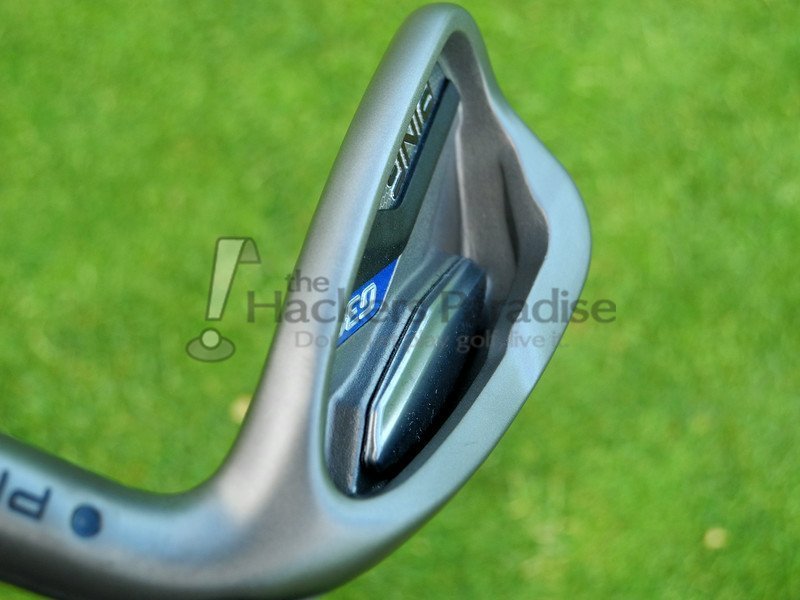 Situated low in the sole, the CTP structure helps lower the CG to ensure high launch with forgiveness, and it supports a thin face to provide distance control and a solid feel. The soft elastomer badge enhances feel and sound in the perimeter-weighted design.

The thin, 17-4 stainless steel face maximizes deflection for faster ball speeds and is backed by a CTP cavity that optimizes the CG and elevates MOI. The cavity is undercut to save weight and allow for a low-back CG to improve launch conditions and increase forgiveness. 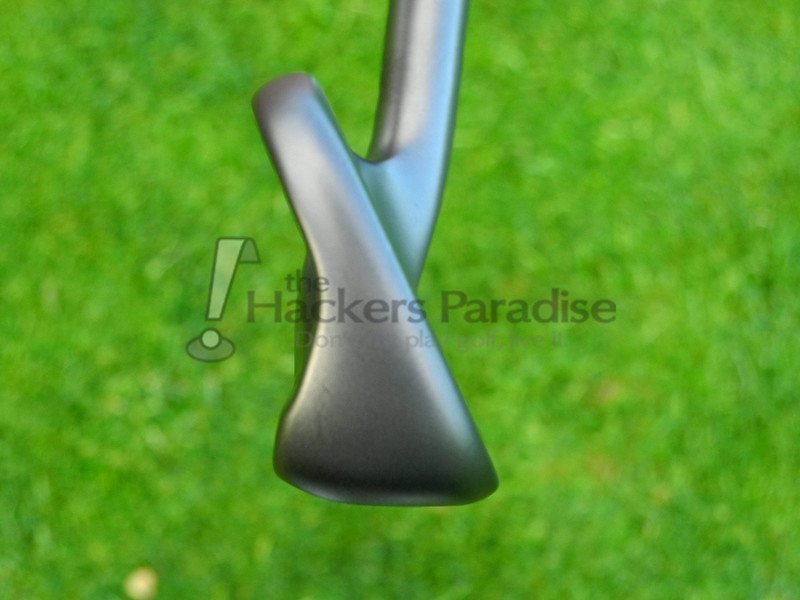 A softer lead-edge radius and precisely calculated additions to the bounce profile ensure a smooth transition through the grass with a stable head, which adds to forgiveness, especially on off-center strikes. This versatile sole design is engineered to perform well with any angle of attack.

Progressive offset generates higher ball flights in the longer irons and penetrating, controlled trajectories with the scoring clubs. Slightly longer blade lengths increase forgiveness, most noticeably in the 4 through 7 iron. 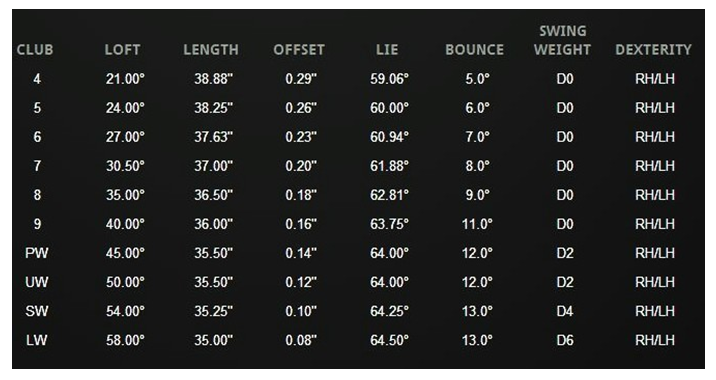 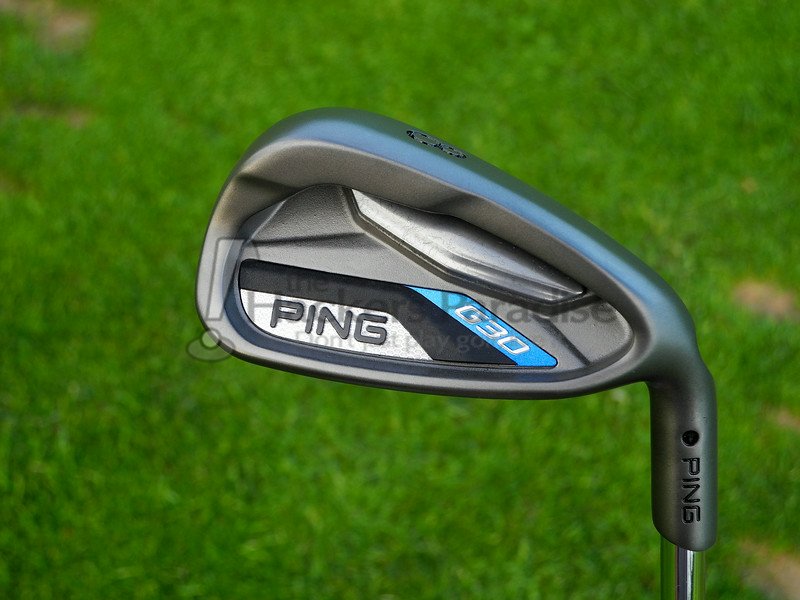 Those intimately familiar with the G series irons of the past, especially the G25’s, will find a seemingly identical looking iron in the G30’s. Carrying over some of the aesthetic changes that were very popular in the 25’s, the newest PING offering only differs visually in the badge color. The slightly thinner (in appearance) topline and smoky black finish remains, and rightfully so given the praise that both received last year. Also remaining is the rather large amount of offset that the G series is known for. Though there were rumblings that the G30’s have less offset than their predecessors, PING’s own specs show otherwise. 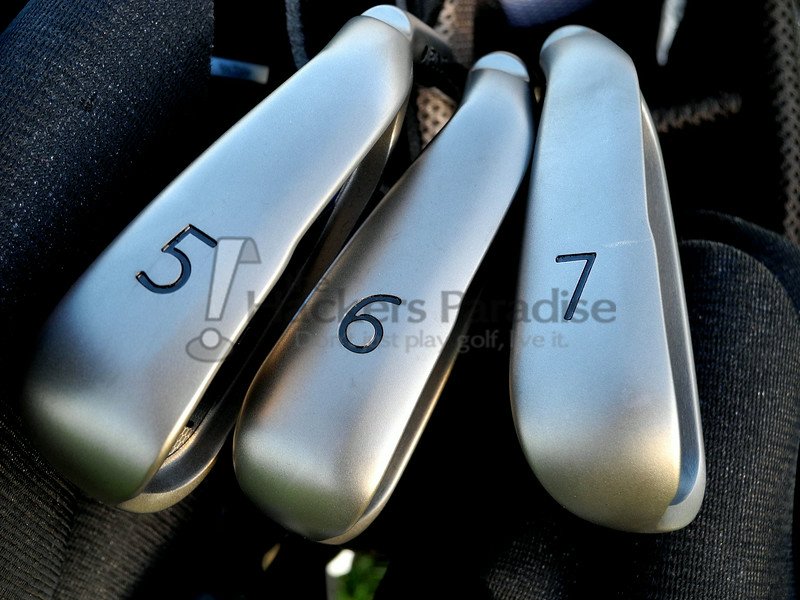 A redesigned sole (see technology section for more detail) also serves to differentiate the G30’s, though even that change isn’t something that most will notice. Regardless of the quantity of changes made to the new irons, the blue color scheme is definitely pleasant to look at and in ways seems like more of a radical change for PING than it really may be.

In hand, the G30’s feel quite light and unsubstantial, a natural effect of their rather low D0 swing weight. While this is a recurring theme with the G series, it is somewhat unusual when compared to many similar irons on the market. Some may not notice the difference at all, but those that are more sensitive to swing weight most certainly will.

The Elastomer Badge and CTP both function to enhance/improve feel, but nothing in that regard stood out as overly desirable during testing. While certainly acceptable, the G30’s aren’t what one would classify as a great ‘feeling’ set of irons. They do very well to eliminate harshness both low on the face and towards the toe, but seem to lack that solid or soft feeling that some users crave. However, those that are familiar with and enjoy PING G series irons will likely find an instant comfort level in the G30’s.

The G30 irons were tested using a Vector X launch monitor, on the driving range, and on the golf course in the Black Dot, 4-LW configuration with the CFS Distance shafts in stiff flex. 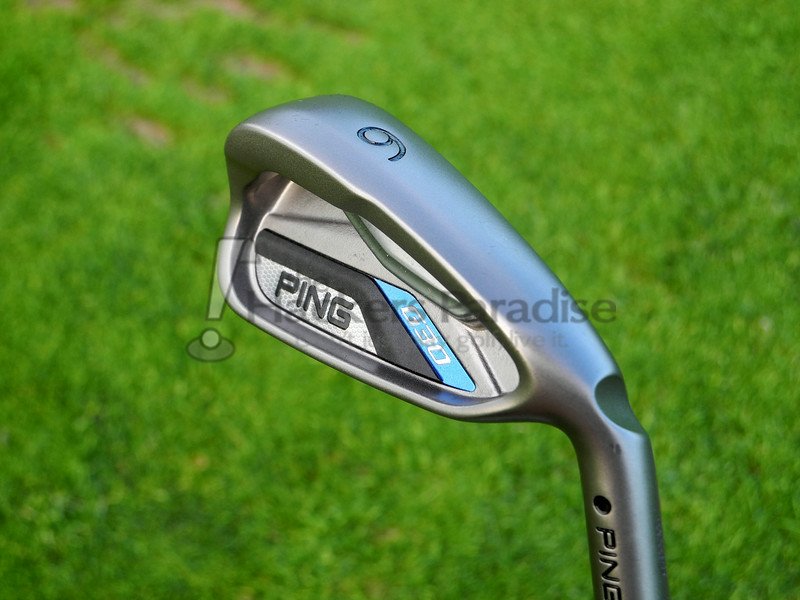 Testing of the G25’s showed that while comparable to most game improvement irons, they weren’t quite able to keep up with the leaders of the segment. This proved to be the case for the G30’s as well and launch conditions were virtually identical aside from the longer irons. The very wide sole and thin face launched the ball quite high as one would hope and produced higher than average spin numbers, similar to the irons they replaced. The result was a slightly higher peak height and slightly shorter distance numbers for the reviewer. For some, this combination could certainly provide more distance, showing the importance of fitting or demoing. 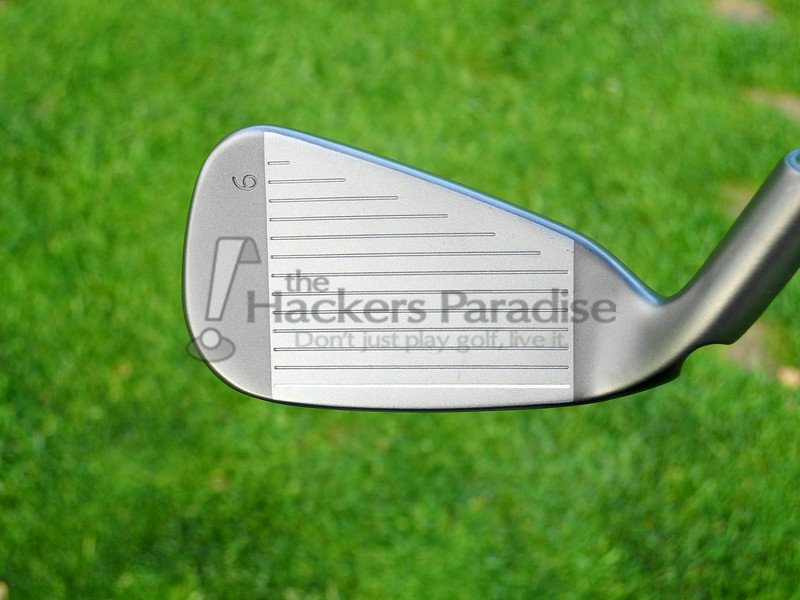 The main difference noted in regards to distance with the G30’s was seen in the longer irons. The set’s lofts are slightly stronger than in the G25’s, as much as 2° in the mid/long irons, and the shaft lengths get progressively longer below the 7 iron. For the reviewer, distance increases were noted in the 4 and 5 iron especially, a solid improvement. This is somewhat unchartered territory for the G series irons. Though they’ve been the most recognizable ‘distance’ iron in the PING lineup, the company still kept a relatively conservative approach to loft and shaft length. Though some will certainly find cause to complain about this, it was a positive change for the reviewer and certainly will be as well for a large number of consumers. 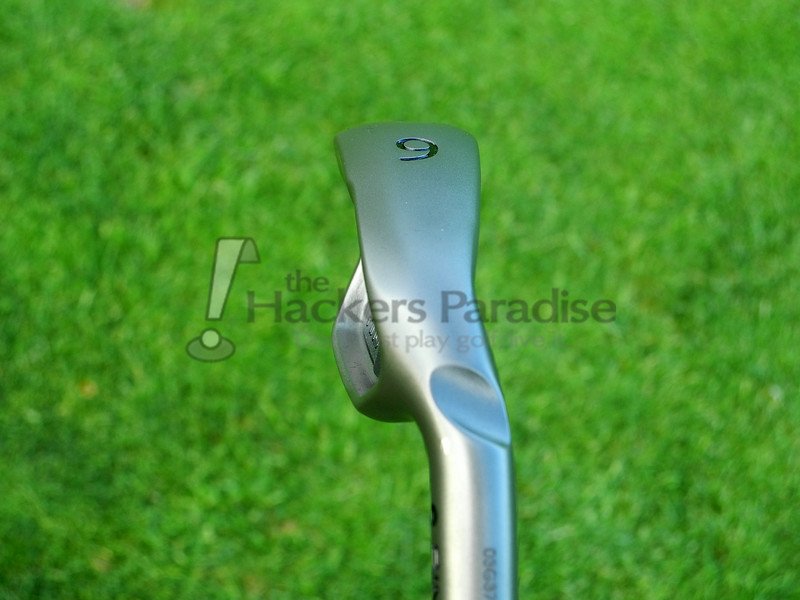 The G30’s undoubtedly excelled in the forgiveness category as should be expected, with impressive retention of distance on a variety of misses. Similar to many others in the wider-soled game improvement category, they handled low face misses exceptionally well with both trajectory and distance. Toe side misses also fell just short of center contact shots, even on relatively large misses. This again is reminiscent of the G25 irons, with performance being virtually the same to the naked eye.

The redesigned sole, with its beveled/softer leading edge also assisted with forgiveness on heavy misses, as it didn’t want to dig into the ground as much as it wanted to glide into the ball. That’s worth mentioning since it is a common miss among the average golfer.

Compared to the Karsten irons reviewed earlier in the year, there was a modest drop-off in forgiveness with the G30’s, which is understandable since they are not a max-game-improvement design. It should be stated that the difference in aesthetics between the two sets is not so severe that the gains in forgiveness would be overshadowed. Though not carrying the famed G series name, the Karstens still seem to rule the forgiveness roost with little visual expense and are certainly worth a strong look if one is considering a G30 purchase. 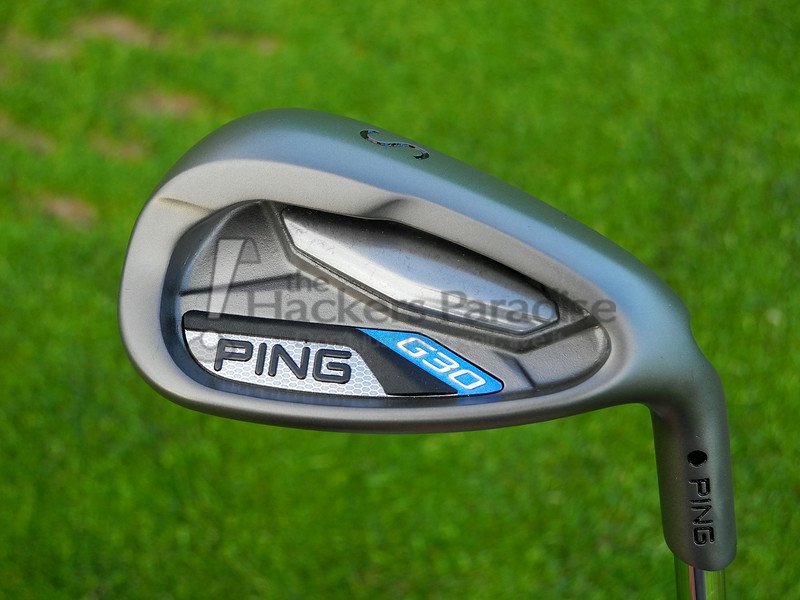 Like with many of their iron sets, PING does offer both sand (54°) and lob (58°) wedges in the G30 iron set. Similar to aftermarket wedges, they are heavier in the head than the irons and feel quite well balanced. They offer the same wider sole and large cavity that the irons do; making them very good options for the player that takes full swings with wedges and misses the center regularly. Testing showed that for pitch shots and partial swings, the G30 wedges also performed very well. Consistent distances and reasonable spin rates were easy to obtain. 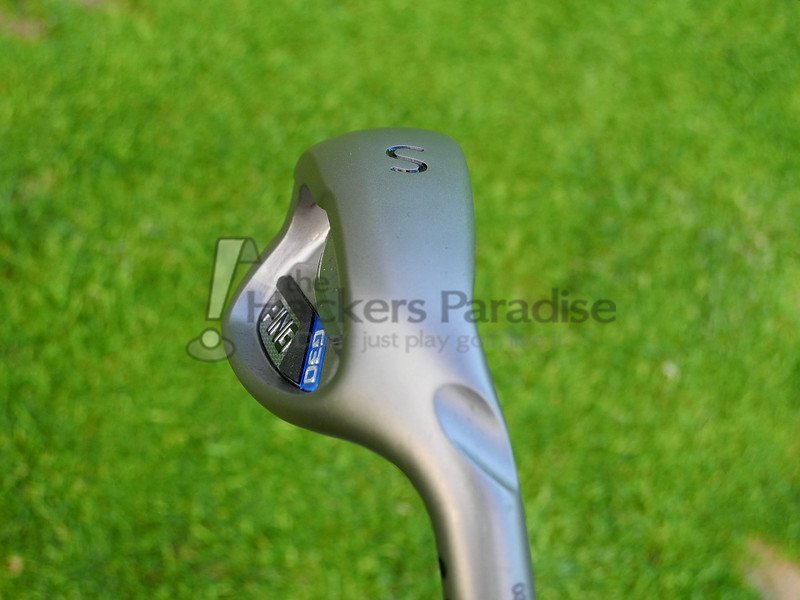 The added forgiveness does of course come at a price however, and the price in the case of the G30 wedges is a lack of versatility and options. With only one bounce angle offered (13°) and the very wide sole, opening the club for both sand and greenside shots wasn’t quite as easy to pull off as with an aftermarket wedge. The decision to include these wedges in a purchase will very much depend on how one uses wedges and an honest look at one’s proficiency with them.

Those consumers that own and enjoy the G25 irons can relax with the knowledge that there is little to gain by upgrading to the G30’s, though there were some enticing improvements to long iron performance noted. That being said, those consumers in the market for a new set of irons, especially those that are PING fans, should certainly take the time to demo the G30’s as soon as possible. By carrying over some of the same visual improvements from last year, golfers with a set like the G15’s should like what they are seeing. The modern distance iron elements that have slowly been incorporated into the series should also prove to be quite popular with those using an iron set from four to five years ago. More information on the G30 irons can be found at PING’s website, www.ping.com.