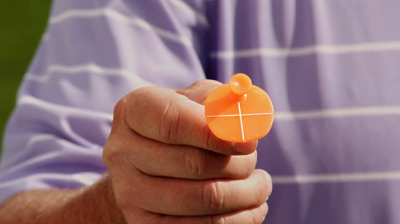 Few training aids can truly fit in your pocket, but Tee Square certainly does. It’s a simple device that provides visual feedback on both alignment at address and body movement during the swing.

Get that sway out of your swing.

In the package that THP sampled were four Tee Square tees – two each for driver and irons/hybrids. The only real differences between the two versions are the length of the spike on the bottom portion of the tee and the shape of the disk. The place the ball sits is the same on both – about ½ inch or so above the disk with a smaller cup. 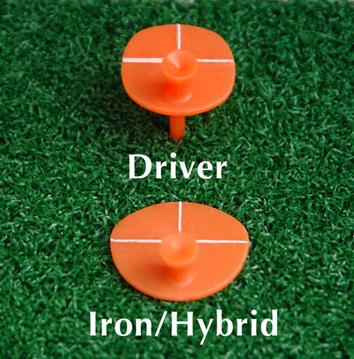 A future improvement would certainly be either a larger cup for holding the ball or something similar to what many ‘performance’ tees are now doing, as at times placing the ball securely on the tee took a try or two.

The disk is the portion of the Tee Square that makes it different than anything else and features perpendicular intersecting lines to promote correct aim and alignment. Assuming one is set up correctly, the ball will hide the disk from view at address. In addition, limiting movement during the swing will keep the disk hidden from view. The point of this of course is to help the golfer recognize (and ideally correct) swaying back and forth during the swing. As a recovering swayer, the tester found quite a bit to like about the premise behind Tee Square. Those familiar with this dreaded fault know that it contributes to a number of terrible results, including inconsistent contact and ball flight, not to mention lost swing speed.

In practice, testing showed that one really had to put an exaggerated sway on the ball to reveal the disk on the backswing. It almost felt impossible to get the body moved that far off the ball, but in reality there are most likely a great number of golfers out there that would be able to do so, whether they realize it or not. The need for a more exaggerated move to reveal a sway means that Tee Square is probably best for those struggling mightily rather than those looking to tighten up a small amount of movement, but individual results will vary

Movement in the downswing was of particular interest, since staying behind the ball is another important part of a good golf swing that many struggle with. However, for the reviewer especially, it was very difficult to keep focus on the tee long enough to know if the orange disk showed or not. The downswing just seems to happen so quickly that it was difficult to focus on something so small. Again, we all see and experience the swing differently, so some may find it easier to focus on than others.

Tee Square seemed to work best with the driver and fairway woods because of the height at which it sits. The approximately ½” tall spur where the ball sits just seemed a bit high for comfortable shots with irons (and even hybrids at times). Ideally, future versions would address that, though it does bring the moment of impact closer to the disk, which could possibly damage it. It should be noted that no damage occurred during testing however.

At $9.99 for a package of four tees, Tee Square certainly won’t break the bank and could provide visual reminders on both alignment and movement during the swing. It falls more into the category of ‘feedback aids’ because it doesn’t really provide instruction or assistance on curing any faults. In conjunction with lessons it could be helpful to those that are working to limit the dreaded sway. More information on Tee Square can be found at www.golfinnovations.com.

Taking an Electric Caddy Off Course