As a self-proclaimed putter addict (read: hoarder) there is little in this job that gets me as excited as when a putter comes in from a smaller and/or newer company. Pyramid is a company with a plan in terms of their product and how they believe their design can truly help golfers be more consistent on the greens. THP was able to get their mid-mallet design named the AZ-2 in for a closer look. 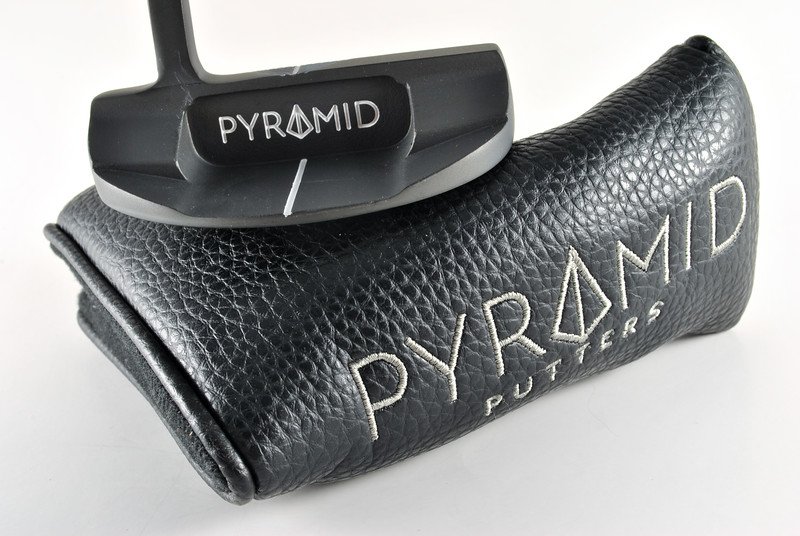 Pyramid on the AZ-2 Putter:

The AZ-2 Mallet putter is a clean looking mid-size mallet with smooth lines. The mid-slant neck creates a half shaft offset with a slight toe hang. We would all like to think we the take putter straight back and through; but the fact is that the majority of golfers have an arc in their stroke and this mallet with toe hang will help you make consistent stokes.

The AZ-2 is referred to by Pyramid as a mallet offering, but in reality it’s more technically a mid-mallet design. The shape is going to be fairly familiar to most as it is in my opinion based on the Anser style with an elongated and rounded off rear flange for the added width. The decision to go with a slant-neck was a bit unexpected as it is much more typical of smaller putter companies like Pyramid to simply run with the plumber’s neck because of its popularity. That said, the slant accomplished what the company wants and maintains only half-shaft offset and nominal toe hang. At address it sets up well and the shape does well behind the ball with the user’s eye. The alignment system is different, but we will touch on that soon enough. 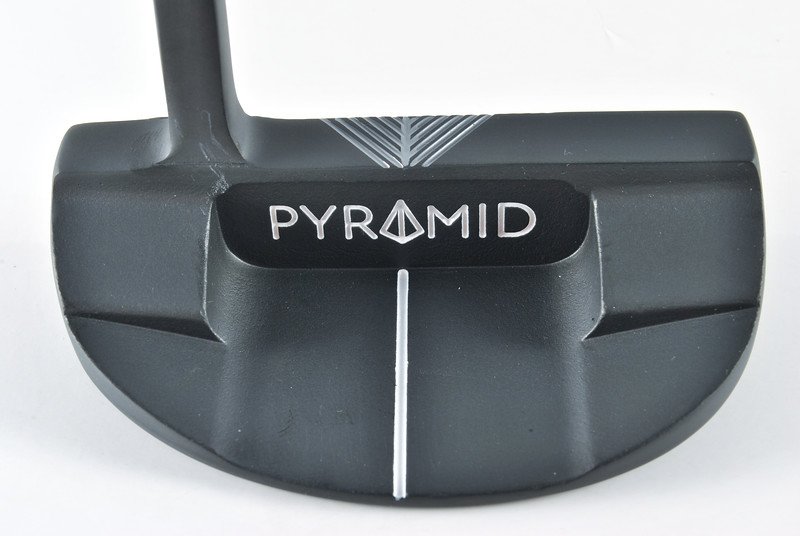 The overall look is very to the point. The sole is a beautifully done polished black with all white paint-filled engravings that lends to the general motif with the four pyramid images.  The simple engraving in the pocket is clean and blends well, but doesn’t necessarily stand out. From address, the remainder of the putter is finished out in a matte black which is great at preventing any glare, and traditionally a classic look. From a distance, it looks quite nice, however up close there are a few little hiccups with the overall finish which a $400.00+ boutique putter line probably wouldn’t get away with, but here at the $279.95 I believe it will be much more accepted by those who get one in hand to see for themselves. It is reminiscent of some matte finished we have seen from some of the major OEM’s in that it just isn’t as refined as others. All said, I’m a big non-gloss finish on my putter’s guy, but if Pyramid had run with the deep black gloss from the sole, I think the aesthetic would be improved substantially. 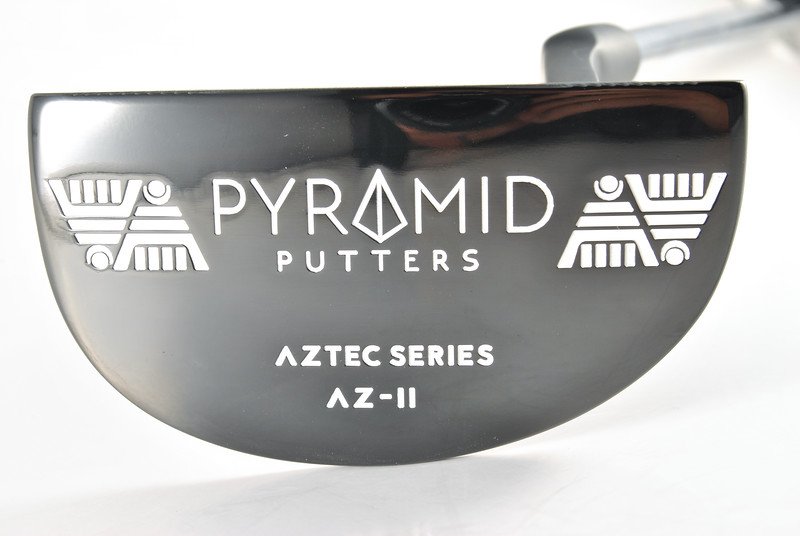 The Pyramid AZ-2 is the prime example of how face milling, and reduction in surface area contacting the ball, manipulates the feel/sound of a putter. The amount of material removed for the face grooves, both horizontal in the middle and angled on the heel/toe side, made the AZ-2 one of the softest feeling/sounding putters that I have ever rolled, let alone reviewed. Regardless of the golf ball used, from a cheap 2-piece to top of the line “Tour” caliber, the feedback off the face was deep, dense, and very muted. I would go so far as saying it feels much more like an insert putter, than a non-insert one. Clearly, personal preference will play a role here though as it may or may not be enough feedback for the individual. 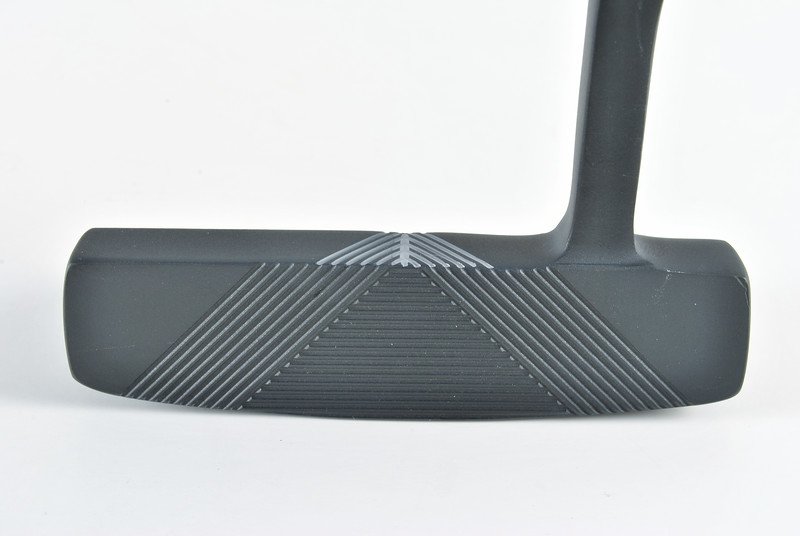 The alignment setup on the AZ-2 is a unique one. It features both a single site line in the flange as well as a “Pyramid” scheme topline aid which the company refers to as the “Tracking Line” with the widest portion of the pyramid actually on the ball side and it narrowing towards the flange. As a one off alignment aid, the Pyramid look actually works well, it’s a bit busy looking, but it does its job and gives clear visible delineation towards the chosen target. The company also pushes that the pyramid on the topline and the single line in the flange should be perfectly aligned at setup (in sync, if you will), however, the only way to ensure this is if your eyes are over the ball. If you subscribe to that thought it works perfect, but if you are a believer in eyes more along the heel line of the putter then the two alignment aids will not mesh up and it could potentially cause some alignment hesitation on the users part. 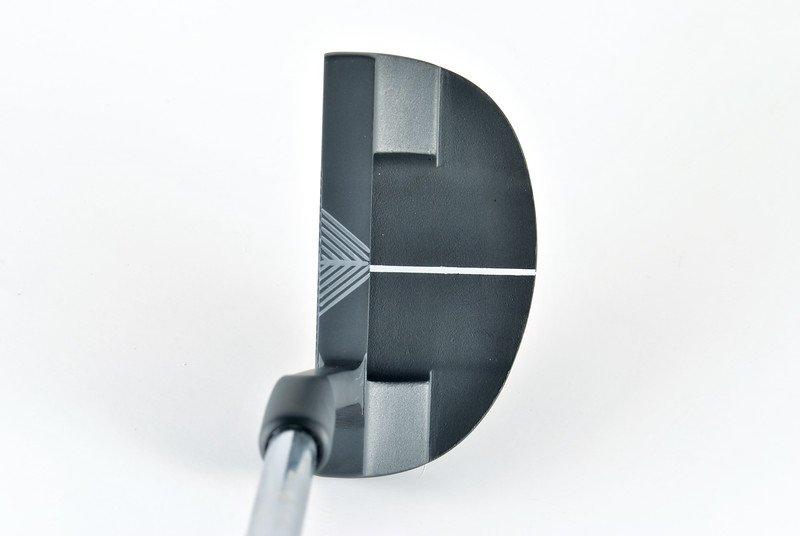 The bigger portion of the story is do the different face grooves do what they claim to do as the company does claim a reduction in dispersion on misses. The claim is that the angle of the face grooves on the toe and heel will help correct the typical miss towards that part of the putter face (toe miss = right and heel miss = left). To test this I put the putter through gate drills so that the putter could be kept the same through the stroke and the placement of the ball in the drill would allow for heel, center, and toe putts. This process showed that though directionally there is some merit to the design where direction is concerned, the distance still proved to be the biggest variable. Now, it was no different than any standard putter face in that regard, but it’s worth noting. Does the milling work? I would say, yes it does for the most part, and more than that though it really does look pretty cool. 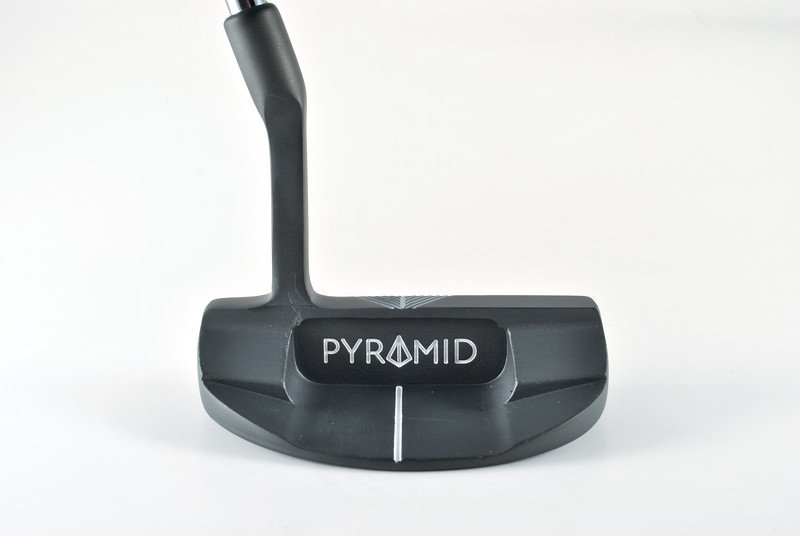 I have said it for years and will do it again here, options are good. Pyramid is a newer putter company with a story, a methodology, and a belief that what they do truly will help golfers out there and that for me is fun to see. Putters are the most personal club in the bag, what is going on here with the AZ-2 may not be for everyone, but the design does have merit and does offer solid overall performance at a price point that, though still high for some, is much lower than the majority of other smaller putter manufacturers. As is always the case, finding the putters to try, will be the key for consumers.

More information on Pyramid putters and all that they do can be found at www.PyramidPutters.com.