Two years ago, THP staff writer Dan did an excellent review of a new device known as the MISIG.  You can read Dan’s earlier review here.  Very little has changed with the device, however, based on the differences between the photos from 2016 and today, it appears that MISIG has improved construction and eliminated several common issues present in the previous iteration.  For example, the clip is now a unitary piece rather than a screwed in piece.  Subtle improvements indicate that the creator is seeking to improve on the device where possible. 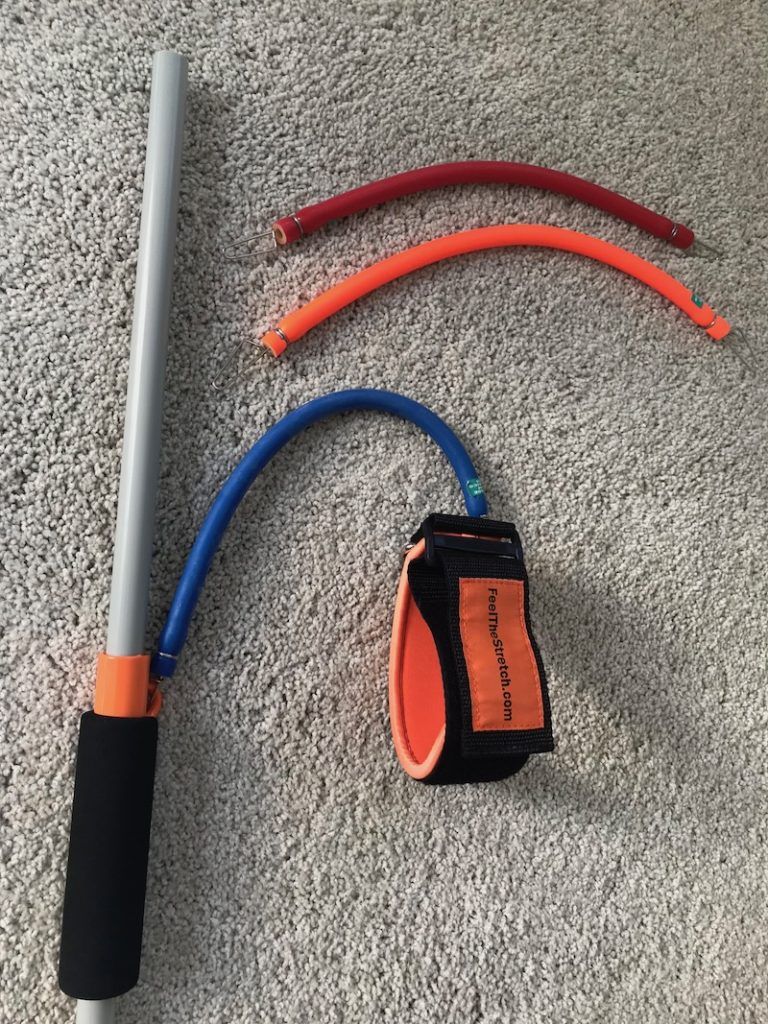 Now that two years have past, we wanted to look back at the MISIG and revisit the device and test the numerous claims that the creator makes.  All of these claims, for better or worse, can be found at https://feelthestretch.com.  I set out on a several-week routine where I used the MISIG nearly every day and I’m happy to report that some of the claims are true – although likely the ones that you would expect.  The whole routine doesn’t require a large time commitment so there are few excuses to not engage with the device.

The MISIG claims to have three independent routines and uses: (1) stretch, (2) exercise, and (3) swing trainer.  Let the games begin.

If you fight an over the top move in your transition, the MISIG can provide assistance by providing the feeling of an in-to-out path.  When you are using the MISIG properly with a full shoulder turn, it is very difficult to start the downswing severely over the top.  The bungee cords and cuff essentially require your path to go in-to-out and going over the top really requires you to fight the device and the bungee cords.  Of course, this will only give the feeling of the in-to-out path through half of the swing and the onus is then on you to replicate everything with an actual club.

The MISIG is a great tempo trainer for the backswing.  I fight a fast takeaway and rushed backswing, but after the MISIG, my backswing was slower.  Interestingly, this change went unnoticed for the first two weeks.  While I’m only guessing at why this happened, I think that the “stretch” routine put me in a gym mentality where I was trying to move very deliberately to avoid injury and to maximize range of motion.  The net result was a slower backswing and better tempo in my swing as a whole.  This was my favorite swing trainer feature but it is noticeably absent from any claim that I saw from the creator (although in fairness this might be what the creator calls  “muscle memory”).

Because your hands separate when you train, I see limited benefits as a true swing trainer.  And if you aren’t careful with your posture and training, you run the risk of your swing becoming overly flat.  After one week of training I found that my backswing was very flat and I never noticed because there was no focus on impact or the rest of the swing.  This issue was easily remedied but it led to a frustrating range session and a little video to discover. 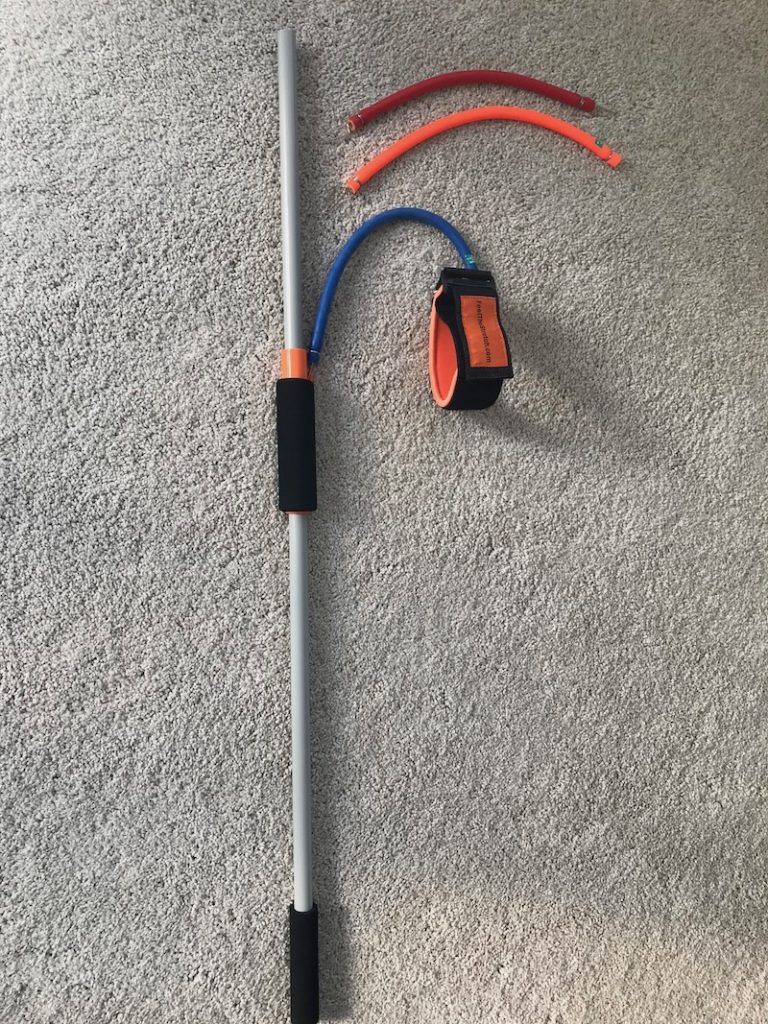 The company claims that that you will have “less fatigue” and will “build tremendous strength” if you exercise with the MISIG.  The company recommends doing the exercise routine 3-5 times a week with between 20-100 reps.  There are three different movements (I won’t summarize but watch the video if you are interested) and each is very similar and works essentially the same things.  After two weeks of trying to exercise with the device I can confidently say I disagree with these claims.  The limited and repeated movement simply was not enough to get my heart rate going or to engage the muscles in a meaningful way.  In my opinion, the fast reps in a specific plane, and with only exercise bands as resistance, failed to prove either less fatigue or any additional strength.  Feel free to tell me that you disagree, but I just don’t see it.

Finally, saving the best for last, I think the MISIG is a quality stretching device and will certainly increase your range of motion and shoulder turn through repeated use.  After consistent usage over several weeks, I found that a full backswing was easier to achieve and hold. The MISIG will certainly give you a good stretch in the places you feel when you take a really big backswing.

In my experience, the stretching routine is the root of all successful changes with the MISIG.  When you are seeking a deep stretch of your back you will inherently move slowly and deliberately.  During these deliberate movements, with a bungee cord keeping your left arm in the proper place, you learn the feeling of a full shoulder turn with a connected left arm and then you HOLD this position to keep the stretch.  What I never realized in the moment was that once you learn this position and what it feels like, you can always replicate this position with your practice swings on the course.  This made the most meaningful change in my time with the MISIG.

One reservation I had with the stretching routine was a sensation the in non-strapped shoulder (right shoulder for right handed golfers).  It wasn’t a pain or true discomfort, but if you have a preexisting shoulder injury this could give you pause because it puts pressure on the joint.  At first I thought I was doing the stretch wrong, but I went back to the video instruction and they want the right arm completely straight in use, which is what puts pressure on the joint, and this could be troubling to some. 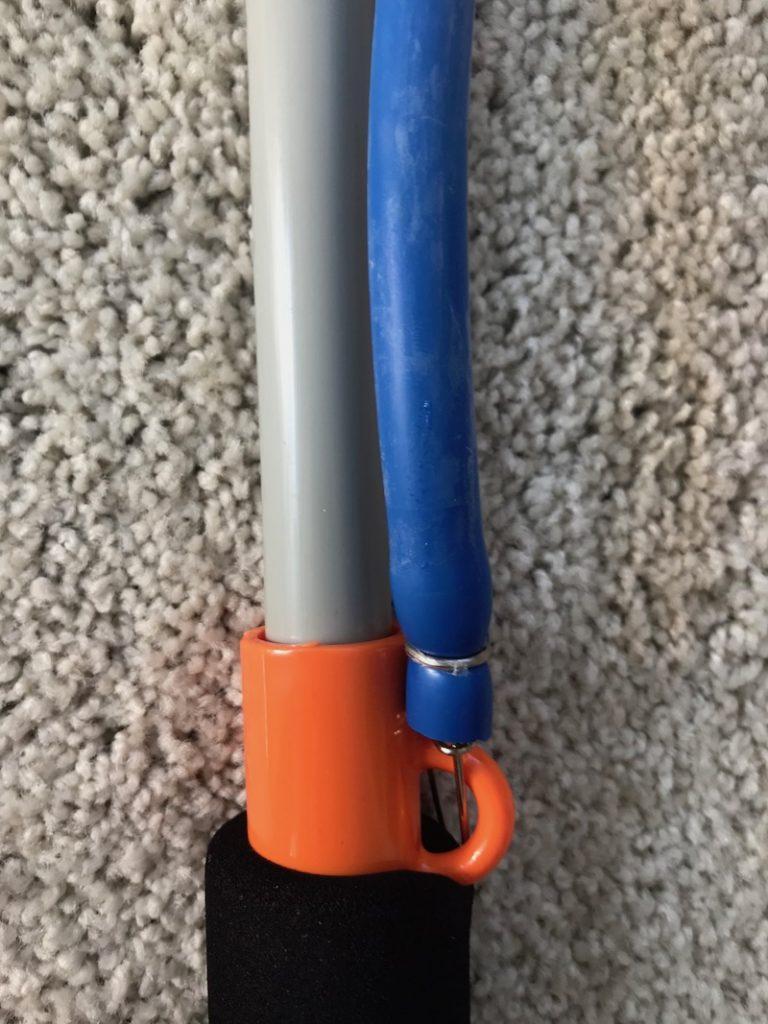 For my swing, the slow backswing lead to a better tempo and lead to my swing being in-sync more consistently.  I also didn’t feel like I was swinging as hard to achieve my full distances.  I largely attribute this to a more full backswing, but I’m not sure how much of that is real as opposed to just feel.  I plan to get my swing on camera in the coming weeks and compare it to my pre-MISIG swing.  In sum, I didn’t hit the ball any farther, but I did feel like my tempo was better and my ball striking improved incrementally after a few weeks with the MISIG.  Although true causation is hard to prove in golf, I had a few great rounds during my time with the MISIG and the device likely helped my progression.

Bring it all home

If you are in the market for an aid that will help with stretching, flexibility, tempo in the takeaway, or assisting in understanding the feel of an in to out swing path then the MISIG is worth a look.  While it will not cure all that ails your game, it could prove worth the money if you have a specific goal and approach it with your eyes wide open.  I think the MISIG is a polarizing device that some will love and some will dislike – if you have tried it, let me know what side you are on.

I’ll continue to discuss my progress and keep the conversation going in the THP forums, let me know what questions you have or what you think, and if you want to give the MISIG a try, head over to https://feelthestretch.com.